Naomi Osaka took charge of her mental health at the French Open. Now she’s partnering with the startup Modern Health 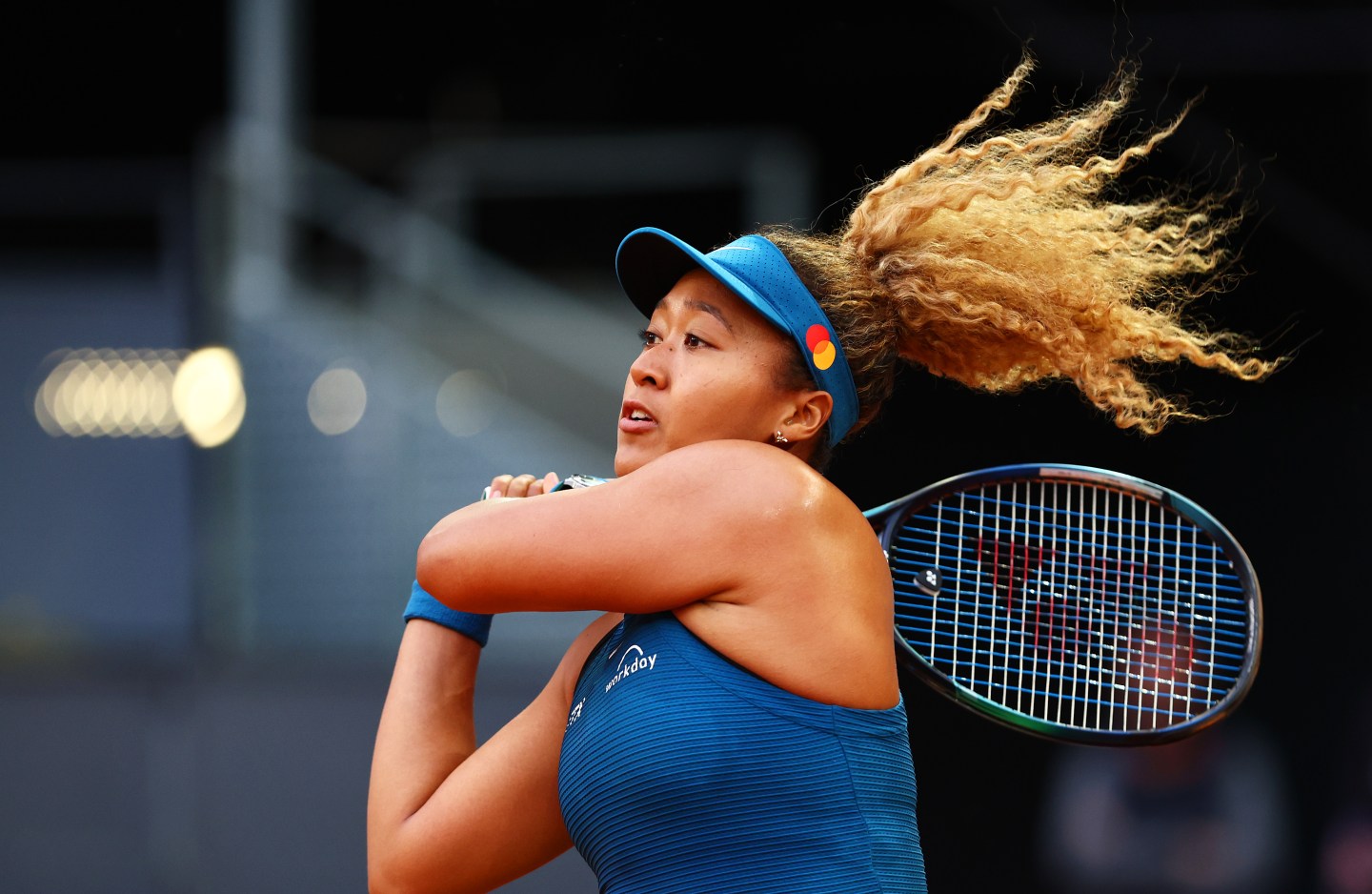 Naomi Osaka plays a backhand against against Sara Sorribes Tormo of Spain during their Round of 32 match on Day Four of the Mutua Madrid Open at La Caja Magica on May 1, 2022 in Madrid, Spain.
Clive Brunskill—Getty Images

Good morning, Broadsheet readers! Connecticut aims to become a safe haven for abortion patients, women’s soccer is back in Los Angeles, and Naomi Osaka is taking care of her mental health. Have a meaningful Monday.

– Healthy competition. It’s been almost one year since Naomi Osaka started a conversation about athlete mental health when she dropped out of the French Open, citing her own mental wellbeing. Since then, the tennis star has spent time prioritizing her mental fitness—she’s started therapy and discovered meditation, Osaka confirms to Fortune.

That personal journey has turned into a business opportunity; Osaka is partnering with Modern Health, the B2B mental health services company cofounded by CEO Alyson Watson. Osaka, who invested an undisclosed amount in the company, will join the business as chief community health advocate and board observer, Modern Health tells Fortune exclusively. (While Osaka is invited to attend all board meetings, Watson says that “given her busy schedule” the board doesn’t expect the tennis star to be present at all of them.) The company, which provides group and one-on-one coaching and therapy services to workers through their employers, is also releasing a meditation offering narrated by Osaka.

This isn’t Modern Health’s first foray into tennis. The company, which serves 335 organizations including SoFi, Pixar, and Electronic Arts, partnered with the Women’s Tennis Association in March for a public campaign in which players discussed their mental health. While Modern Health doesn’t yet provide its services to WTA employees or to players, that could be a next step, Watson says.

Naomi Osaka plays a backhand against against Sara Sorribes Tormo of Spain during their Round of 32 match on Day Four of the Mutua Madrid Open at La Caja Magica on May 1, 2022 in Madrid, Spain.
Clive Brunskill—Getty Images

Osaka spoke to Fortune via email about her new role with Modern Health. The below conversation has been edited and condensed for clarity.

I’m doing really well. It has definitely been a journey, and will continue to be one, but I’ve emerged stronger and happier.

After that event, what steps did you take to take care of your own mental health?

At first, I just wanted some space to be alone but that really didn’t help much. I then spent more time with friends and family, which gave me more comfort and perspective, which I really needed at the time. But the big breakthrough came when I started seeing a therapist consistently and really bought in to the process.

What was challenging about meditation at first?

For me meditation was initially challenging because for some reason the sound of my own breath makes me a little uneasy. I also kept thinking: am I doing this right? My head was full of thoughts. But then I started to understand that there is no right and wrong, and from there the process opened up for me and became more therapeutic and fulfilling.

What is it about professional tennis that is so tough on the mental health of its players?

I think there are a few factors that make tennis especially challenging. Obviously it’s an individual sport rather than a team one, which makes it isolating at times. There is a lot of traveling and time spent away from loved ones, which can take its toll. I think we saw a lot of that especially in the pandemic with “bubbles” and so on. Finally, if you have a draw size of 120 players each week, 119 are going to lose, which can be quite unrelenting.

Are there any steps you believe professional tennis organizations should take that they haven’t yet to help support player mental health?

I think providing a service like Modern Health would be a really great tool for players. From my experience, the last thing I want to do is go in to see a therapist on site at the courts. An option to speak with someone in private and away from the action is much preferable.

Almost a year after discussing your own mental health publicly, how do you feel about the choice to share that experience with the public?

It took me a while to get comfortable speaking in depth about my experiences. Candidly, while I knew I was having problems, I didn’t know what the solutions were, so it felt a bit disingenuous trying to give out advice. Now that I am confident in my therapy and self-help tools, I feel much better about sharing my experience. I really hope I have helped to destigmatize the discussion, especially for young people and people of color.

I haven’t seen a huge change in sport per se, yet, but I have seen more athletes take care of themselves like Simone Biles did in the Olympics. At the end of the day I just hope I have made a small impact and make it easier for people to seek help and talk about their problems. I definitely don’t pretend to have all the answers but maybe I can point people in the right direction.

Speaking of wellness, Fortune is launching Fortune Well, a new health vertical dedicated to helping managers elevate their quality of life. The vertical will provide actionable tips for readers on how to manage stress, stay active, be more productive, maintain better relationships, and make better choices around their own wellbeing. Check it out here.

- Safe haven. Connecticut lawmakers passed a bill intended to make the state a safe haven for abortion patients and providers amid a rash of anti-abortion legislation throughout the country (the latest is a new six-week abortion ban in Oklahoma). The Connecticut law protects people who receive or provide abortions in the state from the lawsuits other states have begun allowing private citizens to file against those who seek abortion care elsewhere. Washington Post

- Better bystanders. In a new op-ed for Fortune, Anita Hill writes that workplace leaders must invest in bystander training to prevent sexual harassment. Empowering employees to intervene when they see harassment happening can create real cultural change in an organization, she writes. Fortune

- Netflix casualty. The cutbacks across Netflix amid the streamer's subscriber and stock decline have reached Meghan and Harry. Pearl, the animated series created by Meghan, the Duchess of Sussex about a 12-year-old girl who encounters influential women through history, was one of a handful of kids' shows dropped by the streaming service. The couple's Archewell Studios deal with Netflix is still said to be moving forward. Deadline

- Angel victory. Los Angeles hasn't been home to a women's soccer team since 2009. That changed on Friday with the debut of Angel City FC, the team backed by Natalie Portman, Eva Longoria, and a cadre of professional athletes. The National Women's Soccer League team won its debut game against the North Carolina Courage. L.A. Times

- Step one. New Mexico will pay for a year of childcare costs for most families in the state (those earning up to $111,000 for a family of four) after expanding eligibility for its childcare program and eliminating co-pays for middle-class families. Gov. Michelle Lujan Grisham calls the state's program a "road to a universal child-care system." Washington Post

- Dress for success. Workwear brands are scrambling to make business clothes that hybrid workers will want to wear. The new "power casual" or "business comfort" often looks like typical work attire with hidden stretch fabric. Some brands are calling the return-to-office trend the "the casualization of the lower half." New York Times

- Key change. Despite trying to withdraw her name from contention for the Rock & Roll Hall of Fame, Dolly Parton now says she will "accept gracefully" if chosen to be inducted into the institution. While the country music legend originally said she didn't feel "rock & roll enough" for the honor, she told NPR that there's "more to it than that" after the Hall of Fame declined to remove her from the running. CNN

Epiphany in the baby-food aisle The Cut

All split up and nowhere to go Curbed

'The family secret': How rape is hushed up in Britain's armed forces Economist

"We have to stand up. We have to take a stand on behalf of those who are being hurt. We have to be doctors. This is what we do, even when it’s difficult."

- Assistant Secretary for Health Rachel Levine, delivering a speech about the importance of trans-affirming medical care to the Out For Health Conference.