23% of workers say employers are offering new mental health benefits. But is it enough? 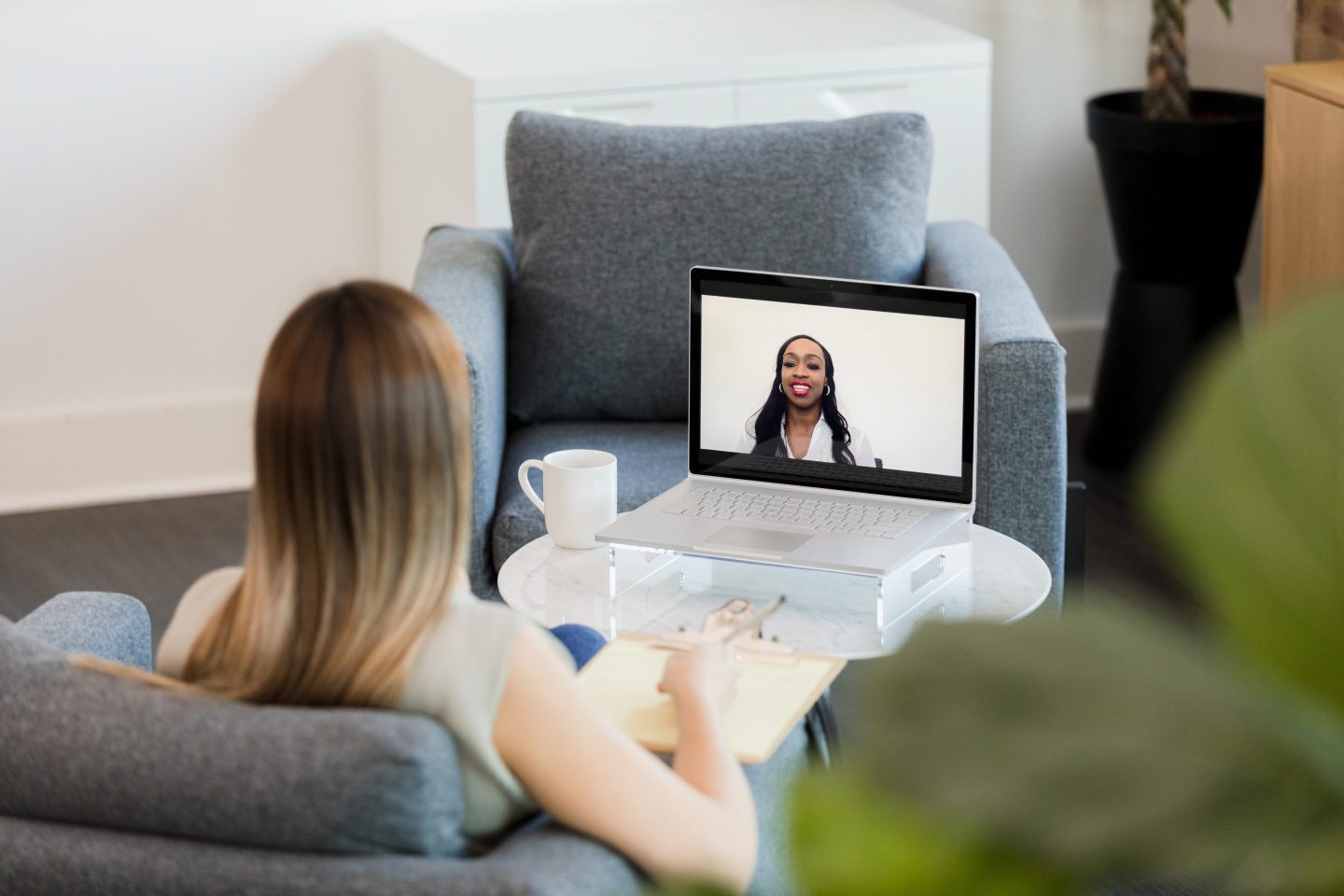 The COVID-19 pandemic helped spur many businesses to up their mental health benefits for workers.
SDI Productions/Getty Images

First came the lockdowns that stalled everyday life and sent millions of American children home from school and daycare. Then the images of medical tents in Central Park as hospitals overflowed with COVID-19 patients. And then the seemingly endless caseload spikes as Delta and Omicron variants worked their way through the U.S.

Throw in protests against racism and police brutality, a contentious presidential election, devastating natural disasters across the U.S., rising inflation, and now a war in Eastern Europe, and it’s no wonder more Americans are struggling with mental health issues now.

More than one in four Americans, or about 27%, reported feeling symptoms of an anxiety disorder or depression within the last two weeks, according to an analysis by the National Center for Health Statistics of a recent estimate from the Household Pulse Survey published on March 14. That’s a dramatic uptick from the 10.8% of U.S. adults who displayed symptoms of an anxiety or depressive disorder in 2019, prior to the outbreak of the COVID-19 pandemic.

But finding treatment and support for these and other mental health issues is a significant challenge. Although 91% of Americans are covered by health insurance, a report from the U.S. Government Accountability Office found that coverage doesn’t guarantee access to mental health treatment. More than half of those enrolled in a health plan didn’t get the mental health services they needed in 2021, according to estimates from advocacy group Mental Health America.

In many cases, employers are trying to step up and fill the gap. But are these programs enough to help break down the barriers that have existed for decades?

Nearly 23% of workers say their employer has introduced new mental health services during the pandemic, according to a February survey of more than 2,000 U.S. adults by the Harris Poll on behalf of Fortune. Over a third (36%) of employees say their companies have always offered some kind of mental health support.

Companies that are going the extra mile are appreciated. About two-thirds (67%) of workers say mental health services offered by employers are beneficial, according to the Harris survey. Millennials, parents with children under 18, and remote workers are most likely to say such services are beneficial.

Employers have come a long way in reducing the stigma around talking about mental health issues in the workplace. More companies are encouraging their workers to have open conversations, and they are providing training to managers on how to approach difficult conversations. “Two years ago, I don't think there were very many companies doing that,” says Julie Stone, a managing director of WTW’s North American health and benefits group.

Fortune’s No. 1 Best Company to Work For in 2022, Cisco, has recently embedded well-being training as part of the company's core leadership training. Additionally, Cisco has mental health practitioners join company meetings, Fran Katsoudas, Cisco’s chief people, policy, and purpose officer, tells Fortune. "What that does is, it basically says, it's okay to have these questions; it's okay at moments to need help and support."

About one in five employees say they have access to virtual therapy sessions, according to the Harris survey. Many HR departments utilize third-party companies for additional mental health support, from simple self-guided apps such as Calm and Headspace to more robust counseling and coaching services like BetterUp, Lyra Health, Spring Health, Talkspace, and Vida Health. Some of the top-ranked Best Companies to Work for, including Cisco, Rocket Companies (No. 7), Orrick (No. 13), Slalom Consulting (No. 45), and Hyatt Hotels (No. 75) have taken this approach.

These outside companies are starting to make real inroads because they come to the space with new and different models that can help break through the traditional red tape that exists around getting mental health treatments, Stone says.

Plus that increased virtual access is critical, Stone says. “Access to virtual therapy and counseling has really helped to break down barriers, even perceived barriers of time,” she says. In many cases, workers can’t spend 45 minutes driving to a therapist’s office for an hour-long appointment. Virtual therapy makes it possible to speak to a professional from their bedroom.

There's also a lot of movement around rethinking the classic Employee Assistance Program (EAP) model, Stone says. The average number of subsidized counseling sessions offered through EAP models is just eight, according to a 2019 report published by the International Employee Assistance Professionals Association.

But that may not be enough for some workers—and when they go over that set limit of free sessions, it can get expensive. The length of treatment for psychological issues can vary depending on the condition and severity. For anxiety disorders, many patients improve with eight to 10 therapy sessions, according to the American Psychological Association. About half of PTSD patients recover with an average of 15 to 20 sessions.

Despite the great strides corporate America has made in the mental health space, 41% of workers still say their company doesn’t offer any therapy, counseling, or related benefits, according to the Harris survey.

In some cases, that’s because there’s a disconnect between employer and worker perspectives on mental health. Last year, management consulting firm McKinsey & Company found that 65% of employers believed they were adequately supporting mental health needs. About 51% of workers agreed.

But the lack of mental health support is not always something an employer can fix. Many times, it’s out of the company’s direct control because insurance companies control the network of available providers. Overall, more than 129 million Americans live in areas where there aren’t an adequate number of available mental health providers, according to 2021 estimates by the Kaiser Family Foundation.

“There's no employer I've talked with who wouldn't be willing to pay more to have a broader network and get better mental health care for their employees,” Stone says.

The dearth of providers is, in part, thanks to the fact that providers in the behavioral health space have not been reimbursed on a par with medical doctors, Stone says.

Making it even more difficult for Americans to navigate mental health services is the fact that many insurance providers have inaccurate directories of their in-network providers, creating what is called a “ghost network.” Many Americans can’t find covered services and end up paying out of pocket.

“Unfortunately, I’ve had patients who needed to seek care and would go to their provider directory and call sometimes 30 or 40 providers, and be told that there was no access, no availability, or be put on a wait list, or just never hear a response. Often [this] resulted in people not being able to access the care that they needed,” Anna Ratzliff, co-director of the Advancing Integrated Mental Health Solutions (AIMS) Center and a professor at the University of Washington, said in late March in testimony in front of the Senate Finance Committee.

Congress members on both sides of the aisle have said they are committed to finding legislative solutions to tackle these challenges. “There’s a lot of work ahead, but this committee is focused on guaranteeing that Americans can get the mental health care they need when they need it,” chairman Ron Wyden (D-Ore.) said.

But as the wheels of legislation slowly turn, Stone says, mental health access and support is a pressing issue for employers. Those that can work to address it, should. Research from WTW recently found that the higher employees’ stress level, the bigger its impact on performance. More than half of workers who identified as having low mental well-being felt burned out compared to only 20% of those with high emotional well-being.

Meanwhile depression is estimated to account for $44 billion in losses to workplace productivity, according to a report from Tufts Medical Center and One Mind at Work.

“Making it easy to access care has a tremendous impact,” Stone says.