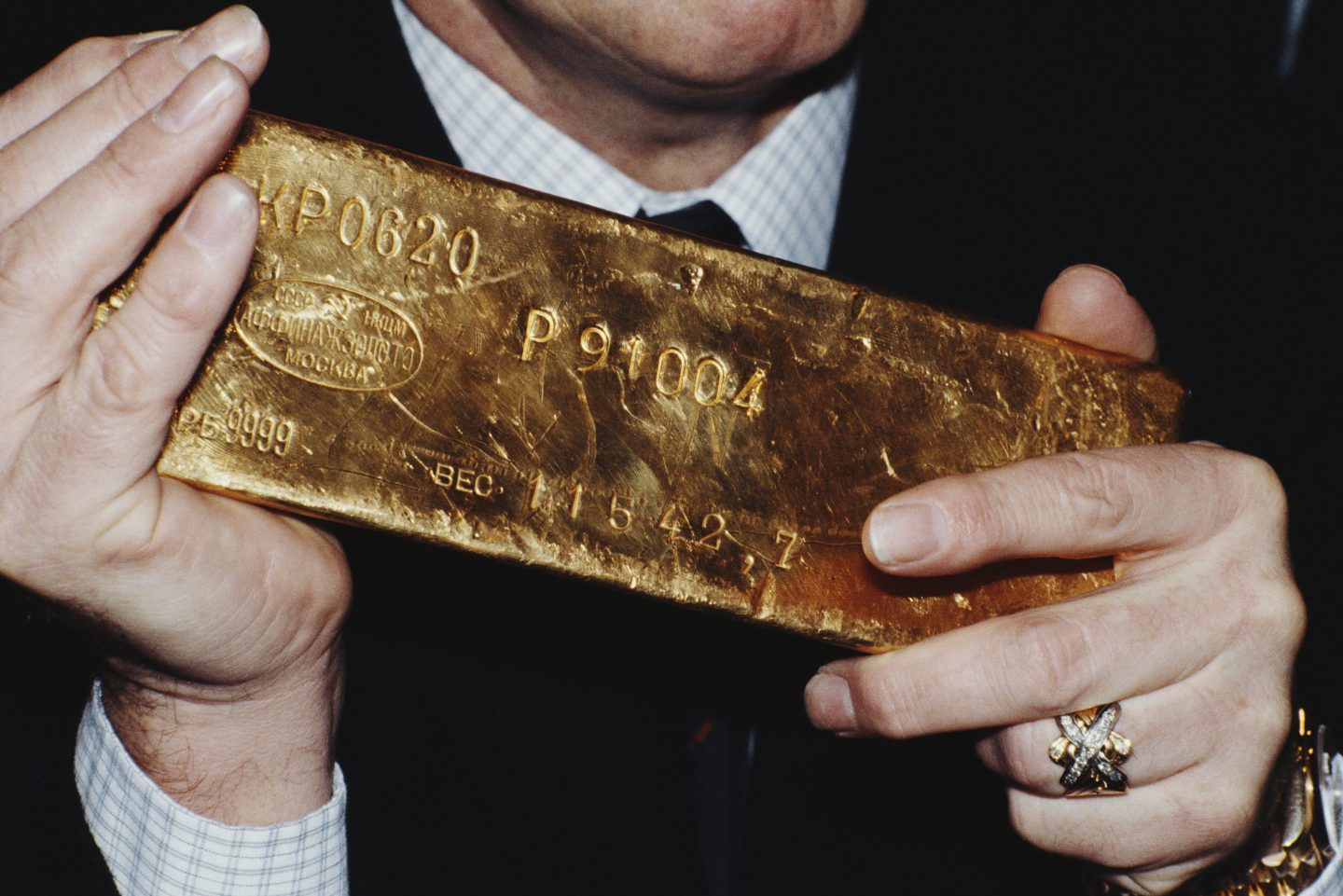 Investors will be holding on to gold to protect their hard-earned savings in the first quarter of 2022.
Keystone/Hulton Archive/Getty Images

Investors looked to gold to protect their hard-earned savings in the first quarter of 2022 as record inflation pummeled other investment vehicles.

Physical demand for the safe-haven asset jumped 34% year over year to 1,234 tonnes in the first three months of 2022, according to a report from the World Gold Council released Thursday. That’s the highest quarterly demand increase the gold market has seen since 2018.

“There will be more demand for gold as a safe haven as long as the world is in disarray and as long as the war is raging in Ukraine,” Kevin Rich, a global gold market adviser to the Perth Mint, the official bullion mint of the government of Western Australia, told Fortune. “Until the Fed can really get their arms around inflation, gold demand as a hedge should be there.”

Global gold demand was 19% above its five-year average of 1,039 tonnes in the first quarter.

The rise was largely driven by the strongest quarterly inflows to gold ETFs since 2020, the gold council said. Gold ETF holdings jumped by 269 tonnes in the first three months of the year, more than making up for the 174-tonne annual outflow seen in 2021.

Central banks also added 84 tonnes to their global gold reserves in the quarter, with net buying more than doubling from the fourth quarter of 2021.

The price of gold reached $2,050 per ounce in early March after Russia’s invasion of Ukraine, but has since retraced its gains, falling to under $1,900 per ounce this week.

Rich said that he expects gold prices will likely remain volatile in the coming quarters as investors judge whether geopolitical tensions will continue, and if the Federal Reserve’s actions to combat inflation will be successful.

“I think the market has a ton of unanswered questions out there, and gold is going to react as we start to see some of these answers unfold,” he said. “Can the Fed really fight inflation without throwing a wet blanket on GDP? And are we headed toward a stagflation where they can’t get inflation down, but they’re hurting GDP with rate hikes?”

The Fed raised interest rates by a quarter-point in March in hopes of cooling rising consumer prices, and analysts are expecting a half-point hike could be coming in May. If inflation is controlled, it will likely be bad news for gold prices—that is, unless rising rates spark a recession.

Gold tends to perform well during recessions, data from the Bureau of Labor Statistics shows, as investors look to the physical asset to protect their wealth.

A number of top investment banks and Wall Street titans have been sounding the alarm over the potential for a U.S. recession over the past few months as well. Deutsche Bank economists, led by head of research David Folkerts-Landau, even predicted this week a “major recession” could be in the cards for the U.S. economy, arguing the Fed is “well behind the curve” when it comes to fighting inflation.

“On balance, the strong start to the year for investment and the negative economic ramifications of persistently high inflation and war in Ukraine make us confident that investment [in gold] will be higher this year than last,” the World Gold Council explained in its report.