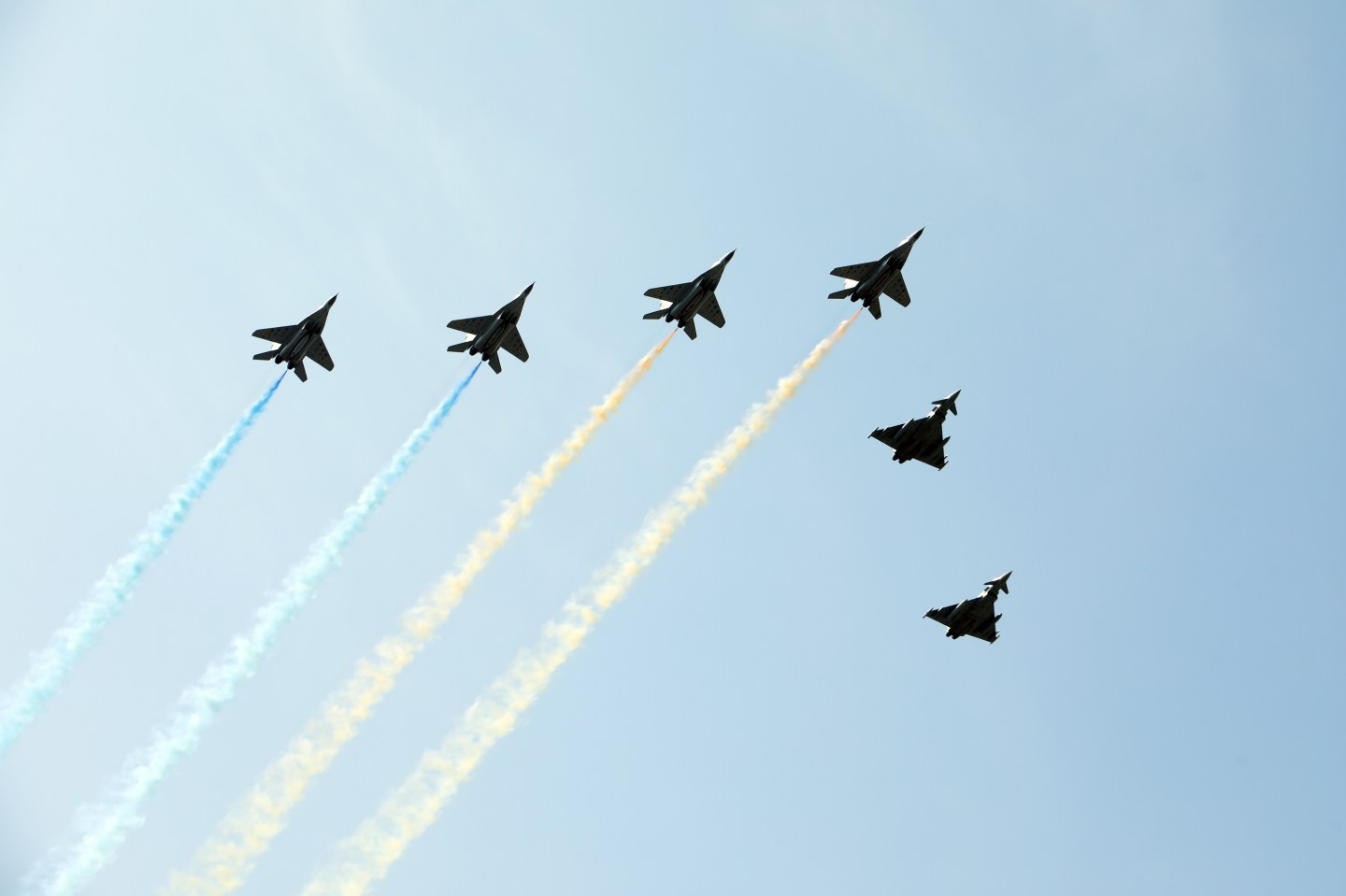 MiG-29 air superiority fighters (L) spread smoke in the colors of the national flag of Ukraine to conclude the solemn military parade on the 30th anniversary of Ukrainian Independence in Kyiv.
Yevhen Liubimov—Ukrinform/Future Publishing via Getty Images

Ukrainians appear to have launched an online campaign soliciting donations of fighter jets to defend their skies from Russian invaders.

The campaign, first reported on by Business Insider, features a video of a Ukrainian fighter pilot in front of a badly damaged war plane.

“Buy me a fighter jet,” he says. “It will help me to protect my sky filled with Russian planes that bomb my land, kill my friends, and destroy our homes and everything I have ever known.”

Explosions are decimating schools, homes, and hospitals, the pilot says.

“An unexpected death from above is a harsh reality for millions of our people right now,” he says as he clenches his fist. “You have a chance to stop it. Give us wings to fight for our sky.”

He then appeals to businessmen, IT specialists, actors, singers, “whoever you are…whichever nationality you are or country you live in” to “help us stop the terror.”

The campaign website invites those interested in assisting to email for help finding, buying, and transferring a fighter jet to the country’s air force. Help with technical and legal issues will be provided, it says. There doesn’t appear to be an opportunity for individuals to make smaller donations.

The planes needed cost $25 million each, on average, according to the website, which added that each plane “is thousands of lives saved.”

As of Sunday the now war-torn country had received nearly $1 billion in aid from companies and organizations, in addition to celebrities and private individuals. Bloomberg Philanthropies and Open Society Foundation donated $10 million and $25 million respectively. The IKEA Foundation donated $22 million, and the Red Cross had donated $12 million as of earlier this week, Fortune previously reported.

Among celebrities who have donated: Actors Ryan Reynolds and Blake Lively each gifted $1 million via the United Nations’ refugee agency; actors Ashton Kutcher and Mila Kunis, who was born in Ukraine, raised over $30 million; and Bethenny Frankel, a former Real Housewives of New York star, raised $85 million.

The U.S. has not provided fighter jets to Ukraine, and refused in March to help Poland transfer MiG-29s, Russian-built equivalents of F-16s, to the country via a U.S. and NATO base in Germany, Politico reported. Russian President Vladimir Putin could see the transfer of fighter jets to the country as an act of aggression that could worsen the situation in Ukraine, Pentagon spokesperson John Kirby said at the time.

In an interview with CNN’s Jake Tapper posted to the news outlet’s website Sunday, Ukrainian President Volodymyr Zelensky said he “doesn’t believe the world” and that the Ukrainians “don’t believe the words” of international leaders who fail to provide necessary assistance.

“If you are our friends or partners, give us weapons, give us a hand, give us support, give us money to stop Russia, kick Russia,” he said. “Not everyone has got the guts.”