If Elon Musk succeeds at buying Twitter, one thing’s for sure: He’s making a horrible investment 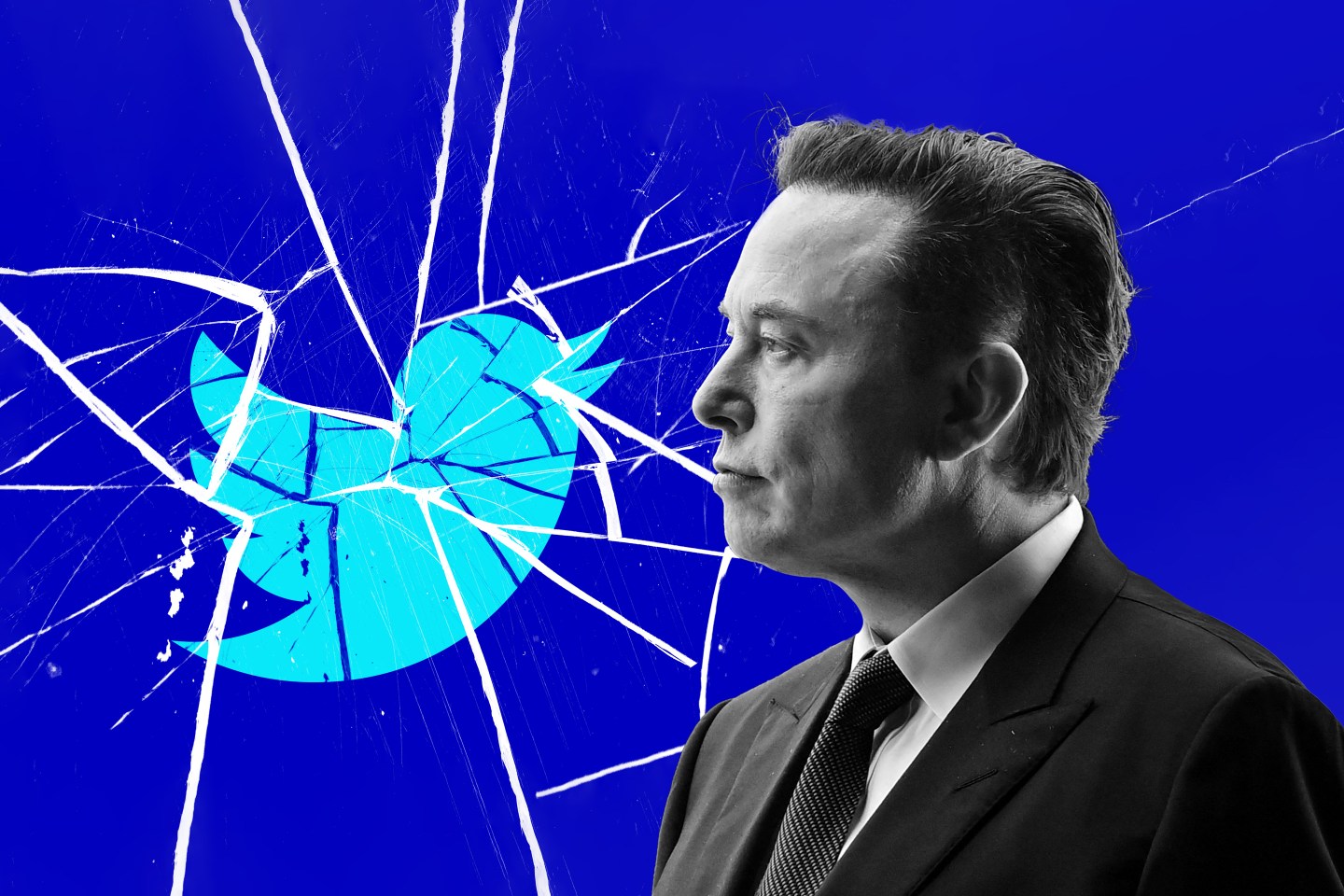 Musk may want to own Twitter—but certainly not for the strength of its underlying business.
Photo Illustration by Fortune; Original photos by Getty Images(2)

It’s a hell of a price to stop a chatroom from censoring people and supposedly undermining democratic expression—including the outrageous salvos from the buyer himself. Elon Musk’s $41.4 billion bid for Twitter that dominated the news cycle on April 13 probably marks the first time a major business leader offered to spend that kind of money to buy a profit-seeking enterprise for purely idealistic motives. In his letter to the Twitter board, the Tesla and SpaceX CEO declared, “I believe in [Twitter’s] potential to be the platform for free speech around the globe,” and it will “neither thrive nor serve this societal imperative [until] it’s turned into a private company.”

What happens to Musk’s bid from here is Wall Street’s favorite guessing game. His SEC filing is full of contingencies, among them that he intends to seek financing, and if he doesn’t get it, can rescind the offer. It’s highly possible that Twitter will shun his advances, especially since many employees have expressed horror at working for the mercurial Musk. Twitter’s shares spiked from $39.1 to $50 when Musk first disclosed his 9.2% position on April 1, but then slid to $46, and barely budged when he unveiled the bombshell, all-cash bid for all the stock at $54.20. The big gap between his offer and the current price signals that investors see an excellent chance the deal won’t happen. Heightening the suspense: Musk claims that if he doesn’t get his prize, he’ll dump all his holdings, potentially sending Twitter shares careening below where they stood before he unveiled his stake.

But one feature of this cliffhanger is certain. Musk would be making an absolutely terrible investment. When an acquirer agrees to pay a big premium for a target—in Musk’s case, 38% or $14 billion—they harbor a blueprint for chopping costs, luring lots more customers, and otherwise improving operations to recoup the extra billions, and then some. But Musk has announced no plans to make Twitter a better business. And nearly everything about Twitter needs fixing. Its user growth is flagging; its operating costs and capital expenditures are excessive; and it’s vulnerable to invaders in field that’s easy to invade. “Twitter can’t make their product unique; they’re a slightly more robust version of group texting,” says David Trainer, CEO of investment research firm New Constructs. “Its shares shouldn’t be worth more than $10 or $15.” Goldman Sachs isn’t a fan either, stating that sans Musk, Twitter’s basic business is worth $30 to $36 a share.

Put simply, Musk is vastly overpaying for an enterprise in decline that shows no signs of rebounding. Sure, the quarter-of-a-trillion-dollar man would be parking just 15% of his net worth in Twitter, but he’d also be doing what every other corporate raider would consider deranged: burning billions.

Twitter’s losing money big-time, and the picture’s not improving

After losing a total of $2.3 billion from 2013 (the year it went public) through 2017, Twitter booked strong profits in both 2018 and 2019. It appeared to be pursuing the classic tech model of youthful deficits followed by fast-ramping earnings that would make its big market cap make sense. It didn’t happen. The reason: The growth in the social media’s Twittering customer base slowed dramatically. Over the five quarters from Q1 of 2019 to Q2 of 2021, its Monetizable Daily Active Users swelled by 39% or 52 million, an average of 10 million every three months. But in the 18 months through the end of 2021, its customer base rose by only 31 million, or at half the pace in 2019 and early 2021. As core revenue growth slowed, costs exploded. Between 2019 and 2021, sales rose by 47%, while expenses rocketed 80%. The company blamed the ramp-up in costs on heavy spending for the new personnel and infrastructure needed to propel the next wave of expansion.

Instead, it appears that Twitter simply needs to spend a lot more to keep the same customers and attract each new recruit. It’s especially troubling that its capital expenditures in 2021 reached an all-time high of $1 billion, almost double the figure in the flush days of 2019. Those outflows saddled Twitter with negative free cash flow of almost $400 million. Yet in late 2021, the board instituted a $4 billion buyback program. Those funds can’t come from profits, since Twitter’s losing money. So it could be tapping cash from its treasury, and maybe even borrowing, to back the repurchases. Hence, the policy makes Twitter’s fortunes a lot riskier by lowering its financial cushion during tough times.

To gauge Twitter’s performance, I asked accounting expert Jack Ciesielski to provide an analysis of its cash generation versus the growth in its assets. In other words, how profitably is Twitter deploying all those outlays on computer systems, new acquisitions—it acquired seven young media players in 2021—and its other investments? Ciesielski deploys a metric called cash return on assets, or COROA. He starts by taking cash from operations, then eliminates the impact of leverage and taxes by adding back interest and federal and state levies paid in cash. Share-based comp is subtracted, since it’s a real cost but temporarily inflates cash flow since the hit, in the form of dilution, comes later when restricted stock and options vest. He calls the numerator “operating cash flows.” As a denominator, COROA uses average assets for the year, but adds back accumulated depreciation to count all the spending on plant and equipment in the company’s lifetime. Hence, COROA is an excellent proxy for how much pure cash a company generates for every dollar invested in the business.

Twitter is a case study in getting bigger and less profitable at the same time. Since 2016, its adjusted assets have doubled to $14 billion last year. But its operating cash flows haven’t stayed flat in the low-$600-million range. Since the close of 2019, it’s added almost $1.7 billion in assets and has seen operating cash flow shrink by over 80% from $958 million to $158 million. Put simply, Twitter’s investing more and more billions in building its platform, and generating less and less cash. The more it spends, the less it harvests.

For Trainer, Twitter lacks the “moat,” or rampart, to prevent rivals from luring today’s tweeters to their own sites. “Twitter’s really a glorified chatroom,” he says. “It hasn’t done much to evolve. Competitors wouldn’t have a hard time building a similar model from scratch, and it’s already facing competition from Instagram and Snapchat. I remember vividly what happened to such onetime market leaders as AOL’s Messenger and Friendster.” Twitter’s conundrum, he adds, is that it can’t boost profits without antagonizing its customers. “To get more profitable, Twitter would need to run far more ads,” he says. “And the blizzard of ads gets in the way of using the product. People don’t want to be bombarded with ads instead of reading what they want to read and publishing what they want to publish.” If ads get too intrusive, the tweeters would move on to rival platforms. That’s why Twitter keeps spending more and more as its stream of new customers keeps slowing.

Elon Musk is a great visionary. So far, his goal for Twitter is creating a great, buzzing public square for open expression. But Musk also loves to make money, and like most billionaires, takes losing it personally. He may well become the owner, host, and principal voice in this arena of his dreams. But how long will he want to play moderator when the prize is swallowing his cash by the billions?