‘Toxic masculinity’ derailed the Oscars from the achievements that really mattered 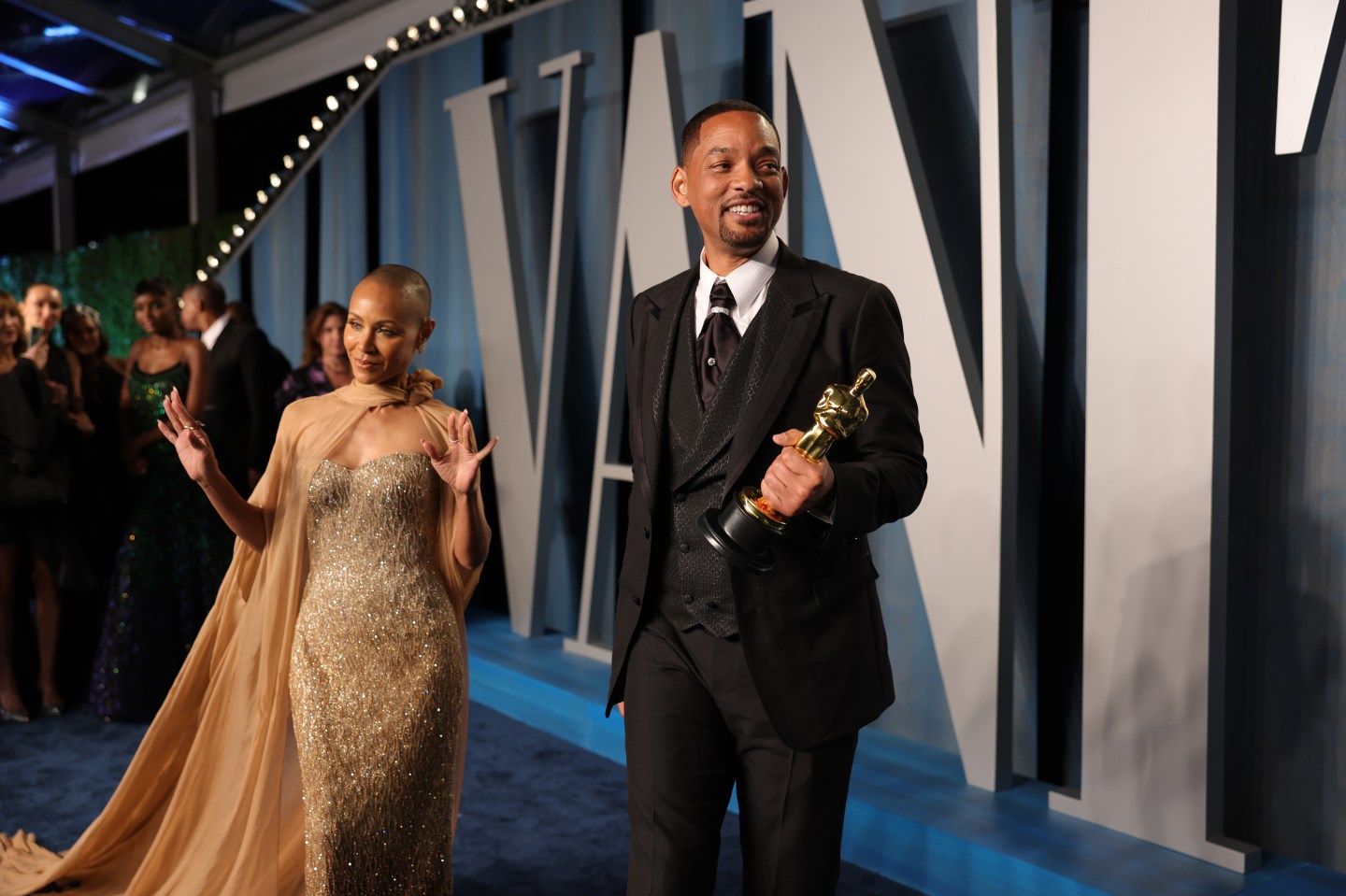 – Awards drama. When the Oscars’ hosts started off the night joking about “toxic masculinity” in their opening monologue, few thought they’d see the phenomenon on display later that evening. But that seems to be what happened a few hours later when actor Will Smith slapped presenter Chris Rock, following Rock’s joke about Smith’s wife, Jada Pinkett Smith.

It was a moment like no other in Oscars history—more confusing and dramatic than even the 2017 La La Land/Moonlight mixup. As the room and at-home viewers buzzed trying to figure out what exactly happened, an understanding of events emerged. Rock made a joke last night about Pinkett Smith starring in G.I. Jane—seemingly a reference to her bald head—and Rock also made jokes at Pinkett Smith’s expense during his 2016 hosting tour. (Pinkett Smith suffers from alopecia, a disorder she’s discussed in the past.) All combined, Rock’s antics seem to have led Smith to yell “Keep my wife’s name out of your f***ing mouth!,” storm the stage, and take out his anger on Rock with an open palm.

Smith made a tearful apology of sorts after winning the best actor award for his performance as Venus and Serena Williams’ father in King Richard less than an hour later. “Richard Williams was a fierce defender of his family,” he said, adding that he’s been called to “protect people,” mostly women, such as his costars in the film, Aunjanue Ellis, Saniyya Sidney, and Demi Singleton. “Love will make you do crazy things,” he said.

We don’t know exactly what prompted Smith to slap an Oscar presenter during the live broadcast (and Pinkett Smith has remained quiet about the joke and altercation that followed). But we do know that language about protecting women can be loaded—especially when tied to any kind of physical violence. Some, like presenter Tiffany Haddish, saw the moment as an example of a man “stand[ing] up for his wife.”

For today, the moral of the story is that we’re talking about this altercation rather than the work of women who were honored during the ceremony. Venus and Serena Williams, for their part, haven’t had an easy awards season. First, a debate emerged about whether a film about their dad should have been made before one about them (the subject of another early-in-the-night joke). Then, just two weeks ago, The Power of the Dog director Jane Campion said in an acceptance speech that she had to “play against the guys,” unlike the tennis stars, igniting another round of controversy.

Still, there were some other important moments. Beyoncé’s neon-green, tennis-themed performance from the Williams sisters’ hometown of Compton, California kicked off Oscars night—a more positive moment for the King Richard awards season. While The Power of the Dog came up short in several categories, Campion won for best director, making her the first woman to be nominated for best director twice and marking the first time two women have earned the directing prize in back-to-back years.

Director Sian Heder’s film CODA, the story of a Deaf family and their hearing daughter, took home the top prize of best picture. One of the night’s most heartwarming moments came when Troy Kotsur won best actor, making him the second Deaf actor to win an Oscar, after his CODA costar Marlee Matlin more than three decades ago. Minari actor Youn Yuh-jung presented Kotsur with the award, signing his name before announcing it to the room and offering to hold his statue so he could sign his speech with two hands.

Regina Hall, Amy Schumer, and Wanda Sykes had a successful night as the first group of women to host the Oscars and the Oscars’ first hosts since 2018. Their material covered pay inequity, anti-abortion and anti-trans rights legislation. And following the Smith incident, Schumer deftly defused the tension.

Ariana DeBose took home the night’s first award, winning best supporting actress for her role as Anita in West Side Story. She’s only the second Latina to win an acting Oscar; the first was Rita Moreno, 60 years ago for the very same role. “You see a queer, openly queer woman of color, an Afro-Latina who found her strength in life through art,” DeBose told the audience. “And that’s what I believe we’re here to celebrate.”

- Benefits with a catch. Starbucks offers fertility benefits coverage to part-time workers, enticing many to seek out jobs at the coffee chain. But the premiums for these insurance plans can eat up or even exceed the size of a Starbucks barista paycheck. Some who relied on the chain for the benefit said they went into debt or had to work second jobs. NBC News

- Another lawsuit. Activision Blizzard is at the center of another sexual harassment lawsuit. A plaintiff, identified as “Jane Doe,” alleges that former Blizzard and current Microsoft employee Mark Skorupa made sexual comments and advances towards her. The plaintiff says she was hired to work under Skorupa and another Blizzard employee, and was demoted and passed on for other internal positions when she complained to human resources. The Verge

- Under Taliban rule. Afghan women living under Taliban control are facing stricter rules when traveling and seeking basic services without a male guardian present. Although they aren’t officially barred from traveling alone within 48 miles of their homes, many women have reported hospital and even taxis turning them away if a male relative isn’t accompanying them, the Wall Street Journal reports. Last week, the Taliban rescinded its promise to reopen school for girls in grades seven and up. The New York Times’ podcast The Daily shared the accounts of young women acclimating to a life without school or jobs, and the future they now face.

- Tweeting through it.  Jennifer Sey’s departure from the apparel company Levi’s, after a 20-year career there, raised eyebrows last month. The former Levi’s president and potential CEO candidate claims she was made a pariah and ultimately ousted for tweets decrying COVID-related school closures and mask mandates. Sey says her statements are a matter of free speech, but Levi’s disagrees, noting that Sey also criticized public health guidelines and denounced government officials like Anthony Fauci. Though employees are free to use social media to discuss their views, the retailer says it expects employees to protect its reputation and image. New York Times

- Betting big. Jette Nygaard-Andersen, CEO of gaming company Entain, and Amy Howe, CEO of fantasy sports and online gambling company FanDuel Group, are proving to be disruptors in the gambling industry—a male-dominated field that’s strife with profitability issues. Entain attracts gamers through recreational appeals like free-to-play games, instead of through sign-up bonuses or risk-free first bets that competitors utilize. Howe plans to target more women in sports betting, who she says make up half of sports fans but only 20% of the sports betting population. CNBC

- Tell all. Vice President Kamala Harris and her staff are frustrated about her policy portfolio and clashing with President Joe Biden’s staff, according to an upcoming book on the 2020 election from New York Times’ correspondents Jonathan Martin and Alex Burns. Harris and her staff expressed concerns over being “restricted to a few subjects mainly associated with women and Black Americans” and an inability to be publicly forceful on issues like the filibuster and federal voting rights until Biden first made his support for passing such legislation known. The book also details Vice President Harris’ apparent dismay with her Vogue February 2021 cover image, reporting that she felt "wounded" and "belittled" by the controversially casual photo. Politico

- Doubly disadvantaged. In a fixed hybrid setting, where some employees are remote full-time and others in-person full-time, women working remotely full-time may face “double disadvantages” in areas where they already trail their male colleagues, including access to networking and sponsorship opportunities and being perceived as committed to their career. A flexible hybrid setting where an employee’s location changes throughout the workweek, coupled with policies and practices that level the playing field and provide women with resources to succeed, can help employers avoid the risk of doubly disadvantaging their female workforce. Harvard Business Review

What white men say in our absence The Cut

Black Tesla employees describe a culture of racism: 'I was at my breaking point' L.A. Times

Losing my ambition The Cut