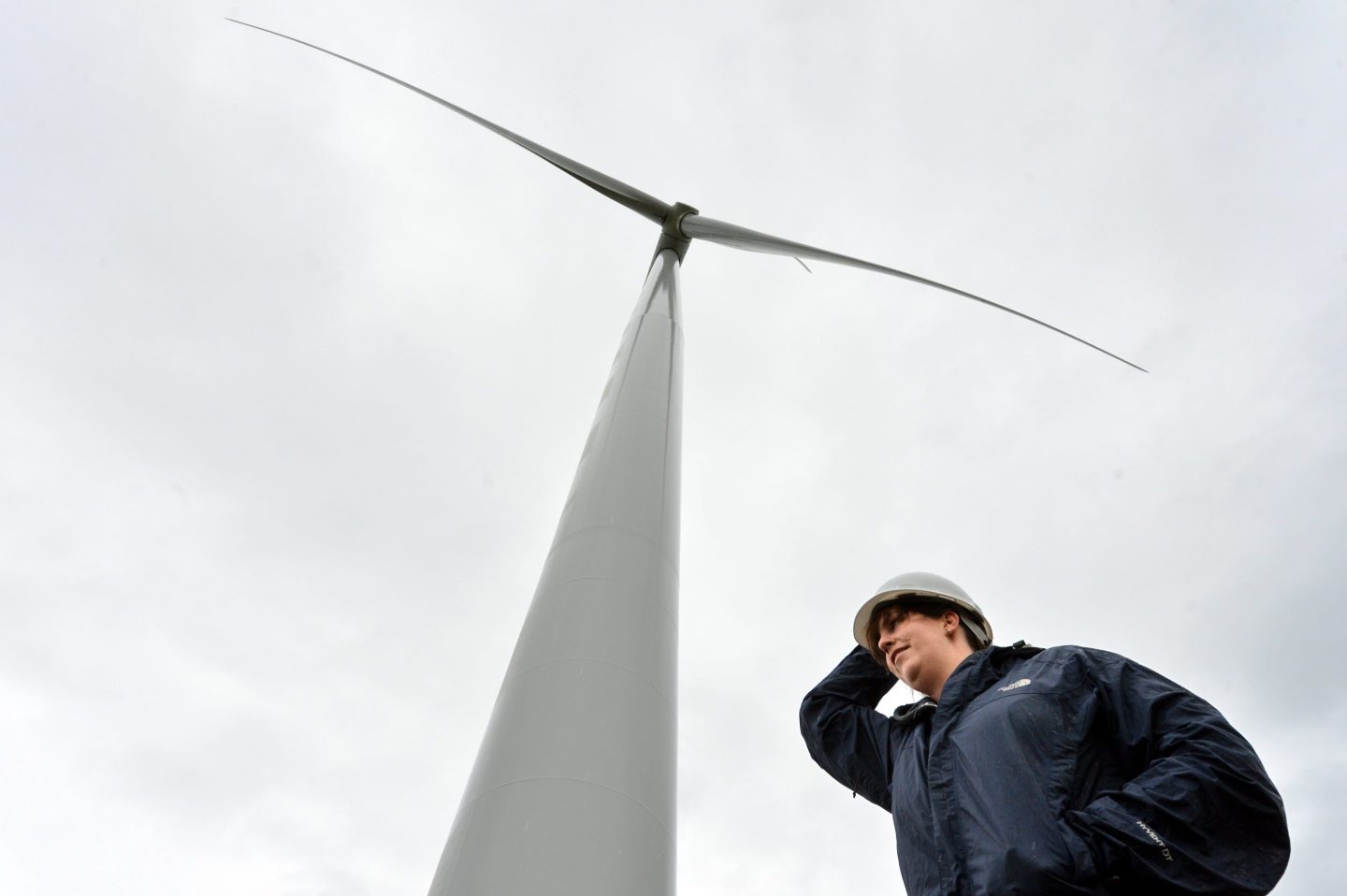 A Google staffer stands next to a massive turbine at a NextEra wind farm in California that provides energy to Google. “Given the now evident price of energy dependence,” the authors write, “companies that pushed hard for solar and wind suddenly look exceptionally prescient.”
Photo by Doug Duran/MediaNews Group/Bay Area News via Getty Images

With Russian oil and natural gas bans becoming a reality, the world is about to experience the greatest carbon fuel shock since the Arab oil embargo of the 1970s.

Most of Europe is scrambling to put together enough natural gas supplies to stay warm through the spring. The U.S. is less affected, but natural gas prices are soaring there as well. This is expected to lead to jumps in electricity prices; numerous U.S. utilities have switched from dirty coal to natural gas for baseline production over the past decade, and they are exposed to price increases.

The big beneficiary of this disruption will be utilities that have embraced green power adoption. Given both the plunging cost of solar panels and wind power, and the now evident price of energy dependence, companies that pushed hard for solar and wind suddenly look exceptionally prescient. And one U.S. utility looks more prescient than most.

If it were a country, NextEra Energy, a Florida-based utility, would rank among the top 10 in the world in wind-energy generation. The company is the largest private generator of wind energy in the U.S. today and among the largest on the planet, with dozens of wind farms dotting the landscapes of Texas, the Great Plains, and the Pacific Northwest. NextEra is in the process of building the world’s largest solar-powered battery storage installation in Florida, to capture power during daylight hours and apply it after dark, when utilities normally tap fossil fuels to keep the air conditioners humming. NextEra’s flagship utility, Florida Power and Light, has the largest solar energy capacity of any utility in the world. Along the way, NextEra has become a stock market favorite.

This company’s transformation from a relatively staid power provider to a market leader and innovator resulted from observations on the pace of change and a conscious effort to move from the standard incremental mindset of a regulated business to the exponential thinking required to make big changes. From humble beginnings as a small local utility in Florida, NextEra Energy became an early pioneer in renewables. It has grown to become the world’s largest electric-utility company by market capitalization. (Disclosure: Vivek has been an occasional adviser to the firm and has run a master class on exponential innovation with its executives.)

Utility innovation may seem unsexy. But the chaos that the conflict over the Ukraine has unleashed on global energy markets clearly demonstrates the need for a more sustainable future with more reliable energy sources untethered from politics and, not coincidentally, reducing greenhouse gas emissions. What NextEra Energy perceived and acted on that others did not was an exponential progress curve for renewable technologies.

NextEra’s managers wagered in the early 2000s that the costs of solar- and wind-energy generation would fall dramatically even as the costs of traditional energy sources remained steady or rose. They saw this as an opportunity to expand the company’s reach and profits just ahead of the rest of the energy industry. The gamble paid off in spectacular fashion, as demand for wind and solar energy took off and prices of creating power generation capacity with renewables, as predicted, plummeted.

A “toe in the water” strategy

NextEra’s managers called this its “toe in the water” strategy: an effort to invest in a variety of energy-related areas to test its ideas and capabilities. Other areas into which NextEra has expanded include power-transmission cables; battery farms and other installations for storage of renewable energy; and natural gas pipelines. In all of these areas, NextEra has expanded greatly over the past 10 years.

NextEra took these steps on the basis of a hypothesis about what the energy future would look like and the competitive competencies the company would require. It consistently identified key trends well ahead of market forces. NextEra also realized that coal plants would come offline sooner than anyone recognized, and that demand for coal was in steep decline, opening up even more opportunities for renewables but also for natural gas as a replacement for baseline production capacity that could reliably run at any time, day or night. Following the exponential curve of renewable price declines, NextEra correctly predicted that the volume of solar and wind development in the United States would exceed forecasts—as it did, by a factor of five to 10. Jim Robo, who just stepped down this month as CEO after nearly 10 years at the helm, was repeatedly proved correct in his long-held assumption that the exponential curves NextEra is riding would accelerate faster than investor and market expectations. This is, simply, the nature of exponential change.

Robo was only the company’s third CEO since 1989. He joined NextEra in 2002 as vice president of corporate development and strategy before leading the company’s competitive business and then serving as chief operating officer. Robo, now the company’s executive chairman, describes a CEO’s main three responsibilities as being capital allocation, execution, and talent development. The importance of capital allocation in the electric-utility industry is clear; indeed, NextEra Energy is among the biggest U.S. capital investors in any industry. Yet Robo frequently reminds investors that what distinguishes one company from the next is the consistency of their execution and the quality of their talent. On execution, although Robo freely admits that NextEra Energy has made its share of $10 million mistakes, he says that it is thanks to superior execution that the company has avoided the billion-dollar write-offs of many of its peers. As for talent, it’s a topic that investors may raise less than they should, but it’s what Robo credits as a key competitive advantage for NextEra Energy.

This three-legged stool and an internal mandate for change has allowed NextEra to advance at a rapid pace while living within the constraints of a tightly regulated space. For example, the company pioneered the use of machine learning and big data to improve maintenance and utility grid reliability. It began installing smart meters and microgrids to better manage demand in the early 2010s, well before the 2018 and 2019 California wildfires and subsequent outages made better demand management a matter of necessity for all utilities. In a similar vein, NextEra is among the leaders in applying machine learning to utility problems. These can predict problems in the grid and in generation locations—even remote ones, where wind farms are located.

The company also deploys a large fleet of drones equipped with advanced cameras and machine-vision software to monitor its facilities for pending problems. This allows them to tap into rapid technology advancements and keep closer tabs on its sprawling infrastructure while keeping its employees safe doing remote inspections and climbing towers only while necessary.

All of these technologies have led to increases in reliability and significantly reduced outages.

NextEra eagerly embraces ideas harvested from anywhere and everywhere. In an annual contest for employee-generated ideas that it calls Project Accelerate, for example, from 2013 to 2019 the company received submissions of 18,000 ideas. It evaluated 11,000 of them, and 5,600 were deemed good enough to merit further exploration. Some of the ideas that NextEra put into practice included improving work processes, automating various data-entry functions, and insourcing certain job functions. These are nuts-and-bolts incremental changes, to be sure, but those incremental changes make it easier to focus more time and energy on the bigger changes that require real focus and attention.

As the masters of production in Japan, such as Toyota, proved with their continuous improvement systems, lots of small changes can add up to steady improvements. NextEra consistently cites these contests and participation as the main reason for its ability to report what it claims are the best operations and maintenance numbers in the entire U.S. for utilities. Better still, by including their employees in the ideation and innovation process, the company has kept its workforce engaged and learning. Turnover is low, and promotion from within is how the company predominantly fills its management ranks.

The company’s shareholders have benefited in a big way: The price of NextEra issues has increased roughly sixfold in the decade since 2010, not including dividend increases. With the Russian energy disruptions, NextEra and Florida will be the big winners.

This article is adapted from the book From Incremental to Exponential, by Vivek Wadhwa and Ismail Amla with Alex Salkever, Copyright © 2021. Reprinted by permission of Berrett-Koehler Publishers, www.bkconnection.com.