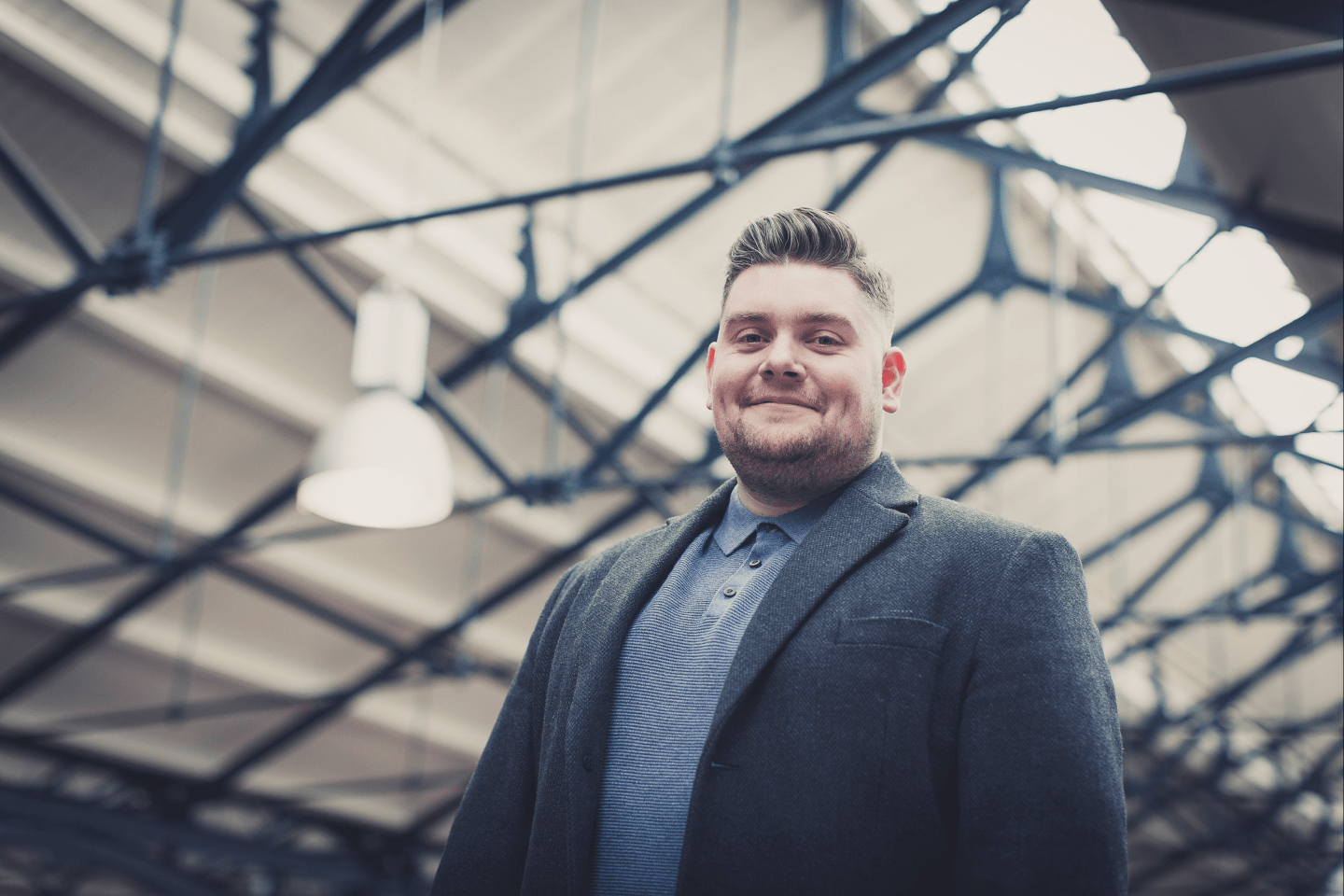 The 36-year-old Irish founder now calls New York home, his 3rd city in 5 years, where he lives with his wife, and two babies.
Courtesy Strong Roots

Strong Roots makes appealing, sustainably sourced, vegan frozen food like Cauliflower Hash Browns and veggie burgers at retailers like Whole Foods and Walmart in over 10 countries around the world.

But this feat didn’t come easy.

Before landing the largest vegan deal made by an Irish brand, Sam worked on his generational family business in Ireland learning the ins and outs of the Agri sector and honing his business skills.

Working for 10 years in the food industry, he learned everything that was wrong with CPG companies.

“The processes of most global brand leaders were broken. They focus only on profit, not food and that gave me an opportunity to fill the gap,” Dennigan told Fortune in a recent interview.

Seeing how badly the freezer aisle needed fixing, he set out to combine his food and agriculture experience with his creative leanings to create a global brand.

His first hurdle was communicating this to his family.

“It’s a generational family business. I was the third generation, so it was a difficult conversation to have because you’re expected to continue their legacy. It was tough at the beginning, but I have understanding parents and they eventually supported me,” Dennigan said.

Dennigan set out to sell a single container of products worth 60,000 euros at the time.

“If I didn’t sell that then I would be broke and have to go back to my family with my tail between my legs to get a job back,” Dennigan said.

Thankfully, Dennigan managed to sell that container and worked his way up from there.

As he got more involved in the manufacturing process, he realized that the majority of the market existed for really big players, and breaking the mold as a small company was more difficult than he thought.

What made things even harder was that the industry was not set up to accommodate his desire for sustainable, ethical practices in the supply chain.

Currently, the majority of companies use ingredients that reduce volume production costs rather than those that increase nutritional value.

On top of that, the agricultural sector is one of the biggest contributors to carbon emissions, so ensuring soil health, counting the carbon footprint, and following sustainable growing and sourcing practices was quite difficult.

“The more questions you ask of food manufacturers the more difficult it gets. We probably could have been 20 times bigger if the market was set up for it but what we’re actually doing is changing the food system while trying to grow a business at the same time,” Dennigan said.

But Dennigan is proud that Strong Roots has managed to stay true to its values and become carbon neutral on the basis of the energy used in the company headquarters, achieving b-corp status and expanding to more than 10 countries around the world.

The pandemic’s effect on food

Besides industry-specific problems, Dennigan’s business was also impacted by the global pandemic which brought its own set of challenges. For Strong Roots, however, COVID interestingly created more opportunities than problems.

The brand was initially set back by the pandemic because lockdowns and quarantines went into effect the same month Strong Roots was set to launch at Whole Foods.

With people scared to outside, the brand struggled with manufacturing availability and the uncertainty of whether they were going to shelf.

But it wasn’t long before things took an unexpected turn for the better.

“The trend we saw was initial panic and erratic purchasing behavior. We were a new product on the shelf and when everyone panic-bought all the brands they were used to, our product stood out a mile, so then we got a ton of customers purchasing our brand on product discovery. We got trial and that became customer loyalty. We benefitted from that which was a completely bizarre and unforeseen situation,” Dennigan said.

The pandemic had changed many people’s relationship with food. The global health scare was forcing people to refocus on personal health and wellness. And quarantine gave everyone more free time to cook homemade meals and try out new recipes.

This new shift proved to be a positive thing for the brand and also played a part in the popularity of healthy, vegan food.

According to a recent survey by Proagrica of more than 1000 adults in the U.K, 23% of the people wanted to start avoiding animal products due to health reasons, 39% said they’d be more likely to order a plant-based alternative to meat at a restaurant and those that had not switched to a vegan/vegetarian diet were more willing to consider a flexitarian approach.

Not everyone was so thrilled about ditching animal products though.

“We were the first brand in Ireland to use the words ‘plant-based’ in an advertisement campaign and Ireland is the land of beef and dairy. We didn’t get a lot of happy phone calls,” shares Dennigan.

Despite the resistance, the founder is happy that Strong Roots was able to start a conversation about the future, identifying the company as a classic challenger brand.

Dennigan believes that a healthy diet doesn’t necessarily mean cutting out meat completely, but instead adding more healthy foods to your plate.

He personally likes the Mediterranean diet for its balanced approach and thinks that the heavy reliance on meat, poultry, and fish products over the last 50 years has had a negative effect on people and the planet.

“We act as a gateway for plant-based consumption. It’s important to focus on the increase of good things in your diet as opposed to the removal of others,” he said.

Besides giving back to the community through charitable causes like the Make Veg Poverty History campaign and Feeding America campaign, Dennigan sets aside a few hours every Saturday to mentor people trying to become entrepreneurs.

“The first question I ask everybody is: what’s the end goal? Where is this going? Because a lot of people just want to start a business without thinking about what the end goal is,” he said. “If you know the answer to the question, all you have to do is build backward and put the steps in.”

“Call people who have successfully done what you’re setting out to do,” he said.

His personal objective with Strong Roots is to “make food better” and stick to the company’s mission of contributing to healthier people and a healthier planet through sustainable practices and transparency.

“It’s how we live. It’s not just a mouthpiece for us. And I think it’s important that everyone realizes that they can make relatively small contributions for big impacts,” Dennigan said.