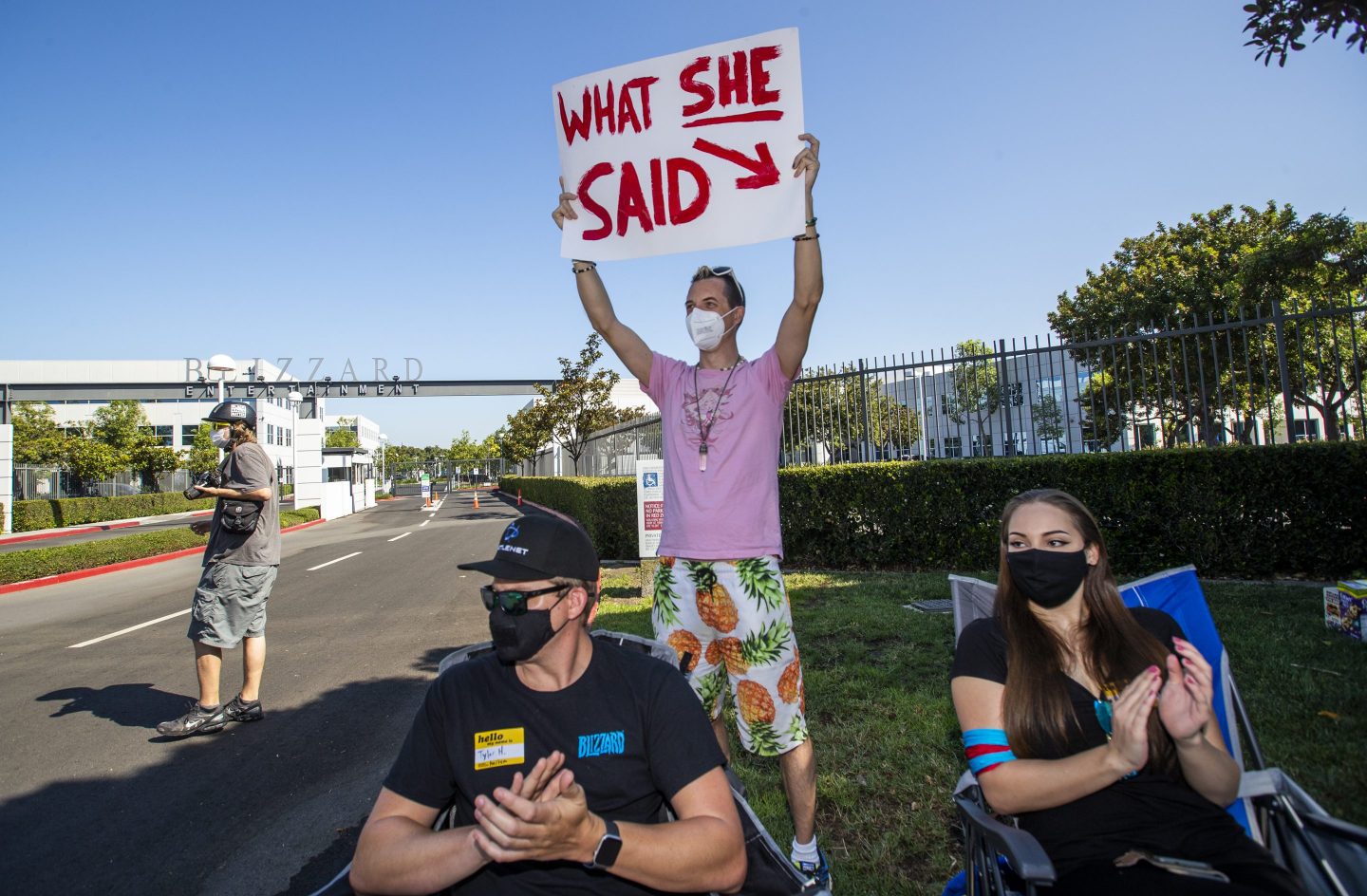 Several hundred Activision Blizzard employees stage a walkout outside the gate at Activision Blizzard headquarters on July 28, 2021 in Irvine, Cali., to signal their disgust with the company's response to a harassment lawsuit.
Allen J. Schaben—Los Angeles Times via Getty Images

– Blindsided at Blizzard. Fortune this morning published a new story about the allegedly toxic culture at Activision Blizzard that paints a fuller picture of what it’s like to work at the $68 billion video game giant that Microsoft is in the process of acquiring. The story builds on accusations made public in a gender discrimination suit brought by the California Department of Fair Employment and Housing, which accused Activision of marginalizing women and subjecting them to “constant sexual harassment,” and by Wall Street Journal reporting that detailed CEO Bobby Kotick’s role in keeping misconduct quiet. (Kotick said he was transparent with the board and a company spokeswoman said Kotick wouldn’t have been informed about every report of misconduct, “nor would he reasonably be expected to have been updated on all personnel issues.”) Kotick, you may recall, will remain CEO of Activision after the Microsoft acquisition and is set to receive a $375 million bonus if the deal goes through.

Fortune contributor Courtney Rubin spoke with 29 former and current employees of Blizzard, the 31-year-old video game powerhouse whose parent Activision acquired in 2008. They claim women were bullied and demeaned from the moment they joined the company. Nicki Broderick, for example, says she encountered a line of Fireball Whisky shots on her desk on her very first day at the company—which coincided with her 21st birthday—and felt pressured to down them alongside her boss. Women say they were ogled by male colleagues, ranked on a spreadsheet according to their looks, groped at company parties, and subjected to jokes about rape and sex trafficking. When they complained, HR downplayed their grievances. (Broderick claims the department called her a “brat” for asking to be switched to a new manager.) The perpetrators of the abuse faced few obvious consequences.

Activision told Fortune its current company is not the Blizzard of the past, that few of the bad actors are still with the firm, and that current leadership “is focused on creating the best possible environment for every member of our team.” Microsoft declined to comment.

One aspect of the story that stuck out to me was how blindsided women were by their treatment at Blizzard. Some of the female employees were gaming fanatics just like their male colleagues. Blizzard was a dream job; the harassment was a disorienting dose of reality. Some women said they were tempted to excuse men’s bad behavior because they were all members of the same gamer club. “That’s why you’re there, is because you love gaming,” Cher Scarlett, a software engineer at Blizzard from August 2015 to August 2016, said. “It’s very confusing when you love something so much.”

I’ve written about this overlooked part of the #MeToo movement before; that women can love their work even if they despise their workplace. The good of a job can outweigh the bad and keep victims in unhealthy environments. Often times, that calculus eventually shifts, and they leave. That was the case for some women at another allegedly toxic workplace—the NFL. In a new story, Ramona Washington, a former production coordinator at NFL Network, who is Black, told the New York Times that she left the league in 2018 after her report of bias among managers was not addressed. (A league spokesperson denied Washington’s bias claim.) “We all love football, but if you work there every day, you learn it is not a place you feel good about,” she said.

In that sense, workplace discrimination and harassment can cheat women of the opportunity to follow their interests. Instead of making career decisions based on passion and purpose, they seek opportunities that offer what should be a given: safety and respect.

- And the nominees are... Yesterday's Oscar nominations came with some milestones we haven't noted yet. Kristen Stewart's best actress nomination for Spencer and Ariana DeBose's best supporting nod for West Side Story add both to the short list of openly queer performers to earn Oscar nominations. Jane Campion's best director nom for The Power of the Dog makes her the first woman to be nominated in the category twice.

- Go for gold. Eileen Gu, the American-born freestyle skier who competes for China, won her first Olympic gold in the new freeski big air event. Five women ski jumpers were disqualified over the fit of their jumpsuits, which sporting authorities said were too large and could give the athletes an advantage. Earlier this week, 15-year-old Russian figure skater Kamila Valieva became the first woman to land a quadruple jump at the Olympics.

- Shadow dissent. Justice Elena Kagan wrote the dissent in this week's 5-4 Supreme Court decision allowing Alabama to stop the lower court-ordered redrawing of congressional districts, blocking efforts to give more electoral power to Black voters. Kagan said the decision "forces Black Alabamians to suffer what under the law is clear vote dilution" and criticized the case's presence on the shadow docket rather than through full oral arguments. CNN

- Power shift. How did the balance of power in the tech industry start to shift toward workers? Advocacy, organizing, and legislation played a big part. Ifeoma Ozoma, an advocate behind California's Silenced No More Act, reflects on the legislative win. MIT Technology Review

'Nobody believed those teenagers:' Former NWSL coach Rory Dames was accused by youth players of misconduct decades ago. He coached his way to power and prominence anyway Washington Post

"By the time a book comes out, sometimes I really don’t remember the story anymore. I call my editor and say, ‘Oh, my God, I have an interview, what was that book about?’ Then when I start reading, I remember the story."

-Author Danielle Steel, who has published more than 190 books