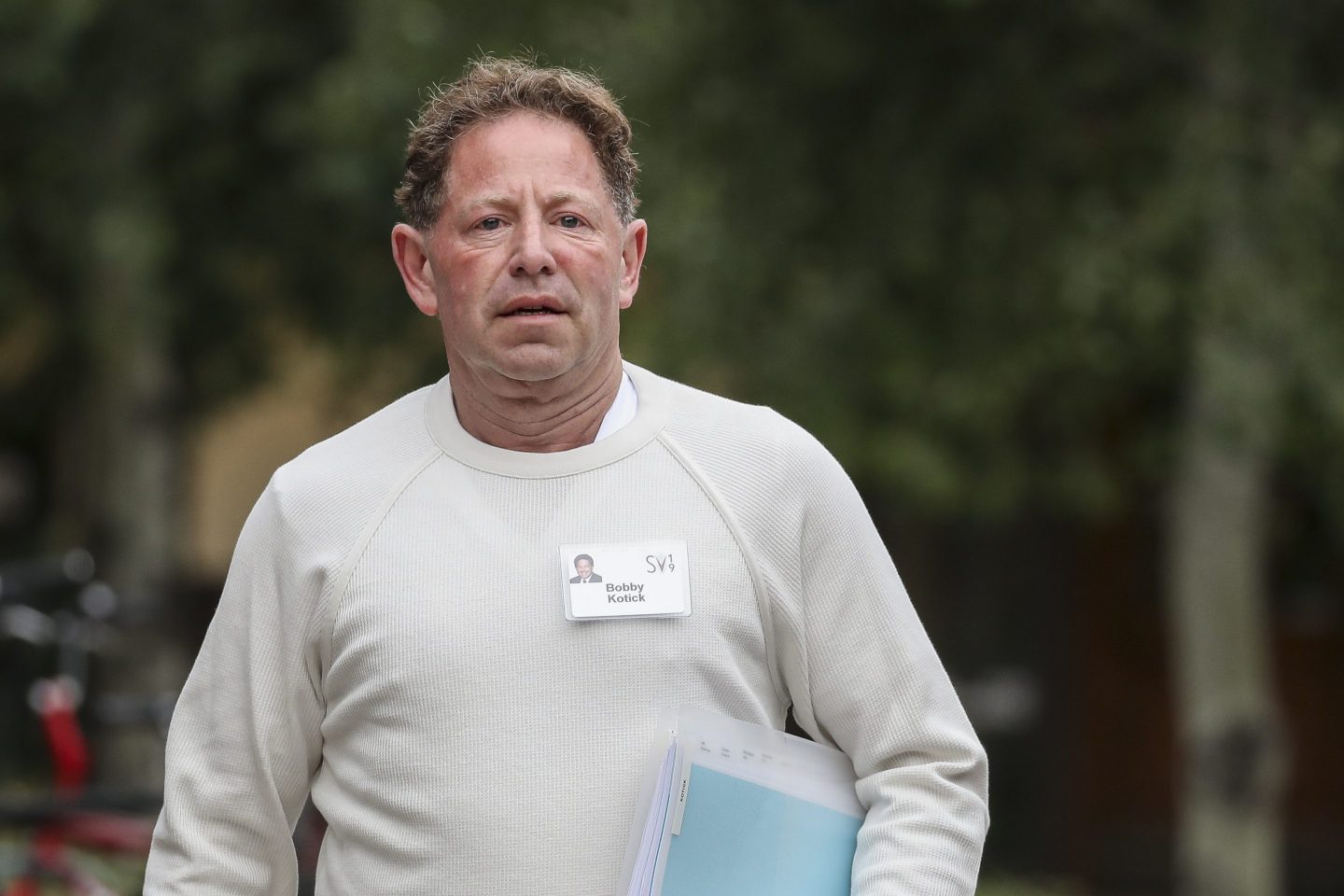 Investors’ concerns are mounting over the direction of Activision Blizzard Inc. under Chief Executive Officer Bobby Kotick, and a group of employees say it’s time for him to step down.

The company, known for hit video games like Call of Duty and World of Warcraft, has been in turmoil since the summer, when it was sued by California’s Department of Fair Employment and Housing over allegations of sexual harassment, unequal pay and retaliation. The agency described a “frat boy culture” at the company and accused leadership of failing to take action. Kotick’s plight worsened when the U.S. Securities and Exchange Commission later launched its own investigation into how the company handled the reports of misconduct.

The scandal has taken a toll on a company already struggling to adapt to the end of a pandemic-fueled video game boom. Earlier this month, Activision delayed two of its most anticipated games and gave a sales forecast for the fourth quarter that fell short of Wall Street’s expectations, sending the shares plunging the most in 13 years. Activision’s missteps allowed Roblox Corp., which began trading publicly earlier this year, to surpass it in market value, becoming the biggest U.S. video game company by that measure.

And that was before Tuesday, when the situation got even tougher for Kotick. Explosive revelations by the Wall Street Journal tie the CEO to allegations of mistreatment of women and suggest that he was aware for years of sexual misconduct, including rape, at the company but didn’t report it to the board. The newspaper cites interviews, company emails, regulatory requests and other internal documents in its reporting.

The Journal said that several women accused Kotick of mistreatment, both inside and outside the workplace, and that in some cases he worked to settle the complaints quickly and quietly. The SEC has issued subpoenas to high-ranking executives, including Kotick, according to the paper. Activision’s shares fell an additional 6.1% on Tuesday, marking a 36% decline from a February high.

Employees, who have for months said the company hasn’t gone far enough to address complaints, staged a walkout at Blizzard’s offices in Irvine, California, on Tuesday and called for Kotick’s resignation. About 150 people showed up, carrying signs that said: “Does Zero-Tolerance Apply to the C-Suite?” and “Unaccountable Corporate Bureaucrats are Driving the Best Employees out of Activision Blizzard.”

Activision’s 10-member board, which includes two women, said it remains confident that Kotick “appropriately addressed workplace issues brought to his attention,” and said it has faith in his leadership. However, he is unlikely to retain that support if any more bad news comes to light, said a person close to a board member, who asked not to be identified discussing private conversations.

The accusations against Kotick, especially that he withheld important details from the board, put his job in jeopardy, governance experts said.

“In the current political environment, we’ve seen so many people step down or be forced to resign because of their potential knowledge of misconduct,” said Jill Fisch, a professor at the University of Pennsylvania Law School. While sexual misconduct in corporations “is a hot button issue right now,” the situation at Activision adds another layer of complexity in that “there is an independent concern here about hiding information from the board.”

Kotick also sits on the boards of the Coca-Cola Co. and the Hawks Foundation. He is listed as a trustee for the Center for Early Education and the Harvard-Westlake School, according to data compiled by Bloomberg. A Coca-Cola representative didn’t immediately respond to a request for comment on Kotick’s status as a board member.

The 58-year-old Kotick launched his first company, a software developer, while still a student at the University of Michigan. In 1990, he and partner Brian Kelly bought control of a nearly bankrupt video game maker called Mediagenic and changed its name back to Activision. He has led Activision since 1992 and oversaw the incorporation of Blizzard Entertainment Inc. and a raft of other studios such as Candy Crush maker King Digital, allowing them to operate mostly independently as part of a strategy to encourage the development of hit games.

As a result, games like Diablo and Warcraft, are among the most acclaimed on the market. The Blizzard division was regularly ranked among the best places to work and served as a shining example of how to build a long-running game studio.

So when the California lawsuit landed last summer, it sent shockwaves through the gaming world and broader public for the graphic images it portrayed about Blizzard— including “cube crawls,” in which male employees “drink copious amounts of alcohol as they crawl their way through various cubicles in the office and often engage in inappropriate behavior toward female employees.”

But to many within the company, it was no secret that partying and sexism were long part of Blizzard’s office culture. Dozens of employees spoke to Bloomberg and recounted episodes of women getting accosted for dates at the office, being subjected to alcohol-fueled hazing rituals and watching male colleagues use company events as an opportunity to solicit sex. Six women said they reported incidents to Blizzard’s HR department and saw no results.

Video game companies were late to the global reckoning prompted by the #MeToo movement, which led to the ouster of prominent leaders across industries. In 2018, veteran CBS Corp. CEO Les Moonves was forced out after more than a dozen women accused him of sexual misconduct, and he was stripped of his $120 million severance package.

Chiefs at Barnes & Noble Inc. and Lululemon Athletica Inc. were ousted for sexual harassment allegations as well, and CEOs at Intel Corp. and the REI outdoor-equipment chain both resigned after news of consensual relationships with employees emerged, underscoring the changes in expectations for work environments. Microsoft Corp.’s Bill Gates also was tainted by scandal. The Wall Street Journal reported that the board found that the software billionaire’s involvement with a female employee almost two decades ago was inappropriate and decided last year that he would have to step down as a director.

In the past year and a half, the video game industry began to have its own reckoning, prompted by an outpouring of allegations on social media in 2020. Ubisoft Entertainment SA, the French gaming giant behind blockbuster titles ranging from Assassin’s Creed to Far Cry, faced allegations of widespread sexual misconduct at the company last year that shook the family founders’ inner circle and raised major concerns about how the business was managed.

While three high-ranking executives were ousted at Ubisoft, Yves Guillemot, the co-founder and CEO since 1988, remains in place, protected by four brothers on the board. Collectively the siblings hold 21% of the company’s stock. In February, Riot Games Inc. was sued by a former executive assistant of CEO Nicolo Laurent who alleges she was fired because she refused to have sex with him.

If Kotick were to leave, the company has several potential successors waiting in the wings. They include Chief Operating Officer Daniel Alegre, who joined Activision as Kotick’s top lieutenant last year from Alphabet Inc.’s Google, and Chief Finance Officer Armin Zerza, who rose through the ranks at subsidiary Blizzard Entertainment before moving to the corporate office in 2019. Zerza, who came from Procter & Gamble Co., became close to Kotick and helped enact the CEO’s  vision at Blizzard.

The July lawsuit from California’s employment watchdog and earlier  protests by employees this summer spurred Activision into action. Kotick apologized, and the company has waged a public relations campaign to highlight measures taken to make it more inclusive and welcoming to its nearly 10,000 employees. In August, Blizzard President J. Allen Brack was ousted, in addition to a human resources executive. And in September, Activision agreed to pay $18 million in a settlement with the U.S. Equal Employment Opportunity Commission over its workplace practices.

Last month, the company said more than 20 staff “ exited” and at least 20 others have received disciplinary action as part of an internal investigation. Activision called off plans to hold its biggest annual convention, BlizzCon, in February. And Kotick agreed to cut his total compensation by 99.9%, to $62,500, until the company achieves goals on increasing diversity.

On Tuesday, Kotick doubled down on his defense of the company’s action. In a video to employees seen by Bloomberg he said, “Anyone who doubts my conviction to be the most welcoming and inclusive workplace doesn’t really appreciate how important this is to me.”

But Kotick’s efforts may be too little, too late. On Tuesday, a new shareholder suit filed accuses Activision Blizzard’s leadership of fostering and engendering “a culture that permitted rampant sexual and racial harassment and discrimination.”

It says the publisher’s directors and officers also failed to tell investors about state and federal investigations into its allegedly discriminatory workplace culture for more than two years, instead referencing “routine claims and lawsuits” in its securities filings, according to the partially redacted complaint filed in the U.S. District Court for the Central District of California.