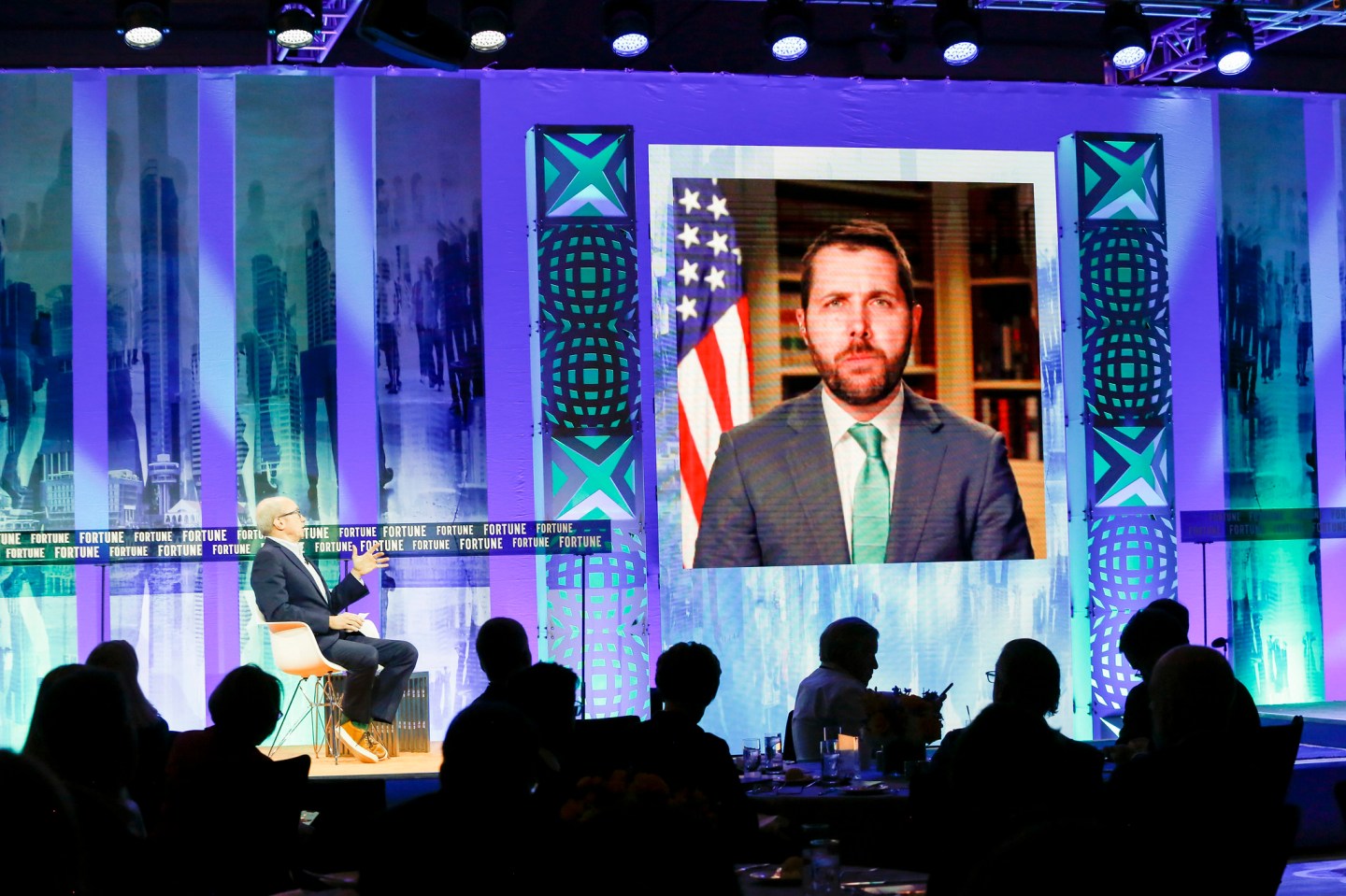 Following Monday’s signing of the bipartisan $1.2 trillion infrastructure bill, President Joe Biden and his allies are hoping the House will pass his larger Build Back Better reconciliation plan sometime this week. Should that piece of legislation go through, millions of Americans could benefit from increased investment in housing, education, and childcare, among many other provisions.

But how would both of those bills, should the Build Back Better plan pass, help curb inflation, bring more people back to work, and fix the nation’s supply chain issues? That question was posed to White House National Economic Council Director Brian Deese at the Fortune CEO Initiative conference in Washington, D.C. on Tuesday, and he started by pointing out the successes the administration has already had during its first year.

“We were seeing 60% increase in hunger, 60% decline in air travel, 200,000 people a day contracting COVID, nobody with the vaccination—we’ve really made remarkable progress,” he said. “We’ve made remarkable progress economically, as well. We have the strongest and fastest economic growth of any major developed country in the world […] We’re the only country that has actually reached and exceeded our pre-pandemic GDP level, one of the strongest labor market recoveries in modern American history, the unemployment rate down to 4.6%, so we have a lot of momentum in this recovery.”

Deese acknowledged that “we’re not going to upgrade our ports overnight” but noted that Los Angeles and Long Beach have already made strides in reducing the amount of time that containers sit idle on their docks. To illustrate that many of the investments in the Build Back Better plan are tied to the economy, he focused on childcare and affordable housing as areas where investment will lead to a more robust workforce.

“The ability to have quality childcare, as I mentioned before, quality care for an elderly parent, is one of the biggest pain points for a lot of working parents and women to get back into the labor force,” he said. “Housing, we need to build more affordable housing supply in this country. That will reduce price pressures but also open up more economic opportunities because we know that a lot of the opportunity for somebody to move to a new job or a new economic opportunity is constrained today because they can’t find an affordable place to live. Investing in housing supply now will help reduce those price pressures going forward as well.”

Deese focused on housing as an area that could have a particularly quick impact on the nation, as well as one that could help boost confidence in the Democratic party before the midterm elections next year.

“It’s connected to our construction industry,” he said. “It’s, of course, the case that it takes 12, 18, 24 months of forward investment to build housing supply, but if we don’t start making those investments now, we’re gonna find ourselves 12, 24, 36 months behind. If we start to make them now, we could start to see real impacts into 2022 and beyond. So, even these things that operate in the medium term, the sooner we get them going, the sooner we start to move out and give the private sector and businesses certainty that the incentives are going to be there, the better we’ll be.”

Speaking about the longer-term programs, Deese pointed to several investments that would help the bills pay for themselves. He said they’re focused on “human capital” and “high-value, high-productivity areas” that, over time, will produce a return on investment. He specifically noted universal preschool as a huge benefit to workforce productivity, and that creating incentives for companies to move towards zero-carbon energy will make “the United States the locus of innovation there.”

“All of those elements are long-term investments, and they’re paid for by long-term reforms, permanent reforms to our corporate and individual tax system,” he said. “We’re confident that you’ll see that this is paid for. Of course, there will be future pieces of legislation that may attempt to modify or change this. One of the things that President Biden has been very clear on is he wants to see all of that paid for — not just this piece of legislation, but future pieces of legislation as well. That’s one of the principles that he has brought to this conversation from the get-go is, ‘Let’s try, wherever we can, to find common ground but also to pay for things over the long term.’”

The infrastructure bill, Deese said, also sends a message to the rest of the world, particularly China, that the U.S. will soon be in a much stronger position economically. “A big impact of this is going to be in terms of our geopolitical impact around the world — not simply because we’ll help to improve supply chains, but also because the President can now more confidently assert to our allies, as well as the Chinese, that we are capable of getting something done here domestically,” he said.

Deese also touched on Biden’s Monday-night talk with Chinese President Xi Jinping, saying it was to improve relations in “strategic military, geopolitical and economic” issues and foster cooperation where possible. Noting that it’s not a “Cold War relationship,” he said, “What we’re going to look to do is to work with our allies and our partners to meet the threats that China poses, whether that’s to our intellectual property and our security or to our trading relationship [and] meet those in a way where we are bringing multilateral strength to the table. We’ll look to make common progress wherever we can, even as we highlight areas where we have ongoing and quite significant difference.”

As for Build Back Better, Deese didn’t offer any insights as to how negotiations were going with the big holdouts in the Senate, Joe Manchin and Kyrsten Sinema. He did, however, say that the bill is “paid for” and “would actually reduce deficits over the long term.” He offered up a lighthearted, optimistic outlook on the bill’s passage, with little in the way of specifics.

“It’s getting some muscle memory back in Washington, D.C. We haven’t done a bill that actually attempts and succeeds in paying for the cost over the long term in some time,” he said. “But we are confident of that and so we’re looking to get a vote in the House here. Then we’ll move to the Senate and are looking to try to advance the bill through the Senate before the end of year.”