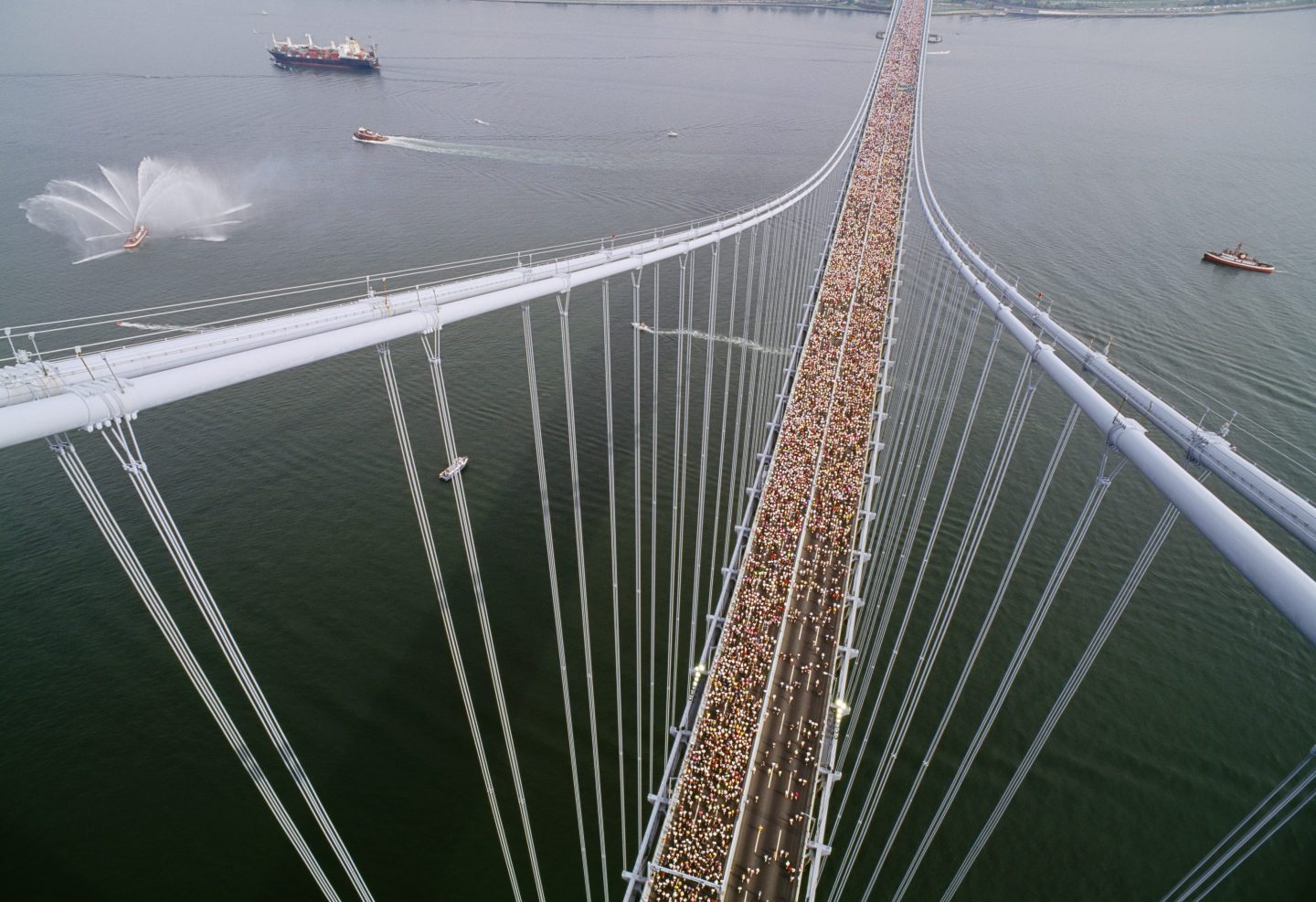 Runners crossing the Verrazzano-Narrows Bridge from Staten Island into Brooklyn at the start of the New York City Marathon.
Getty Images

This year’s New York City Marathon will prove a major milestone in the metropolis’s comeback from a pandemic that has sidelined the city’s marquee events for more than a year. It will be the city’s largest public event since the COVID-19 pandemic shut New York down—and special for other reasons as well: The race will be the 50th running of the world’s largest marathon and the first major marathon ever overseen by a Black race director.

While Ted Metellus—who also oversees the New York Road Runners’ other 50-plus races a year—isn’t nervous, he does understand the importance of this particular running of the New York City Marathon, the Bronx native’s first since taking the race director reins in February.

“It’s everything,” Metellus, 47, tells Fortune. “Coming back post COVID is the culmination of a year’s worth of hard work and dedication.” New York Road Runners (NYRR) wasn’t sure until May that there would even be a marathon this year. Ultimately, because of rising vaccination rates and lower infection rates in the spring, the state and city gave NYRR the green light to go ahead with the race, the running organization’s biggest annual source of revenue by a wide margin, but an event that will look very different this year.

Putting on a race that usually draws more than 50,000 runners and more than 1 million spectators along its 26.2-mile course through the city’s five boroughs has entailed a lot of new practices and the tweaking of older ones, testing the rookie race director.

First, he and the team he oversees made the decision to have a much smaller race this year, with 30,000 participants. “It naturally creates social distancing and space for the athletes across the board,” Metellus says. New York City’s marathon is a particularly complex one because the race has to get those tens of thousands of athletes to Staten Island, where it starts and where people crowd while they wait for their group to begin running.

This year, that need for social distancing led Metellus, a two-time New York City marathon runner himself, to add another wave of runners to the four in 2019, and increase the time between waves to avoid crowding on the course. And even if there are 40% fewer runners this year, there will be the same number of portable toilets as in previous years, and the same number of boats and buses to shepherd people to Staten Island.

It helps, of course, that a number of massive marathons have taken place in recent weeks without any sign they abetted the spread of the virus. Those successful, big-scale races have given NYRR some new proof points and shared best practices. In fact, last week, Metellus was on a regular conference call with his counterparts at the other major races to go over what worked and what didn’t. (London, for instance, had bottlenecks at the pre-race bag drop-off, where athletes can store items to retrieve post-race, while Boston’s new rolling start, in which runners just begin the race when they arrive at the starting line rather than waiting for a collective start was popular.)

In preparation for the marathon, Metellus says, NYRR had a lot more experience to draw upon compared with its peers, as it had already organized a year’s worth of in-person races starting last October of progressively larger sizes. Last fall and into the spring, NYRR held more than a dozen small races, initially with just a few hundred runners, building up to races in the summer with thousands, showing the organization what safety measures were effective and adhered to.

“One of the biggest advantages that we’ve had is that we’ve been producing events since September [2020],” says Metellus. “That really put us in a good rhythm going into this year and applying so many of the learnings.”

The New York City Marathon is the sport’s big beast and is always a complex operation. The race alone accounted for some 12% of all U.S. marathon finishes in 2019. And such a big field means a huge bib pick-up operation, a large expo at a major convention center, a start area that can serve tens of thousands of people, and of course street closings in America’s densest city, along with major security precautions.

This year, on top of all that, Metellus has to deal with new COVID protocols and practices. “All of the necessary safety components are still important,” he says. “One of the added pieces is the data and material around health and safety related to COVID, and how that ties in with touch points and logistics.”

In the footsteps of a Black running icon

While he is a first-time race director, Metellus does have a long track record in large-scale sporting events. He rejoined NYRR in 2018 as its senior director of events, 15 years after leaving a two-year stint at the organization in events management. During that interim, he worked at a number of race organizers including the Miami Marathon, Tough Mudder, Life Time events, and Ironman. In 2019, he was promoted and became the New York City Marathon’s technical director.

But in 2020, a long stewing rebellion among NYRR’s rank and file over what many employees saw as a lack of diversity in its upper ranks and a paucity of opportunities for Black employees came to a boil and led to the departure of NYRR’s chief executive and others. By February 2021, Metellus landed his current position, making him the first Black race director of a major marathon. And that is something he says is guiding him in how he approaches his job.

“I’m honored for the opportunity,” he says, noting that he is following in the footsteps of Ted Corbitt, a competitive African American long-distance runner who cofounded NYRR in 1958 and was its first president. At the same time, he says, he understands the push for more diversity in NYRR and in its races in a sport that still skews upper middle class and white.

Metellus predicts that the marathon will snap back to the pre-pandemic 50,000-runner level next year, with a lot of pent-up demand. More immediately, he has to pull off a successful New York City Marathon, both for NYRR and for the city at large’s well-being. Metellus worked the first marathon after 9/11 and understands the catharsis the race can give the city. “I remember how the city felt and how much the city was looking forward to something good,” he recalls. “I’m looking forward to that moment on November 7 when I’m standing there and I see everyone out there getting ready to start their journey.”