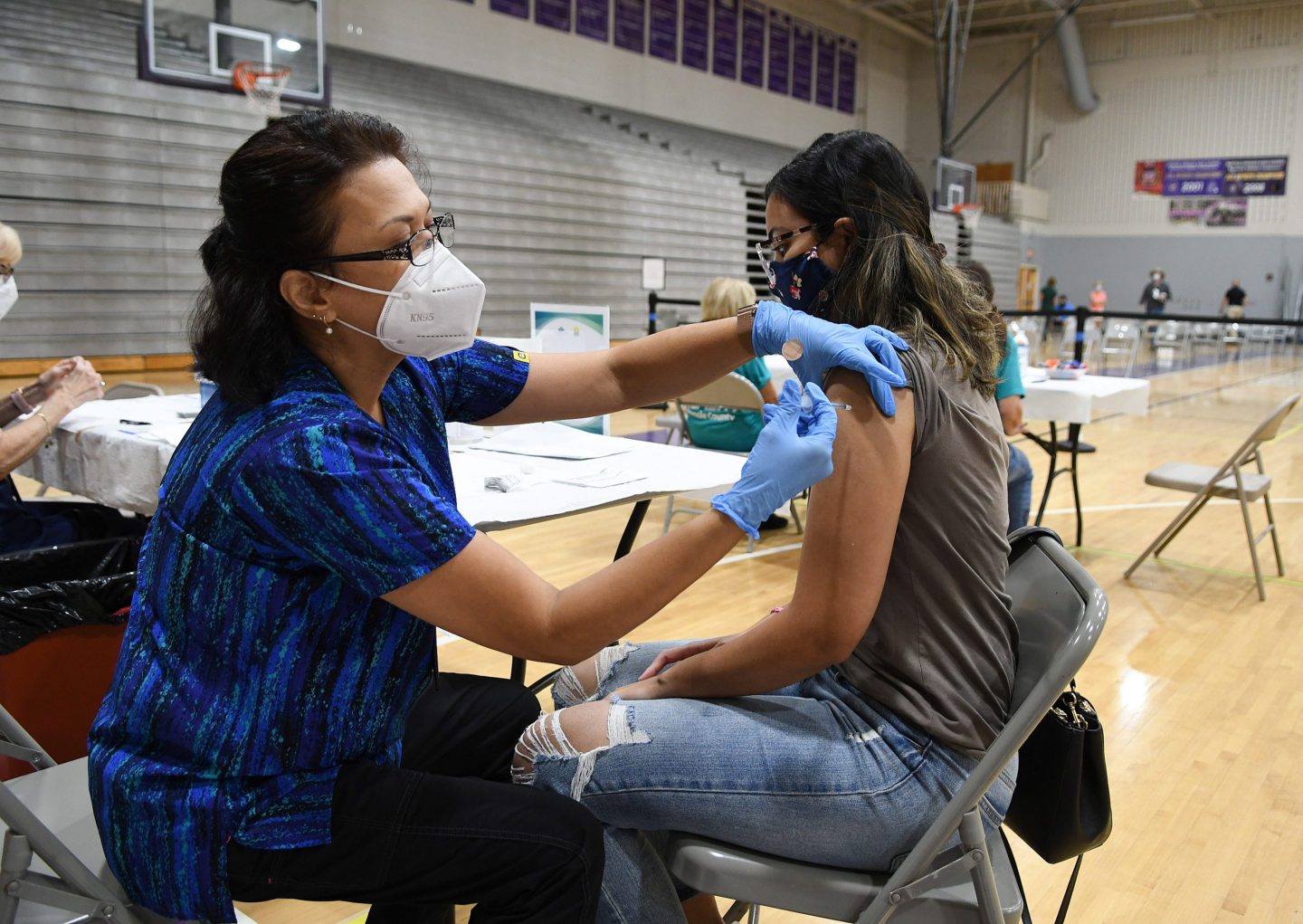 A nurse administers a dose of a COVID-19 vaccine in Winter Springs, Fla. Resistance to vaccine mandates by political leaders in some states, the authors write, is "an unplanned and deplorable experiment, which has turned vast populations into human subjects."
Paul Hennessy—SOPA Images/LightRocket/Getty Images

On July 4, 1776, the First Continental Congress appointed Thomas Jefferson, John Adams, and Benjamin Franklin to a committee to design “a seal for the United States of America.” The motto they proposed a month later was the Latin phrase “E Pluribus Unum,” which was adopted by Congress six years later. This founding spirit of unity is now being challenged, improbably and irresponsibly, by politically motivated responses to the public health crisis caused by the COVID-19 pandemic.

Some of these political voices reached a fever pitch last week as President Biden announced a unified national vaccine mandate for large employers in the aftermath of 650,000 deaths from the pandemic, which continues to devastate communities across the nation with 1,500 new deaths each day. (On Sept. 15, President Biden hosted a group of CEOs of major U.S. employers including Walt Disney, Microsoft, and Walgreens Boots, to compare approaches and work on the implementation his Covid-19 mandates.)  In South Carolina, the state currently with the highest COVID-19 case incidence and with more than 2,500 of its citizens currently hospitalized with COVID-19, Gov. Henry McMaster vowed to fight Biden and his party “to the gates of hell.” The regional outrage against such a mandate from twenty GOP governors, including those from the southern states of Texas, Florida, Georgia, Mississippi, and Alabama, is particularly appalling because these states have experienced disproportionately greater morbidity and mortality since the launch of the vaccines, as we show below.

The COVID pandemic in the U.S. has been met with widely divergent approaches and attitudes by state legislatures, governors, and other civic leaders like university presidents and clergymen. This divergence has created vast differences in health outcomes and turned the population of many states into unwitting human subjects of a large scale, unplanned experiment. Though there have been persistent disparities in U.S. health outcomes by region, ethnicity/race, gender, and socioeconomic status, the magnitude of these disparities pales in comparison with what we now see in the regional and state-by-state variation in the incidence of COVID-19 cases, hospitalizations, and deaths.

In December 2020 and early 2021, COVID-19 became the leading cause of death in the U.S., surpassing heart disease and cancer. The subsequent rapid deployment of COVID-19 vaccines in the early months sharply curtailed mortality, but as the vaccine uptake began to stall and the more infectious Delta variant spread throughout the country, COVID-19 re-emerged as the third leading cause of death in August 2021.

This is troubling enough, but it is shockingly more troubling to see the extent to which COVID-19-related health outcomes have diverged across states since March 2021, when vaccines became widely available. Based on data we obtained from CDC’s COVID Data Tracker site, the highest 7-day case incidence (South Carolina, as of Sept. 9) exceeded the lowest case incidence (Connecticut) by a factor of 6.2. The state with the largest total number of per capita hospitalizations since March 1, 2021 (Kentucky) exceeds the state with the lowest hospitalizations (Vermont) by a factor of 8.9. And Florida, the state with the highest per capita number of COVID-19 deaths since March 1, has a COVID mortality rate 8.4 times greater than Vermont’s.

The single, salient explanatory factor for these wide variances in COVID-19 morbidity and mortality across the states is vaccination. Politically motivated opposition to vaccines by several state governors and/or legislatures has caused vaccination rates to diverge substantially across states. The following chart shows the gap between two regions, New England and the South; the disparity between individual states, like Vermont (68% fully vaccinated) and Mississippi (40%), is even wider.

Our observation that the vaccination rate is the principal determinant of differences in health outcomes between states can be demonstrated using standard statistical methods, but it is also plainly visible in the charts below.

The following scatterplots show how well states with high vaccination rates have done against the Delta wave. First, note the strong (inverse) correlation between current vaccination percentage and the 7-day case incidence per 100,000 people.

The previous chart is a recent snapshot of health outcomes, but the pattern is essentially the same when we consider severe outcomes of COVID-19. The next scatterplot shows the correlation between vaccination rate and the total number of hospitalizations per 100,000 people since March 1, 2021.

The most devastating consequence of politically motivated opposition to vaccines emerges in the chart below, which shows that states with low vaccination have experienced mortality rates 6 to 8 times higher than states with high vaccination:

This is an unplanned and deplorable experiment, which has turned vast populations into human subjects. Politicians opposed to the vaccine will continue to ignore these facts; the question is whether their constituents will pay attention. Recent surveys are not encouraging. In a global survey of 15 countries, Morning Consult found their U.S. sample to be the second most resistant (after Russia) to COVID-19 vaccines, with 27% of the population being “uncertain” (10%) or “unwilling” (17%) to accept a vaccine.

The response of higher education and business leaders

This stark divide in response to the pandemic is also reflected in the adoption of vaccine mandates at colleges and universities in each state. Higher education institutions in New England states such as Connecticut (80%), Rhode Island (79%), and Massachusetts (51%) have gone considerably farther in adopting mandates than those in southern states such as Georgia (5%), South Carolina (3%), Texas (2%), and Florida (less than 1%), as shown in the chart below.  In several of these states, the absence of mask mandates in public universities is the result of prohibitions imposed by the state.

Against this backdrop of deep political rift, it is impressive that many business leaders have adopted vaccine mandates for their organizations. Even before President Biden’s new national mandate plan for large employers, last month over 50 of the nation’s largest firms, including Disney, Microsoft, Norwegian Cruise Lines, Johnson & Johnson, Moderna, United Airlines, Goldman Sachs, and Walmart, had adopted vaccine requirements.

Adopting this constructive approach, the Business Roundtable, representing 200 major employers, announced this weekend, “The Business Roundtable welcomes the Biden administration’s continued vigilance in the fight against COVID-19. America’s business leaders know how critical vaccination and testing are in defeating the pandemic.”

In contrast to state politicians, there appear to be no regional divides in how the business community sees the pandemic. Business leaders around the nation do not want unsafe workplaces, absenteeism, or sick, angry communities. Nor do they wish to see the pandemic continue to thwart economic growth. It is tragic that many political leaders have hitched their ambitions to the wagon of vaccine resistance, imposing enormous and harmful externalities on the entire nation. There is strong evidence that COVID-19 vaccines save lives—a recent, large CDC study, conducted across 13 U.S. jurisdictions, found that unvaccinated people are 11 times more likely than vaccinated people to die of COVID-19. A recent Harris Poll found that fully 80% of Americans resent those who choose to remain unvaccinated, with the unvaccinated the most often-blamed source of the Delta variation surge.

Political leaders who oppose vaccines bear moral responsibility for the tens of thousands of deaths that could have been prevented with vaccines. It remains to be seen if their constituents will repudiate the politicians who oppose both science and the overwhelming evidence, but in the meantime it is necessary and urgent for institutions across the country to embrace vaccine mandates. Perhaps, in contrast to the accusation in the film A Few Good Men, Americans can handle the truth.