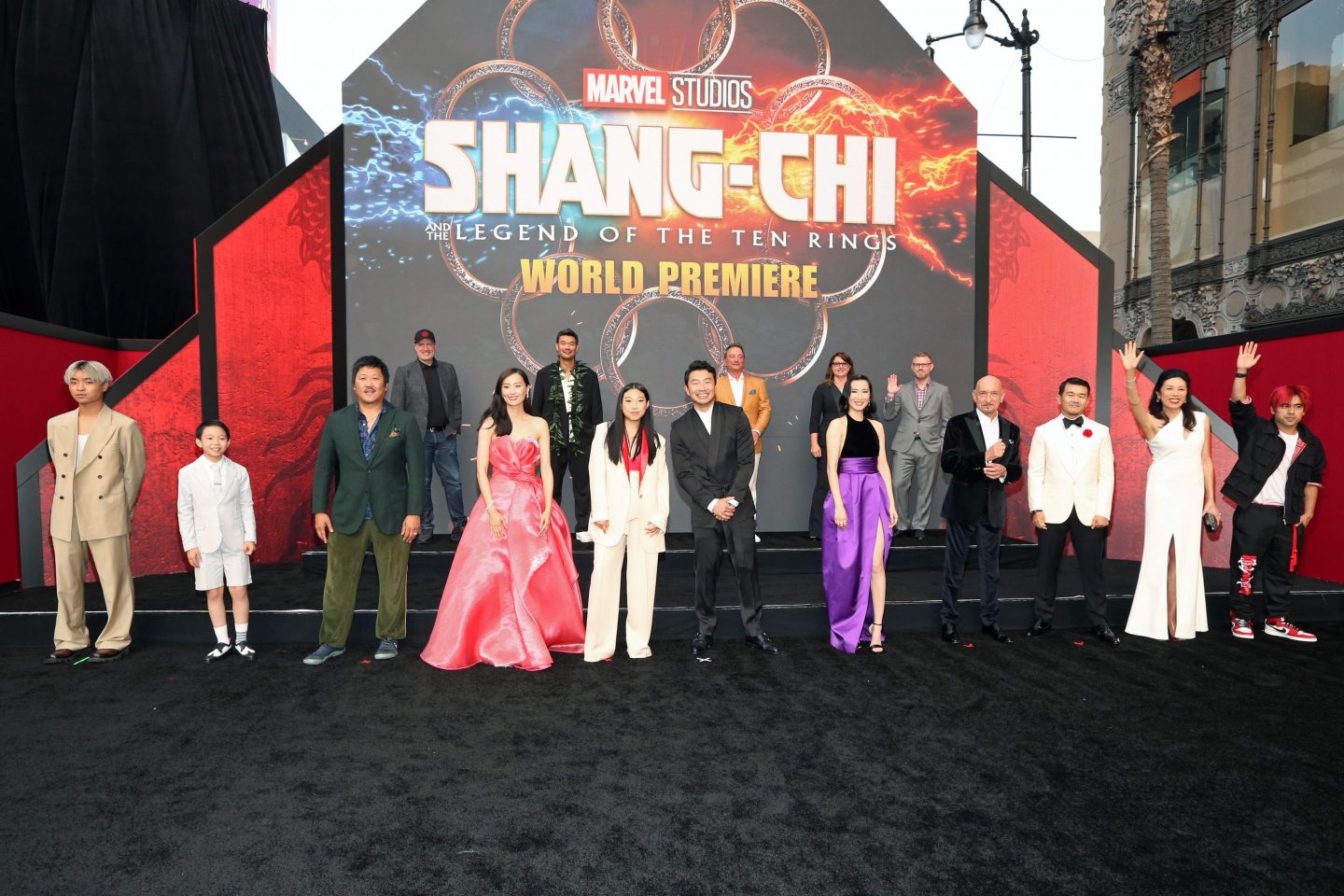 “Shang-Chi and the Legend of the Ten Rings” had a blockbuster release in both the U.S. and global markets—yet has not been approved for release in China.
Jesse Grant—Getty Images for Disney

The movie, based on the Marvel comic-book series of the same name, follows the story of Shang-Chi, played by Simu Liu, as he battles the tyrannical grasp of his father, Xu Wenwu, played by Tony Leung. In the movie, Shang-Chi is pushed out of his relatively comfortable San Francisco life to his family home in China, where he embarks on a superhero journey to save his family and, ultimately, the world.

Critics have hailed the film as a landmark moment for Asian and Asian American representation in Hollywood. The movie has earned praise for deftly incorporating elements of Chinese culture and seamlessly interspersing dialogue in Mandarin Chinese.

It has also proven a smash hit at the box office. The movie grossed $94 million over Labor Day weekend in the U.S., three times the previous Labor Day record of $30.5 million set by slasher film Halloween in 2007. After factoring in global revenue, the film has already broken even, boosted by strong openings in markets like Hong Kong, where the movie set a record for the largest-ever weekend opening in September.

But even with a cast of superstars who are well-known in China like Leung and Michelle Yeoh, star of Crouching Tiger, Hidden Dragon, audiences in China have not been able to see the film, because Chinese censors have yet to approve it and schedule its mainland China release.

Disney and Chinese regulators did not respond to Fortune’s requests for comment on if or when the movie may be shown in China.

Shang-Chi’s absence from the big screen in China could cost Disney tens of millions of dollars—if not more—in lost revenue, says Stanley Rosen, a professor of Chinese politics and film at the University of Southern California. He said that Disney likely made the film expecting a China release, and the filmmakers appear to have gone to great lengths to ensure that it was respectful of Chinese culture and could pass censorship review.

But Shang-Chi has stirred controversy in China since it was first announced, owing, in large part, to the racist origins of the comic book it’s based on. For now, it seems that the movie plot’s extensive deviation from the original comic book and praise from Chinese audiences and critics abroad may not be enough to win over regulators, suggesting that China’s film regulators are becoming less accepting of Hollywood’s depictions of the country.

Shang-Chi is based on a comic series that Marvel first published in 1972.

In the original story, the protagonist Shang-Chi was the son of Fu Manchu, a villainous character created by English author Sax Rohmer in 1913. Fu Manchu popularized anti-Asian stereotypes and became a symbol for racist “yellow peril” fears in the U.S. that suggested the rise of Asia would pose an existential threat to the West.

In Disney’s Shang-Chi movie, Fu Manchu was replaced by Leung’s character, Xu, based on the Marvel comics character the Mandarin. Still, even before its release, government-backed outlets in China accused the filmmakers of attempting to gloss over the racist origins of the story.

“While the names have changed, everyone knows that they are the same character,” the Global Times, a state-backed tabloid, wrote in 2019. Prominent Chinese social media accounts, like one associated with the Communist Youth League, similarly condemned the film on China’s Twitter-like Weibo when it was announced. But more recently, some Weibo users outside China have urged people not to criticize the film until they get a chance to see it.

On the eve of the movie’s August premiere in Los Angeles, Marvel president Kevin Feige told top Chinese film critic Raymond Zhou that Leung’s character had nothing to do with Fu Manchu.

“Definitively, Fu Manchu is not in this movie, is not Shang-Chi’s father, and again, is not even a Marvel character, and hasn’t been for decades,” Feige said.

On Weibo, Zhou said Feige’s answer was direct and clear, but some Chinese users criticized Feige’s comments as simply a last-ditch attempt to boost revenue in China.

“I would not expect [Shang-Chi] to be approved at this point,” says Rosen. “There’s no real benefit [for China to approve it] other than for Marvel fans that want to see it…Given the origin story of Shang-Chi, I think there’d be an equal number of nationalistic people in China who would say, ‘Why are you approving this film?’”

Shan Dongbing, a Beijing-based film producer, is more bullish, arguing that regulators will likely appreciate the lengths Disney filmmakers went to respect Chinese culture, such as excising Fu Manchu from the script. In his view, there’s still hope that the movie will be approved.

“Hong Kong’s positive response also helps a lot for the film bureau or senior officials to decide if they can approve the release here in China,” says Shan.

But Shang-Chi’s lack of approval thus far may be a sign that Chinese censors are becoming more discerning when it comes to approving Hollywood movies, especially ones that have any association with the country.

This November, Marvel Studios is planning to release Eternals. The ensemble superhero flick is not expected to showcase direct ties to China, but it’s directed by Chloé Zhao, whose speech at this year’s Oscars was censored in China after Chinese media criticized negative comments she made in 2013 about growing up in China. Like Shang-Chi, China has not set a release date yet for Eternals.

Industry sources say the relationship between China and Hollywood has ebbed and flowed for decades, with periods of tighter restrictions often followed by periods of opening up.

Now may be a tightening period.

Every foreign film in China must be approved by the Publicity Department of the Chinese Communist Party, also known as the government’s propaganda wing, which approves at most 34 foreign films per year for Chinese cinemas.

China’s government has not issued new rules recently for foreign films, but some of Beijing’s sweeping new restrictions on cultural products may hit the film industry. In recent months, Beijing has punished some celebrities for tax evasion and cracked down on the “chaotic” influence of celebrity fan clubs in China.

Shan says Beijing appears to be restructuring its entertainment industry away from Hollywood’s model that glorifies individual celebrities and promotes them as role models. Films like Shang-Chi may remain in limbo until regulations become more clear.

Marvel will likely be subject to the new scrutiny because the movie franchise is associated with fan culture, says Shan. Since first debuting Iron Man in China in 2008, Marvel has built a devoted fan base of millions, and Chinese movie watchers have accounted for 12%, or $2.23 billion, of Marvel’s global revenue.

Ultimately, China may grow pickier when it comes to accepting foreign films since it doesn’t need Hollywood as much as it once did.

This year, the world’s top-grossing film is Hi, Mom, a lighthearted family comedy that, despite opening almost exclusively to audiences in China, has beat the global revenue of major Hollywood films like the latest Fast and Furious installment F9: The Fast Saga and action film Godzilla vs. Kong. China has claimed the title of the world’s top-grossing box office since the beginning of the pandemic, partly owing to cinemas in the mainland reopening from pandemic closures faster than those in the West.

“Chinese film production has boomed in quantity and quality in the past few years,” says James McMahon, a lecturer and Chinese film expert at the University of Toronto. “The possibility of a blockbuster Chinese-themed foreign film is perhaps unappealing to the narrative the state wants to present about the competitiveness of 21st-century Chinese cinema.”