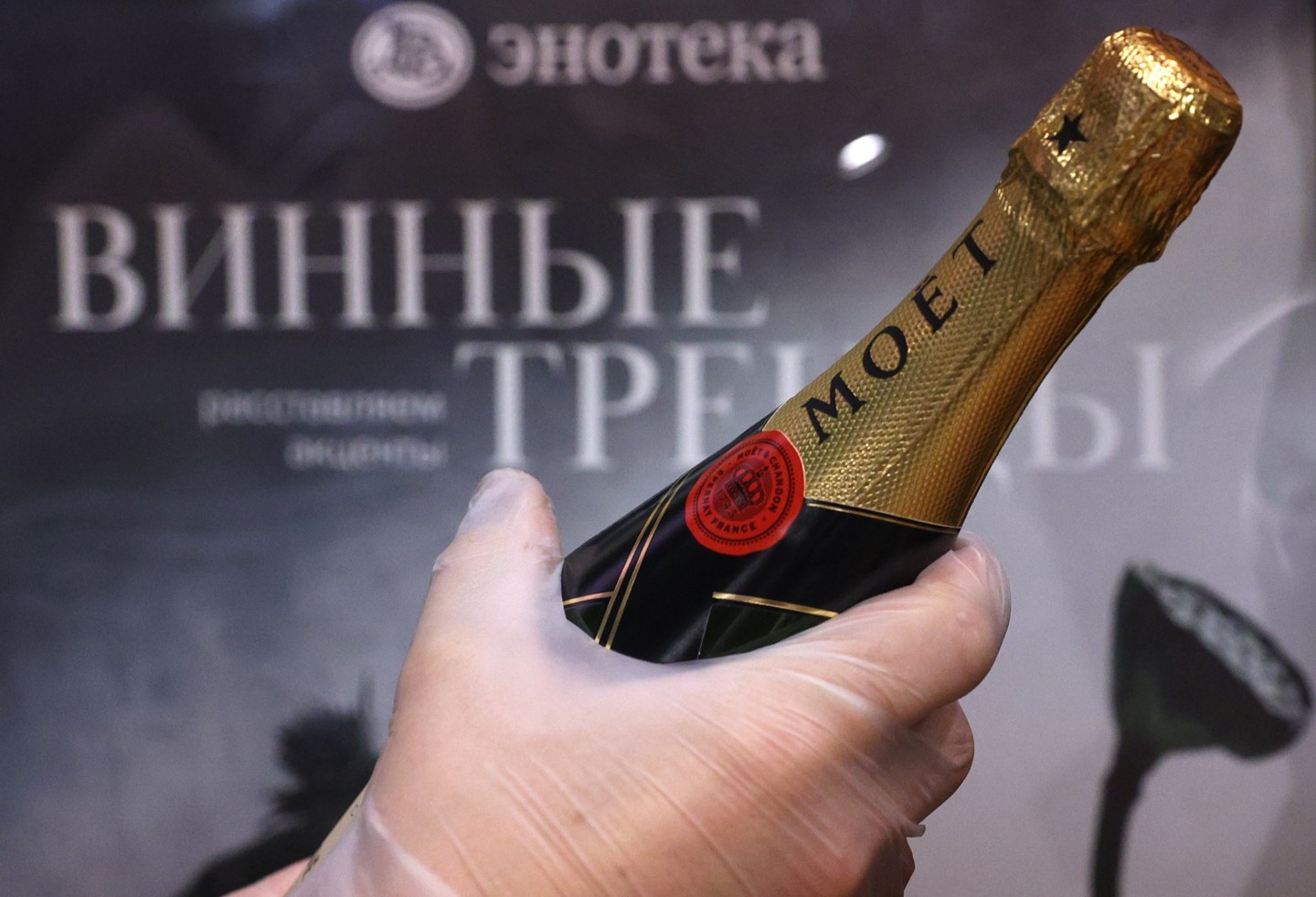 Moët Hennessy Champagne on sale at a Moscow supermarket. On July 2, 2021, President Vladimir Putin signed a new law allowing the term “Champagne” to be used only for sparkling wines produced in Russia and requiring all non-Russian producers, including the French, to add the “sparkling wine” label on the back of bottles delivered to Russia.
Sergei Bobylev—TASS/Getty Images

European countries are notoriously protective of the branding of their regional food and drink, and none more so than the French. So it’s understandable that heads are exploding like corks in the Champagne region right now.

That’s because, in what could be interpreted as a demonstration of high-level trolling, Russian President Vladimir Putin signed a law Friday that says only Russian makers of sparkling wine can call their product Shampanskoye—the Russian word for “Champagne”—on their Cyrillic-lettered labels.

The law still allows French Champagne producers to call the stuff “Champagne” on the front label, in Latin characters, but it requires them to call it “sparking wine” on the back label, in the lettering that will be more useful to most Russian consumers.

For a $5 billion regional sector that is more used to policing the branding of sparkling wines in other countries—the Comité Champagne (CIVC) producer organization once even tried to stop an Australian wine critic from calling herself “Champagne Jayne”—the Russian move is beyond the pale.

“Depriving the people of Champagne of the right to use the name ‘Champagne’ (in Cyrillic) is scandalous,” thundered CIVC cochairs Maxime Toubart and Jean-Marie Barillère in a Monday statement. “It is our common heritage.”

The organization is now calling for “French and European diplomacy” to right the perceived wrong. Franck Riester, the French trade minister, tweeted Monday that the government and the EU are “monitoring the implications of the new Russian wine law” and “will support our producers and excellence without fail.”

The CIVC has also asked proper Champagne producers to suspend shipments to Russia.

LVMH Moët Hennessy, the owner of prominent brands such as Dom Pérignon, Moët & Chandon, and Veuve Clicquot, has indeed suspended its Russian shipments in response to the new law. However, it seems the company is not doing so out of solidarity with the region’s pushback; instead, it’s going to change its labeling.

“The MH Champagne Maisons have always respected the legislation in force wherever they operate, and will resume deliveries as quickly as possible once these adjustments are made,” the company told Reuters. (LVMH Moët Hennessy later told Fortune that “this requirement has resulted in a temporary suspension of deliveries while the consequences of the new regulation are evaluated.”)

LVMH’s share price fell nearly 1% on Tuesday morning, though it has recovered slightly.

Fortune has asked the CIVC whether other Champagne producers have been more amenable to the embargo call, and will update this story if and when an answer appears.

Update: This story was updated on July 6 to include LVMH Moët Hennessy’s second statement.