COVID forced America to confront its shopping addiction. Can we break the habit? 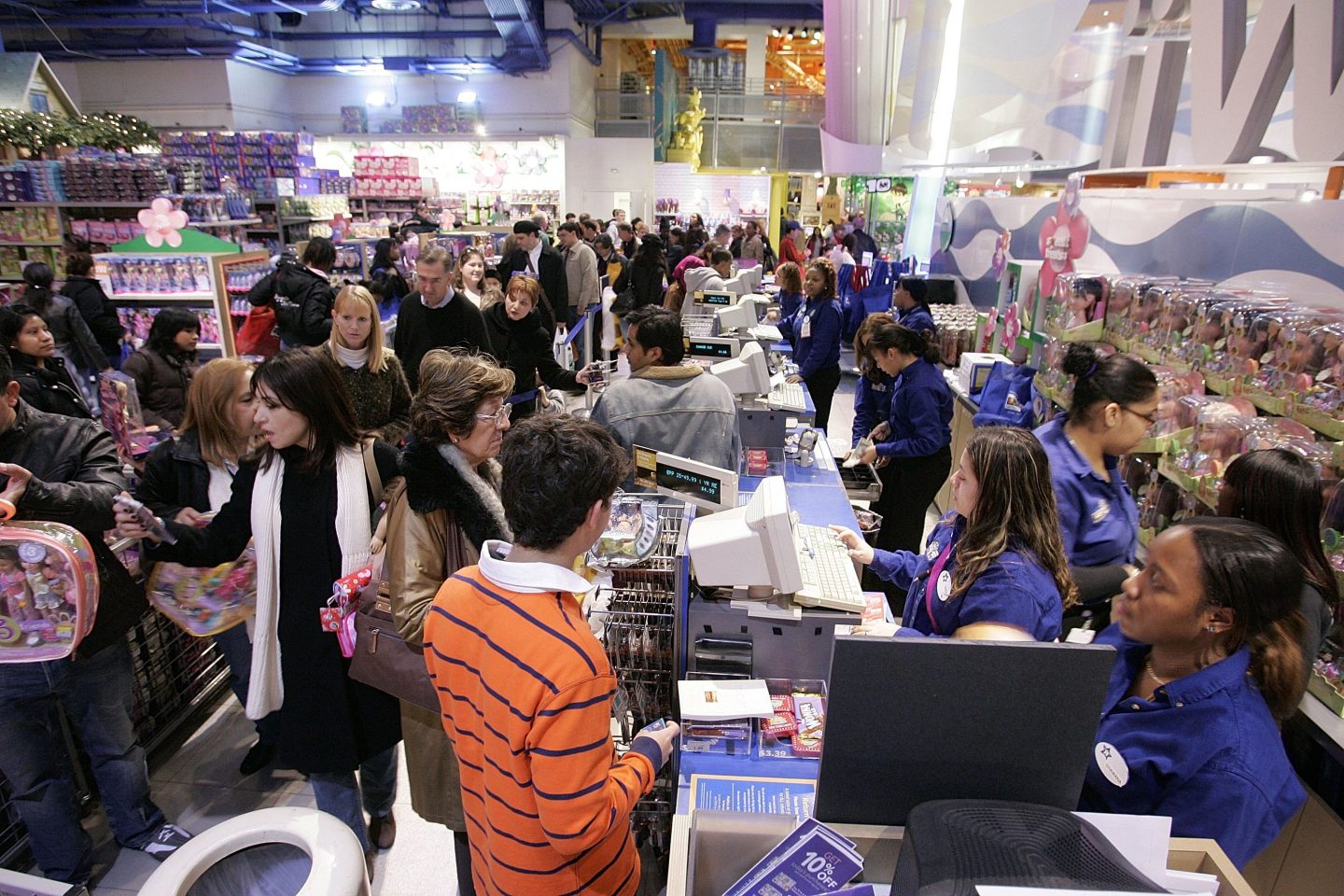 Black Friday shoppers at a toy store in New York City in 2006. “We are not the same people now as we were before the pandemic,” writes J.B. MacKinnon, “and to be asked to put those changes behind us and return to full-throttle consumption is insulting.”
Stephen Chernin—Getty Images

It never seems to be the right time to talk about our consumption problem. When the economy is strong, we’re told that slowing our ever-expanding appetite for goods, services, and experiences could turn the boom into a bust. When the bust comes, we hear that the solution is to get to back to the malls and shop.

So it is as we emerge from the darkest days of COVID-19. The clamor is rising for a “consumer-driven recovery” from the pandemic downturn, or even a binge of “revenge consumption” against the virus. Powerful forces are at work to make sure these calls are heeded, from a surge in advertising spending to government stimulus checks to reminders from lifestyle media that it’s time to follow trends again.

As always, we’re being asked to postpone a conversation about the dark side of consumerism. But to yield this time would be a terrible missed opportunity. Millions of people have just had deep reckonings with their values and priorities, and—maybe most importantly—the pandemic has offered glimpses of what life beyond consumer society could look like. What better time than now to grapple with our outsize appetites and their harmful impacts on the Earth and humankind?

We might start by reminding ourselves where things stood before the coronavirus emerged in late 2019. Earlier that year, a United Nations panel reported that sometime around the turn of the millennium, consumption surpassed global population growth as the greatest driver of our environmental crises. When it comes to climate change, species extinction, toxic pollution, water conservation, and other challenges, how much each one of us consumes matters more than how many of us there are.

Consider that the average person’s lifestyle in a rich country now demands 13 times as much oil, steel, wood, water, coal, and so on as the average lifestyle in a poorer one. That means that raising two children in a country such as the United States will eat up as many natural resources as having 26 kids in a nation like Bangladesh, Haiti, or Zambia. I’ve traveled widely (I’m an overconsumer), but I have yet to encounter such a large family anywhere on Earth.

While global consumption slowed during COVID shutdowns, we’ve already regained nearly the same breakneck pace we were at in the before-times. Nothing we have done to “green” this consumer appetite has been able to keep up with how quickly it is growing. Here and there we ban plastic bags or plastic straws; meanwhile, plastic production overall is set to expand by 40% in the next decade. “Sustainable fashion” is trending, but in the past 20 years, the number of garments purchased per person increased by 60%, while the life span of those clothes was cut nearly in half. The fraction of goods in circular systems—in which discarded products are cycled into new ones—is actually shrinking. The amount of raw materials pouring into the world economy is higher than ever.

The average American alone consumes so much that if everybody in the world lived the way they do, it would take five Earths to maintain such a global standard of living. The sheer volume of our consumption has led the World Resources Institute, a nonprofit environmental research outfit, to label it the new “elephant in the room”—dangerous, obvious, and yet somehow overlooked. The standout example is the fight against climate change. Over the past two decades, no environmental issue has benefited from more public attention, high-level action, or technological progress. Yet by 2019, the best we had achieved through efforts such as building bike lanes, inventing more energy-efficient light bulbs and appliances, and producing electricity with cleaner-burning natural gas instead of coal was to level off global emissions—at what was then a record high—for a few years in the mid-2010s. Then the consumer economy picked up steam worldwide, from the rise of the middle class in India to the supersizing of McMansions in America, and emissions started breaking records again. So far in modern history, the only times that global greenhouse gas emissions have actually declined have come amid major economic downturns—in other words, when the world stops shopping.

The raw power of consuming less became clear nearly the moment the pandemic lockdowns began. Consumer culture ground to a halt—and instantly, carbon emissions began their sharpest drop on record, tumbling nearly 9% in the first half of 2020. In a matter of days, skies turned a deeper blue—most strikingly, over the hazardously polluted Asian cities that produce many of the world’s manufactured goods. As the global economy shrank, it bent closer to being able to run on existing renewable energy supplies than ever before. There were visible signs of nature rebounding. My personal favorite was a group of American crocodiles photographed basking and body-surfing on a Mexican beach left empty by the retreat of mass tourism.

It wasn’t only the environment that changed under COVID-19. We did, too. Whether in the relative calm of quarantine or the depths of anxiety and sorrow, people worldwide questioned what matters most in life and where comfort and satisfaction really come from. Nearly everyone, I suspect, is emerging from the pandemic less hopped up to shop than to spend time with people they care about. Many others have a new appreciation for enjoying nature, expressing themselves creatively, or getting involved in issues larger than themselves.

This escape from what historian David Shi, a scholar of America’s simpler living traditions, once called “the prison of activities”—relentlessly overplanned and overscheduled lives—allowed people to learn firsthand what they truly value in consumer culture, and what they can easily live without. Many rediscovered low-consuming pleasures such as gardening, baking, and the art of conversation. Still others enjoyed freedom from social expectations around how they dress, and relief from constant pressure to keep up with the Joneses.

We are not the same people now as we were before the pandemic, and to be asked to put those changes behind us and return to full-throttle consumption is insulting. It’s the resources we found within ourselves and our communities, not consumerism, that got us through this catastrophe. “Go shopping” is as unsatisfactory a message today as it was when George W. Bush famously suggested it as a meaningful response to the 9/11 attacks. Fittingly, when this year’s Prime Day—the bogus shopping “holiday” invented by Amazon for its own benefit—arrived in June, we saw it meet with increasing social media pushback and mainstream critique.

On the other hand, we’ve also been talking too simply about simpler living. Catchphrases like “less is more” and “live simply” have always been glib, and seem even more so now that we’ve freshly seen how the pandemic pause in household spending led to joblessness and shuttered businesses. While there are good reasons for individuals to choose to buy less (from saving money to helping the planet to pursuing deeper values), if we really want to achieve a “deconsumer” society, we need to change the system itself.

How, for example, might we reverse the unpopular trend toward products that quickly fall apart, go out of fashion, or need an upgrade? One answer is to move toward a “buy less, buy better” economy in which we buy fewer things but ones that last longer. To get there, we could encourage consumers to pay a premium price for quality, though that hasn’t worked well in the past.

A better bet is taking concrete steps to help durable goods compete with disposable ones. We could make companies pay more of the health and environmental costs of pollution, including climate pollution, produced in their products’ manufacture—costs that are currently borne by society at large. We could pass laws mandating that goods be easily repairable, or require life-span labels that tell us how long the things we buy will last. Interestingly, some companies—having witnessed the clear environmental benefits of the COVID-19 consumer slowdown—were inspired to move toward a business model in which customers buy fewer new things. “The apparel industry is facing an overconsumption crisis,” Levi Strauss posted on its website recently in a momentous public acknowledgement by a major brand. The company was launching a mildly deconsumerist slogan (“Buy better. Wear longer.”) and will also sell more of its products secondhand.

Another tack might address income inequality. Research suggests that larger gaps between rich and poor aggravate consumerism by magnifying status differences, which cause us to spend more in pursuit of a dignified place in society, and by increasing feelings of insecurity, which tend to make us focus more on income and possessions. Income inequality is something concrete we can change. We know there are ways to spread wealth more evenly.

Strategies like these point to a future built more around quality than quantity when it comes to our stuff, services, and experiences. They also point to a quality of life that includes some of the good that we glimpsed in the pandemic—cleaner air and water, less materialistic values, a better relationship with nature. We won’t get there by wishing individual consumers will one day see the light. We get there by building a different world. The first step is to start talking about it.

J.B. MacKinnon is the author of the newly released book The Day the World Stops Shopping. This piece was written for Zócalo Public Square.