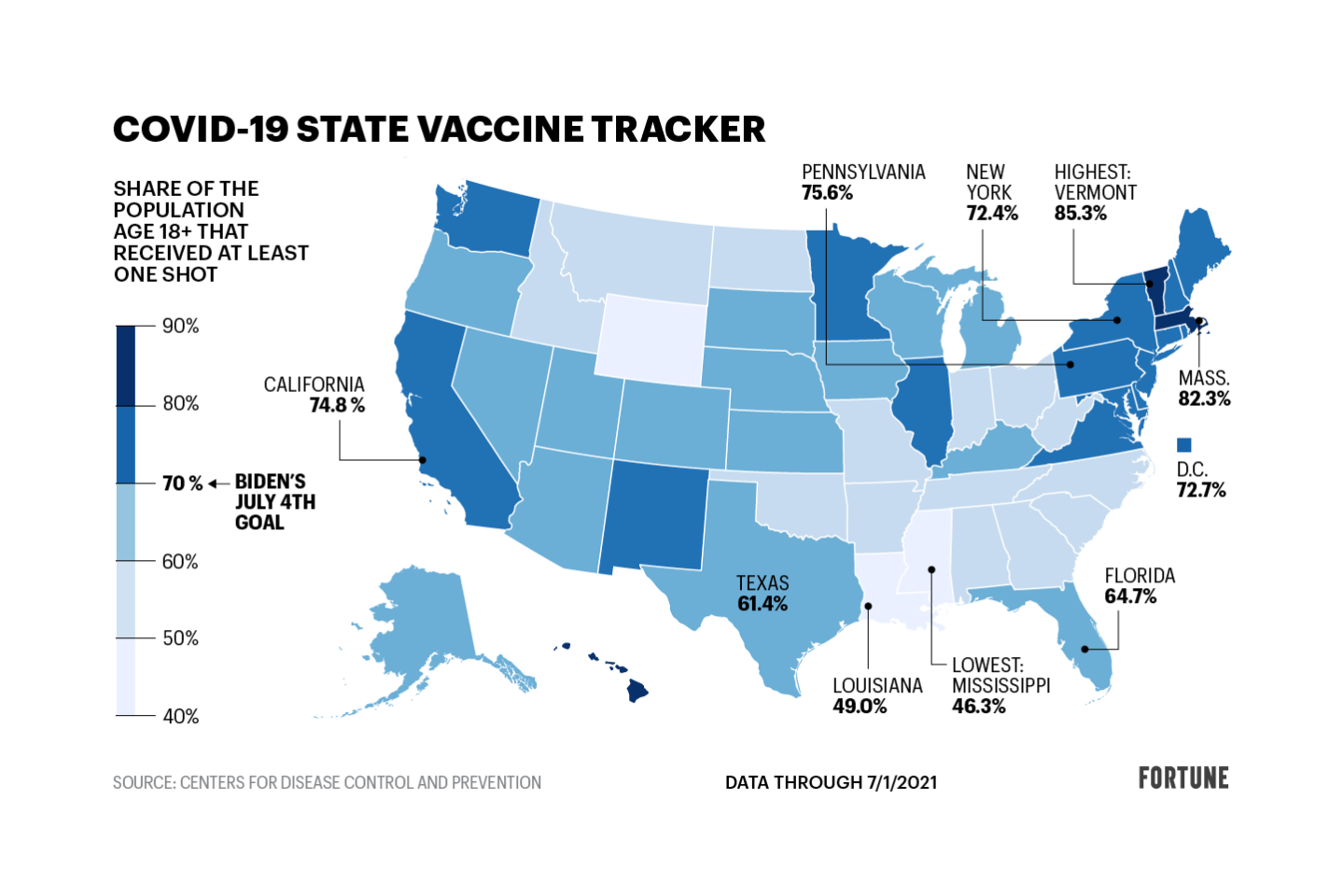 Heading into the July 4th holiday weekend, the country’s COVID vaccination rate is not what President Joe Biden had hoped it would be. He had conceded that days ago, when he acknowledged the country would fall short of his goal that 70% of American adults receive at least one shot by Independence Day. (Even so, American adults of legal age can still get a free beer to celebrate progress against the virus.)

As of Friday, July 2, the nation was at 66.8%, with 172.5 billion people over the age of 18 having received one dose of the vaccine, according to the Centers for Disease Control and Prevention. Across the broader population (including children), 54.7% of people have gotten one shot, and 47.1% of Americans are fully vaccinated. That puts the U.S. ahead of many countries in terms of the portion of citizens with some protection against the coronavirus, but behind a number of others, many in Europe, which got vaccines later and had more supply challenges than the U.S. In recent weeks, the progress of America’s rollout has slowed to a crawl due to flagging demand.

In all, the U.S. has administered 328.8 million of the 382.6 million vaccines distributed across the country.  The share of vaccinated residents continues to vary widely across the country, with 18 states, the District of Columbia, and Puerto Rico, all having reached Biden’s goal of having 70% of adults vaccinated. Oregon and Colorado, at a vaccination rate of 69.9% and 69.8% respectively, are poised to reach that threshold soon, maybe even by July 4. Meanwhile, three states — Mississippi, Louisiana, and Wyoming — have less than half of their adult populations vaccinated. Another 14 states have yet to reach 60%.

As the more transmissible Delta variant spreads quickly across the U.S. and the globe, America’s underwhelming vaccine uptake means a significant percentage of individuals remain especially vulnerable to getting severely ill from the virus. While vaccinated individuals have been among those who have gotten COVID, and in some cases, died of the virus, studies so far show that the Pfizer, Moderna, and Johnson & Johnson vaccines are all effective against the variant strain.

New COVID cases in the U.S. remain far off their peak, but the numbers have begun to creep up again.

Share of the U.S. population 18+ that has received at least one shot