The upskilling revolution will fail if women are left behind 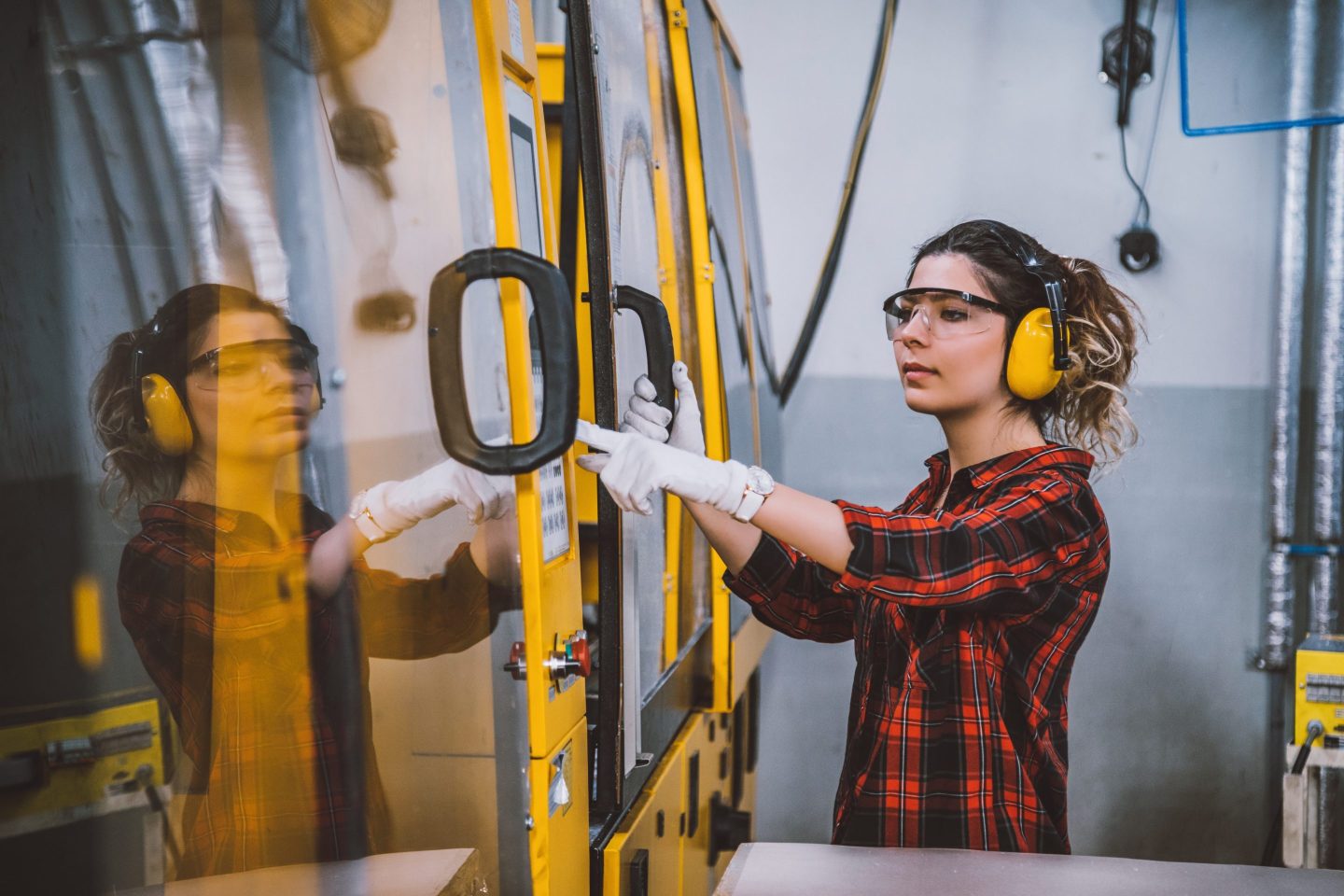 Narrative-building is one key to equitable reskilling, write Katica Roy and Christie Smith: “We need to change outdated gender norms that portray women as unfit for STEM jobs.”
Courtesy of Getty Images

Equitable upskilling is one of the sharpest arrows in our quiver that will increase the strength and velocity of our economic recovery. It sits at the nexus of Industry 4.0 acceleration, a declining population, and the she-cession. Without it, there is no “building back better.”

The key word here is “equitable.” We often talk about reskilling as a gender-neutral topic, but unless we apply the gender equity lens to initiatives to reskill our workforce, women will continue to be left behind. Our economy will suffer. After all, women make up 51% of the talent base. We need all hands on deck for our economy to flourish.

A confluence of three seismic variables further increases the urgency of equitable upskilling. The first variable is the rapid pace of digital adoption. According to research from Accenture, nearly 90% of today’s most successful companies are investing in cross-ecosystem partnerships to drive tech adoption, largely owing to the second-order effects of the pandemic.

The second variable is declining birth rates. Last year, the U.S. witnessed its slowest population growth in nine decades, according to Pew research. The third variable driving the urgency of equitable upskilling is the she-cession, which saw women’s labor force participation rate fall to 1988 levels.

The objective of equitable upskilling—bringing women back into the paid labor force and keeping them there—is economic. When women participate meaningfully in the workforce, positive things start to happen.

First, having more women in the paid workforce boosts GDP. Achieving gender parity in the labor force could boost the U.S. economy by $789 billion, by one of the authors’ estimates. And the benefits of adding more people to the workforce don’t end there. According to the IMF, closing labor force participation rates in countries with the largest gaps would expand their GDP by 35%, where one-fifth of those gains come from greater productivity via greater gender diversity among team members. That diversity dividend benefits everyone, including men, because it raises wages across the board.

Second, having more women in the paid workforce boosts household income and strengthens the middle class. In fact, women drove nearly all of the growth in U.S. middle-class household income between 1979 and 2018. And since 1988, moms have increased their contributions to family income by 7.5 percentage points, according to the Department of Labor. These wages not only expand the tax base, they also improve the livelihoods of families by making education, health care, and housing more accessible.

Third, more women in the paid workforce alleviates income inequality—an especially sensitive issue in the shadow of a K-shaped recovery. By comparing the United Nations Gender Inequality Index to income inequality, the IMF found that increased access to education and employment for women could improve income equality at unprecedented rates. The corollary of income equality, reduced levels of poverty, should be of heightened priority considering how the pandemic is expected to push 47 million more women and girls into poverty. The United Nations expects that without intervention, there will be 121 women per 100 men who live in extreme poverty (i.e., less than $2 a day) by 2030.

Fourth, having more women in the paid workforce gives us an opportunity to close the gender gap in data and artificial intelligence, where women make up only 32% of the global talent base, according to the World Economic Forum. With data from the International Data Corporation showing global spending on A.I. set to double by 2024, the window of opportunity to close the gender gap in A.I. is now. This is an upskilling issue not only from an economic standpoint, but also from an ethical standpoint to avoid egregious errors stemming from A.I. bias.

Businesses won’t want to miss out on the gains of an expanded, digitally dexterous talent pool either. Accenture found that companies with high levels of digital fluency are five times more likely to enjoy greater revenue growth over the next three years compared with less digitally fluent companies. That financial upside compounds on the gains of having a more gender equitable workforce too. Pipeline’s research across 4,161 companies in 29 countries found that companies enjoy a 1% to 2% increase in revenue for every 10% increase in gender equity.

Hardwiring equity into the reskilling revolution

Not taking action to upskill people equitably will come at a more than $11 trillion cost to the G20 countries over the next decade, says Accenture. So how can we hardwire equity in the reskilling revolution?

First, we need to collect better data. Data must be gender-disaggregated so we can track progress and deploy resources efficiently. This gender lens will provide the foundation to move forward with training and upskilling initiatives.

The second solution is narrative building. We need to change outdated gender norms that portray women as unfit for STEM jobs. Not only is this stereotype wrong—teenage girls actually outperform boys in STEM—it also dampens women’s ambitions to pursue technology-based careers. Why? Because role models matter.

In their study “Who Becomes an Inventor,” a group of five economists from Harvard, MIT, London School of Economics, and the U.S. Treasury Department concluded that childhood exposure to inventors was the biggest factor determining someone’s likelihood of becoming an inventor. What’s more, these economists found that female innovation rates would rise by 164% and the gender gap in innovation would fall by 55% if girls were exposed to female inventors at the same rate as boys are exposed to male inventors. Seeing really is believing.

Third, we need to build infrastructure to support the transition into the jobs of the future. This includes policies for affordable family care, digital skills education, pathways to employment, and expanded Internet access. Currently, less than 60% of the global population has access to tools that allow them to work or study online, according to Ilham Mansour Al-Dakheel, chair of the B20 Future of Work & Education Taskforce.

Fourth, and for the women whose jobs the pandemic has destroyed, we need to recognize the hardships of obtaining education without earning income. Public policy should support programs that provide a viable path from digital skills attainment to employment.

Fifth, we need to remove the barriers that hold women back from participating in the paid labor force. Nearly 90% of countries have at least one legal barrier (e.g., restrictions on opening a bank account) that makes it difficult for women to work outside the home. On top of these barriers, the 23% global gender pay gap further disincentives their participation in the workforce. In fact, a team of researchers from Indeed reported that slow salary growth was the third most common reason women gave for leaving their jobs in STEM.

On the heels of a pandemic that set back the labor force participation rate among U.S. women by 32 years and the gender pay gap by 22 years—draining a collective $2 trillion from the national economy—it’s time we shift our focus to not only getting women back into the paid labor force, but also keeping them there. This is about sustainable economic growth for decades to come.

Such a solution will ensure the 16 million breadwinner moms who support 28 million children (nearly a third of whom are Black) are included in the workplace of the future. It will help ensure the 15 million U.S. women and their 12 million children who currently live in poverty aren’t left behind as the labor force shifts. It will change the trajectory for the women who hold 70% of our nation’s lowest-paid jobs. Ultimately, it will change the trajectory of tomorrow’s economy.

Katica Roy is a gender economist and the CEO and founder of Pipeline, a company that leverages artificial intelligence to identify and drive economic gains through gender equity. Christie Smith is senior managing director and global lead of talent and organization/human potential at Accenture.