‘A love affair with Le Creuset’: How a staple of the French kitchen turned into a global hit 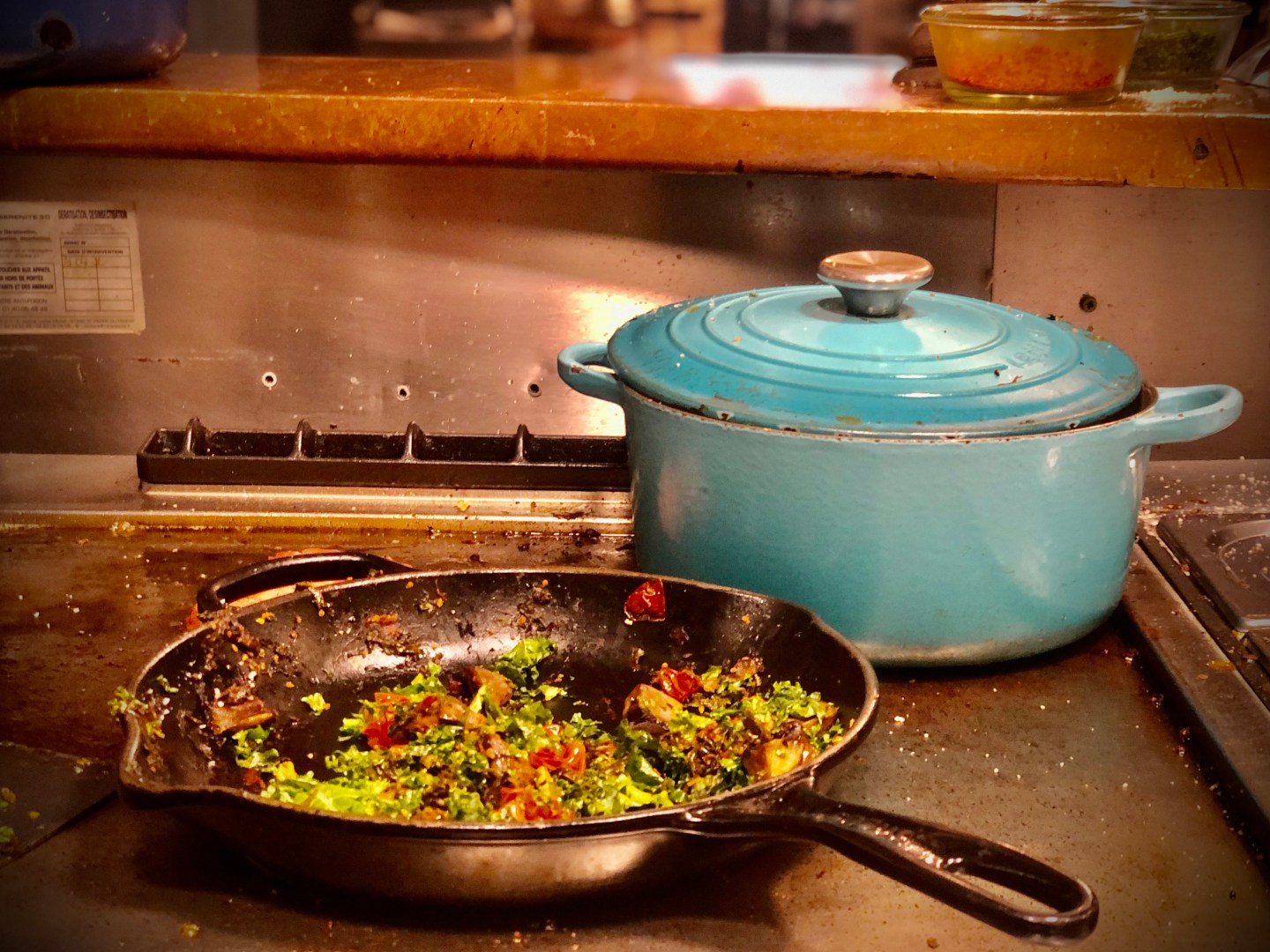 This article is part of an occasional series about iconic brands that are doing surprisingly well in these uncertain times. Previous installments looked at the buzzy comeback of Doc Martens, the global appeal of Fjällräven backpacks, and the Moka Express coffeepot, the indestructible Italian icon.

Treize au Jardin in Paris’s Latin Quarter isn’t what anyone would call a typical French restaurant. Chef and co-owner Laurel Sanderson has lived in France for more than 20 years, but she’s a South Carolinian by birth who describes her menu as cuisine of the American South fused with “inventive elements from around Europe.”

The restaurant—the name translates to “13 in the garden,” 13 as in a baker’s dozen—has a lively shaded terrace, an open kitchen, and a wall in the dining room that reads “Bienvenue Y’all.”

The menu? Think potpies and brownies rather than escargots and crème brûlée.

But if there’s one element of the place that’s as traditional as its swanky address across from Paris’s famed Luxembourg Gardens, it’s the eclectic collection of Le Creuset enamel-over-cast-iron kitchenware in various sizes and colors.

“I have had a long love affair with Le Creuset,” Sanderson told Fortune. She said her first piece of Le Creuset cookware was a used casserole dish given to her by another cook soon after she moved to France. When she needed something bigger, she bought a less expensive version made by another company.

“It wasn’t even close to the same,” she said. “The new one heated up too fast and then cooled down too fast. It didn’t hold the heat enough to allow the flavors to develop, something essential to Southern cooking. I switched back to Le Creuset and have been faithful ever since.”

Le Creuset (pronounced “Leh Crew-ZAY”) isn’t as French as it used to be. The company was acquired in 1988 by South African businessman and naturalized Brit Paul Van Zuydam, and its administrative headquarters are in Switzerland. Van Zuydam told Fortune that when he bought Le Creuset, the French market made up about half its sales; now it accounts for around 3%, thanks to growth in other markets.

But the company’s heart remains in Fresnoy-le-Grand, a town of 3,000 in France’s northeastern corner, where it was founded by two Belgians 96 years ago. In the 1920s, Fresnoy-le-Grand was at a crossroads of major shipping routes for iron, coke, and sand—essential ingredients for making cast iron. Though some of Le Creuset’s products are made elsewhere, all of its cast-iron products are still made at the original location, which has recently undergone a $215 million modernization to expand capacity and improve the sustainability of the facility, which can produce more than 25,000 pieces per day.

The Le Creuset foundry at Fresnoy-le-Grand in France, where Le Creuset cookware has been produced since 1925.
Courtesy of Le Creuset

The company’s name translates to “The Crucible,” a nod to the venerable facilities in Fresnoy-le-Grand.

Van Zuydam said keeping the production facility in France, despite the high cost of labor and 35-hour workweek, is an investment in quality. “I could save a huge amount if I did it elsewhere,” he said. “It would be half the price in Asia.”

Le Creuset’s products are not cheap. In the U.S. market, Le Creuset’s casserole dishes—they are also called French ovens, Dutch ovens, and cocottes—range from $160 to $570 depending on size. It’s no surprise the terms “sale” and “outlet” are among the most popular Internet search terms following the words “Le Creuset.” But those who use them swear by them.

“I’m not a great cook, but sometimes I feel like one when I prepare a meal with my Le Creuset cookware,” Giulia Crivelli, fashion editor at Il Sole/24 Ore, Italy’s main financial newspaper, told Fortune. She says she has around 20 of the company’s products in her kitchen.

“I think it’s like most things,” she said. “Make a high-quality product, make it simple and durable, easy to use and nice to look at, and people will buy it.”

That has been especially true during the pandemic, according to Simon Van Zuydam, the company owner’s nephew and Le Creuset’s group commercial director. The younger Van Zuydam told Fortune that even though the pandemic temporarily shuttered many of the company’s 650 shops in more than 40 countries, online sales more than made up for that deficiency.

“We’ve averaged double-digit growth over the last 15 years, but during the pandemic sales rose even more than normal,” Simon Van Zuydam said, referring to the company’s compound annual growth rate over that period. “People were cooking more at home, and looking for high-quality products for that.”

The company is proud to have avoided any pandemic-related layoffs for its global workforce of more than 4,000, a number Simon Van Zuydam said will rise to 4,500 over the next couple of years.

As a privately held company with no plans to go public, Le Creuset doesn’t make its sales figures public. But Paul Van Zuydam said global sales this year should hit a record $750 million. The company’s goal, he said, is to reach $1 billion no later than the company’s 100th birthday in 2025, through a combination of “organic growth and perhaps acquisitions.” The company carries no debt, meaning acquisitions and expansion plans are entirely self-financed.

Considering the company’s signature product has remained largely unchanged for nearly a century, Le Creuset has shown a remarkable ability to adapt.

The original Le Creuset Dutch oven is a fiery red-orange color that matches the flames of the furnaces in Fresnoy-le-Grand. But in the U.S., the company sells aptly-colored versions carrying the logos of some Major League Baseball teams. Traditional designs can come in more than 100 colors (they aren’t all available at all times), including Caribbean blue, nectar yellow, sage green, licorice black, and even glittery pink—the last a response to a direct request from the company’s representatives in Japan, one of Le Creuset’s biggest markets. The factory’s pigmentation process had to be reworked to make it happen, but it did happen in the end. Since discontinued, the pink products now sell at a premium on secondary markets.

Another area where the company is adapting is in the area of sustainability. The costly update to the Fresnoy-le-Grand plant was carried out in large part to reduce the facility’s environmental footprint, and the amount of recycled metal in the company’s cast-iron products has doubled to 70% in the past five years. The company is also looking for ways to use more renewable energy in the production process.

“Renewable energy isn’t as simple as building a wind farm next to the plant and plugging it in,” Simon Van Zuydam said. “It’s a complex situation, but we’ve resolved complex problems before, and we’ll make this work as well.”

Correction, June 7, 2021: This post has been updated to clarify that the company expects to achieve $750 million in revenues this year.