CryptocurrencyInvestingBanksReal Estate
Finance ·Inside the 500

How did Carvana make it onto the Fortune 500? Unconventional values—and car vending machines 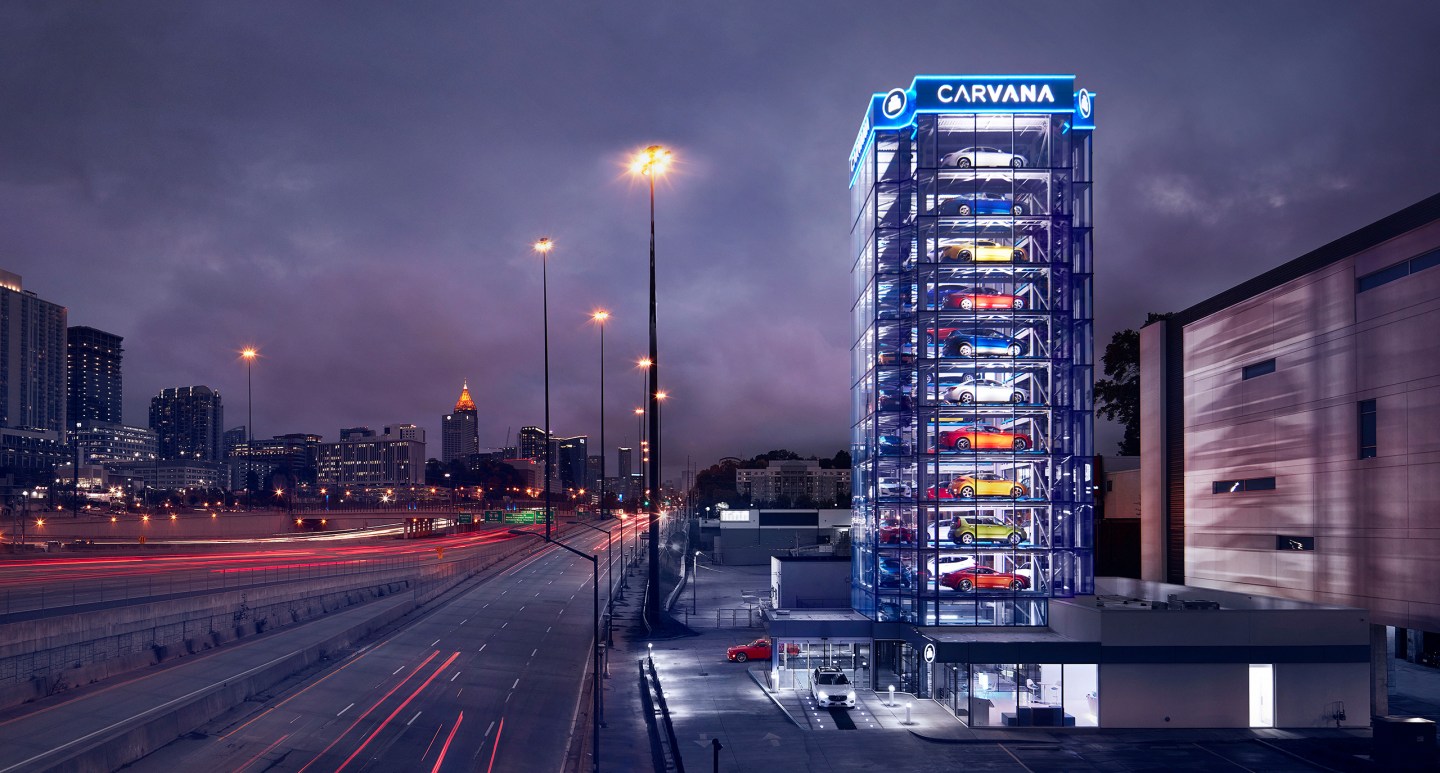 Behind every successful startup story is a tipping point anecdote. What’s the differentiator that helped you get from A to B to Z? For Carvana, the answer is simply: a Word document.

Carvana’s three founders—Ernie Garcia, Ben Huston, and Ryan Keeton—always had an operating rhythm in their friendship that seemed to serve their ambitious startup well. The trio of Ivy League grads also shared the same sense of humor and agreed from the start to work hard and have fun at the same breakneck pace. It’s clear how the few employees they had gathered early on fed off that energy, wanting to play along and work hard too.

But as the Phoenix-based company grew, and workdays no longer took place with the whole Carvana staff sitting around the same table, “that culture needed to be formalized to continue to resonate,” says CEO Garcia, who recalls typing the first loose draft of the business’s value statement, with Keeton, chief brand officer, looking over his right shoulder, and Huston, chief operating officer, over his left. “That version was a bunch of nerdy, high-minded concepts,” Garcia says. The list evolved and evolved and evolved into the document the company relies on in every hiring, firing, car sale, team meeting, strategic move, and everything in between. It’s not an overstatement to say that the Word doc turned Carvana into a $5.6 billion business that has transformed the customer car-buying experience.

Amazon first made the Fortune 500 in 2002, after just eight years in business. Google also landed on the list eight years from launch, in 2006. The third fastest company to make the list? Carvana. With more than 10,000 employees and spanning 298 U.S. markets, it’s one of the youngest companies to be listed on the Fortune 500 (tied with Facebook), and has managed an annual growth rate of 42% without a single layoff or furlough throughout the pandemic.

The technology behind the Carvana model—a used car vending machine—is pretty remarkable. Search for and vet used cars on the company site, then either have it delivered to your door or, in as little as 24 hours, collect the new-to-you car at one of 28 fully automated, coin-operated contraptions that dispense purchased vehicles on demand, completely prepped and ready for your ride home. The business is a hub-and-spoke setup with no dealerships and instead of commissioned sales reps relies on a team of customer advocates to virtually walk the customer through the deal. The concept is catchy and mediagenic, for sure. And, it turns out, the business is built on a foundation of legitimate scalability and rock-solid culture, all through the lens of glass-half-full ambition.

The idea came after two of the three Carvana founders tried their hand at a failed first startup called Looterang in 2010. Garcia and Huston met as sophomores at Stanford University. After graduation, Garcia went into finance and Huston to Harvard Law School, but the pair regularly brainstormed startup ideas. Looterang, a mobile app offering consumers personalized, local deals based off a proprietary, predictive algorithm, tanked in part because the two didn’t know enough about the industry to make it work, says Garcia. The second go had to be built in an industry he or Huston knew inside and out. Garcia grew up in and around the car business, working every summer since the age of 15 with his dad, who owned and ran a traditional and incredibly successful used car business called DriveTime. Garcia and Huston felt they had a shot. “We were trying to focus on why people left car dealerships with a stomachache,” says Garcia. “Is that solvable? We settled on something that looks a lot like e-commerce but isn’t entirely that.”

In 2012, the two joined forces with Keeton, whom they had met while building Looterang, to launch Carvana, at first as a subsidiary of DriveTime. “The automotive industry is the largest retail vertical in the country,” says Garcia. “It’s also the most recognized as an uncomfortable customer experience.”

It was clear from the outset, says Garcia, that Carvana had zero interest in test-drives and didn’t want the overhead of a traditional dealership. Still, the cofounders wanted to create an experience for the customer to pick the car up in person. The initial effort came in the form of a garage with glass doors and a keypad. It enabled the customer to get the car a day faster than by delivery and provided a fun reveal. The garage cost about $150,000 to produce and was jokingly called the car vending machine. That, of course, got some media coverage, which in turn escalated quickly to producing an actual car vending machine. After some due diligence, the founders identified an engineering firm in Germany to help them.

In November 2015, Garcia, Huston, and Keeton debuted their vending machine in Nashville. The patented project cost several million dollars and set the company up for unprecedented growth. Most traditional dealerships, says Garcia, have a sunk cost of $10 million to $20 million and sell roughly 100 to 200 cars per month. At Carvana, they sell well over 1,000 cars per month at a fraction of the investment, passing on roughly $1,400 in savings per car sale to the customer. While the company’s stock plummeted after its IPO in 2017, since then they have seen impressive growth. Analysts at IBISWorld report that Carvana holds 24% of the online used car market and project its revenue will reach over $8 million by the start of 2022.

This growth story, say the Carvana founders, is rooted in a single concept to which nearly every human can relate: Your next customer could be your mom. And that’s what Rachel Haynes, a customer advocate, was shooting for when in May 2020 she managed the sale of a BMW to one Texas husband as a Mother’s Day surprise for his wife, who had recently beat cancer. Haynes surprised the couple on delivery day, filling the back seat of the car with balloons, signs of congratulations, and a gift basket stocked with a blanket she crocheted, a bottle of Champagne, and a Starbucks gift card. No one asked her to do that; it isn’t in her job description and had no bearing on a commission check (Carvana doesn’t offer any to begin with).

“We said it from an early stage: We’ll take the best person with the best skill set every time,” says Keeton. “No expert is worth a ding to our culture.” That constant focus on culture is why, he says, anecdotes like that aren’t outliers at Carvana. Envisioning your mom on the receiving end of a sale is one of the company’s seven guiding principles. The remainder: We’re all in this together; there are no sidelines; be brave; zag forward; stay scrappy; and don’t be a Richard. (That last one is a tweaked version of, ahem, don’t be a word that rhymes with sick.)

Over time, Huston says, the list was ultimately massaged by an internal branding team. “We treated it like a campaign and spent months on it,” he says. “Most employees roll their eyes at company values. We had to consider how we hire, how we treat people, how we navigate difficult times. It has to be palatable and digestible. That’s how you cement culture that feels authentic.” Translating that Word document into a resonant campaign, and then into an authentic operating rhythm, is really where Carvana has differentiated itself, says Jonathan Keyser, CEO at Keyser commercial real estate brokerage and author of You Don’t Have to Be Ruthless to Win: The Art of Badass Selfless Service. “Intentionally designed culture is critical for long-term success,” says Keyser. “And it has to come from the top. I always say, ‘A fish rots from the head.’”

Carvana, he says, is an excellent example of how walking the talk can solve hiring and retention issues before they even arise: “If zagging forward is important, you need to look at what you’re celebrating. If someone makes a mistake and is ‘zagging,’ do you admonish them? That sends the message, ‘Play safe.’ People are looking for an organization that’s authentic. If you are clear about what you are and what you aren’t, then having a strong culture does its own vetting.”

Teresa Aragon describes herself as a Carvana OG, one of the first employees hired after the company’s launch in 2013. In her role as the VP of customer experience, Aragon supports and manages a customer-facing team of advocates. She fields all sorts of questions and spends a lot of her time solving problems. “You’re not here to join the lineup or maintain status quo,” she says, noting the zero commission pay structure on her team. “One of our values is ‘Don’t be a Richard.’ We don’t care how smart you are. If you’re a Richard, you’re not going to be here.” A conversation with Aragon about her job seems to splinter off into side stories about customer advocates making special appearances on delivery day, or receiving bags of pistachios as a thank-you for personal service, or having kumbaya moments over Zoom calls during pandemic training sessions.

At Carvana headquarters in Tempe, Ariz.
Courtesy of Carvana

If ever there was a time to test Carvana’s culture, it was over the course of the past year’s sweeping pandemic. As businesses planned for layoffs and the world slowed to a panicked halt, the Carvana cofounders turned to its values for the company’s next right step. “We are a business growing at triple-digit rates,” says Garcia. “We weren’t positioned at all to have someone turn off demand. When transactions dry up, the expenses the business can’t afford to take on are exactly the expenses making these transactions positive for our customers.”

Carvana was able to totally sidestep layoffs, but the founders quickly cut 80% of hours across all operations and committed their entire salaries to help cover the difference. They also created a fund to benefit those employees with reduced hours. More than 500 employees contributed from their salaries to raise millions, helping everyone maintain a minimum of 80% of their pay for the duration of the pandemic. “In terms of something deep and human, that’s the coolest thing we’ve ever done,” says Garcia. “That was a moment we faced fear and uncertainty to see if our values were real. Turns out they were.”

The pandemic tested the customer experience, too. With fewer people wanting to leave their homes or interact with anyone at all, the Carvana team was able to pivot and implement a program called Touchless Delivery that addressed the uptick in online car sales by opening 100 additional markets across 24 states in just one day. “In the span of a week and a half we did more work than we had in months,” says Keeton.

When asked about working at Carvana through the pandemic, Aragon doesn’t hesitate: “2020 helped us,” she says. “It is okay to have passion and show empathy for a terrible experience. We are not pushing a sale; we are creating an experience for our customers. The people and the culture here have allowed us to sustain. We protect it dearly.” Huston agrees, affirming the company’s collective optimism, even through hard work and impossible circumstances: “One of the lessons we have taken away is everything is harder and takes longer. There is no light at the end of the tunnel; you just have to get comfortable living in the tunnel and make the tunnel fun.”

And please, don’t be a Richard.