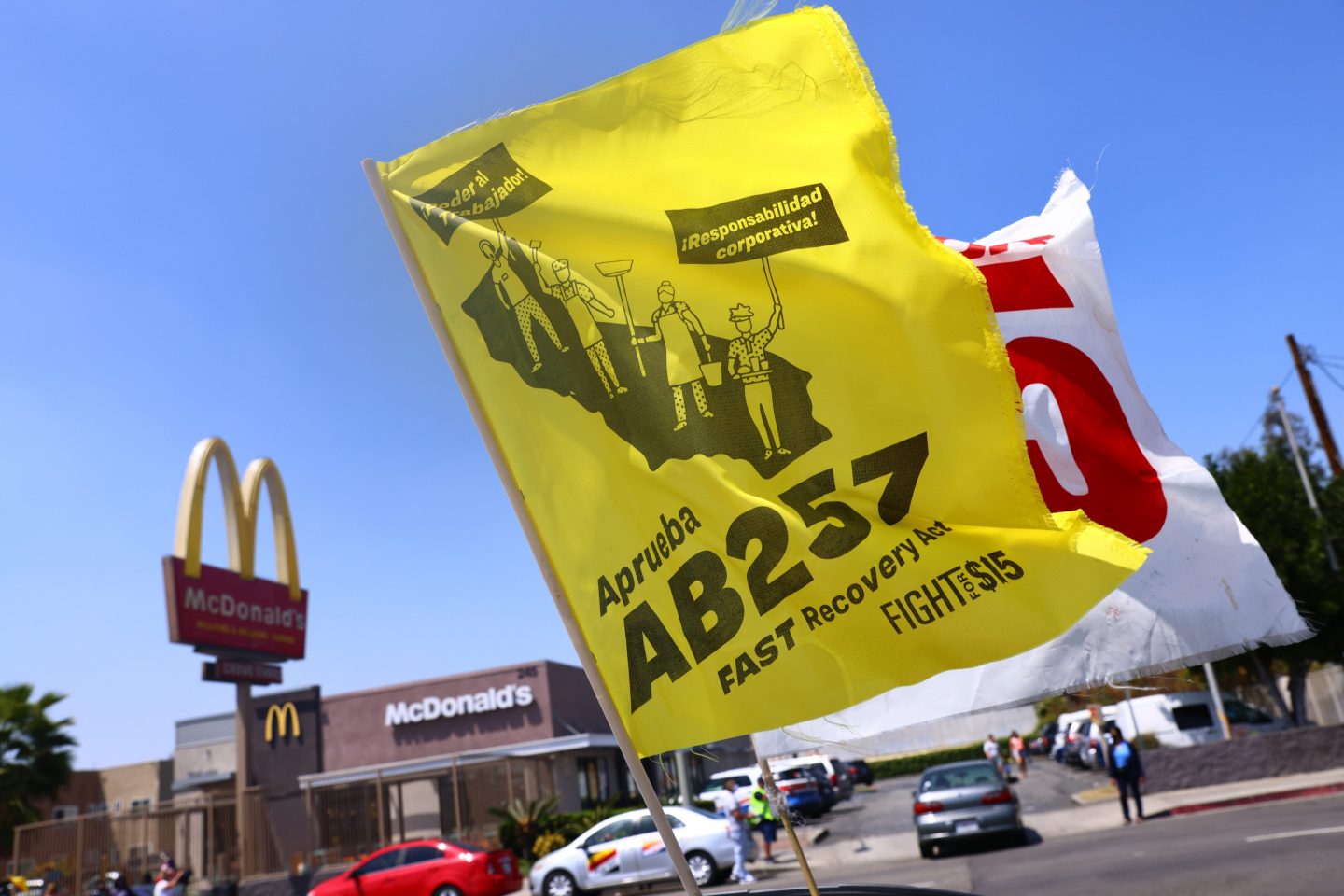 A banner advocating for California's FAST Recovery Act at a rally of fast food workers in Los Angeles in April, 2021. Elements of that bill "could form the backbone of fundamental change in the industry," writes David Madland.
Mario Tama—Getty Images

A new policy strategy emerging in California holds the potential to transform fast-food work from some of the lowest-paying jobs in the state into good jobs, with solid wages, benefits, and a voice at work. Workers, employers, and policymakers in the state and around the country should pay close attention to this model, because setting and enforcing high standards in the fast-food industry is notoriously challenging—due to the industry’s franchising model, its numerous small employers with little ability to profitably raise standards, and its largely non-union workforce.

Fast food workers earn some of the lowest wages in California—$13.27 an hour, according to the Bureau of Labor Statistics—with only farm workers earning less in the state. Benefits are also meager: Researchers have estimated that just 13% of fast-food workers receive health benefits through their employer. A 2021 study found that more than two-thirds of the families of fast-food workers in California were enrolled in at least one public-safety net program, such as the Supplemental Nutrition Assistance Program (SNAP) or Medicaid, at a public cost of $4 billion a year.

Compounding these problems is that nearly 9 in 10 fast food-workers, say they are subject to illegal working conditions—refused overtime pay, forced to do off-the-clock work, denied breaks, or placed in unsafe situations.

At the heart of the strategy to improve conditions for fast food workers in California is a “sectoral council,” which would bring together representatives of workers, employers, and public-sector regulators to make recommendations regarding minimum compensation, safety, scheduling stability, and training standards for the industry.  A hearing on the FAST Recovery Act—a bill that would establish the sectoral council—was held on April 22, and some think the bill could pass this year.

Sectoral councils and similar bodies have succeeded in helping raise working standards in a number of industries and regions. The state of New York used a wage board to bring together representatives of workers, employers, and the public to raise wages for fast-food workers;  the city of Seattle Domestic Workers Standards Board provides a forum for domestic workers, employers, private households, worker organizations, and the public to improve conditions for that sector; and a number of countries, including Australia and Britain, have used similar bodies in labor relations.

A fast-food sectoral council could form the backbone of fundamental change in the industry: It could not only raise standards for workers but also provide a way for workers as well employers—both franchisees and franchisors—to have a strong voice on the standards in their industry, while helping ensure standards are actually implemented and complied with.  These features are critical, because the structure of the fast-food industry makes it difficult to improve working conditions with traditional measures that have succeeded in other industries, such as actions by high-road employers that want to provide good compensation, the push of collective bargaining, or stand-alone legislated standards.

A handful of large, profitable franchisors dominate the fast-food industry, but most of the firms that actually run fast-food restaurants and employ fast-food workers are smaller franchisees with low profit margins. These employers have little ability to improve compensation on their own, and the payments they owe to their franchisors restrict their economic flexibility. As law professor Catherine Fisk has argued, “A franchisee who believes employees should be paid more cannot make a profit under the [franchise] formula if he raises wages, and he will lose his franchise if he cannot make the payments required under the agreement.”

Collective bargaining also faces steep challenges in the industry.  Inadequate federal labor laws, which states cannot legally change, fail to guarantee workers basic rights and make joining a union unnecessarily difficult—and nearly impossible in an industry like fast food with very high worker turnover and thousands of franchisees. Not surprisingly, just one percent of workers at food service and drinking places overall are members of unions (and within fast food, union density is likely even lower).

Raising the minimum wage and other standards for all workers through legislation could help. But such legislation misses an opportunity to create a forum for workers and employers to discuss inter-related fast-food industry issues. It also fails to sufficiently involve workers in the process of setting and enforcing standards. And engaged and organized workers are critical to effectively policing minimum standards and ensuring workers can come forward and assert their rights.

As I highlight in my new book Re-Union: How Bold Labor Reforms Can Repair, Revitalize, and Reunite the United States, sectoral councils are well suited to addressing these challenges. They can raise standards for all workers no matter whether they are directly employed by a lead firm or a franchisee; they can enable employers to compete on a level playing field; they can provide a forum for franchisees and franchisors to influence standards; and they can help build the worker engagement necessary to promote high standards and ensure they are complied with.

By moving ahead with this model of stakeholder involvement and standard-setting in the fast-food industry, California may be showing the way forward for other states and the country.

David Madland is the author of Re-Union: How Bold Labor Reforms Can Repair, Revitalize, and Reunite the United States and is a senior fellow at the Center for American Progress.