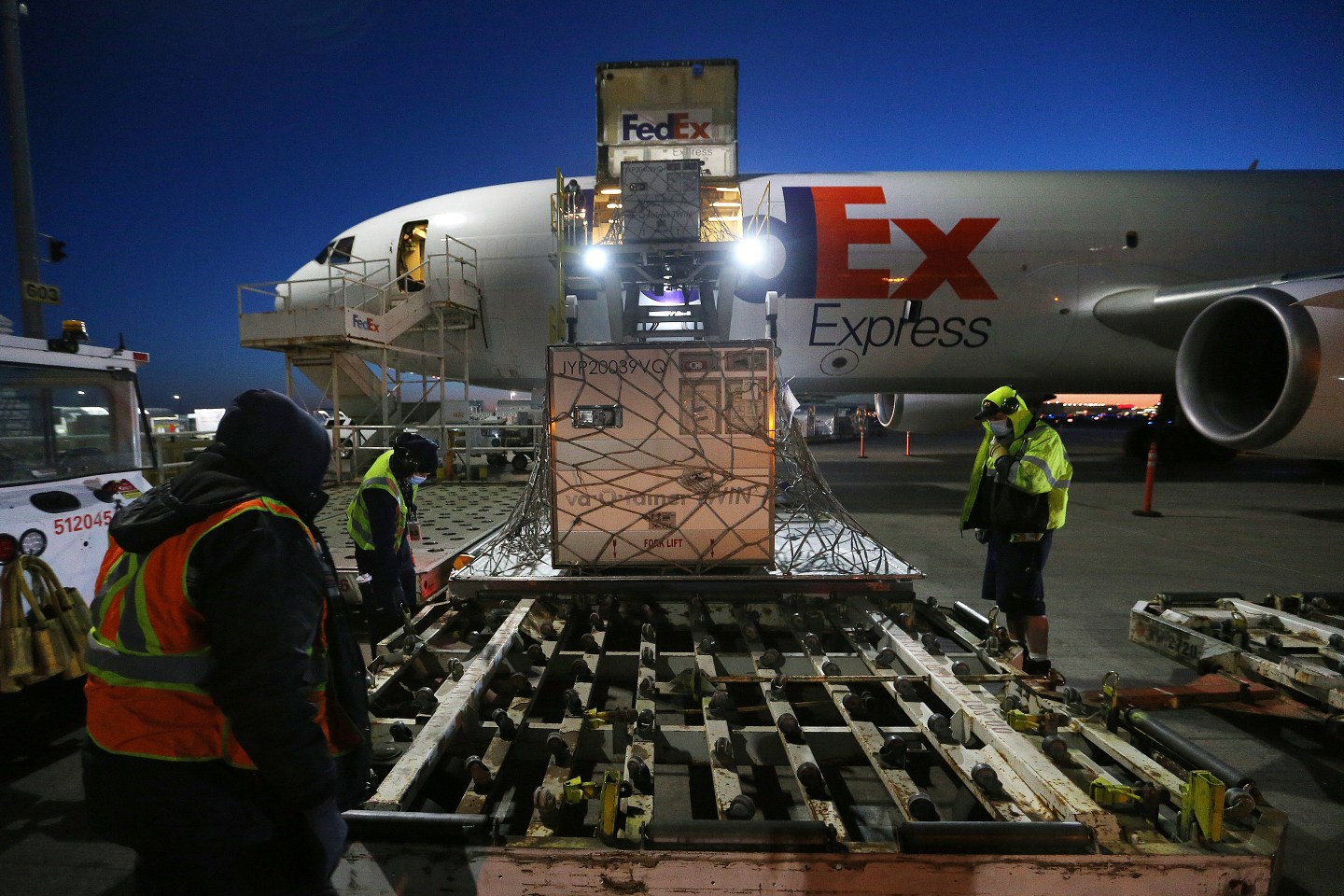 Containers of COVID-19 vaccines are unloaded from a FedEx plane in Toronto on April 2, 2021.
Steve Russell—Toronto Star/Getty Images

The Wright brothers challenged the limits of the possible by defeating gravity with their three-axis flight control system. In the same way, we must also challenge what’s possible by confronting climate change with innovative thinking. Business and science must work together on solutions to reduce net greenhouse gas emissions and capture carbon from the atmosphere.

Global air services now comprise an industry with nearly 88 million jobs, and in 2019, airplanes transported over 4.5 billion passengers around the world.

Airplanes enable humanity’s innate historical desire to travel and trade, and they create a more connected, prosperous world. But these great benefits made possible by companies like FedEx aren’t without an impact on the environment, and we must address those effects through improved sustainability and efforts to decrease net greenhouse gas emissions.

FedEx is a global company with more than 680 aircraft, and the goal to achieve carbon-neutral global operations by 2040 is a significant endeavor with far-reaching impacts for the planet, given the size of its fleet. FedEx has been focused on more sustainable aviation solutions for decades, including investing in aircraft modernization, as well as reducing fuel consumption. In fact, since 2012, the company’s fuel conservation and aircraft modernization programs have saved a combined 1.43 billion gallons of jet fuel and avoided over 13.5 million metric tons of carbon dioxide emissions.

But unlike other transport activities that can be powered by batteries or other low-carbon fuels, achieving true sustainability in aviation has proved to be an intractable problem since there are few viable alternatives to carbon-based jet fuels on the horizon.

Along with investing in the modernization of aircraft, the aviation industry will continue research and development of sustainable plant- and waste-based biofuels, synthetic carbon-based fuels, electrofuels (a promising alternative energy source that involves feeding microorganisms carbon dioxide and stimulating them with electricity), and green hydrogen (a potential fuel source produced using renewable energy and electrolysis to split water).

However, the massive costs of new sustainable aircraft fuels, suitable new aircraft designs to use them, and associated infrastructure make the prospects for carbon-neutral aviation challenging.

Developing a portfolio of natural solutions for carbon sequestration is an ambitious but realistic approach to this problem—one that can have an immense effect on our ability to reduce atmospheric carbon dioxide. Nature demonstrates every day how carbon capture is one of our best options to mitigate humanity’s negative effects on the environment.

Business and science must pursue strategies that combine both rapid and long-term, large-scale approaches. For example, boosting the amount of carbon that can be stored in Earth’s ecosystems—through reforestation of formerly forested lands, more efficient photosynthesis, and the integration of regenerative agriculture practices—can provide large and immediate increases in carbon sequestration. In fact, increased forest ecosystem carbon storage currently represents the only relatively well-known process that can occur at scale.

Geological carbon capture strategies have the advantage of being effectively permanent. Through mineral weathering, carbon dioxide dissolved in water reacts with minerals on the Earth’s surface to produce carbonate minerals, which make up rocks such as limestone and marble. Rocks and minerals, which cover more than two-thirds of the Earth’s surface, do not decay as plants do, and they represent a nearly inexhaustible, long-lasting sink for carbon if we can understand how to tap them efficiently.

Carbon dioxide is one of the greatest wastes of our age, but through advances in green chemistry, green engineering, and industrial ecology, it also provides one of our greatest opportunities. Using nature as a model, we should research potential uses for carbon dioxide as a raw material to produce fuels, plastics, and building materials.

Initial efforts to address aviation emissions must expand in scope to find solutions for efficient sequestration of even more carbon, and the advantages of this work will reach far beyond Yale’s campus and FedEx’s fleet. Businesses, industries, and governments around the world all stand to benefit from scientific learnings that can accelerate the adoption of new natural carbon capture strategies.

FedEx and Yale have unique respective roles in global commerce and academic research, and the added responsibility of being diligent stewards of our planet. We share that responsibility with peers in global aviation and across the scientific community and hope that our colleagues in all fields will join in this type of science-and-solutions research and the pursuit of carbon neutrality in their own sectors and spheres of influence.

There is, of course, a growing chorus of businesses making new sustainability commitments—and reaping reputational benefits as a result. But corporations must go beyond virtue signaling and invest in pragmatic solutions.

Before his first successful flight 118 years ago, Wilbur Wright said, “It is possible to fly without motors, but not without knowledge and skill.” And that is exactly what will be required to preserve our planet for future generations—our collective knowledge and skill.

Ingrid C. “Indy” Burke is the Carl W. Knobloch Jr. dean of the Yale School of the Environment.

Frederick W. Smith is chairman and CEO of FedEx.