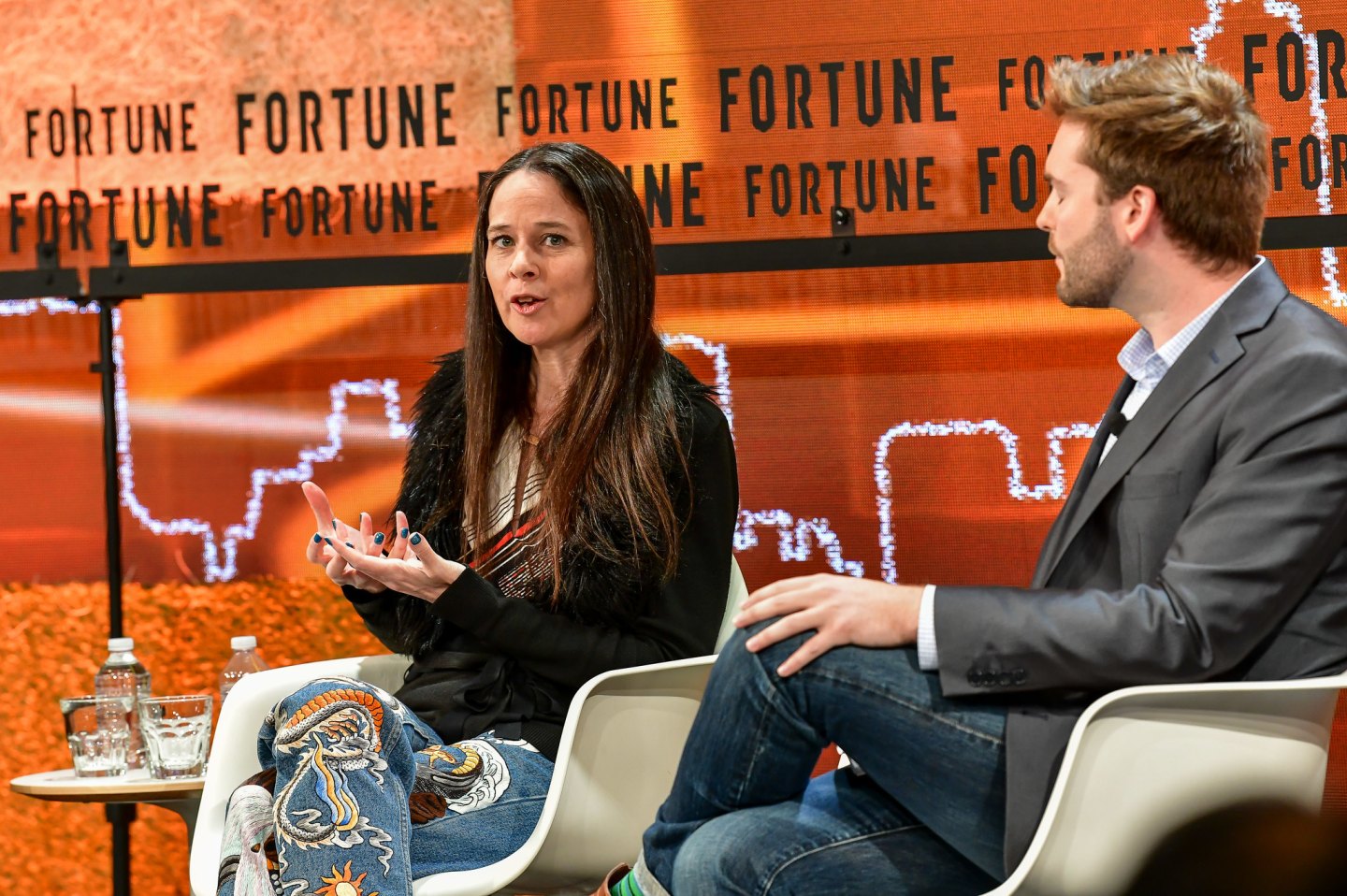 The Biden administration has nominated Jen Easterly, a Morgan Stanley cybersecurity exec, as Homeland Security's next Cybersecurity Infrastructure and Security director. Here she is seen speaking at the 2018 Fortune Brainstorm Tech conference in Aspen, Colo.
Fortune

What a difference a couple weeks makes.

At the end of last month, Data Sheet lamented the Biden Administration’s lack of progress on filling top government cybersecurity roles, including naming the U.S.’s first-ever National Cyber Director. On Monday, the White House selected its nominees—and they are top-notch picks.

The first name to know is John “Chris” Inglis, a former deputy director at the National Security Agency. He is proposed as the National Cyber Director, an appointment first reported by the Washington Post. The position is a new one, created by Congress last year to oversee federal agencies’ cybersecurity budgets and coordinate defenses. His recent experience on the board of FedEx, which lost hundreds of millions of dollars to a 2017 cyberattack, will prove crucial as the nation attempts to bounce back from a wide-ranging, suspected Russian cyberespionage operation known as SolarWinds.

Next to Inglis is Jen Easterly, a former NSA official who advised the Biden transition team on cyber policy and who was rumored as a contender for the new directorship. She is slated to head the Department of Homeland Security’s Cybersecurity Infrastructure and Security Agency (CISA), taking over a seat vacated by founding director Chris Krebs. Easterly’s recent tenure as head of resilience at Wall Street bank Morgan Stanley will prove indispensable as she coordinates cyber defenses between the private and public sector.

Finally, Rob Silvers, a former assistant secretary for cybersecurity policy in the Obama administration, got nominated as Homeland Security’s undersecretary for strategy, policy, and plans. People earlier suspected he might become CISA’s next leader.

The nominees are all regarded as extremely well qualified, and they are expected to glide through the Senate confirmation process in the weeks to come. Assuming they get the nods, they’ll be welcome reinforcements for Anne Neuberger, Biden’s deputy national security advisor, who has been shouldering the brunt of the cybersecurity burden, a big responsibility in the wake of the SolarWinds hack and a worrisome spree of breaches involving Microsoft Exchange.

The pending triumvirate is already winning endorsements from experts. Krebs, the former CISA director, called the three choices “brilliant picks,” adding, “My goodness. This is a team.” Dmitri Alperovitch, a cofounder of the cybersecurity firm CrowdStrike who has since started a security-focused think tank called the Silverado Policy Accelerator, similarly praised the appointments. “This is the cyber equivalent of the Dream Team!,” he tweeted.

Nvidia killed the radio star. Chipmaking giant Nvidia's annual GTC 2021 event kicked off on Monday. (The acronym stands for GPU Technology Conference, a reference to the A.I.-friendly "graphics processing unit" chips that are the company's speciality.) The firm released a whole bevy of product announcements, the most notable of which were plans to enter the data center market by offering server microprocessors, a segment that is rival Intel's major profit engine. Nvidia shares rose 7% on the news, alongside projections that it will beat revenue expectations for the first quarter.

Intel inside. Nvidia's "good news" hurt the competition: Intel shares dropped 4%. Data Sheet's Aaron Pressman caught up with Intel's very new CEO Pat Gelsinger afterward. He maintains that Intel is "on the offense, not the defense." Gelsinger had just finished convening with a collection of tech and auto CEOs at a meeting arranged by the White House. They discussed the industry-wide computer chip shortage and President Biden's plans to invest trillions in domestic infrastructure.

Come sale away. Salesforce is reopening Salesforce Tower, the software-slinger's headquarters and namesake skyscraper, to a subset of fully vaccinated employees in May—but they'll have to agree to twice weekly COVID-19 testing. Staffers can still work from home through 2021, the company said in a blog post. Salesforce is San Francisco's biggest employer, so the phased reopening plan is a big deal for the city.

I bless the rains down in Africa. While San Francisco slowly picks up, Twitter is setting up its first office in Africa. CEO and founder Jack Dorsey chose Ghana to be the team's home base, calling the country "a champion for democracy...a supporter of free speech, online freedom, and the Open Internet." Pre-pandemic, Dorsey floated the idea that he would move to Africa for six months out of the year. East African charities are a favorite of his philanthropic largess.

Making anthills out of mountains. Months after the sidelining of its planned IPO, Chinese fintech giant Ant Financial has agreed to a sweeping "rectification plan" put forward by Beijing regulators. The Alibaba sibling said it will apply to become a financial holding company, which has implications for its business model, limiting its ability to make money by lending money, for instance. The company said in a statement that it would "return to its payment origins."

Veering into the void. Facebook's Oculus VR headset division is hosting a gaming showcase on Wednesday, April 21. The event will be streamed on Twitch, YouTube, and, yes, Facebook starting at 6 p.m. ET that day. Apple's voice assistant Siri also spilled the beans on the date—Tuesday, April 20—of the next Apple event, MacRumors discovered. Pencil it in.

The debutante ball. Bitcoin hit an all-time high this morning, surpassing $63,000, ahead of cryptocurrency exchange Coinbase's direct listing on Wednesday. Southeast Asian "superapp" Grab is going public through a $40 billion SPAC merger. And UK cybersecurity firm Darktrace is planning an imminent IPO on the London Stock Exchange that could value the company at more than $4 billion.

A former Facebook data scientist, Sophie Zhang, is blowing the whistle on a loophole world leaders are exploiting to game the social network's systems. She calls the technique "page abuse," and she says politicians hailing everywhere from Azerbaijan to the Philippines are exploiting it to rack up fake engagement on posts. "The loophole has remained open due to a lack of enforcement," warns the Guardian, which published an investigation on the subject on Monday.

The most blatant example was Juan Orlando Hernández, the president of Honduras, who in August 2018 was receiving 90% of all the known civic fake engagement in the small Central American country. In August 2018, Zhang uncovered evidence that Hernández’s staff was directly involved in the campaign to boost content on his page with hundreds of thousands of fake likes.

One of the administrators of Hernández’s official Facebook Page was also administering hundreds of other Pages that had been set up to resemble user profiles. The staffer used the dummy Pages to deliver fake likes to Hernández’s posts, the digital equivalent of bussing in a fake crowd for a speech.

This method of acquiring fake engagement, which Zhang calls “Page abuse”, was made possible by a loophole in Facebook’s policies. The company requires user accounts to be authentic and bars users from having more than one, but it has no comparable rules for Pages, which can perform many of the same engagements that accounts can, including liking, sharing and commenting.

Intel CEO on Nvidia competition: 'We are playing offense, not defense' by Aaron Pressman

Spring is in the air: U.K. IPOs pick up, companies predict recovery, and shoppers return by Sophie Mellor

April Fool's Day passed, but that's not stopping the New York Stock Exchange from giving us all a good laugh. The bourse is hopping on the cryptocurrency bandwagon by minting non-fungible tokens, or NFTs. The set of collectibles are set to commemorate the public market debuts of six companies, all tech firms: Spotify, Snowflake, Unity, DoorDash, Roblox and Coupang.

That's right: Instead of owning and investing in income-generating stocks, now you too can own...speculative and questionable blockchain-thingies? I mean, to NYSE's credit, NFTs are basically free money. So why not?