11 new books to read in March 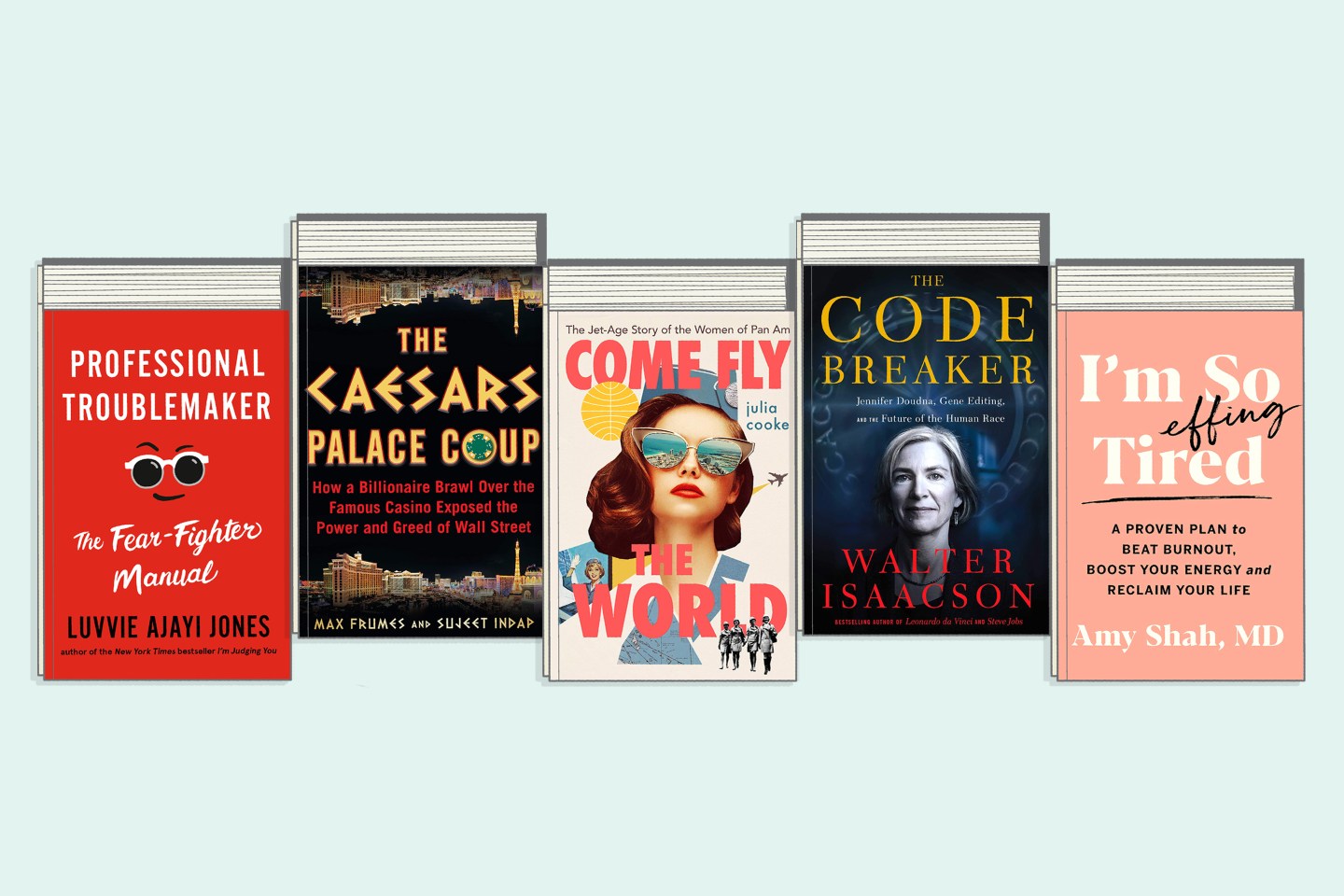 A selection of fiction and nonfiction slated for March and worthy of your consideration.
Courtesy of Penguin Life; Diversion Books; Simon & Schuster; Houghton Mifflin

A new guide to beating burnout; the next celebrity memoir certain to hit bestseller lists; and the story of one of the most brutal corporate restructurings in Wall Street history, contested from the Vegas Strip to Manhattan boardrooms.

Here are 11 new books coming out in March.

“Come Fly the World: The Jet-Age Story of the Women of Pan Am,” by Julia Cooke
Courtesy of Houghton Mifflin

Come Fly the World: The Jet-Age Story of the Women of Pan Am by Julia Cooke

Here’s the chance to travel—in time and in the sky—vicariously. Requiring a college education, fluency in two languages, and the political savvy of a foreign service officer, a jet-age stewardess serving on Pan Am between 1966 and 1975 also had to be between five-three and five-nine, between 105 and 140 pounds, and under 26 years of age at the time of hire. Julia Cooke’s intimate storytelling weaves together the real-life tales of a memorable cast of Pan Am flight attendants—several of whom are still alive today—as they embraced the liberation of their new jet-set life. The nonfiction work also unearths little-known stories about how Pan Am flight attendants went above and beyond, including their role in the Vietnam War, as the airline added runs from Saigon to Hong Kong for planeloads of soldiers straight from the battlefields, who were off for five days of R&R, and then flown back to war.

“I’m So Effing Tired: A Proven Plan to Beat Burnout, Boost Your Energy, and Reclaim Your Life,” by Amy Shah, MD
Courtesy of Houghton Mifflin

I’m So Effing Tired: A Proven Plan to Beat Burnout, Boost Your Energy, and Reclaim Your Life by Amy Shah, MD

These days, it seems there is no shortage of think pieces about burnout. (Until we are burned out from that topic, too.) Dr. Amy Shah offers a more precise approach. In this guide to conquering burnout and increasing your energy from a leading medical doctor and nutrition expert, Shah outlines a detailed schedule (lasting several weeks) that gets you back on track by targeting the complex relationship between your gut, your immune system, and your hormones.

“Klara and the Sun,” by Kazuo Ishiguro
Courtesy of Knopf Publishing Group

Klara and the Sun by Kazuo Ishiguro

The first novel by Kazuo Ishiguro since he was awarded the Nobel Prize in Literature in 2017, the story is set around Klara, an “artificial friend” with outstanding observational qualities, who, from her place in a store, watches the behavior of those who come in to browse, and of those who pass on the street outside—in hopes that a customer will choose her. The retail setting serves as an allegory for a fundamental question: What does it mean to be human?

“The Noble Rot Book: Wine From Another Galaxy,” by Dan Keeling and Mark Andrew
Courtesy of Quadrille Publishing

The Noble Rot Book: Wine From Another Galaxy by Dan Keeling and Mark Andrew

Written by the founders of London’s buzzy Noble Rot restaurant and the magazine of the same name, Wine From Another Galaxy is a gorgeous coffee-table book that is secretly an in-depth textbook on European wine culture. Readers are taken on a journey to meet the people and places behind the authors’ favorite bottles, with an emphasis on small-production artisanal winemakers and emerging destinations such as Tenerife, Santorini, and Mount Etna. Favorite home-cook–friendly recipes for pairing with wine are also included, as well as a rundown on label art.

Despite being a published author and podcast host, Luvvie Ajayi Jones found she was afraid to call herself a writer because she feared the title. And she nearly skipped out on giving a TED Talk that changed her life because of impostor syndrome. But she’s not alone. Ajayi Jones examines what we must get right within ourselves before we can do the things that scare us; how to use our voice for a greater good; and how to put movement into the voice we’ve been silencing—because truth-telling is a muscle. The point is not to be fearless; it is to recognize the things we must do are more significant than the things we are afraid to do.

“The Code Breaker: Jennifer Doudna, Gene Editing, and the Future of the Human Race,” by Walter Isaacson
Courtesy of Simon & Schuster

The Code Breaker: Jennifer Doudna, Gene Editing, and the Future of the Human Race by Walter Isaacson

Walter Isaacson—the bestselling author of biographies on Leonardo da Vinci, Albert Einstein, and Steve Jobs—is back. This time the genius at the center of it all is American biochemist and Nobel Prize winner Jennifer Doudna, one of the prime inventors of Crispr, a system that can edit DNA. (Crispr has been used in China to create “designer babies” that are immune from the AIDS virus, and in the U.S. to cure patients of sickle cell anemia.) Doudna is also a pioneer in discovering the structure of RNA, the molecule that powers Crispr and COVID-19 vaccines.

“Unbound: A Woman’s Guide to Power,” by Kasia Urbaniak
Courtesy of TarcherPerigee

Unbound: A Woman’s Guide to Power by Kasia Urbaniak

How can so many women feel good and mad yet still reluctant to speak up in a meeting or difficult conversation? Why do women often feel like they’re too much—and, at the same time, not enough? What causes us, at the most critical moments in our lives, to freeze? In Unbound, Kasia Urbaniak teaches power to women—and her answers to these questions may surprise you. Based on insights from her experience as a dominatrix, her training to become a Taoist nun, and the countless women she has taught to expand their influence, this book offers precise, practical instruction in how to stand in your power, find your voice, and use it well.

“The Hospital: Life, Death, and Dollars in a Small American Town,” by Brian Alexander
Courtesy of St. Martin’s Press

The Hospital: Life, Death, and Dollars in a Small American Town by Brian Alexander

By following the struggle for survival of one small-town hospital, and the patients who walk, or are carried, through its doors, The Hospital takes readers into the world of the American medical industry in a way no book has done before. Americans are dying sooner and living in poorer health. Brian Alexander argues that no plan will solve America’s health crisis until the deeper causes of that crisis are addressed. Culminating in COVID-19, this book details how we’ve created the dilemma we’re in.

“Futureproof: 9 Rules for Humans in the Age of Automation,” by Kevin Roose
Courtesy of Random House

Futureproof: 9 Rules for Humans in the Age of Automation by Kevin Roose

A.I. and automation have certainly garnered a lot of attention and headlines in the tech press over the past decade, especially as the technology has improved exponentially in recent years. But with the current economic crisis unfolding, business leaders across all industries are going to be rethinking which jobs can be automated. In Futureproof—originally scheduled to be released in 2020 but one of the many books pushed to 2021—New York Times technology columnist Kevin Roose suggests these machines aren’t actually threatening jobs, and with the right planning and organization, “futureproofing” your company for technological change could set up better protections for jobs down the road.

“The Caesars Palace Coup: How a Billionaire Brawl Over the Famous Casino Exposed the Power and Greed of Wall Street,” by Max Frumes and Sujeet Indap
Courtesy of Diversion Books

The Caesars Palace Coup: How a Billionaire Brawl Over the Famous Casino Exposed the Power and Greed of Wall Street by Max Frumes and Sujeet Indap

Financial journalists Max Frumes and Sujeet Indap serve up an investigative deep-dive into an old-fashioned casino heist, which includes a $31 billion leveraged buyout and a string of financial engineering transactions by Apollo Global Management and TPG Capital—all in the midst of the post–Great Recession slump, pitting private equity firms and distressed-debt hedge funds against each other in an ultimate poker match.

“The Beauty of Living Twice,” by Sharon Stone
Courtesy of Knopf Publishing Group

The Beauty of Living Twice by Sharon Stone

The past few years have seen a string of revelatory celebrity memoirs that aren’t just promotional tools but genuine, no-holds-barred autobiographies offering nuanced looks at people we might have thought we knew. Among the most popular bestsellers last year were titles from Demi Moore and Jessica Simpson. This year, Sharon Stone shares her story: The actress recounts how she rebuilt her life in the wake of a massive stroke and pursued a slow road back to wholeness and health.