Can Peloton outpace the pandemic? 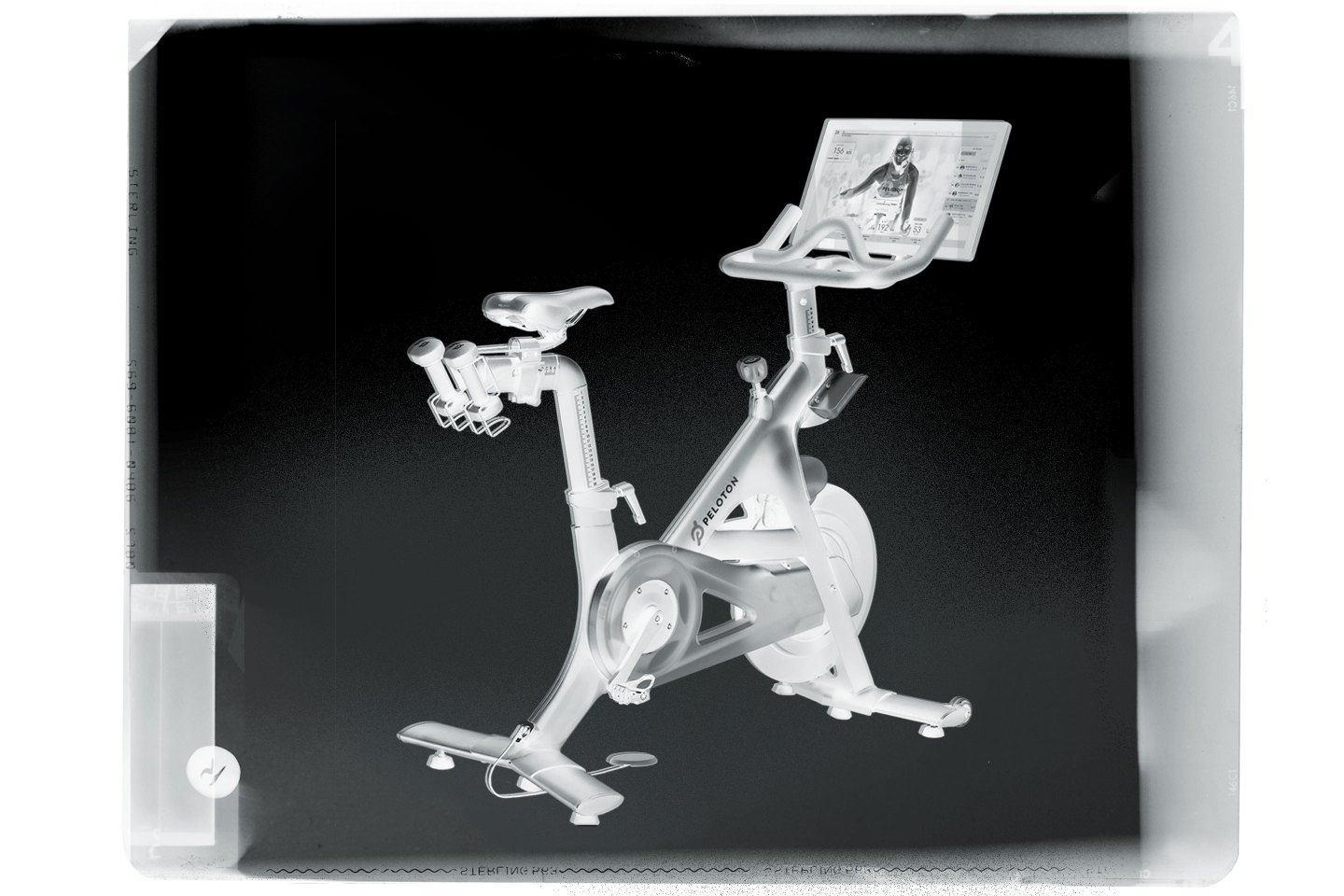 A few days after pro-Trump rioters storm Congress, I mount my trial Peloton bike to let off steam.

Curious about the company’s handling of the chaos, I select a 30-minute “high-intensity interval training and hill ride” recorded on Jan. 6, while law enforcement cleared the Capitol. I clamp on my clip-in shoes and join the cycling session’s Adonic trainer, Cody Rigsby, who appears on an attached tablet screen.

“What we’re gonna do is use movement and sweat and resilience and tenacity to get us through and process all of that emotion, okay?” Rigsby sermonizes, legs whirring in sync with an electro-house jam.

Sweat drips. Endorphins course. As I pedal harder, Peloton—a business I long dismissed from the sidelines as a frivolous luxury—begins to make sense. Something is bubbling up within me—a frisson. It’s the feeling that John Foley, Peloton’s cofounder and chief executive, refers to when he tells me he wants his exercise equipment and classes “to feel like a warm hug.”

Perhaps no one is feeling more snuggled than Peloton and its investors right now. During the COVID lockdowns that began last year, the connected-bike maker quickly became one of the pandemic’s biggest winners. Millions of suddenly gym-less people scrambled to satisfy their fitness fixes with Peloton’s at-home gear and workout app. In response, the company’s shares have soared. Since going public in September 2019, Peloton’s stock price has sextupled to $147.17.

But Peloton is about to face its most challenging incline yet. With more people getting vaccinated, more gyms are poised to reopen, which could temper the home workout craze. Meanwhile, drafting off Peloton’s lead, a host of competitors, from Apple to NordicTrack-maker Icon Health & Fitness, are muscling into the market. It’s a pivotal moment for Peloton to prove it’s got momentum, that it can be more than just a stay-at-home fad.

In 2014, a couple of years after Peloton’s founding, Foley and Tom Cortese, Peloton’s cofounder and chief operating officer, set up shop in a mall in Short Hills, N.J. Situated near an Apple store and a Tesla dealership, the two hoped to tap those brands’ high-end allure while enticing passersby.

The Tesla connection would prove prescient. Both companies started with pricey, premium hardware and an ambition to reach mainstream customers. The fortunes of both businesses soared during the pandemic as poster children of a tech rally reminiscent of the dotcom craze.

The math of Peloton’s valuation—it has a market capitalization of $46 billion—is difficult to justify unless one believes the company will become a tech-media titan. Jay Hoag, a venture capitalist with TCV who joined Peloton’s board after leading a funding round in 2018, should know. An early investor and longtime director of Netflix, he compares Foley’s ambitions to those of Netflix CEO Reed Hastings. Many peers wrote off these founders as “crazy,” but Hoag believed in their vision, feeling “there was something magical about all of it,” he says.

Not everyone is enchanted. Simeon Siegel, an analyst at BMO Capital Markets, is Peloton’s iciest bear. “Humanity, by nature, is lazy,” he says. Siegel argues that Peloton’s market opportunity is limited: Most people prefer to plant butts on couches than glutes in saddles. Merciless in his appraisal, Siegel says Peloton’s stock is “detached from reality” and should trade at $33, or nearly 80% lower than where it is today.

Whichever the case, Peloton’s business is growing quickly. The company saw $1.8 billion in sales during its fiscal year ended June 30, 2020, doubling from the year before. Most of that money came from selling bikes, which cost up to $2,500. But the company is also focused on adding to its 1.8 million digital subscribers, who pay up to $39 monthly for virtual classes.

For most of its history, Peloton has hemorrhaged money. During the pandemic, however, with the influx of new customers, it finally switched gears into profitability—nearly $160 million in the past two quarters combined.

Still, Peloton has found itself on the defensive lately. During the madness of the pandemic, a spike in customers inconveniently coincided with a crippled supply chain. Quarantined ships, jammed-up terminals, and closed warehouses stalled the import and distribution of Peloton’s bikes and treadmills from Taiwan, its main manufacturing base. Customers, strung along and disappointed by continual delivery delays, vented on social media.

Foley ultimately apologized for the problem and promised to do better. The company expects to clear its backlog by spring.

While Peloton whips itself into shape, competitors are angling to steal the lead by doubling down on workout tech of their own. In April, 45-year-old Icon started offering Planet Fitness’s then 15 million members access to iFit, its catalog of streamed fitness classes. In June, clothing retailer Lululemon paid a half-billion dollars for Mirror, the maker of a smart screen for workouts. And in December, Apple debuted Fitness+, a subscription service for online exercise classes.

Meanwhile, Nike, Under Armour, and Strava are revving up their own fitness apps.

Will any of these, including Peloton, have staying power after the virus subsides? “It has long been our thesis that fitness is moving to the home,” says Jill Woodworth, Peloton’s chief financial officer. “We don’t think that’s going to abate when COVID is over.”

It has long been our thesis that fitness is moving to the home.

Foley puts it another way: “We sell people effectively a Trojan horse.” He means that buyers of Peloton’s equipment get hooked on subscribing to Peloton’s classes, and are therefore unlikely to defect to rivals.

Peloton is extending its hooks too. In December it shelled out $420 million for Precor, a maker of exercise equipment for hotels and gyms. That business will enable Peloton to follow its devotees on business trips and vacations. Crucially, the acquisition also expands Peloton’s manufacturing footprint beyond Asia to the U.S., alleviating some logistical challenges.

On a mid-January day, I tour a new Peloton R&D facility that opened as the pandemic struck. Here, Peloton tries to improve its products and dream up new types of torture racks for its customers.

At one point, cofounder Cortese lets me peek inside a room that contains equipment undergoing testing. Near the doorway, a bicycle hooked up to a computer is pedaling away with no one in the seat, as though a ghost is riding it. On the other side of the room, I glimpse something I doubt I’m supposed to see. It’s a long-rumored follow-up piece of equipment that the company has never officially confirmed: a rowing machine.

When I ask about the machine later, a Peloton spokesperson says the company “often reviews and tests all kinds [of tech], but that doesn’t mean we plan to pursue any of those particular product areas.”

By the time I complete my own post-riot workout, I’m panting and perspiring. The class is cathartic, and the trainer’s soothingly anodyne commentary assuages the recent terror of insurrection.

At the end of the session, pop singer Lizzo croons during the cool-down phase, “Baby, how you feeling?” I wipe the sweat from my brow and kick my heels from their foot clamps as the chorus arrives. “Feeling good as hell.”

Peloton is facing off against a growing list of rivals. Here are some of them.

CEO Tim Cook says Apple’s greatest contribution to mankind will be in health. Apple Fitness+, a workout app introduced in December, is a key part of that push.

The gym franchiser, which has lost legions of members because of the pandemic, beefed up its app in April with content from Icon’s iFit.

Known for its athleisure wear, Lululemon in June paid $500 million for Mirror, a maker of a $1,500 wall-mounted device that streams video of vinyasa flows and kickboxing.

This article appears in the February/March 2021 issue of Fortune with the headline, “Can Peloton keep up the pace?”