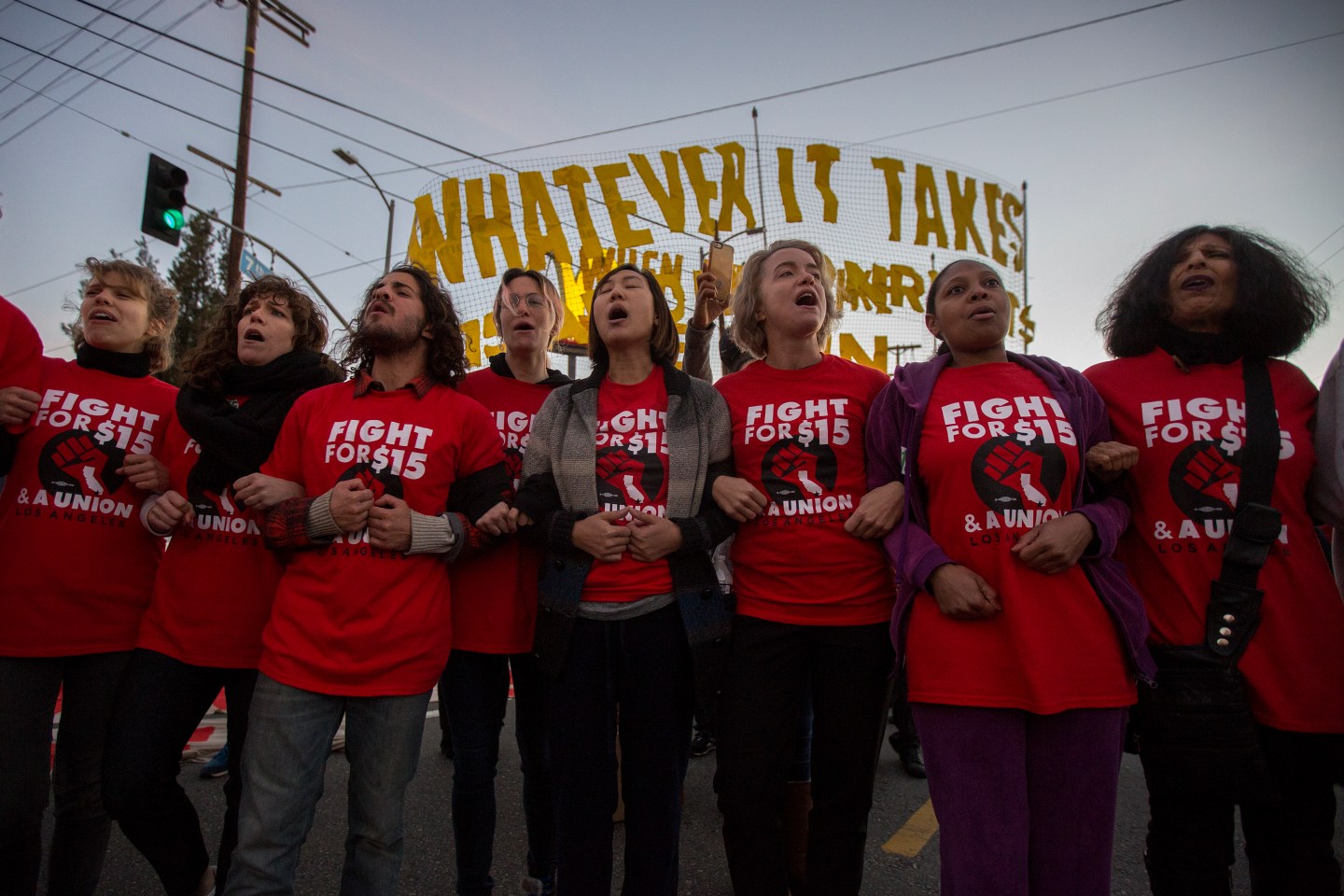 Fast-food restaurant workers at a pre-pandemic rally for a $15-an-hour wage. “Because the minimum wage is so low,” writes Lily Roberts, “many of those on the front lines of the pandemic rely on social safety net programs to keep their families afloat.”
David McNew—Getty Images

After nearly a full year of pandemic-driven financial hardship for families and small businesses, the economy is in desperate need of a jolt. The most efficient way to stimulate it is to get money to those who spend it the fastest. Raising the wages of low-income workers will stimulate the economy, substantially lower the amount the country spends on social safety net programs, and reduce economic inequality—thereby unleashing additional economic growth in a period of recovery.

Policymakers often talk about the moral reason to raise the minimum wage: People making $7.25 an hour haven’t gotten a raise since 2009, the longest time the U.S. has ever gone without an increase. Millions of the essential workers who have kept the country going this year work for so little pay that they need food stamps to feed their families. But it’s not only about fairness: In the middle of the deepest economic downturn since World War II, raising the minimum wage also makes economic sense.

It’s intuitive: Low-income people have a clear purpose for every additional dollar they make. They’re much more likely to spend a raise than a higher-income person is. In fact, the Federal Reserve of Chicago analyzed household surveys and consumer spending to determine that low-wage worker households spent an additional $2,800 in the year after a $1-per-hour increase to the minimum wage.

Findings from researchers at the Federal Reserve and MIT demonstrate that minimum wage increases have a particularly strong effect on households’ real spending on food, particularly food prepared away from home. After a year of restrictions on restaurants in an effort to protect public health, the end of the pandemic would be the perfect time to ensure that millions of Americans have raises to spend at restaurants.

In the 11 years since we last increased the federal minimum wage, $7.25 has lost nearly one-fifth of its purchasing power, because the costs of housing, education, and even food have continued to climb. There’s no zip code in the U.S. in which a person working full-time for the minimum wage can afford a very modest two-bedroom apartment.

Because the minimum wage is so low, many of those on the front lines of the pandemic rely on social safety net programs like the Supplemental Nutrition Assistance Program (SNAP, commonly known as food stamps) to keep their families afloat. In other words, the federal government is effectively subsidizing corporations that underpay their workers.

Thirty years of the highest-quality economics research has debunked the old idea that raising the minimum wage causes employers to employ fewer people. In spring 2019, prominent economists published an analysis of 138 state-level minimum wage changes since 1979, finding that the overall number of low-wage jobs remained unchanged after the increase and that low-wage workers who were already earning above the minimum also saw modest wage increases. It’s important to note that increasing the minimum wage to $15 an hour over the next five years would give businesses time to gradually adjust their payrolls as they recover from the pandemic.

Phasing in a raise to $15 an hour over the next five years would get money into the pockets of those who need it most, and it would provide a much-needed boost to economic growth. In fact, in 2014, the 13 states that raised their minimum wages at the beginning of that year added jobs at a faster rate than the states that did not, according to the U.S. Department of Labor.

One in four working women would get a raise with a minimum wage increase, while nearly one in three Black workers and one in four Latinx workers would get raises. These statistics show how skewed the labor market is: Black and Latinx workers are paid 10% to 15% less than white workers with the same background, so they’re often stuck with the lowest pay. This means a minimum wage increase would also shrink the racial and gender wage gaps that economists agree hinder the growth of the overall economy.

As we move toward a post-pandemic economic recovery, increased money to families who are the most likely to spend any marginal dollar will have an outsize effect on consumer spending. A minimum wage increase would give an overdue raise to workers and would be well timed for an economic recovery.

Lily Roberts is the managing director for economic policy at the Center for American Progress.