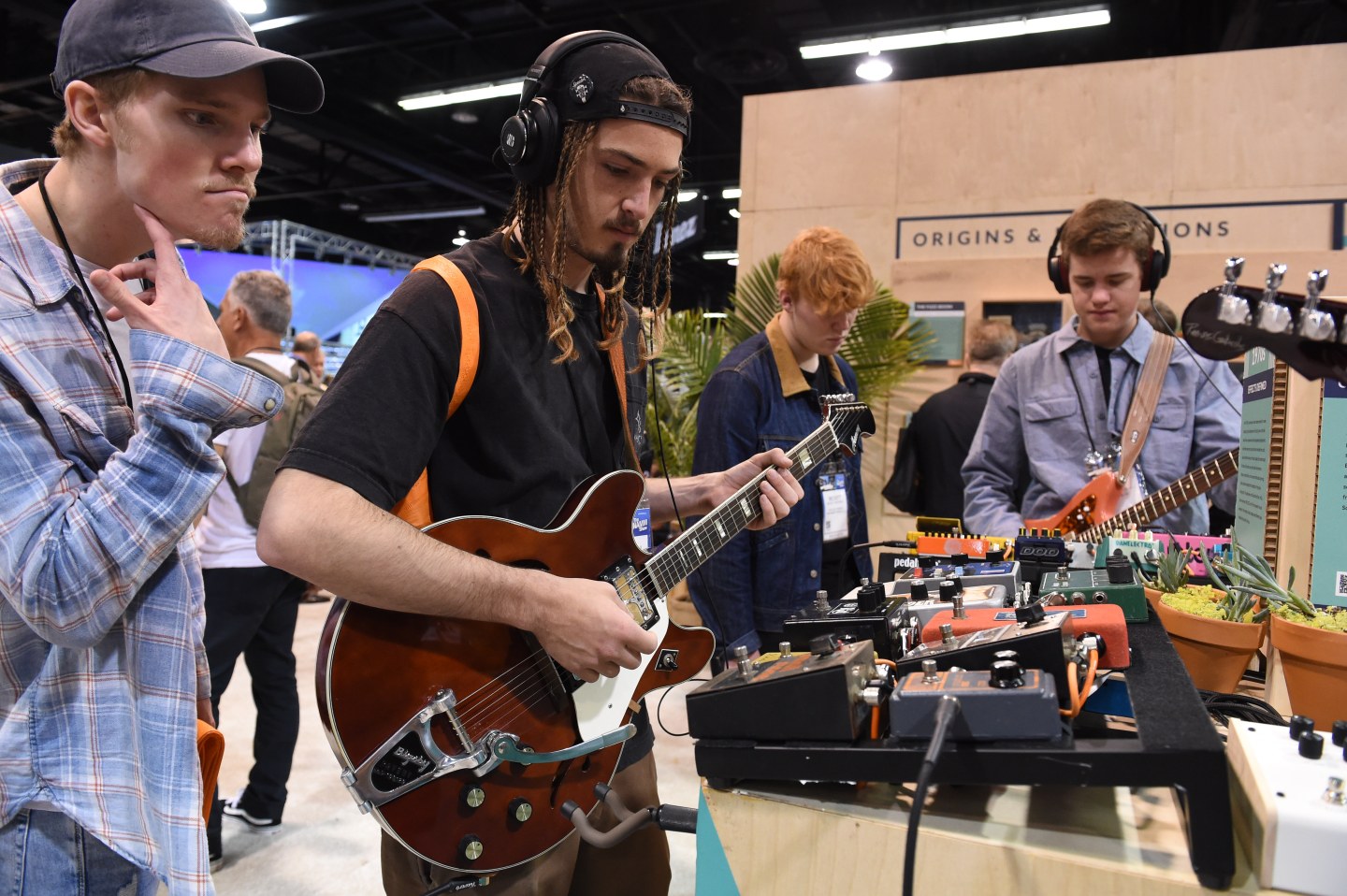 Remember that sudden national obsession with baking at the start of pandemic last year? Flour and yeast in short supply; a sourdough starter was worth its weight in gold. Well it turns out that wasn’t the only passion housebound Americans were re-discovering.

Millions also turned to guitar-playing, discovered the joys of the ukulele, and bought gear so they could record music or jam with friends virtually. And they increasingly turned online to buy what they needed to do so.

That proved to be a big boon for Reverb.com, the online marketplace focused on musical instruments and gear that Etsy bought in 2019. In the quarter ended September 30, total sales on Reverb’s site, a metric called gross sales of merchandise (GSM) totaled $205.1 million, well above the year earlier period. (Reverb’s revenue is primarily a cut of the sales and shipping price.) And for the first nine months of the fiscal year, GMS topped $600 million.

At any given time, there are some 1.5 million items listed on the site, from Fender Stratocaster guitars to Moog synthesizers to a drum kit used by Alex Van Halen. Also available are cheaper consumables like guitar strings or drum sticks.

Reverb CEO Dave Mandelbrot is not surprised by the boom in this time of COVID. “During the pandemic, as people are stuck inside, they’re playing more music,” Mandelbrot, himself an acoustic guitar aficionado, tells Fortune. And a lot of professional musicians, unable to use studios until further notice, are buying home studio equipment too.

Just as it has been for most non-essential retailers, the pandemic has been brutal for music stores. They were closed for lengthy periods and since many tend to be smaller local stores, plenty of them struggled to offer good e-commerce and online services like curbside pickup. Even the giants were scathed: Guitar Center, the 300-store, debt-laden retailer owned by private equity already on the edge, filed for bankruptcy protection in November as sales dwindled.

The upshot is the total music retail sales in 2020 fell 7% to $7.28 billion, according to the Music Trades publication, largely because of store closings. (The sales declines have moderated in recent quarters.) More notably, online sales generated 51% of total industry revenue last year, well above recent levels, making music yet another area of retail where e-commerce saw four years’ worth of growth in one.

What’s more, the booming category of fretted instruments such as guitars, ukulele, and banjos—where industry sales rose 7.7% in the last quarter—are Reverb’s bread-and-butter. Recording software and gear, another Reverb forte, is also thriving. The weakest areas of music retail, such as grand pianos, are only a tiny part of Reverb’s business.

Etsy, which bought Reverb for $275 million almost 18 months ago, has had a banner year thanks to things like homemade facemasks and a growing interest in unique, handmade products. Its GMS doubled to $6.7 billion in the first three quarters of the year and its shares have risen almost seven-fold since the pandemic was declared last March.

But Etsy also said in its most recent quarterly report that Reverb was not growing as quickly as the Etsy site, putting pressure on Mandelbrot to grow the business faster. That’s all the more important for Etsy since it has made clear it is interested in more acquisitions in the future, making Reverb is a test case for it.

A way to get local guitar stores online

While Reverb has plenty of active individual sellers (they numbered 162,000 in late 2019, the last time Etsy disclosed that figure) and hobbyists looking to unload an effects pedal they no longer need, much of the site’s volume and growth comes from music stores and the manufacturers themselves.

“By selling on Reverb, what these retailers are really doing is selling outside their local market by connecting to millions who visit,” says Mandelbrot. And for buyers, the bigger reach means “a broader ranger of inventory that any individual seller could possibly have,” he adds.

That Reverb knows what music stores need to sell online is not surprising. Reverb itself was founded by David Kalt in 2013 as the online offshoot of the popular Chicago Music Exchange, a store known for showrooms reminiscent of a museum’s exhibition space.

Reverb, operated as a standalone business within Etsy, was founded in part because Kalt found the market for vintage instruments inefficient because it was fragmented by geographic area without the liquidity offered by a critical mass of participants. And with auction houses focused on the tiny silver of instruments are a truly valuable vintage pieces anyway, that left an opening for Reverb.

“If you have a broad open marketplace with many buyers and sellers, you’ll very quickly be able to figure out exactly what something is worth,” says Mandelbrot. And that has given sellers confidence the items can list will fetch a realistic price, especially when it’s a valuable item. That extends to used items broadly, not just vintage pieces: Reverb recently sold a used $500,000 recording console.

To achieve that, Reverb’s listings include a price history of items similar to the one listed.

At the same time, there is room to improve Reverb, just as there was at Etsy when Josh Silverman took the reins of the once struggling e-commerce player in 2017. Like Silverman who professionalized Etsy to the occasional consternation of sellers, Mandelbrot is investing in marketing and improving shipping, including letting sellers offer lower rates if they buy multiple items. Reverb has also spent money on speeding up access to customer support.

Not everything on Reverb is about playing music. There is a fair amount of artist paraphernalia such as Def Leppard tour t-shirts or autographed photos of icons like Mott the Hoople’s Ian Hunter.

But don’t expect Reverb to become a massive souvenir shop for music fans, however much that could be a growth opportunity. There is no shortage of marketplaces out there for things like t-shirts and records. So Mandelbrot says he wants Reverb to stick to what it does best.

“With that real focus on musical gear, we can bring in expertise and we bring a robustness to this market that we don’t feel we’d be able to full create if we were to expand too broadly,” he says.

Mandelbrot bristles at the suggestion that generalist sites like eBay, with its sizable instrument and gear assortment, can compete with Reverb given the passionate nature of musicians.

“It’s not even close,” he says. “Reverb was built specifically for buying and selling instruments by musicians.”