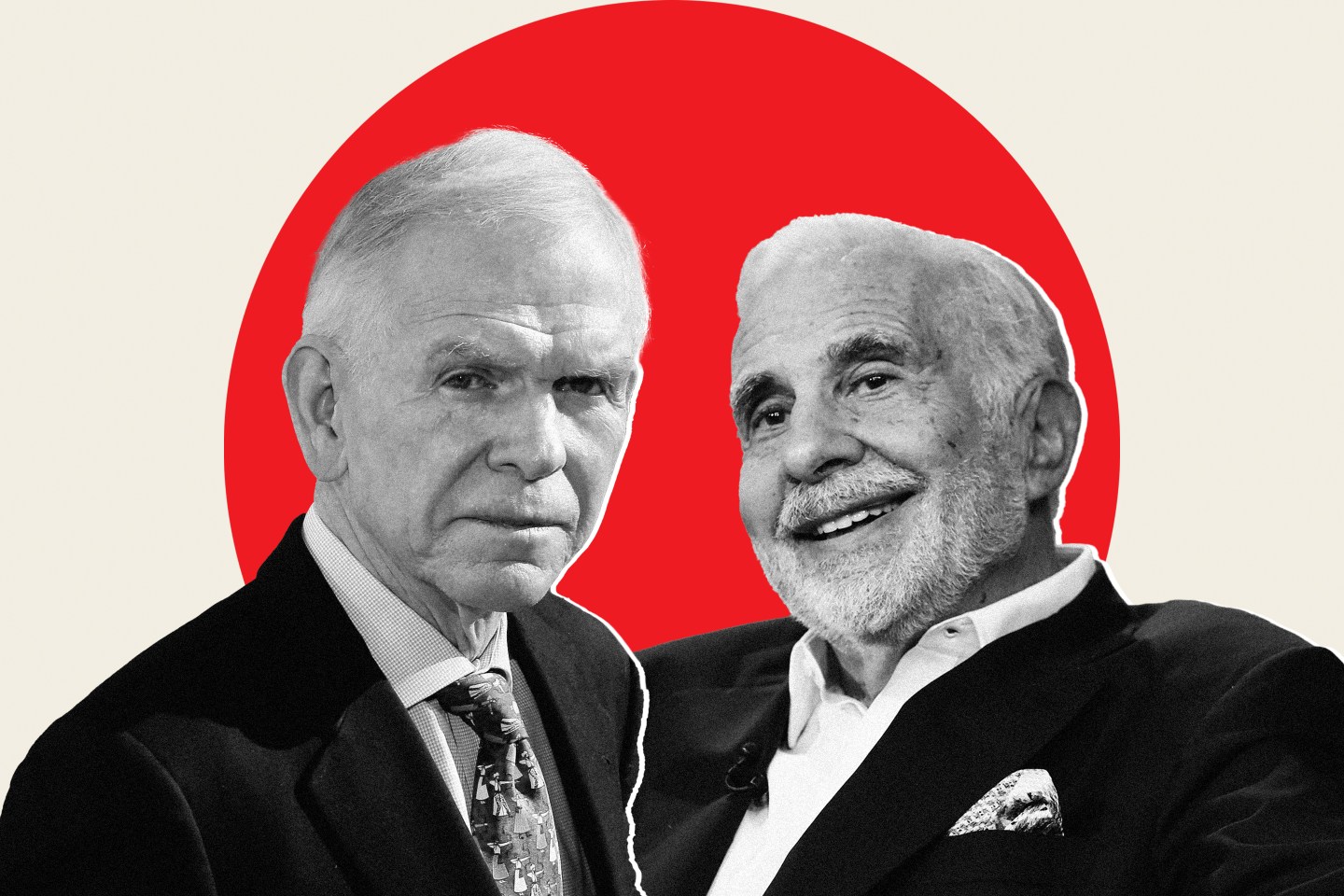 During the week of Jan. 4, two of the all-time great stock market sages—who’ve been expert at calling speculative crazes for decades—charged that the bulls had lost their marbles. Carl Icahn and Jeremy Grantham went public claiming that equities are vastly overpriced and due for a steep selloff. The same week, the cockeyed optimists from Wall Street money managers to Gen Xers hooked on day trading ignored their warning, staging still another buying frenzy that on Thursday, Jan. 7, pushed the S&P 500, Dow, and Nasdaq to fresh records.

Between them, Icahn, who’ll turn 85 next month, and Grantham, at 82, have a total of around 120 years of experience navigating the markets and skirting just the kinds of disasters they see coming. Icahn owns over 90% of industrial conglomerate and investment vehicle Icahn Enterprises (market cap: $11.8 billion), and holds billions more in shares of companies as diverse as Cheniere Energy, Newell Brands, and Xerox Holdings. Though Icahn moved his operations from Manhattan to Miami in late 2019, he remains as busy an activist as ever. Grantham, a native of Britain, is cofounder and long-term investment strategist at Grantham, Mayo, Van Otterloo, or GMO, the $65 billion asset management stalwart.

Today, Grantham’s interests center on his foundation supporting environmental causes, the institution he’s backed with 92% of his wealth. But though he’s no longer picking individual stocks, Grantham follows the market’s overall trajectory closely, and he prides himself on calling when types of assets are excessively cheap or pricey compared with past periods. Grantham and Icahn come at their forecasts from different angles. This writer has interviewed Icahn many times, and he’s never heard the storied investor talk about price-to-earnings multiples, discount rates, risk premiums, or any of the other metrics the experts typically cite in assessing where the market stands. I have no doubt Icahn knows all the numbers, but he appears to rely on instincts that tell him, I’ve seen this scenario before, and it always spells trouble.

By contrast, Grantham summons sundry metrics and data to support his case. But what sounds the alarm for Grantham, as for Icahn, isn’t so much the numbers as the atmospherics, the sense of a world gone mad, of wild speculation, of zealots—outraged at any suggestion stocks will drop—taking charge. What prompted Icahn and Grantham to issue their warnings at the same time? The veterans both see the same “lunatics are taking over the asylum” script taking hold, especially in the last few weeks, that presaged past meltdowns.

This reporter called the Nasdaq frenzy in 2000 and warned that housing prices had gone nuts in 2004, two years before the giant selloff: proof the craziness can last a long time. In the case of the Nasdaq, it was clear that bulls had wildly overblown expectations for huge future growth in profits that couldn’t happen. In the housing craze, prices had become totally detached from the force that governs them, the level of rents on homes and apartments. In both cases, the bulls bought the notion that valuations had permanently reached a new, much higher plateau than in the past. When reality struck, the Nasdaq dropped 82%, and housing prices retreated over 50%. The falls took prices well below their levels when the run-ups began.

Icahn made his comments on Jan. 4 in an off-air conversation with CNBC anchor Scott Wapner. Icahn had warned that equities were overvalued on April 25, when the S&P was 25% cheaper than today, but he clearly believed things had tilted from frothy to crazy since. This time, he suggested to Wapner that a major selloff is looming. “In my day, I’ve seen a lot of wild rallies with a lot of mis-priced stocks, but there’s always one thing they all have in common,” declared Icahn. “Eventually they hit a wall and go into a major painful correction, and nobody can predict when it will happen. But when it does, look out below.”

Icahn didn’t specify any bets he’s making to guard against a possible cataclysm, but he did note that he’s been concerned for some time and is “pretty well-hedged.” In conclusion, Icahn cautioned, “Another thing [these wild rallies] have in common: It’s always said ‘It’s different this time,’ but it never turns out to be the truth.”

Grantham delivered his salvo in a long essay on GMO’s website titled “Waiting for the Last Dance: The Hazards of Asset Allocation in the Late Stages of a Bubble.” While Icahn’s warning is general, Grantham is extremely specific, detailed, and even more dire—he even dares predicting that the hurricane could strike soon. “The long, long bull market since 2009 has finally matured into a full-fledged, epic bubble,” writes Grantham. “Featuring extreme overvaluation, explosive price increases, frenzied issuance, and hysterically speculative investor behavior. I believe this event will be recorded as one of the great bubbles in financial history, right along with the South Sea bubble, 1929, and 2000.” He acknowledges that going against the crowd will take courage. “Every fault of human psychology will be pulling investors in,” he cautions.

Grantham cites four occasions when he correctly saw trouble brewing and dumped stocks. In 2008, he came close to calling the market top, and also “nailed” the lows of early 2009, when he jumped back in. In 1987, he saw a bubble building in Japan when its market P/E hit 40, dwarfing the previous high of 25. Grantham sold all of his positions but was three years early. Shares soared for a while, driving multiples to 65 before the market collapsed in 1990. Still, Grantham says he made the right call: He scooped up bargains at prices far below where he had bailed out three years before. He also lowered his U.S. holdings by half in 1997 when the S&P multiple surpassed its 1929 peak, only to soar until June 2000. But GMO grabbed shares during the 40% drop through late 2002, a coup that produced much better returns in future years than holding the same portfolio through the roller-coaster ride.

Grantham notes two factors that are common to these crazes. The first is that prices spike at an accelerating pace in the late stages, signaling that we’re getting closer and closer to a crash. That’s precisely what’s happening now: Since regaining its all-time high set in February by mid-August, the S&P has vaulted another 12.4%, and since late October, the Nasdaq has jumped 20%. Second, as Grantham writes, “The single most dependable feature of the late stages of the great bubbles of history has been really crazy investor behavior, especially on the part of individuals.” He adds that for the first 10 years of this bull market, which began in 2009, stocks gradually ground higher, and were getting more and more expensive, but wild excesses were mainly absent. Now the mantra that “the higher prices go, the higher they’ll go from there” is the new normal. Grantham cites the fleeting embrace of Kodak, Hertz, and Nikola, and especially enduring infatuation with Tesla, as hallmarks of a market gone loco. The ardent environmentalist stresses that though he proudly drives the Model 3, his “favorite Tesla tidbit” is that it boasts a market cap of $1.25 million for every car it sells, 140 times the GM figure of $9,000.

Investors’ craving for IPOs is another bad sign. Grantham notes that last year saw 480 public offerings, including 248 SPACs (special purpose acquisition companies), easily eclipsing the record 408 IPOs in 2000. In one key respect, he says, this over-the-top bull market is vastly different from the others. Its predecessors shared two main features: a lenient Federal Reserve that flooded markets with easy credit and held interest rates low, and what he calls a “near-perfect economy” boasting strong, steady growth that looked like it would last a long time. “Today’s wounded economy is totally different,” he says. America’s facing the danger of a double dip as the COVID-19 pandemic rages on, and unemployment is likely to remain stubbornly high even when the crisis ends. Grantham marvels that prices relative to earnings are now much higher than when the jobless rate was at historic lows and sales, profits, and incomes were surging. “Today’s P/E ratio is in the top few percent of the historical range, and the economy is in the worst few percent,” he says. For Grantham, that divergence tells us more about the raging market fever than the rash of new SPACs.

Based on what he’s seen in the sunny preludes to past storms, Grantham doesn’t buy the bulls’ main argument: that extremely low interest rates, and the Fed’s pledge to keep them down for a couple of years to come, justify permanently high prices for stocks. “The mantra for 2020 was that engineered low interest rates can prevent a decline in asset prices. Forever!” he observes. But low rates and super-loose money didn’t prevent stocks from cratering in 2000, he notes.

I agree with Grantham’s view that low rates don’t guarantee high valuations. “Real” rates, adjusted for inflation, reflect demand for capital, and they tend to track economic growth. The faster the economy is waxing, the more profitable new investments become, and the more companies compete for the capital needed to fund those investments. That competition drives up rates. If rates may remain low for a long time, it probably means demand for capital is weak because companies, and hence the economy, are running in place instead of briskly expanding. So low rates generally mean low growth and low profits. And the bulls are banking years and years of fast-rising earnings for today’s ultra-pricey sprinters to grow into their gigantic market caps. They’re predicting a future of both ultralow rates and ultrahigh profit growth that’s never reigned in the past.

History doesn’t support the “low rates as rocket fuel” view. Rob Arnott, chief of Research Affiliates, the firm that oversees investment strategies for $145 billion in ETFs and mutual funds, points out that in the 1950s, the 10-year Treasury yielded 1.0% to 1.5%, yet multiples were less than one-third of today’s levels. Grantham also observes that Yale economist Robert Shiller, who called the housing collapse of 2009 and tech bubble of 2000, now says that although multiples, using an average of 10 years of earnings, are even higher than in 1929 and 2007, today’s lofty prices may be somewhat justified. The reason: The spread between the probable return on stocks and what you can get from bonds is better than in either of those two periods. Both Grantham and Arnott reject the view “stocks are still good ’cause they’re so much better than bonds.” “What Shiller’s really saying is that bonds are terrible, and stocks are slightly less terrible,” says Arnott. Grantham agrees: “Bonds are even more spectacularly expensive by historical comparison than stocks. Oh my!”

Grantham acknowledges that it’s impossible to call a top. Indeed, he often fled overpriced markets well before the peak. But he strongly implies, as he puts it, that the music will stop, and the dance end, fairly soon. He cites two reasons: the intensifying of enthusiasm for the bulls, and the acceleration in prices that marks a mania’s death throes. Grantham says that investors who’ve been sitting out since the summer of 2020, and missed the big run-up, made the right decision, implying they’ll be able to buy shares a lot cheaper in the aftermath of the coming catastrophe. Those are words the bulls will hate. But getting out when things were getting crazy proved a winning strategy for Grantham, and Icahn, for decades. Then they’ll do what has always made them successful—feast on the bargains when investors panic and prices go irrationally, crazily low. That’s the kind of craziness these legends crave.