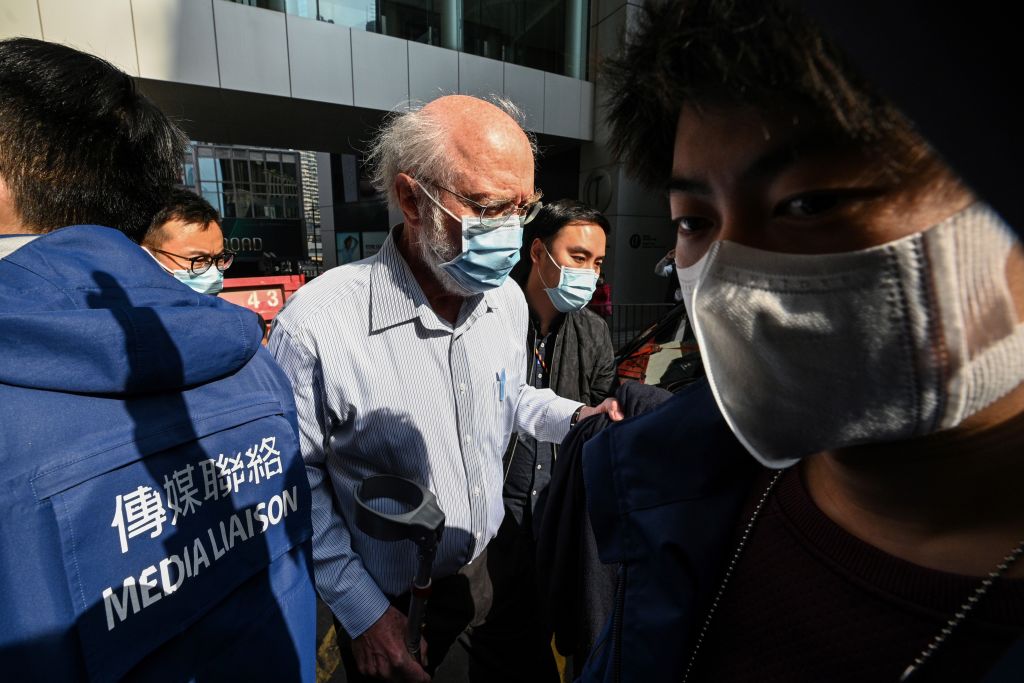 John Clancey, a U.S. solicitor with law firm Ho Tse Wai and Partners that is known for taking on human rights cases is led away by police after he was arrested under a new national security law in the Central district in Hong Kong on Jan. 6, 2021.
PETER PARKS—AFP/Getty Images

Police said they had swept up about 50 people in the Wednesday operation. Those arrested included several prominent former lawmakers and allegations centered on an informal primary that drew more than 600,000 voters in July to choose candidates for a September legislative election that was subsequently postponed by the government.

“The sweeping arrests of pro-democracy demonstrators are an assault on those bravely advocating for universal rights,” tweeted Antony Blinken, Biden’s nominee for secretary of state. “The Biden-Harris administration will stand with the people of Hong Kong and against Beijing’s crackdown on democracy.”

Police arrested lawyer John Clancey, who served as treasurer for the primary organizers, according to Jonathan Man, a partner at Hong Kong’s Ho Tse Wai & Partners, which has handled hundreds of protest cases and where Clancey is a solicitor. Man said Clancey is a U.S. citizen, potentially providing a new source of tensions between Beijing and Washington.

Clancey is also the chairman of the Asian Human Rights Commission and the Asian Legal Resource Center and a founding member of the Executive Committee of the China Human Rights Lawyers Concern Group, according to his Ho Tse Wai biography page.

The mass arrests of largely moderate pro-democracy campaigners accelerate an ongoing political crackdown in the Asian financial hub, which has prompted condemnation from foreign governments, U.S. sanctions and the suspension of numerous extradition treaties with Hong Kong. The move comes as the outgoing Trump administration continues to hit Beijing over its assertive policies in the city and as Biden prepares to take office this month, with China representing one of his administration’s main foreign policy challenges.

“This is a total sweep of all opposition leaders,” said Victoria Hui, an associate professor at the University of Notre Dame specializing in Hong Kong politics. “If running for office and trying to win elections means subversion, it is clear that the NSL is aimed at the total subjugation of Hong Kong people. There should be no expectation of elections in any sense that we know it if and when elections are held in the future.”

Secretary for Security John Lee told an afternoon briefing that activists had been arrested for planning to create “mutual destruction” in a bid to paralyze the government and that the detentions for alleged subversion were necessary. The opposition figures wanted to plunge the city into an “abyss,” Lee said.

Former lawmakers Alvin Yeung, James To, Andrew Wan and Lam Cheuk-ting, as well as prominent academic and activist Benny Tai, were arrested by the police’s national security branch on allegations of subversion, according to Facebook postings and media reports. Also detained was former lawmaker Claudia Mo, a leading opposition figure and one of the city’s most outspoken critics of China’s policies in Hong Kong.

The national security law was imposed by Beijing on the former British colony in June, sparking international condemnation led by the U.S. that Beijing was reneging on promises to guarantee the city’s unique freedoms following its return to Chinese rule.

While Chinese officials have justified the legislation—which bars subversion, terrorism, secession and collusion with foreign forces—as a necessary tool to quell local unrest and restore stability to the city after historic protests in 2019, the law has so far mainly been used against non-violent political opponents and dissidents.

Pro-government lawmaker Holden Chow tweeted that those arrested Wednesday had violated the security law because they had a “clear aim to paralyze” the local government and were threatening to “remove the Chinese sovereignty over Hong Kong.” Secretary for Mainland and Constitutional Affairs Erick Tsang said ahead of the primary last July that it may violate the national security legislation.

At the time, Tai dismissed such criticism of the primary as “­absurd.”

The opposition primary contest at the heart of the latest police roundup drew 610,000 residents to the polls—more than 13% of the city’s registered voters—in a procedural exercise common in democracies worldwide. The turnout underscored the momentum generated by Hong Kong’s historic protest movement, on which the pro-democracy opposition was hoping to capitalize in a Legislative Council election originally scheduled for September.

Opposition figures hoped to access a provision in the city’s charter to force Chief Executive Carrie Lam to resign by voting down her budget. The primary was condemned by China’s top agencies for Hong Kong as an “unlawful ­manipulation” of the city’s election system and a violation of the national security law.

Hong Kong’s government first disqualified a number of opposition figures and then delayed the election by a full year, citing the coronavirus.

U.S. Secretary of State Michael Pompeo said at the time that there was “no valid reason for such a lengthy delay,” and that the “regrettable action confirms that Beijing has no intention of upholding the commitments it made to the Hong Kong people.”

“The political purge continues in Hong Kong,” said U.S.-based activist Samuel Chu, the managing director of the Hong Kong Democracy Council. The Chinese Communist Party “is remaking the rule of law and government in Hong Kong in its own image as a one-party authoritarian regime with lightning speed.”