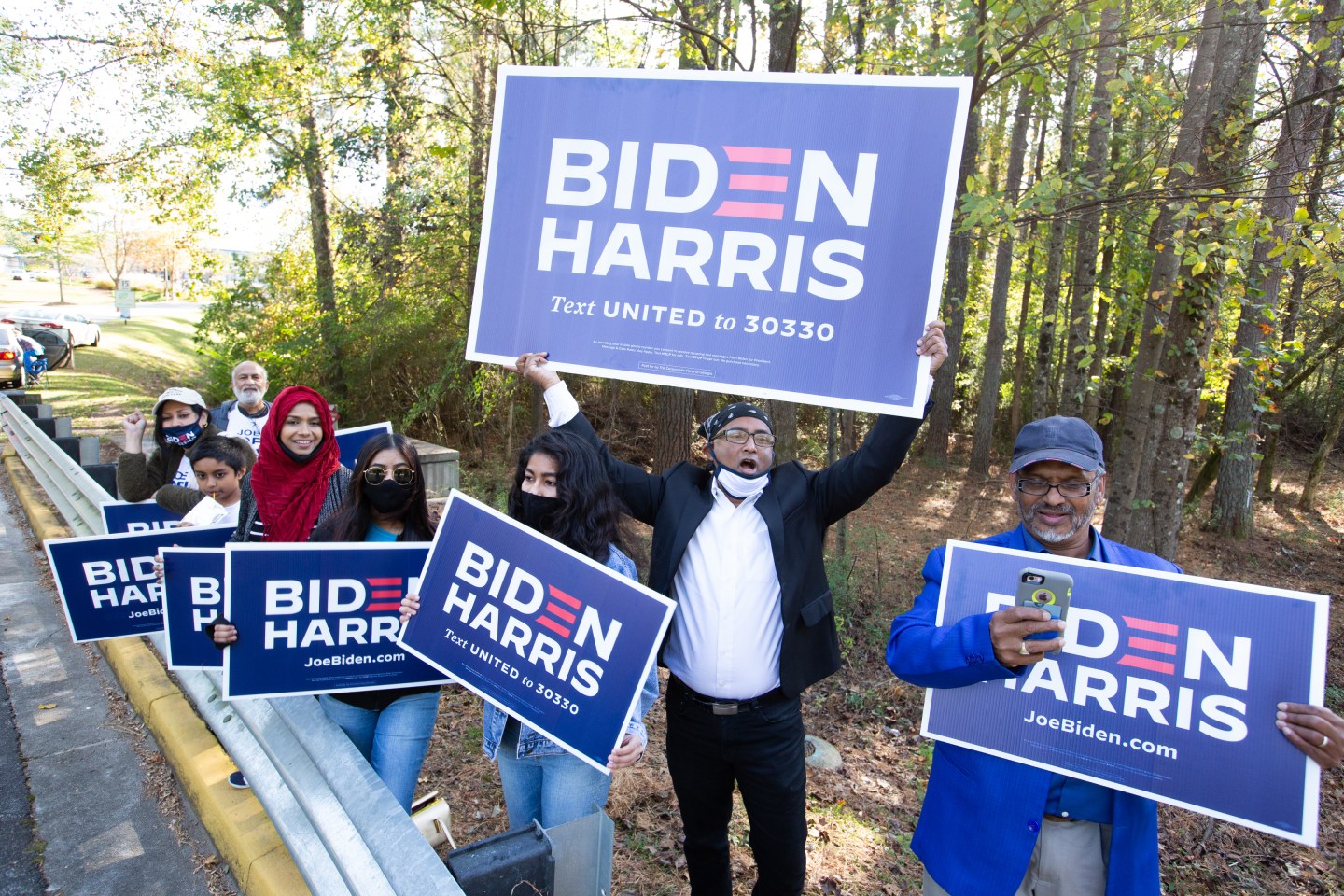 Joe Biden’s victory in Georgia was surely the most surprising red state flip in the 2020 presidential election. Exploring the strikingly rapid transformation of Gwinnett County, the state’s largest suburban county, shows how this upset happened, while offering insights into the state’s upcoming U.S. Senate runoffs.

At the midpoint of the 20th century, Gwinnett, 30 miles northeast of Atlanta, was largely rural, with just 32,000 inhabitants, more than 95% of them white. Scarcely 2% of the residents had completed four years of college, and only 25% of the workforce held professional or managerial jobs. Who could have imagined that today, Gwinnett County would be home to nearly 950,000 people and one of the most diverse counties in the country?

Gwinnett’s path would be shaped by nearby Atlanta, which lost 162,000 white residents between 1960 and 1980. Gwinnett saw its white population swell by 102,000 over the same period. The county also grew with the arrival of thousands of white migrants from elsewhere in the nation, drawn by the dynamic metropolitan Atlanta economy. By 1990, some 357,000 people, more than nine out of 10 of them white, lived in Gwinnett County.

Growth in Gwinnett would accelerate, even as the new arrivals became more diverse. By 1990, metro Atlanta, including suburban counties like Gwinnett, was becoming a top destination for African-Americans on the move from other parts of the U.S. Meanwhile, the allure of the suburbs was accelerating the outmigration of upwardly mobile Black people from Atlanta itself. The share of Gwinnett’s population that was African-American more than doubled in the 1990s, and the Black population grew by 140% in the decade that followed. With this influx continuing, and many Gwinnett whites heading off to the decidedly whiter exurbs like Barrow and Walton counties, by 2020, 30% of Gwinnett residents were Black.

This is only part of the story of Gwinnett’s diversification. The explosion of construction jobs spawned by the 1996 Olympic Games, in combination with a falloff in employment in the Texas and Louisiana oilfields, exerted a push-pull effect on Latino in-migrants, so that today, Latin Americans constitute 20% of the county’s population. The heated pursuit of foreign investment, reflected in a current count of more than 600 foreign-owned companies in the county, also drew a steadily expanding stream of Asian and Asian-American workers, who liked the county’s highly touted schools and relatively low living costs. By 2020, residents of Asian descent accounted for 13% of Gwinnett’s population.

These arrivals made Gwinnett more prosperous and diverse but were not universally welcomed by the non-Hispanic white population. While Gwinnett officially became a majority nonwhite county by around 2007, it wasn’t until 2018 that representatives of other ethnic groups first managed to win seats on the county commission and the board of education.

White resistance had partisan implications. Gwinnett became a Republican stronghold in presidential elections in 1964, and the county voters strayed from the GOP camp only once in the next 50 years, to support fellow Georgian Jimmy Carter for President in 1976.

But as the county’s nonwhite population grew, Democrats gained ground in Gwinnett during presidential elections.

Barack Obama, running only five points behind John McCain in Georgia in 2008, captured Newton, Rockdale, and Douglas, three other metro Atlanta counties whose nonwhite populations were on the rise. Obama maintained this suburban beachhead in 2012, and four years later, Hillary Clinton picked up Gwinnett and two other diversifying counties.

With Democratic hopes buoyed by Clinton’s showing, state legislator Stacey Abrams, who is African-American, ran for governor in 2018. She narrowly lost to Republican opponent Brian Kemp—but bested him in Gwinnett by more than 14 percentage points. Abrams’s performance persuaded the national Democratic Party to mount a serious presidential effort in Georgia.

But instead of persisting in futile efforts to bring blue-collar whites back into the fold, the Democrats would concentrate on molding a growing and more politically engaged nonwhite population into a potent political force in the state. To that end, Abrams and her allies fought voter suppression, expanded registration, and boosted turnout. The effort was decisive for Biden, who carried essentially the same counties as Abrams two years ago, while besting her number of votes statewide by more than 550,000.

This was the culmination of a speedy political reversal in Gwinnett. Obama lost the county by nine points in 2012 only to see Biden win it by 18 points just eight years later.

This swing is not explained by the “hot take” that Biden owes his victory nationwide to disgusted white establishment Republicans in the suburbs, who crossed party lines rather than vote for Donald Trump but otherwise stuck with GOP candidates down-ballot. Trump certainly lost some support among white suburban voters in Georgia. But ultimately, it was a racially and culturally diverse group of relative newcomers to the burbs who put Democrats over the top.

Sure, the pundits are right that Biden won in the suburbs—the state’s three most populous suburban counties (DeKalb, Cobb, and Gwinnett), along with Fulton, where Atlanta is located, accounted for over half of Biden’s vote gains over Hillary Clinton’s totals from four years ago. But it’s also true that of those counties, Cobb is the only one where nonwhites are not the majority. (And Cobb misses being majority nonwhite by a single percentage point.)

There are limits to what may be inferred from comparing voter registration percentages to shares of the actual vote, but in Gwinnett County the correlation is too close to ignore: Whites now account for 40% of the county’s registered voters, and Trump won 40% of the vote. Likewise, in Georgia’s Seventh District, the only House seat in the state that Democrats flipped, Carolyn Bourdeaux’s vanquished Republican adversary garnered the same share of the vote in Gwinnett as Trump.

Moreover, the perceived national pattern of white suburban Republicans voting for Biden but for the GOP in other races certainly did not play out in Gwinnett. Instead, Democrats racked up large margins in the two senatorial contests, while local matchups saw more ousters of white Republicans by nonwhite candidates, including the election of Gwinnett’s first Black sheriff. Here Democrats didn’t raid the traditional Republican base, but simply overwhelmed it.

Despite this, Republicans in January’s U.S. Senate runoffs are doubling down on their presidential election strategy of tailoring their message to the die-hard Trumpers and casting Democratic challengers Jon Ossoff and Raphael Warnock as America-hating socialists, communists, or anarchists.

The Republicans are gambling that the traditional wisdom that nonwhite turnout fades badly in runoff elections will hold true yet again. But much has changed in the nonwhite population, especially in the suburbs.

Should Georgia Democrats prevail in these two races, they will have managed an even greater feat than the one they pulled off on Nov. 3. They will also have shown the rest of the country that the demographic forces transforming Georgia’s politics could fuel further Democratic success in rapidly diversifying suburban areas nationwide.

James C. Cobb is a contributing editor at Zócalo Public Square and the Spalding Distinguished Professor of History Emeritus at the University of Georgia. His latest book is The South and America Since World War II. This piece was written for Zócalo Public Square.