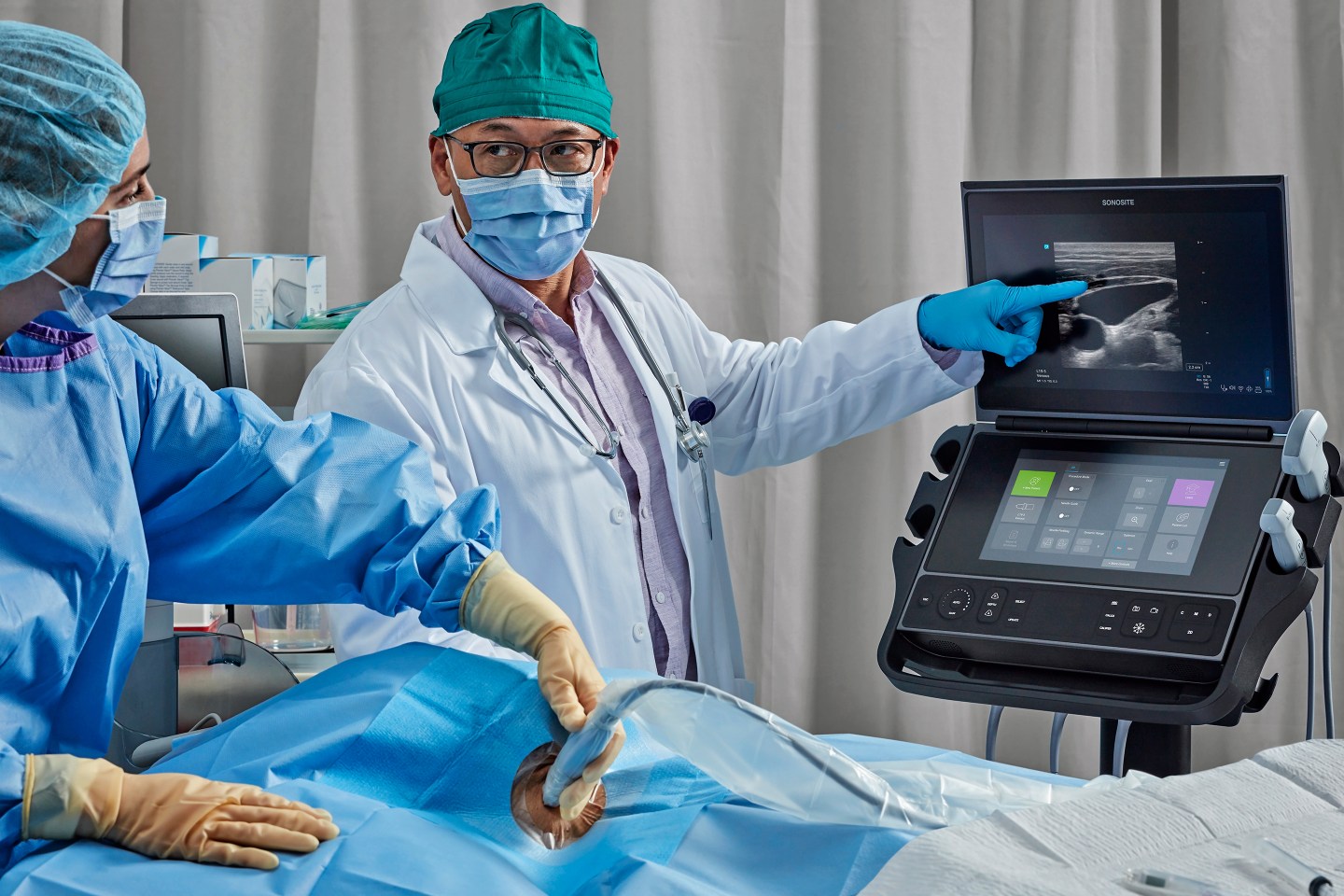 You usually think of ultrasound machines as the devices used in hospital radiology labs to produce images of the fetus in pregnant women, or pinpoint damage from heart attacks. But one of the biggest advances in the fight against COVID-19 is repurposing portable, battery operated, bedside ultrasound scanners to instantaneously show which organs are hit by the disease, and display digital images of the ravages to the heart, lungs or kidneys. Those super-quick damage checks are fast-tracking the formerly slow walk of COVID patients from the ER to the ICU.

In the early days of the pandemic, hospitals were relying on full-body CT or CAT scans that took an hour or more to identify if and where a patient might need life-saving treatments. “Patients were dying in the machine, or in a resuscitation bay before we knew where the problems were,” says Dr. Diku Mandavia, chief medical officer at FUJIFILM Sonosite, the unit of the Japanese document processing and healthcare giant that’s the world’s market leader in point-of-care ultrasound gear. “COVID-19 is so dangerous because it’s a multi-organ disease. Point-of-care ultrasound is like a flashlight inserted into the body. In the instant it takes to turn on a flashlight, you can survey all the organs and blood vessels.”

In early September, the FDA cleared Sonosite’s devices for aiding in the diagnosis of COVID-19 afflictions, and today, its machines are getting never-before-seen mileage zipping around ERs and ICUs from one newly-admitted patient to the next. The pandemic has helped make the scanners-on-wheels––also produced by such rivals as Philips and GE––as the fastest-growing segment in the medical imaging industry. Dr. Mandavia, who likes comparing Sonosite devices to staples in your garage toolbox, says that “for fixing COVID-19, they’re the hospitals’ Swiss Army knife.”

Today’s Sonosite modules are about the size of an open laptop, and weigh about ten pounds. They’re typically mounted at chest-height on a metal column attached to a 4-wheel base. Some super-miniaturized models are hand-held, so that a physician can move the scanning “needle” in one set of fingers, while reading the monitor held in the other hand. Those compact units are a world apart from the first cumbersome versions that Mandavia encountered. After graduating from med school in rural Canada, the young physician in the early 1990s took his first job L.A. County + U.S.C. Medical Center in downtown Los Angeles. “It was an urban battlefield, in some ways the same kind of battlefield we’re seeing for COVID,” he recalls. “It was the height of the gang epidemic. We had knifings, shootings, car accidents. It was like a wartime MASH unit.” When patients arrived suffering from internal bleeding, the only option for finding where the bleeding came from was running them through a CAT scanner. The imaging took so long, he recalls, that victims would die before doctors could determine the right operation to perform, foreshadowing today’s crisis.

At the time, ultrasound machines were huge, weighing about three hundred pounds, and limited to the radiology departments. “We tried moving them around, but they were the size of refrigerators,” says Mandavia. To make matters worse, the probes would break every week, sidelining the machines for days at a time. But in 1999, L.A. County got the first compact device that could speed through hospital corridors and provide the quick imaging that Mandavia sought. The Sonosite 180 originated from a Department of Defense grant for production of a portable ultrasound unit rugged enough for battlefield use. The big breakthrough was going from analog to digital by deploying ASIC chips, enabling Sonosite to create the first miniaturized, battery operated device.

Mandavia saw huge potential in spreading the use of scanners to diagnose a wide range of life-threatening conditions. Throughout the 2000s, he advised Sonosite on developing new models, and in 2009, joined the manufacturer full-time as chief medical officer. “We saw the benefits of miniaturization and bringing it to the bedside,” he says. “You think about babies and radiology, but not operating rooms or EMS transfers or use in helicopters. It was making the units smaller and reducing the cost that brought them to so many other specialties.” That versatility would pay off in the COVID crisis.

In 2012, Fujifilm purchased Sonosite for $995 million. The deal was a landmark in the Japanese giant’s $9.5 billion, two-decade-long expansion in the U.S. Fujifilm has also made three major acquisitions in contract manufacturing for biologics. It’s currently partnering to produce two drugs for combatting COVID-19: a Novavax vaccine at its facilities in Texas and North Carolina, and an Eli Lilly therapeutic, developed in collaboration with the Gates Foundation, at its complex in Denmark. All told, healthcare now accounts for $4.6 billion of Fujifilm’s total sales of $21.2 billion.

The nearly ninety-year-old icon retains a strong presence in document processing and digital cameras. But Fujifilm saw the collapse in film coming early on, and diversified into expanding areas such as cosmetics and medical imaging. As a result, it now boasts sturdy growth and a $30 billion market cap. Its reinvention-on-the-fly stands in sharp contrast to the collapse of its one-time rival in film, Eastman Kodak.

Mandavia first received word of the mobile units’ effectiveness in fighting COVID from abroad. He got part of his intelligence on the COVID front lines, since he still works part-time as an ER physician at LA County + USC. “If you flash back to January and February, we had very little information in the U.S. on how serious the disease was,” he says. “Seldom in modern medicine have we faced something that’s not in the textbooks and baffles the experts.” But since Sonosite devices are plentiful in hospitals worldwide, Mandavia started getting reports from the outbreak’s first targets. “We were hearing from doctors first in China, then in Italy, that they were using point-of-care machines to image the lungs, heart, and blood vessels of patients struck by COVID-19,” he says.

The news from Milan, ground zero in Europe for the pandemic, that came over social media and emails to Mandavia from physicians on the ground, underscored the newfound power of ultrasound. “Hospitals in Milan were getting hundreds of COVID patients at a time,” recalls Mandavia, “so they couldn’t put them through CAT scanners.” Instead, doctors and nurses improvised by using a combination of ultrasounds that expose damage to the organs, and pulse oximetry that deploys a sensor attached to a finger for measuring oxygen levels in the blood, to triage the severely ill from the less-sick patients.

“That told us we had a new use for the devices,” says Mandavia. In the Spring, orders for Sonosite machines surged, especially in Europe.

He notes that widespread use of the portable units makes hospitals far safer for the staff. “Constantly transferring patients from ICUs to radiology means lots of trips through the hallways where they can spread the virus so that doctors and nurses risk catching COVID,” he says. “With the portable devices, we can do the scans right at the patient’s bedside as the devices go from ICU bed to ICU bed, so the patients don’t need to move around nearly as much throughout the hospital.” Shifting to point-of-care imaging also frees up CAT scanners for essential uses such as identifying bone fractures, tumors or cancers. Every time a COVID patient goes through a CAT, the hospital staff must spend 30 to 40 minutes cleaning the machine to ensure it’s virus-free. That requirement shrinks the hours-a-day it’s scanning patients and generating revenue.

A COVID side effect plaguing hospitals: Administering the standard general anesthetics put operating room staff at risk, since the process requires running an airway tube down the patient’s trachea. Hospitals are cutting back on the elective surgeries where they make most of their money out of fear doctors and nurses will catch COVID from putting the airway tube place. Once again, ultrasound provides a solution, the use of nerve blocks in place of general anesthesia. “The scanner looks through the skin and to see the nerves, so that the anesthesiologist can pinpoint where to put the needle and inject the anesthetic around the nerve,” says Mandavia.

Mandavia describes the array of images that flash on the monitor during a COVID screening. “The devices show how well the heart is pumping,” he says. “They also signal kidney failure.” A crucial function is flagging blood clots that regularly threaten COVID patients’ lives. “The monitor shows clots in the blood vessels and in the legs that can go to the heart and kill you, and that need to be detected fast,” he adds. The images also guide physicians on where to precisely place the catheter that sends blood transfusions or drugs preventing cardiac-failure to the heart. “The catheter is like a plastic straw that goes into the neck and down the jugular vein into the heart,” explains Mandavia. “Ultrasound enables the doctor to pinpoint where the vein is, and where the catheter should go.”

Mandavia warns that the resurgence in COVID cases signals that we’re entering a scary new period. Hospitals must greatly boost capacity to handle the big surge to come. City parks may once again be sprouting tents sheltering makeshift ERs and ICUs. “When the wave hits, you can’t lug a CAT scanner to a tent, but it’s easy to use point-of-care ultrasound devices that weigh little and work on batteries,” he says. The innovation born of gang violence in L.A. is now combating a new wave of killing that’s as fast-moving and unpredictable as it is deadly. Fortunately, to every corner of a hospital overrun by COVID, the new mobile weapon can rush as well.