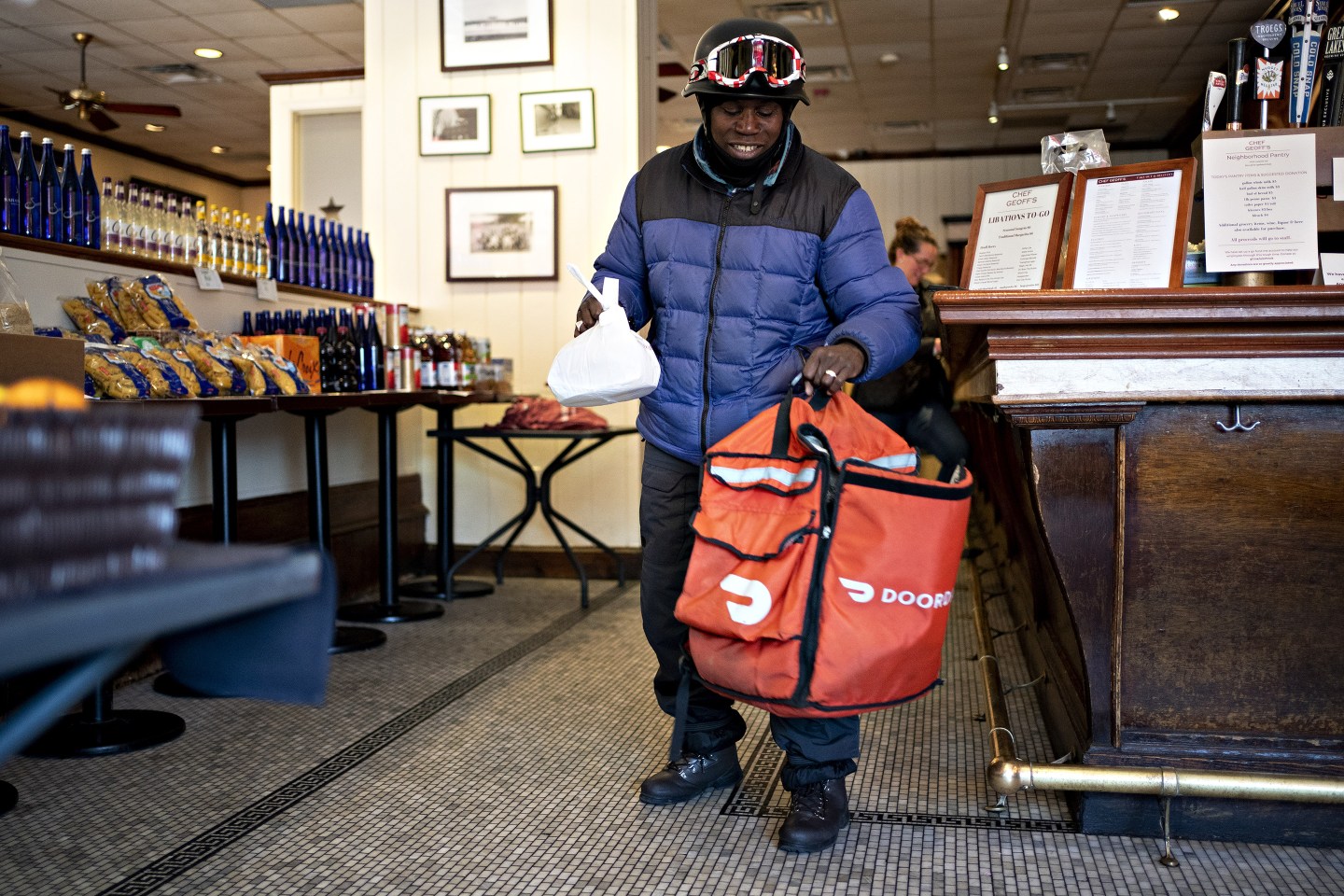 A DoorDash delivery person places an order into an insulated bag at Chef Geoff’s restaurant in Washington, D.C., on March 26, 2020.
Andrew Harrer—Bloomberg/Getty Images

DoorDash, the largest U.S. food delivery startup, published its long-awaited initial public offering prospectus on Friday, showing that it continues to lose money even as the COVID-19 pandemic rages and has multiplied its sales threefold this year.

The company’s S-1 filing with the U.S. Securities and Exchange Commission revealed that in the first three quarters of 2020, DoorDash revenue more than tripled, to $1.92 billion, from the same period last year, yet the company reported a net loss of $149 million, admittedly much smaller than last year’s. On a quarterly basis, DoorDash eked out a $23 million profit in the three months ended in June, a period that saw U.S. lockdowns at their strictest and most widespread, before returning to losses.

And that has raised questions about whether DoorDash—a company that connects restaurants, drivers (or cyclists), and consumers—or its “gig economy peers” can be profitable, even with the unexpected help of a pandemic that has led large numbers of Americans to avoid eating in restaurants and shift spending to food delivery (rather than, say, travel).

DoorDash, valued at $16 billion in a funding round in June, itself raised the specter that the COVID-19 boom for sales will wane. “The circumstances that have accelerated the growth of our business stemming from the effects of the COVID-19 pandemic may not continue in the future,” it wrote in the prospectus, noting that the pace of revenue and total order volume would likely decline.

Still, the company and its investors, which include SoftBank and Sequoia, were likely tempted by the red-hot stock market and by the surge in rival Grubhub’s shares (up 49% this year).

DoorDash also made clear in its prospectus that it sees restaurant delivery as only the foundation of its hoped-for empire. “We believe the network we have built ideally positions us to fulfill our vision of empowering all local businesses to compete in the convenience economy,” Tony Xu, CEO and cofounder, wrote in a letter to prospective investors that started on a personal note with a reference to his mother.

DoorDash had already signaled those intentions last month when it announced a plan to offer same-day delivery of medication to customers of Walmart Inc.’s Sam’s Club business and over the summer when it disclosed a delivery program with Walgreens.

Despite the ongoing financial losses, there were encouraging trends for DoorDash’s business. In its investor presentation, DoorDash said it commanded a 50% share of the food delivery market, besting rivals UberEats, Postmates, and Grubhub, among others.

What’s more, DoorDash is now generating more cash than it is using, taking in $315 million in the first nine months of 2020, while burning through $308 million in the same period last year. And the company has 18 million regular customers.

Earlier this month, voters in California approved a ballot initiative, financed by DoorDash and other gig economy giants like Lyft and Uber, that will shield those companies from a new law in the country’s largest state that would have treated their drivers as employees eligible for a slew of benefits rather than as independent contractors.

DoorDash plans to list its shares on the New York Stock Exchange under the ticker DASH.