To honor veterans and make the country stronger, expand the JROTC 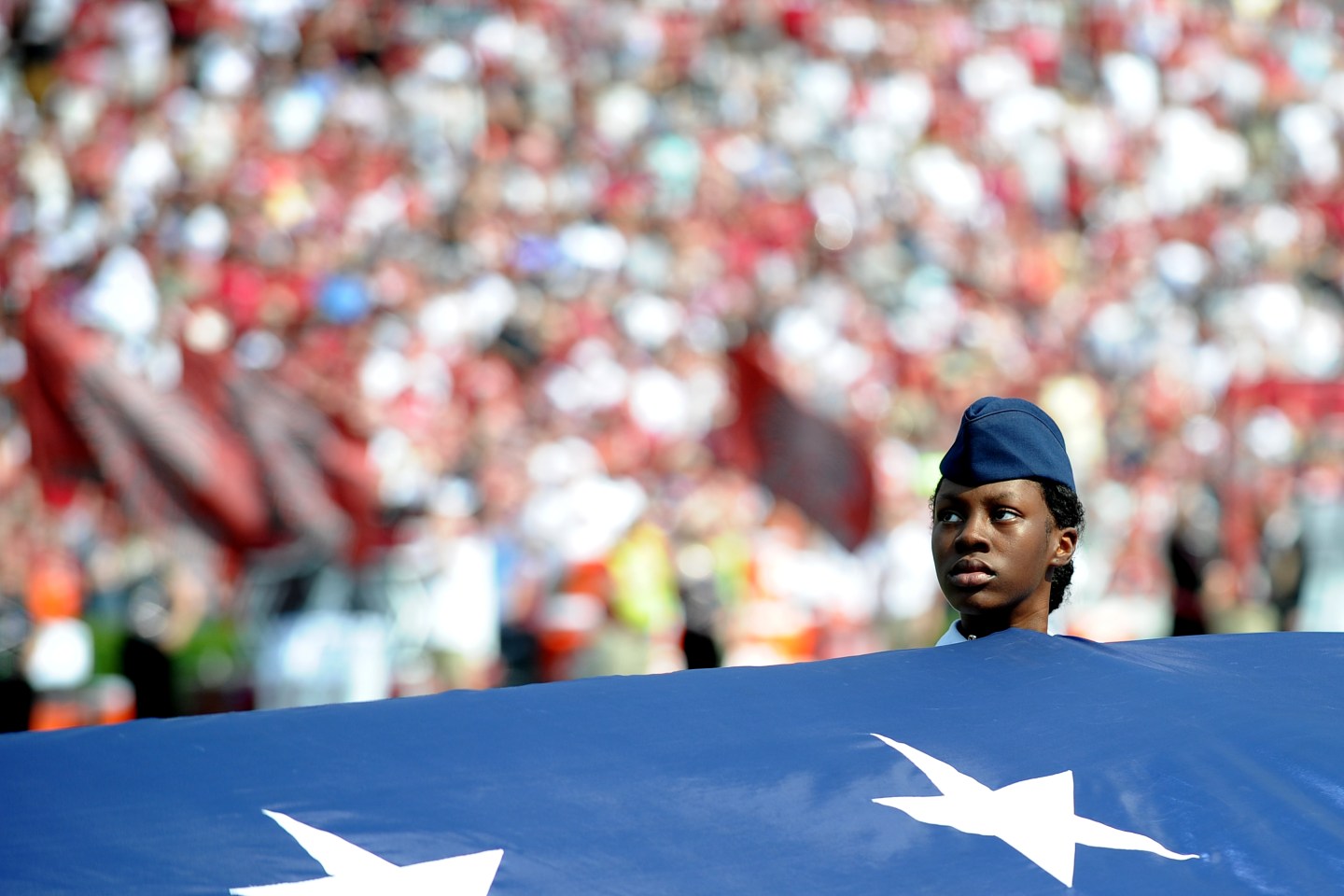 JROTC and similar programs, the authors write, “are promising means to empower young Americans with strong civic education and a commitment to serve others, in or out of uniform.”
(Photo by Dannie Walls/Icon Sportswire via Getty Images)

We are four veterans—one Navy helicopter pilot who flew missions throughout Europe and the Middle East, and three Marines who served in the same unit during the wars in Iraq and Afghanistan. This Veterans Day, after another bitter election, we need to focus on uniting our country and re-instilling a sense of duty that transcends petty partisanship. That is why we are now working together to improve and expand opportunities for more Americans to serve their country—in or out of uniform.

One of the most promising service programs for young Americans is the U.S. Armed Services Junior Reserve Officers’ Training Corps, or JROTC. We are working on a plan before Congress today that would double the size of the program nationwide and equip the next generation to lead through civic duty.

Among its other effects, the coronavirus pandemic has eroded the quality of education across the country, especially in disadvantaged rural and urban communities, where young people long for purpose-driven futures. JROTC and similar programs like the Young Marines are promising means to empower young Americans with strong civic education and a commitment to serve others, in or out of uniform.

Established in 1916 at the eve of America’s entrance into World War I, JROTC’s mission is to instill in students “the values of citizenship, service to the United States, and personal responsibility and a sense of accomplishment.” There are more than 3,000 JROTC programs in operation in high schools across all 50 states and overseas, serving an estimated 500,000 eighth- to 12th-grade students.

One of us has seen the impact of junior military programs firsthand. After retiring from 24 years as a Marine Explosive Ordnance Disposal (EOD) technician and, later, a Human Intelligence officer, Mike Dubrule took over and led a Young Marines unit in Venice, Fla., from 2013–2019. In those years, Dubrule led cadets with the same passion for country and sense of service that he used when leading troops in Iraq. As Dubrule explains, JROTC and similar efforts are often a place for adolescents to “find their voice” during the defining and sometimes turbulent years of early adulthood.

Dubrule recalls the journey of a young woman who emigrated from Thailand. Struggling to find a community in high school, she was so bashful that she totally avoided speaking in public environments. Her parents, who supported their family by working at a local restaurant, encouraged her to join Dubrule’s unit. She found her voice and rose to become the unit’s student commander. On a trip to Pearl Harbor to mark the 75th anniversary of the attack, she took command of her unit and several other units from across the country and conducted a parade formation with the full confidence of every peer she led. She is now attending university and aspires to be a medical doctor. “She is the living embodiment of the promise of the United States,” Dubrule reflected.

Transformative stories occur every year across the country in JROTC units. According to the Rand Corporation, students who participate in JROTC see “improved academic and behavioral outcomes.” These results include higher grade-point averages, higher graduation rates, higher college acceptance rates, higher standardized test scores, and increased community service participation. The inherent cost to each school is relatively small, as the respective military service subsidizes most costs like textbooks, uniforms, and equipment among other material, but there is a waitlist of hundreds of high schools requesting a JROTC unit.

Congress could act now to bring JROTC to thousands of additional students around the country. Funding for JROTC programs is approved every year in the National Defense Authorization Act. Two of us, Rep. Mike Gallagher and Rep. Mikie Sherrill, are members of the congressional bipartisan For Country Caucus. They’re working with their military veteran colleagues and Rye Barcott’s With Honor Action, a nonprofit policy organization, to build consensus around two new provisions in the defense bill that would strengthen and expand the JROTC program across the nation. One provision will expand JROTC and implement a plan to establish at least 6,000 units, doubling the current corps, by 2031, while the other provision will integrate more STEM education to make the curriculum applicable and competitive.

“We experienced war together,” Dubrule says of his relationship with Rep. Gallagher and Barcott, who both served under his command. “Each of us is now settled down in our separate corners of America, but the belief we share in our nation binds us forever. I did not think I would ever establish bonds built on community, trust, and love like that until I was introduced to the cadets at that school in Venice, Florida.”

The year is about to end, and these provisions can help begin the long path of healing our country and equip the next generation of young Americans. We can take a large step forward with these provisions to double JROTC and enhance its curriculum in the next National Defense Authorization Act. Please join us this Veterans Day in calling on your elected officials to support it.