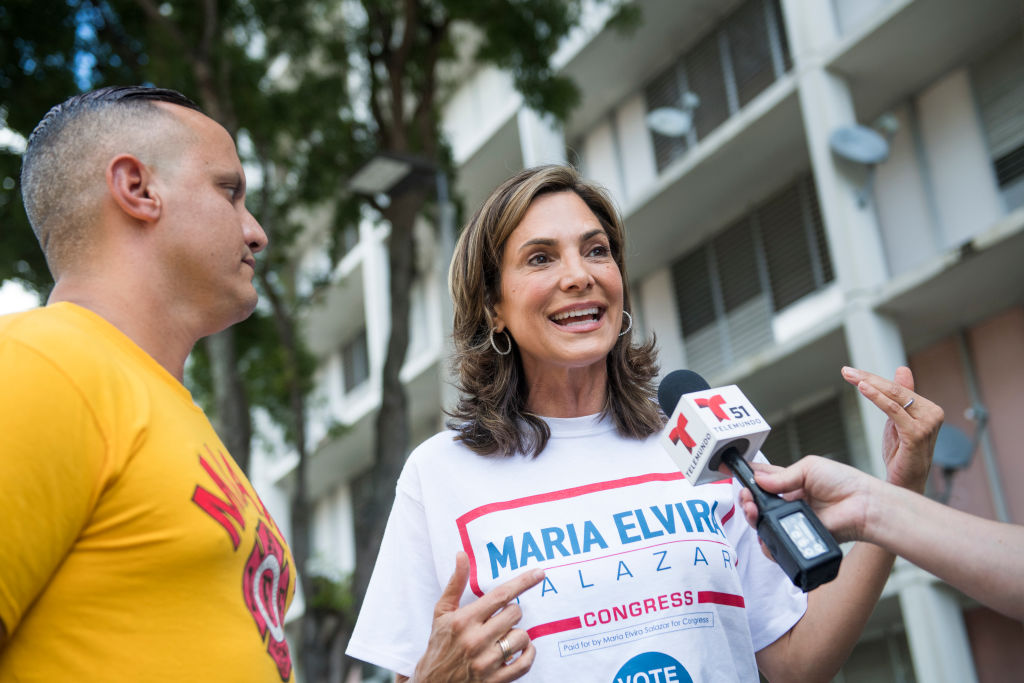 Maria Elvira Salazar is seen here in Miami in November 2018. Salazar is one of several female Republicans to have clinched Congressional seats in the 2020 election cycle.
Tom Williams/CQ Roll Call

– Another ‘Year of the Woman.’ The 2018 midterm election was dubbed the ‘Year of the Woman,’ especially in Congress, with voters electing 102 women to the House and 14 to the Senate. But that title came with an important caveat: it really only applied to Democrats. Of the women elected to Congress, 89 of the representatives were Democrats, as were 11 of the senators.

In 2020, the reverse is true. As results continue to trickle in, it’s clear that this year was another big one for women—but mainly for Republicans.

As of last night, 23 female Republicans had won House seats, setting GOP women up to surpass their previous record of 25. In the Senate, Republicans Joni Ernst (Iowa) and Susan Collins (Maine) held off serious challenges to their seats, and Kelly Loeffler (Ga.) beat out another Republican, Doug Collins, to advance to a January runoff for the seat she was appointed to earlier this year. Cynthia Lummis, meanwhile, is a newcomer; she’ll be the first Republican woman to represent Wyoming in the Senate.

So far, the number of female Republicans who will serve in the next Congress—31—surpasses the previous high of 30, set in 2006. Female Democrats’ tally is at 96, which represents a loss of nine seats.

The Republican wins cut into Democrats’ advantage in electing women to federal office and they make good on the GOP’s 2018 vow to chip away at its own enormous gender gap in Congress. Republicans made progress by seeking to recruit and nominate candidates who are more diverse and have less traditional backgrounds, the same strategy Democrats employed for the 2018 midterms.

Americans will—of course!—filter the 2020 results through a partisan lens, but at the very least, the gains among Republican women mirror a trend we’re seeing across the U.S., from Congress to the C-Suite; that the definition of who’s ready to assume positions of power—a standard that long disadvantaged women—is finally shifting.

- Ballot questions, answered. Colorado voters approved a plan to create a paid family leave program for the state. Starting in 2024, workers could receive up to $1,100 a week for paid family or medical leave. The state's voters also rejected a 22-week abortion ban. (Louisiana voters, however, approved a state constitutional amendment specifying that "abortion is not a protected right.")

- News from New Mexico. New Mexico's new House delegation is historic: all three representatives from the state will be women of color. Rep. Deb Haaland won reelection; Republican Yvette Herrell and Democrat Teresa Leger won their races to join Haaland in Congress. That delegation also contributes to a record six Native Americans who will serve in Congress—three men and three women.

- Crypto in Congress. Republican Cynthia Lummis's Senate victory in Wyoming is notable for an unusual reason: Lummis will be the first member of the Senate who owns cryptocurrency. That personal ownership could influence her lawmaking on the issue. Fortune

- Working women. Florida's vote to raise the minimum wage to $15 will have meaningful consequences for the two-thirds of minimum-wage workers who are women. The state is now set to reach a $15 wage by 2026. Fortune

- Open by Christmas? As European countries begin new lockdowns, Chancellor Angela Merkel is telling Germany that the country could defeat this wave of the coronavirus within the month of November. "It is up to everyone to make this November a success, a turning point," she says. "If we succeed, then we can have a bearable December with more freedom." Politico

- Pregnancy risk. Pregnancy is now officially a condition that puts someone who contracts the coronavirus at risk of becoming severely ill. U.S. officials added pregnancy to a list of conditions earlier this week based on a new study that compared symptomatic pregnant women with symptomatic non-pregnant women. New York Times

- Hunters and gatherers. Is it true that men were always the hunters and women always the gatherers? A new discovery of a 9,000-year-old female skeleton in Peru, buried with a "big-game hunting kit," challenges that belief. New York Times

Tara McGowan will get inside your head Marie Claire

"We broke a 120-year record on turnout—the kind of turnout people only dreamed of."

-Political scientist Julia Azari of Marquette University on the record number of people who voted in this year's U.S. election.