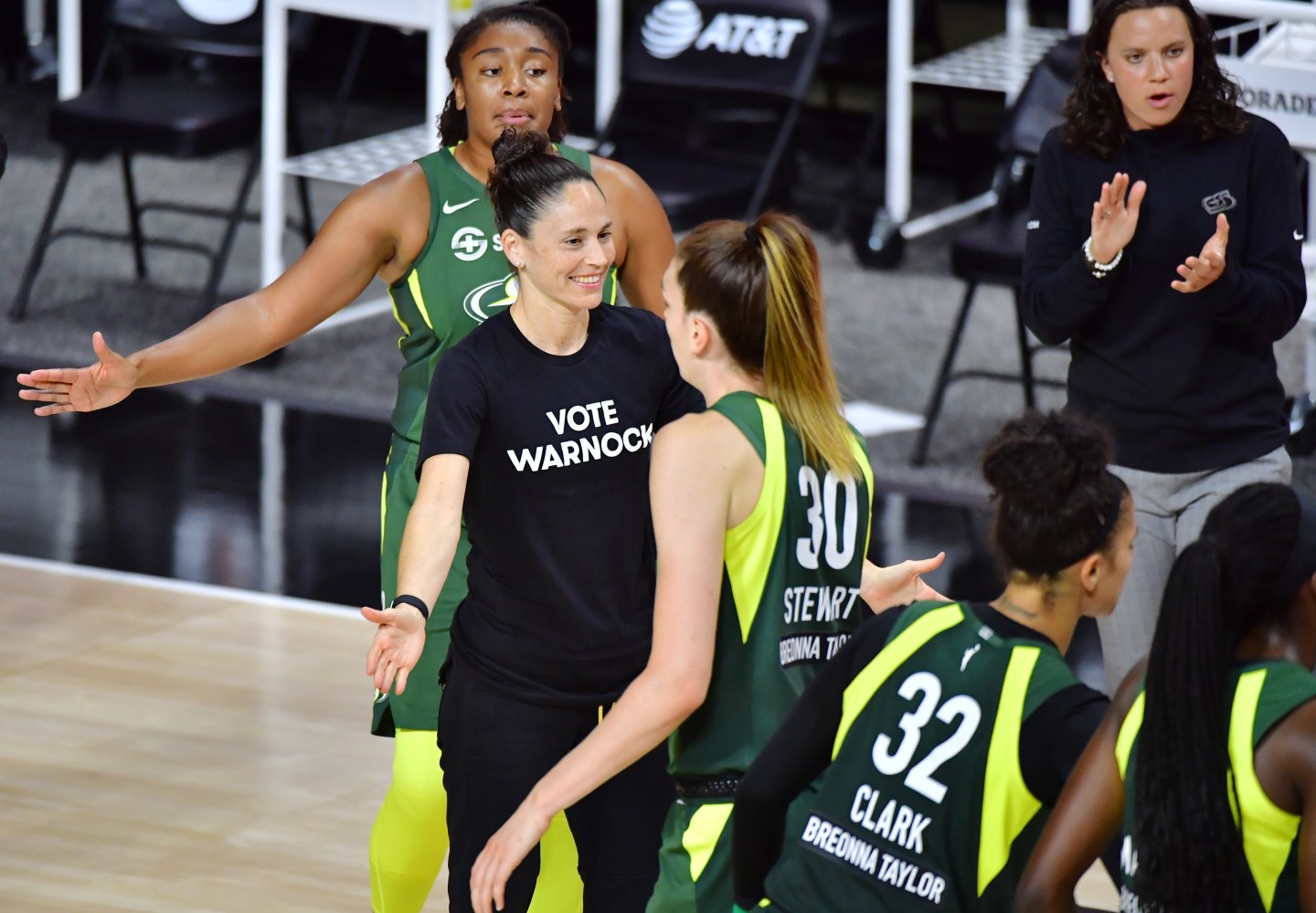 Sue Bird #10 of the Seattle Storm low fives Breanna Stewart #30 while wearing a Vote Warnock T-shirt during the second half of a game against the Connecticut Sun at Feld Entertainment Center on August 04, 2020 in Palmetto, Florida. NOTE TO USER: User expressly acknowledges and agrees that, by downloading and or using this photograph, User is consenting to the terms and conditions of the Getty Images License Agreement. (Photo by Julio Aguilar/Getty Images)
Getty Images

Good morning, Broadsheet readers! Kayleigh McEnany tests positive, all eyes are on the VP debate, and why the WNBA won’t say her name. Have a healthy Tuesday.

– She who must not be named. While most of the U.S.’s attention is, understandably, focused on presidential politics, I was interested to see that the New York Times yesterday ran a pair of stories focused on a certain female member of Congress.

If I were a WNBA player, I wouldn’t get any more specific than that. While I am a fan, I haven’t dribbled a basketball since junior high, so I’ll spell it out: Georgia Sen. Kelly Loeffler.

The first NYT story digs into how Loeffler—who is perhaps best known for making some very profitable stock trades soon after senators received a private briefing on COVID-19—went from “from political moderate to ‘more conservative than Attila the Hun.'” It’s an object lesson in how the GOP has moved Trump-ward in an attempt to appeal to—or at least to avoid punishment by—the President’s base. (Loeffler, who was appointed to her seat, is running in a special election in November.)

The second piece offers a very different type of lesson. In addition to serving in Congress, Loeffler is the co-owner of WNBA team the Atlanta Dream. The league, as we’ve covered before, has been at the forefront of the push for racial justice in America. Meanwhile, Loeffler has called Black Lives Matter a “dangerous Marxist movement” and falsely claimed that it has “promoted violence and destruction across the country.”

But rather than respond directly—engaging in the type of high-profile back-and-forth that might rile up the voters Loeffler is trying to court—the WNBA players have publicly engaged with political figures like Michelle Obama and Stacey Abrams, moved en masse to support Loeffler’s opponent, and, perhaps most potently, declined to use the senator’s name.

At a time when so much of our political and social discourse revolves around bad faith arguments and name calling, the players decision to choose silence—and action!—could not speak more loudly.

“Words have power,” Nneka Ogwumike, Los Angeles Sparks forward and president of the league’s players’ association, told the NYT. “And to give energy to a name I think is very meaningful. So, we stopped saying that name.”

- Trending positive. The latest senior White House staffer to test positive for COVID-19 is Kayleigh McEnany. The press secretary held briefings with reporters where she did not wear a mask as recently as Sunday evening, before her positive test Monday morning. CNN

- Debate prep. All eyes are on the vice presidential debate now that President Trump is sidelined—to a degree—by his COVID-19 diagnosis. The debate is set to move forward Wednesday night, with plexiglass separating Sen. Kamala Harris (who is profiled by Elle today) from Vice President Mike Pence. In other prep, Harris's team is reading gender studies literature to study up on how the senator could be perceived as a female candidate onstage.

- Real resale. The RealReal, led by CEO Julie Wainwright, struck a deal with Gucci allowing the luxury brand to sell its own consignment offerings directly on the resale platform. The two brands are billing the partnership as inspired by sustainability. Vogue

- Beauty maven. Unilever's Esi Eggleston Bracey created Febreze, revamped CoverGirl and now oversees Dove and Suave. In this interview, the head of beauty and personal care for Unilever North America shares her career trajectory—including which mentors and boosters were crucial to her success. Wall Street Journal

- Inside D&I. Julia Taylor Kennedy and Pooja Jain-Link of the diversity, equity, and inclusion think tank Coqual argue in this Fortune op-ed that the fact that deep involvement in corporate diversity and inclusion initiatives is so often optional for both employees and executives hurts progress on the issues. Companies, they say, must shift D&I from the periphery of their work to the core. Fortune

- Baby pay. Singapore is offering would-be parents a one-time payment to ease the financial burden of having a baby in the pandemic. “COVID-19 has caused some aspiring parents to postpone their parenthood plans,” Deputy Prime Minister Heng Swee Keat said Monday. “To help with expenses during this period, we will introduce a one-off additional support for newborns.” Bloomberg

The Zoom effect: Why plastic surgery and cosmetic procedures might be more popular because of the pandemic Fortune