The biggest takeaway from the New York Times tax exposé? Trump is a lousy businessman. 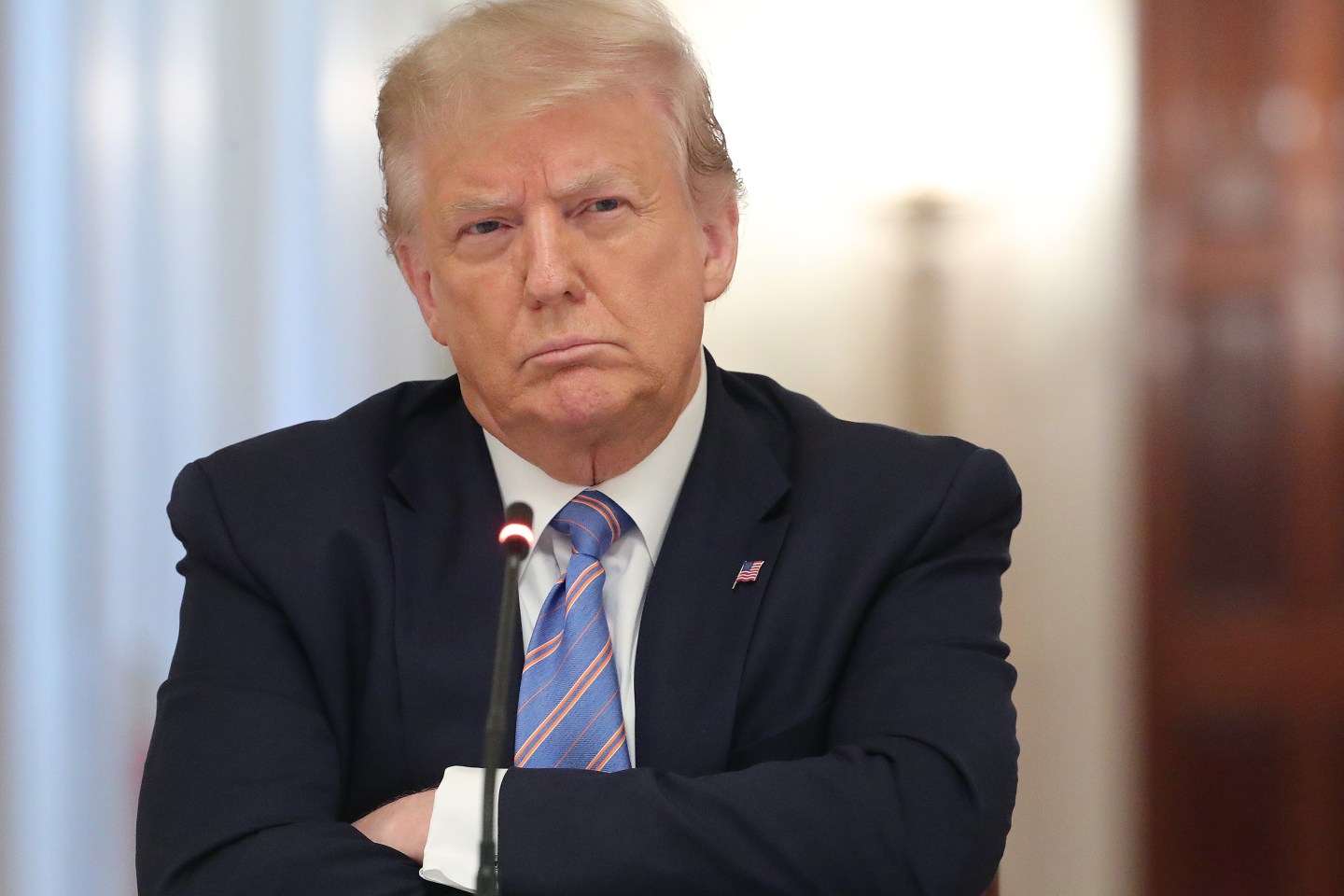 WASHINGTON, DC - JULY 07: U.S. President Donald Trump participates in an event with students, teachers and administrators about how to safely re-open schools during the novel coronavirus pandemic in the East Room at the White House July 07, 2020 in Washington, DC. As the number of COVID-19 cases surge across southern states like Florida, Texas, Louisiana, South Carolina and Arizona, Trump joined with guests from across the country to discuss how to responsibly return to the classroom. (Photo by Chip Somodevilla/Getty Images)
Chip Somodevilla—Getty Images

The New York Times’s blockbuster report on President Trump’s taxes, published Sunday evening, offers no shortage of revelations: Trump, according to the Times, paid just $750 in federal income tax in 2016, the year he was elected President—and paid the same paltry sum in 2017, his first year in the White House. In the decade and a half leading up to then, the New York real estate mogul, who boasted endlessly of his wealth and deal-making prowess, incurred so many millions of dollars in personal losses—as per his own sworn declarations to the IRS—that he “owed” nothing in income taxes in 10 of those years. He reportedly paid nothing, too.

A lawyer for the Trump Organization told the Times that its reporters’ claims “appear to be inaccurate” and asserted that “over the past decade, President Trump has paid tens of millions of dollars in personal taxes to the federal government.” The President, for his part, called the newspaper’s report “FAKE NEWS.”

The Times, which said it verified its account with both publicly available and confidential sources, noted that all of the President’s tax data “was provided by sources with legal access to it.”

“Most of Mr. Trump’s core enterprises—from his constellation of golf courses to his conservative-magnet hotel in Washington—report losing millions, if not tens of millions, of dollars year after year,” said the newspaper’s Russ Buettner, Susanne Craig and Mike McIntire. Mr. Trump’s “revenue from ‘The Apprentice’ and from licensing deals is drying up, and several years ago he sold nearly all the stocks that now might have helped him plug holes in his struggling properties.”

Indeed, it would appear he is personally on the hook for $421 million in IOUs, with most of that coming due over the next four years, said the Times’s reporters. All of which means: “Should he win re-election, his lenders could be placed in the unprecedented position of weighing whether to foreclose on a sitting president.”

Yes, there are plenty of eye-poppers in the Times’s reportage—including, for instance, that Mr. Trump seems to have claimed more than $70,000 in “business expenses” for hair styling during his stint on “The Apprentice” television show. But perhaps the most salient takeaway is simply this: If Mr. Trump’s own declarations to the IRS are to be believed, then he isn’t much of a businessman.

That revelation, of course, isn’t new at all. In fact, two classic Fortune stories, written a generation ago, memorably captured this awkward incongruence in Mr. Trump’s public persona, long before his run for the White House.

In “What Does Donald Trump Really Want?,” writer Jerry Useem took readers into a frenzied three-ring circus of bombast and leverage—where, somehow, even a thriving Atlantic City casino business could be nearly drowning in debt. When Useem’s story was published in the April 3, 2000 edition of Fortune, Trump’s casino company was awash in $1.8 billion in high-yield debt—the servicing of which gobbled up $216 million of cash flow. In a business where “the house always wins,” Trump’s casino company lost $134 million in 1999 (after special items and depreciation—a theme in the New York Times’ story, too), forcing S&P to lower it bond rating “from junk to junkier,” said Useem, who is now a contributing writer at The Atlantic.

“But most disquieting,” wrote Useem—in a magazine yarn that feels like it was written two days, not two decades, ago—was “Trump’s tendency to use the casino company as his own personal piggy bank. It’s not just the $5 million bonus he drew one year, or the fact that the pilots of his personal 727 are on the casino company’s payroll…[or that] he had the already cash-strapped company lend him $26 million to pay off a personal loan from Donaldson Lufkin & Jenrette.”

Trump denied furiously to Fortune then that he did anything amiss and dutifully swore to pay off his debts. But many of those who knew him well had their doubts. “A couple of people close to Trump and otherwise sympathetic to him suggested to me that he’s unfit to be running a public company,” wrote Useem in 2000. “Given that the low stock price seems partly a function of Wall Street’s allergic response to Trump’s flamboyance—analysts call it ‘the Donald factor’—the obvious solution would be for Trump to remove himself from management. One industry executive estimates that step alone would bring a 30% bump in the stock.”

Yet even more striking than the eternal unsteadiness of his business dealings was Trump’s eternal fear of being seen as an unsteady businessman. During one of Trump’s telephone conversations with Useem, the developer said he’d “sue the ass off of Fortune” if the magazine was to “disparage [his] cash flow.”

Four years later, writer Daniel Roth revisited this image obsession in his marvelous profile, “The Trophy Life,” which graced the cover of Fortune’s April 19, 2004 edition. Trump—the son of a bonafide New York real estate mogul—“funded a world of buildings, hotels, and casinos, a USFL football team (helmed by Doug Flutie), a 284-foot yacht (helmed on the comic pages by Doonesbury character Duke), and an airline, mainly by charming banks into huge mortgages—even persuading them to lend him money for his equity stake, backed only by personal guarantees,” wrote Roth.

“When the early 1990s recession hit, Trump began to default on his loans and found himself with nearly $1 billion in debt that he personally had guaranteed. He worked out a deal with the banks to sell his properties and get them some of their money back. In return, they spared him from having to declare personal bankruptcy. Reports at the time said the banks granted Trump a $450,000 monthly allowance. He denies it. ‘Honestly, wouldn’t that be terrible PR for the banks?’ Trump says.”

Was the developer worth the billions of dollars he said he was? Or a fraction of that? Fortune’s attempt to dig into Trumpian finances “yielded only murk,” wrote Roth. “All his deals are buried in layers of corporate names, partners, and either debt or no debt, depending on whether you’re talking to Trump.”

Recalling the story 13 years later, Roth, who is now Executive Editor at LinkedIn, told Recode’s Peter Kafka, that Trump “was very focused on this idea that I would realize that he was successful as a business person.” In 2004, when Roth wrote his story “The Apprentice” had become the biggest show in America. “And here was this guy who was incredibly successful, clearly very successful, and he went out of his way to try to make sure that I, the reporter, realized he was successful. Showing me clip after clip of articles written about his golf courses.”

“I had never had an experience,” said Roth, “where someone had tried so baldly to let me know that they were important and other people thought they were successful.”

Read both of these Fortune classics here: