One pandemic, two recoveries: New Yorkers are three times more likely to be jobless than Nebraskans 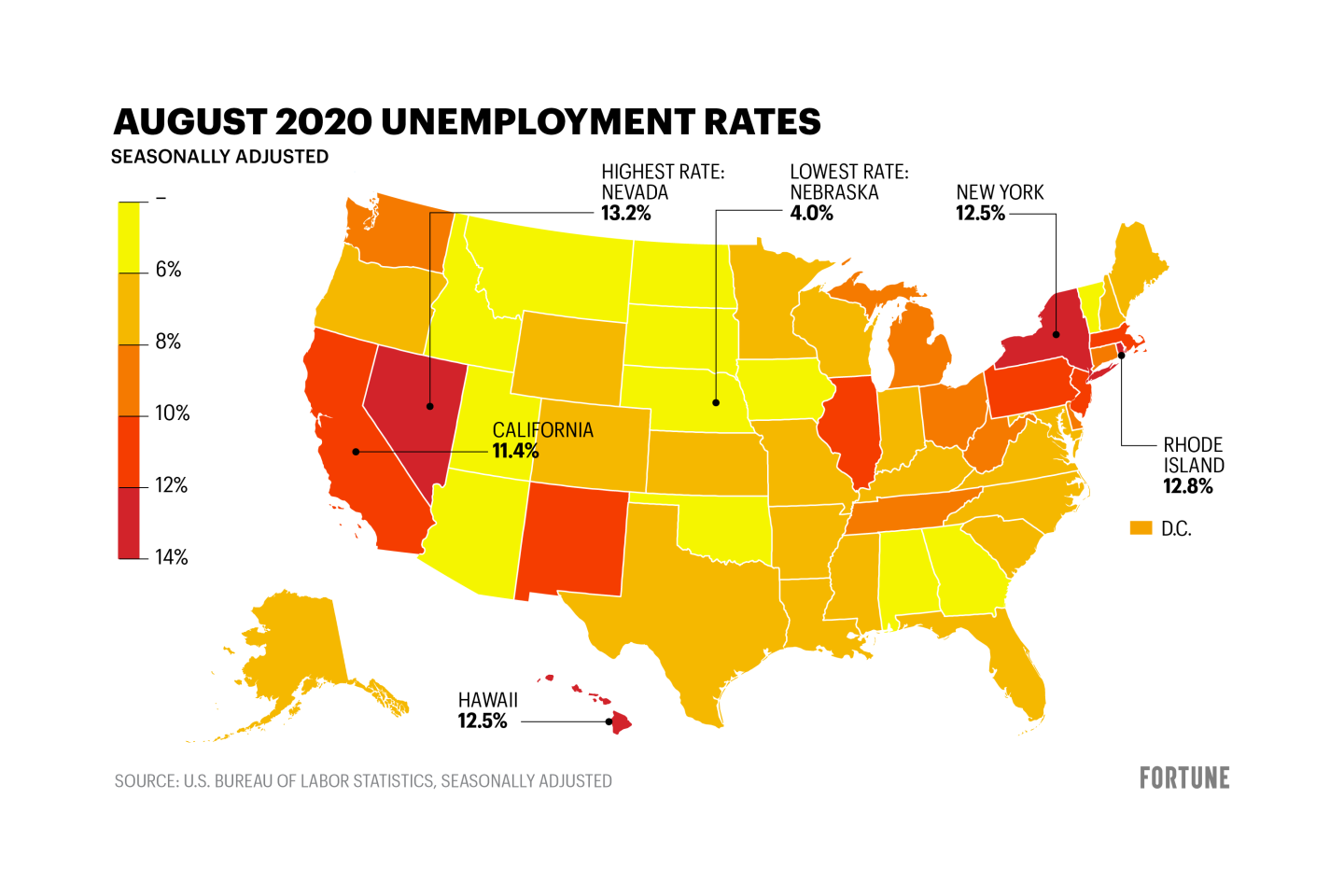 It’s going to take a long time to get out of this economic mess, but we’re making progress: Since the end of April, the economy has added more than 10 million jobs and the unemployment rate has fallen from its peak of 14.7% to 8.4%.

But that national recovery is unequal. Employment in some states is back to pre-pandemic levels, while others are at mass joblessness levels surpassing the 2007-09 Great Recession.

When the pandemic hit, the jobless rate in Nebraska soared from 4% in March to 8.7% in April. But the state’s nearly fully reopened economy has helped push the jobless rate back to 4% as of August.

The picture in New York, the epicenter of the pandemic in the spring, is far less rosy. It saw its jobless rate climb from 4.1% in March to a staggering 15.3% by April. It has since improved to 12.5% in August—a figure that is still above the U.S. peak of 8.9% jobless rate during the Great Recession era.

How can a New Yorker be three times more likely to be jobless than a Nebraskan?

States like Nebraska that are more rural and haven’t been as hard hit by the pandemic have almost fully reopened. Earlier this month Nebraska allowed outdoor gatherings to reopen at 100%, including sports stadiums and fairgrounds. And places like bars and tattoo parlors were reopened weeks ago.

Northeast states like New Jersey, New York, and Connecticut were hit hard by the virus in the spring and are reopening businesses at much slower rates. Case in point: Indoor dinning in New York City doesn’t start back until September 30, and that’s only at 25% capacity. That cautious approach explains why New York’s jobless rate remains so high.

While New York leads the nation at 33,092 lives lost to the pandemic, its case load and deaths are plummeting, according to Johns Hopkins University data. Only .9% of COVID-19 tests in New York are coming back positive compared to over 50% at one point in April. Nebraska has far fewer COVID-19 deaths (452), however, its positive rate is 12.6%—which is above the 10% threshold that adds incoming travelers to New York’s 14-day quarantine.

And joblessness in New York is also elevated by its large leisure and hospitality concentration. That sector was smashed by the pandemic, and has yet to rebound. Leisure and hospitality jobs in New York City alone are still down 48%. And that’s also why joblessness is still so high in tourism heavy California (11.4%), Hawaii (12.5%), and Nevada (13.2%).

While Florida also has a massive tourism industry, its jobless rate is only 7.4% in August which can be chalked up to a more aggressive reopening plan than states like Nevada or New York.