Kenosha’s unusual economic evolution made it the perfect political flashpoint 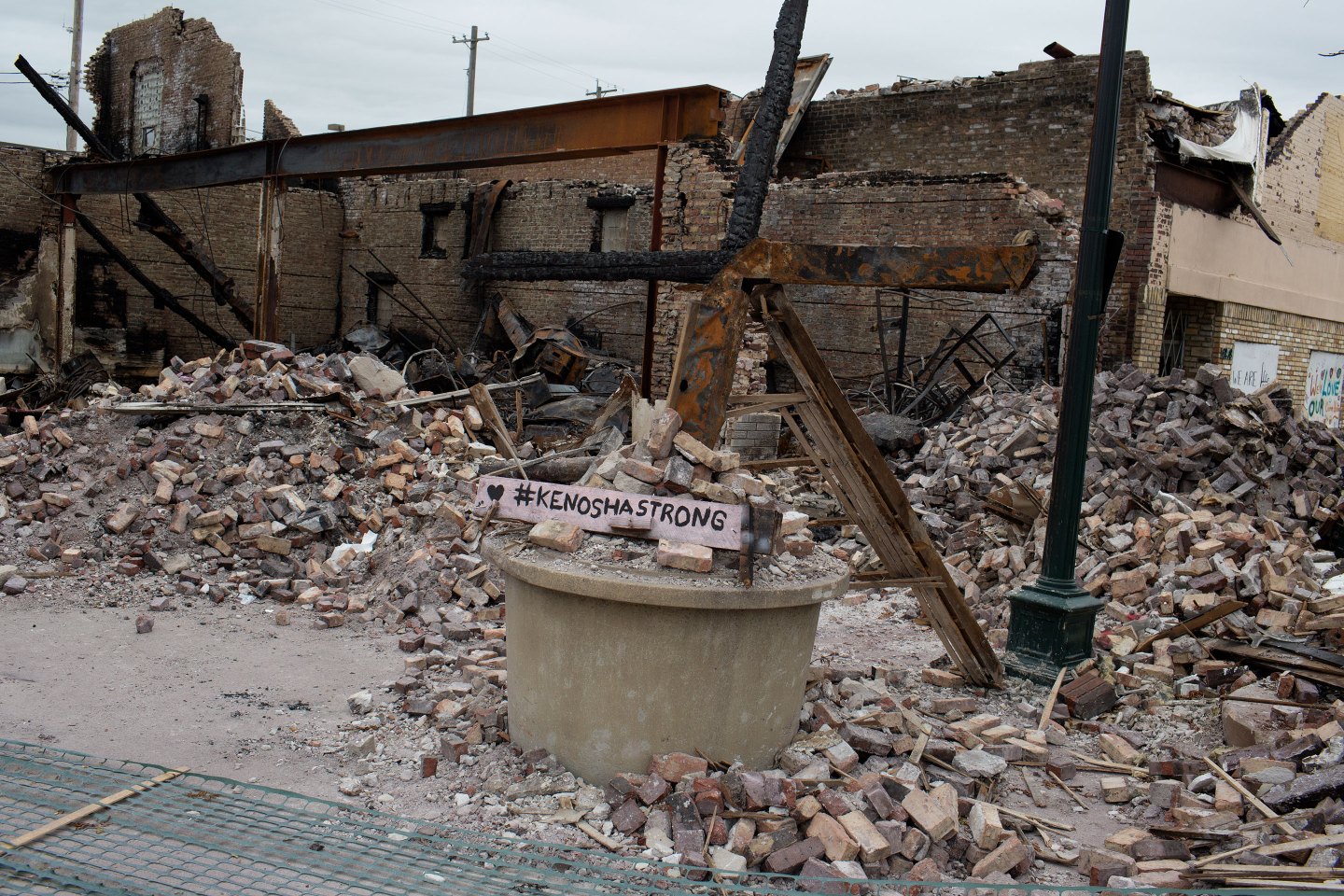 A section of the Uptown neighborhood remains in ruins after last week's rioting, on September 1, 2020, in Kenosha, Wisconsin. President Trump came to tour sections of the town burned down from rioting over a police officer's shooting of local resident Jacob Blake, and to thank the police. (Photo by Andrew Lichtenstein/Corbis via Getty Images)
Andrew Lichtenstein—Corbis via Getty Images

In the span of less than two weeks, the city of Kenosha, Wis., has gone from an unassuming bedroom community nestled on the shores of Lake Michigan, into a flashpoint for the social and political fault lines that have flared up during this most fraught of election years.

The shooting of Jacob Blake, a 29-year-old Black man, by a police officer in Kenosha on August 23 has reignited the tensions that sparked a national protest movement after the killing of George Floyd by a police officer in Minneapolis earlier this year. Thousands of protesters have taken to Kenosha’s streets over the past two weeks, raising their voices against police violence that disproportionately affects communities of color. The demonstrations have also devolved in arson, looting, and property destruction, as well as violence that has left multiple people dead.

But though Kenosha has been in the news daily as of late, many may be unfamiliar with the city’s former status as a hotbed of American industrial activity—and its gradual transition into a hub for the services-based economy of today.

Police prepare for President Donald Trump’s visit on September 1, 2020 in Kenosha, Wis. Kenosha is recovering from several days of unrest and demonstrations following the shooting of Jacob Blake. Blake was shot seven times in the back on August 23 in front of his three children by a police officer in Kenosha.
Scott Olson—Getty Images

Located roughly 30 miles south of Milwaukee and 50 miles north of Chicago, Kenosha was once home to a sprawling automobile plant run by the old American Motors Corporation. For most of the 20th century, AMC produced millions of vehicles in Kenosha, with iconic cars like the Rambler American and AMC Pacer having rolled off of its vast lakefront facility.

But by the 1980s, Kenosha’s automaking prospects—like those of the American auto industry at large—had taken a turn for the worse. Chrysler, led by CEO Lee Ioccoca, bought out AMC in 1987, and by the end of the following year it had shuttered the Kenosha plant, ending a nearly 90-year tradition of automobile assembly in the city. Chrysler continued to produce engines in Kenosha until 2010, when it became a casualty of the company’s bankruptcy.

Volunteers paint murals on boarded-up businesses in Kenosha, Wis., on Aug. 30, 2020, at an “Uptown Revival.” The event was meant to gather donations for Kenosha residents and help businesses hurt by violent protests that sparked fires across the city following the police shooting of Jacob Blake.
Russell Contreras—AP

The death of Kenosha’s automobile industry cost tens of thousands of people their jobs, and turned the city into a casualty of the downfall of American manufacturing. What was once the lifeblood of the local economy—well-paying union jobs that allowed tens of thousands of households to own their own homes, save for retirement, and pursue their American dream—had been stripped away. Like many former industrial hotspots across the country, Kenosha would have to evolve to cope with the realities of a 21st century economy, or else rust away.

In many respects, Kenosha has managed to do just that—making it a relative success story in a nation where so many formerly auto-dependent Midwestern economies have faded into obscurity. It has capitalized on its position between two major metropolitan areas and grown into a bedroom community of 100,000 residents, many of whom (before the coronavirus pandemic, at least) shuttle daily to their jobs in and around Chicago or Milwaukee.

An employee pulls a cart stacked with boxes at the Amazon.com fulfillment center in Kenosha, Wis., on Aug. 1, 2017.
Jim Young—Bloomberg via Getty Images

Perhaps nothing exemplifies Kenosha’s adaptation to the demands of a modern economy than the huge distribution complex that Amazon opened on the outskirts of the city in 2015. Aided by up to $10 million in tax credits from the Wisconsin Economic Development Corporation, the e-commerce giant developed a 1-million-square-foot fulfillment center and adjacent 500,000-square-foot sortation center—a project that has created more than 1,000 new jobs in Kenosha.

Amazon’s decision to set up shop in Kenosha was undoubtedly motivated by its proximity to the bustling Milwaukee and Chicago markets to the north and south, respectively. (The company is set to open an even larger fulfillment center 20 miles north in Oak Creek, located just outside Milwaukee). As online retail and commerce has grown, so has the market for prime industrial property located near major cities, from which companies can distribute their products to customers in those population centers. (Private equity giant KKR paid $176 million earlier this year to acquire the Kenosha properties that are leased to Amazon, reportedly a record price for industrial real estate in the Chicago area.)

Jobseekers fill out forms on laptop computers during an Amazon.com job fair in Kenosha, Wis., in 2017.
Jim Young—Bloomberg via Getty Images

In many ways, the evolution of Kenosha’s economy has been that of the wider American economy over the past three decades; sprawling plants and factories have given way to sprawling distribution centers, while manufacturing jobs have given way to warehousing gigs. Kenosha has become a postertown of sorts for this dynamic; between the Amazon facility and that of shipping and packaging materials distributor Uline, Kenosha County has had one of the fastest-growing warehouse sectors in the U.S. in recent years.

While that’s helped offset some of the loss in manufacturing jobs, the warehousing sector in Kenosha still employs considerably fewer people than the tens of thousands who were once supported by the city’s manufacturing industry. What’s more, the quality of those jobs, in terms of compensation and benefits, are usually worse than what Kenosha’s factory workers—many of them unionized—used to earn. Few Amazon warehouse workers make more than $15 hourly minimum wage that the company committed to paying two years ago.

That, too, is reflective of the American economy’s transformation. The tens of millions who comprise the nation’s shrinking middle class are finding it ever harder to obtain, and maintain, well-paying jobs with the kinds of wages and benefits that would allow them to pursue their own American dreams. Such anxieties helped lure more than 1.4 million Wisconsinites to Donald Trump’s message of economic populism in 2016—the first time since 1984 that a Republican presidential candidate won the state.

This time, Trump and his Democratic opponent, Joe Biden, are using Kenosha as a political football of sorts—though one thrown across racial and cultural lines rather than economic ones. Both candidates visited the city this week: Trump took the opportunity to meet with law enforcement and throw his support behind the police, while Biden met with the Blake family and voiced his support for the protests while also condemning rioters.

Already so emblematic of the ruthless dynamics that have transformed the American economy, Kenosha now finds itself at the center of the racial and social tensions that have dominated the national conversation in 2020.