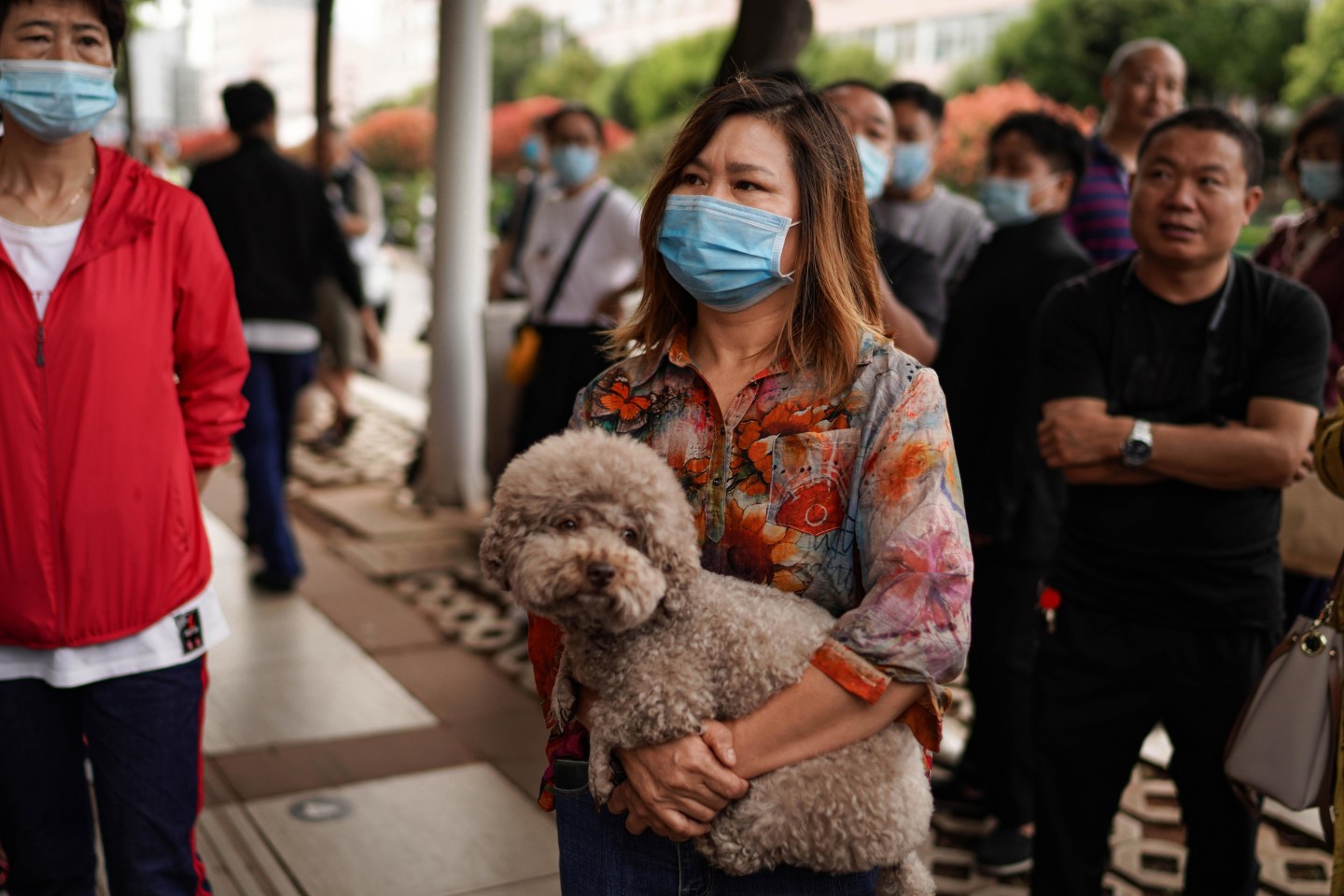 A woman carries her pet dog in Kunming, China, on July 7, 2020. We don't know much about zoonotic transmission of COVID-19 between humans and animals, but initial data has value, writes Carolyn Barber.
Kang Ping—China News Service/Getty Images

We think we know about the initial transmission of the coronavirus; it occurred at a live animal market in Wuhan, China, most likely from a bat to a person. In the time since, our attention has been understandably focused on the global human toll of this brutal disease, which already has reached a total of more than 25 million cases.

But how likely is it that, in addition to continually infecting each other, our human viral spread is also putting the animal world at risk? The answers to that question are emerging, and they carry implications both for endangered species and our own household pets.

Animals and humans have a long, common history when it comes to viruses. “Every year, tens of thousands of Americans get sick from diseases spread between animals and people,” said Casey Barton Behravesh, U.S. public health service director at the Centers for Disease Control and Prevention (CDC), in a statement posted to the organization’s website last year. The CDC says roughly 60% of human infectious diseases are zoonotic, meaning they’re transmitted by animals to people (or vice versa). Think of rabies, Lyme disease, West Nile virus, and MERS, among others.

But what about COVID-19? The short answer is that, although the numbers remain very low, human-to-animal transmission of the novel coronavirus has occurred. Depending upon what scale that ultimately achieves, it’s something worth watching closely.

We have very little prevalence data on animals. In a published preprint from Wuhan, researchers found that of more than 100 domestic and stray cats they tested, approximately 15% were positive for the coronavirus, but only rare cases of COVID-19 have been reported in domesticated cats, dogs, and other species in the U.S. The American Veterinary Medical Association website says that there’s little to no evidence that domestic animals are easily infected with the virus, and the Agriculture Department database reports that fewer than 40 animals so far have been confirmed COVID-positive by the National Veterinary Services Laboratories. (Barton Behravesh told me via email that infected animals “might or might not have any symptoms…and for this reason we don’t know for sure how many animals are infected in the U.S.”)

Two dogs in Hong Kong were among the first known cases to appear in canines. The first known human-to-cat transmission, meanwhile, occurred in Belgium in late March, where a sick owner’s cat developed typical coronavirus-like symptoms including diarrhea, vomiting, and breathing difficulties. The cat made a full recovery nine days later. In fact, Barton Behravesh told me, most of the animals diagnosed with COVID experienced only “mild illness and fully recovered.”

Since these initial cases, very rare reports of domesticated dogs and cats testing positive for coronavirus have appeared, and they appear to stem primarily from either symptomatic or asymptomatic pet owners transmitting the infection to their beloved felines and canines. Thankfully, there is little evidence of the reverse. The risk that petting or hugging your furry domestic companion might transmit the virus from the pet back to you, Barton Behravesh said, is considered low.

Big cats can get the coronavirus, too. As was widely publicized in April, New York’s Bronx Zoo found that five tigers and three African lions developed mild respiratory symptoms—and all tested positive for the virus, though each recovered without incident. Transmission was felt to have occurred from an asymptomatic but positive zookeeper “who was actively shedding virus,” according to the Agriculture Department. Barton Behravesh confirmed to me that no further outbreaks of the coronavirus at zoos in the U.S have been reported, though a single puma in South Africa was infected by its caretaker.

We’ve seen COVID-19 outbreaks in other animals, including on mink farms in Spain, Denmark, the Netherlands, and the U.S., where it’s believed that ill farm workers were responsible for the outbreaks. And while animal-to-human transmission is felt to be insignificant at this time, cases in the Netherlands hypothesize possible spread from minks to humans.

Certainly, we’re learning as we go. For example, research reported in Science magazine found that in the laboratory, the virus either did not replicate or did not spread easily in dogs, pigs, chickens, or ducks. Cats, meanwhile, appeared able to pass along the coronavirus much easier to one another than were dogs. And there’s an unpublished modeling study that shows apes and African and Asian monkeys are likely to be “highly susceptible” to COVID-19. (It is important to remember that experimental and modeling studies do not necessarily reflect how infection will occur under natural conditions. Animals may not be as easily infected in the real world—perhaps that’s part of the reason the numbers are so low.)

Still, history suggests we need to have our guard up, as the spread of viruses to other species previously has had devastating effects on animal and fish populations. Though once hotly debated, the evidence shows that during the Ebola outbreak of 2002–03, more than 5,000 gorillas died of the virus. In 2015, an outbreak of parvovirus was thought to be responsible for a gastrointestinal wasting illness that affected hundreds of millions of starfish off America’s West Coast, many of which succumbed. Given that the coronavirus is a novel virus, we need to ensure that our at-risk wild animal and sea life populations do not experience massive die-offs or suffer extinctions because we failed to act to protect them.

What’s our concern globally right now? Above all else, it may well be untreated human waste. At Dalhousie University in Nova Scotia, scientist Graham Dellaire and his cohorts predicted in an unpublished preprint study that at least 15 species of marine mammals, including whales, dolphins, seals, otters, and sea lions, are susceptible—or potentially more susceptible than humans—to coronavirus infection. This is based on their analysis of ACE2 receptors, the key protein for virus entry. (The American Veterinary Medical Association notes that other processes are necessary for a virus to replicate and spread, so it is difficult to make definitive statements regarding the ability of the virus to transmit.) Some of these species are endangered, and their infection would likely occur either through direct contact with humans at zoos or aquariums or via untreated wastewater that is contaminated with the coronavirus from human sewage.

Several countries, including Italy, Australia and Spain, have detected the coronavirus in untreated wastewater, and scientists have shown that previous coronaviruses remained infectious in the contaminated water for days to weeks. The question, of course, is whether virus present in the water will lead to actual infections in sea life. Dellaire told me that while no marine mammals have been found yet infected with SARS-CoV-2, “…beluga whales and dolphins have been found to be infected by related gammacoronaviruses.” That includes four dolphins in San Diego Bay who were symptomatic with a gastrointestinal illness this past July.

The potential consequences are grave. Coronavirus infections were linked to a beluga whale that experienced lung disease and terminal liver failure, and Pacific harbor seals that died from pneumonia in 2000. Said Dellaire, “We do not know how bad the disease could be in these mammals. It could be a sniffle or multi-organ damage, just like COVID-19 in humans.” It also could be nothing, if transmission is negligible.

To help mitigate the impact and prevent coronavirus transmission, Dellaire and his colleagues believe proper treatment of wastewater and raw sewage is essential. They even discuss what right now may sound inconceivable: a potential vaccination program for endangered mammal populations in which the goal is to achieve herd immunity, or perhaps pod immunity. In fact, vaccines have already been used successfully in gray seals for contraceptive purposes, so we know the technology is there.

If you get COVID, know that your furry friends and oceangoing pals may be susceptible, though we have seen only rare spread so far. While many studies are underway, the CDC recommends that pet owners infected with the coronavirus maintain hygiene precautions and restrain from having direct contact with their animals. If possible, another member of the family should care for the pets until the individual is no longer infectious. Like so much else in the age of COVID, snuggle time will have to wait.

But let’s help save the Shamus of the world, too. Let’s limit visitor contact with at-risk mammals at marine parks and aquariums to reduce viral exposure. Let’s work also with policymakers, cities, and underdeveloped countries with poor sanitation to better monitor live virus in our waters and treat wastewater appropriately. Dellaire recommends at least secondary treatment of wastewater or—even better—UV or ozone treatment, which he says destroys up to 99% of pathogens.

The technology is ready. A drone already exists, for example, that can collect mucus from a whale and feasibly detect viruses like the coronavirus. We have the resources. We need to investigate further how much transmission is occurring under natural conditions, conduct more surveillance and studies, and then determine how we might best prevent our now-human pandemic from becoming a problem for the animal kingdom as well.

Carolyn Barber has been an emergency department physician for 25 years. She is cofounder of the homeless work program Wheels of Change and author of a new book, Runaway Medicine: What You Don’t Know May Kill You.