Why are local governments paying Amazon to destroy Main Street? 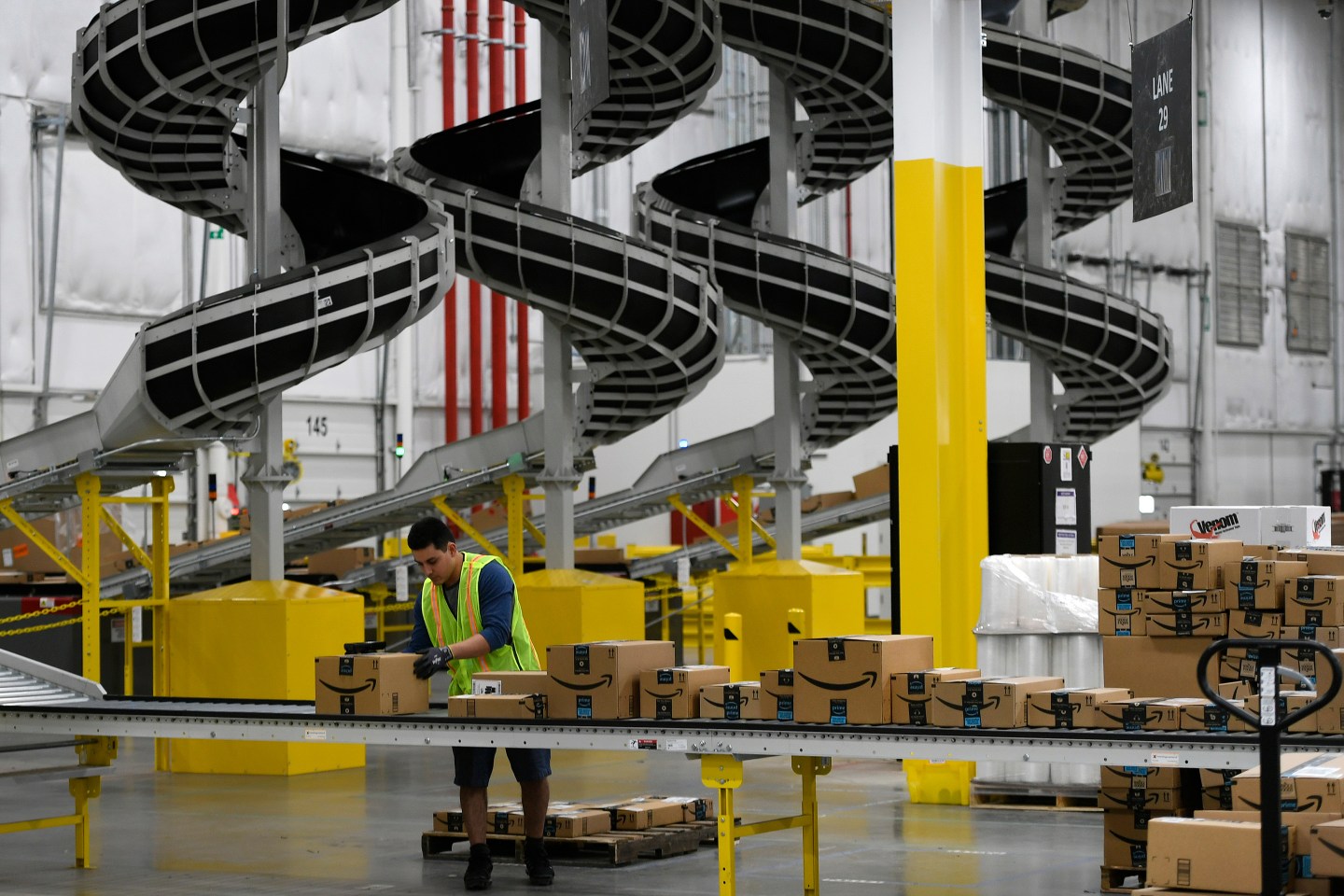 THORNTON, CO - FEBRUARY 19: A warehouse associate checks labels on boxes before they are loaded on to trucks to be shipped out at Amazon's Fulfillment Center on March 19, 2019 in Thornton, Colorado. The facility which opened in July of 2018 is 855,000 square feet, and employees over 1500 people. The Thornton facility is a state-of-the-art facility that uses Amazon Robotics to move the merchandise around from one area to the next. Hundreds of workers perform a variety of jobs in the huge facility. Many workers stand at stations, picking items to ship from trays brought to them by robots that roam the massive warehouse floor. The robotic facility, near I-25 and 144th Avenue, distributes small- and medium-sized items and allows for quicker delivery of orders in the metro area. (Photo by Helen H. Richardson/MediaNews Group/The Denver Post via Getty Images)
Helen H. Richardson—MediaNews Group/The Denver Post/Getty Images

The coronavirus pandemic has brought new scrutiny to the way in which Amazon treats its warehouse workers, whose exhausting, precarious positions now come with a decent chance they’ll be exposed to a deadly virus. And yet, Amazon is going gangbusters to expand its network, opening new facilities all across the country with the aid of compliant cities and states and little recognition of Amazon’s devastating impact on local economies.

In North Andover, Mass., for instance, Amazon recently received $27 million in public funding to build a new warehouse. In Windsor, Conn., it was $8.8 million. The property taxes for a new Amazon distribution center in Glenwillow, Ohio, will be reduced by nearly half for 15 years. And the e-commerce giant is receiving taxpayer dollars for distribution facilities in Whiteland, Ind., and Arlington Heights, Ill., too. Overall, Amazon has received nearly $3 billion in subsidies from state and local governments. There are surely other handouts in the works.

Officials justify these monetary favors as necessary for bringing jobs and investment to a local area. But in truth, policymakers are funding the demise of Main Streets across America and further entrenching Amazon as a gatekeeper across wide swathes of the economy. Federal and state officials are looking anew at Amazon’s power, most prominently through Congress’ big tech hearing in late July and state-level antitrust investigations. Local officials need to pay attention to Amazon’s power, too.

Amazon’s distribution network promotes at least two significant interests for the company: accessing customers and using that access to force other sellers into coercive arrangements that promote Amazon’s other lines of business. As Good Jobs First has found, Amazon strategically places warehouses where there is a concentration of disposable income, Amazon Prime subscribers, and easy access to highways and airports. That makes sense, since Amazon’s aim is to get stuff to people who are likely to buy things from it faster, regardless of any sort of tax incentive or other regulatory favor.

But Amazon also leverages its warehouses to extract funds from other businesses by giving Prime Eligibility and the coveted “Buy Box” to sellers who pay Amazon to handle their storage and distribution through Fulfillment by Amazon, or FBA. Because buyers are far more likely to buy items that are Prime eligible, Amazon can coerce businesses into paying Amazon to handle their warehousing, even if it would be cheaper and faster to use alternative methods.

This sort of arrangement also allows the company to continue to bolster its shipping operation. Last year, Amazon delivered nearly 50% of its own packages, compared to less than 15% in 2017. Dominance in one area of commerce—online shopping—is being used by Amazon to make inroads into others, with the eventual aim of toppling FedEx and UPS.

Amazon pushes sellers into using its logistics system even when doing so slows down deliveries. As Ron Knox and Shaoul Sussman of the Institute for Local Self-Reliance recently explained, Amazon could have reopened its shuttered Seller Fulfilled Prime program when orders spiked during the pandemic, granting Prime eligibility to sellers who handle their own logistics. It didn’t, and the subsequent backlog kept critical orders from reaching their destination quickly.

To Amazon, it was simply more important to keep funneling orders into its own storage and delivery system. Most companies in the fulfillment space think Amazon is well on its way to monopolizing the business.

Despite all this, many local officials are still keen on subsidizing Amazon’s expansion because they believe it will bring jobs and revenue to struggling cities and towns, especially during a pandemic that has devastated local businesses and government budgets. But according to the Economic Policy Institute, new warehouses don’t bring wider employment growth to a local economy. They either blunt other economic activity or have too small of an overall impact to even measure.

Amazon also decimates local budgets through its effect on traditional retail. A 2015 analysis found that Amazon sales displaced retail outlets that would have paid $528 million in property taxes. And that’s before getting into the specific tax benefits given to Amazon, which usually come in the form of property tax reductions.

By continually funding the expansion of Amazon’s fulfillment network, cities and states are ensuring that their own brick-and-mortar stores fall ever further behind, and that Amazon’s monopoly power extends from online shopping to logistics, shipping, and beyond, making the emergence of a competitor in any of those areas ever more unlikely. They’re guaranteeing that local businesses hoping to expand will be forced to pay tolls to access Amazon’s customer base, above and beyond the usual fees Amazon extracts from users of its platform.

Since Amazon needs its distribution network, it is perfectly willing to open new facilities without taxpayer largesse—as it reportedly did in Danbury, Conn., and Fort Bend County, Texas. Rather than subsidizing Amazon, local officials must close the spigot, and focus their limited resources on providing key services and promoting small, local businesses that are threatened by the COVID-19 pandemic.

Pat Garofalo is director of state and local policy at the American Economic Liberties Project and author of The Billionaire Boondoggle: How Our Politicians Let Corporations and Bigwigs Steal Our Money and Jobs.