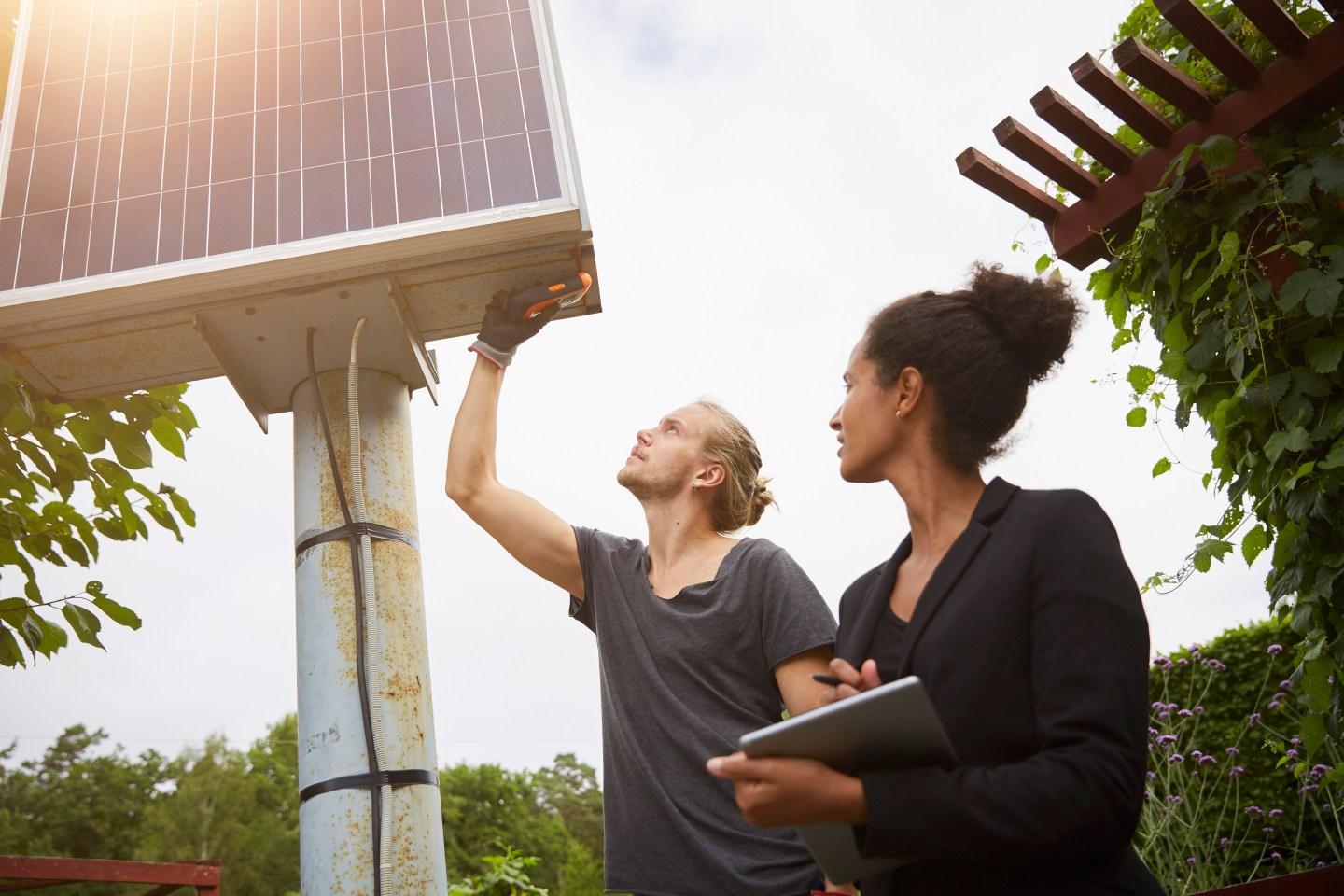 Sadly, due to the COVID-19 pandemic, we now have the highest unemployment we’ve seen since the Great Depression. Many of those jobs will disappear forever in the post-COVID world, and others will take years to return to normal. But with great crises come great opportunities. Today we have a once-in-a-lifetime chance to solve our current economic crisis: by switching to clean energy.

At Rewiring America, we estimate we can create some 25 million U.S. jobs if we move on from fossil fuels and electrify the economy by 2035, as we’ve detailed in a recent study . This estimate comes from an in-depth energy and engineering analysis from comprehensive datasets of energy, labor, and materials, conducted by the two of us and MIT engineer Sam Calisch. We know, with great precision, where our energy currently comes from, how much we use, what we will need to build to transform our system to one with zero carbon emissions–and how many people it will take to build those things.

Simply put, clean energy technologies require more labor in manufacturing, installation and maintenance than fossil fuel technologies. It takes more people to install and keep a wind farm running than it does to drill a well and keep it pumping to produce the same amount of energy over time. All those jobs have a multiplying effect: The woman installing wind farms will get a handsome paycheck that she’ll spread around her local economy, reviving restaurants, shops, and other hard-hit businesses.

To power our lives without fossil fuels to the level of comfort we enjoy today (cars, heated homes, and other push-button conveniences), we’ll need to build capacity to generate approximately 1500 GW of electricity, which is more than three times the amount of energy that the U.S. currently generates. The scale of electrification will be more massive than any project America has seen in decades. We will need hundreds of thousands of wind turbines, six million zero-emission trucks, a million miles of transmission lines, hundreds of millions of electric vehicles, heat pumps and electric induction ranges, billions of solar cells and more than a trillion batteries. And we’ll need tens of millions of jobs to manufacture, build, install, and manage all those things.

When we get to work, we’ll have clean energy jobs in every zip code, because we’ll need to install solar panels on our homes and wind turbines in our fields. These aren’t jobs we can outsource to other countries; they will stay close to home. People hit hard by the current crisis will have  an opportunity for good new jobs, while helping to transition their communities to cleaner and safer sources of power.

We have the technological solutions to electrify America renewably, but we’ll also need new policies and financing in place. Transitioning to clean energy will require higher up-front costs, building new, more widely distributed electrical infrastructure. Since much of this infrastructure will be personal–the solar panels on your roof and the electric vehicles in your garage–we’ll need access to inexpensive financing to make it work.

Following the Great Depression, the job programs and financial innovations of the New Deal offered some Americans an opportunity to buy a house, appliances, and new-found stability (though African-Americans were excluded from federal mortgages). Today, we have the opportunity to make similar “climate loans” more inclusive and equitable, helping everyone make the switch from fossil fuel-powered machines to electric ones.

What will this all cost? With the proper financing, this jobs solution will not cost the average American any upfront investment. In addition, once we build our infrastructure, renewable electricity will be very cheap—the sun shines and the wind blows for free—saving the average household about $2,000 per year and providing predictable energy bills. This is an especially big win for low-income Americans, who are hardest hit by fluctuations in fuel prices. When energy is cheap, everything is cheaper.

In addition to smart financing, we also need regulatory reforms to update building codes to make it easier to electrify and install rooftop solar. To make the system run smoothly, we’ll need “grid neutrality,” so that everyone can exchange energy freely and democratically, the way we exchange information over the Internet.

Accomplishing this task will require a historic mobilization and government investment, but America has done it before. During World War II, for instance, when the U.S. government had to quickly ramp up its military arsenal to fight Hitler and save democracy, it offered capital plus a guaranteed 7% profit to manufacturers who would turn their engineering know–how into producing armaments –“patriotism plus 7%.” It worked: at the height of the Great Depression, U.S. unemployment was over 24%. With the wartime production effort, in 1944, unemployment was 1.2%. We estimate that the cost of transitioning to a zero-carbon economy will be relatively less than the effort to produce the “arsenal of democracy” that won World War II.

Now, as during World War II and the Great Depression, we have a rare opportunity to rise from a crisis, defeat a mortal threat, and rebuild America for a cleaner, more prosperous future.

Saul Griffith is an engineer, physicist, and MacArthur “Genius Award” Fellow. Alex Laskey is a clean energy entrepreneur and founder of Opower. They are co-founders of the nonprofit Rewiring America.