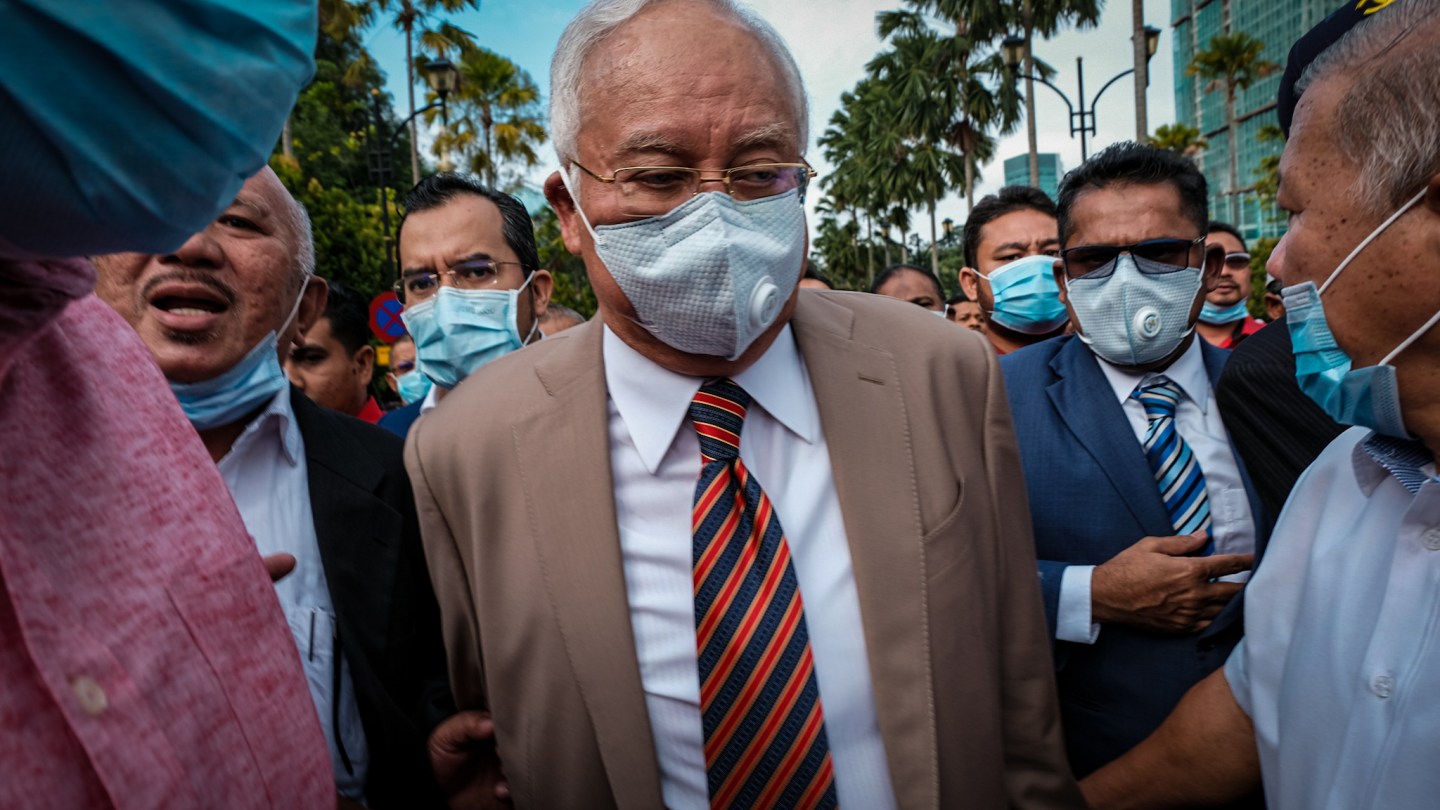 A Malaysia court sentenced former prime minister Najib Razak to 12 years imprisonment after ruling him guilty in the first of a series of trials linked to 1MDB.

Najib was guilty Tuesday of all seven charges in the case involving 42 million ringgit ($10 million) of funds deposited in his personal accounts from a former unit of 1MDB. His lawyer has said an appeal against the ruling is a certainty, while seeking to keep him out of jail during the appeal process.

High Court Judge Mohd Nazlan Mohd Ghazali sentenced him to 12 years in jail for one count of abuse of power, as well as 10 years each for three charges of money laundering and three criminal breach of trust charges, to be served concurrently. He must also pay a fine of 210 million ringgit.

The judge told the court he found “the defense has not succeeded in rebutting the presumption on the balance of probabilities or raising reasonable doubt on the charge against the accused” as he delivered his judgment on the abuse of power charge.

The verdict comes days after Malaysia resolved settlement talks with Goldman Sachs Group Inc. over the bank’s role in raising funds for 1MDB during Najib’s time as prime minister. The bank agreed on a $3.9 billion settlement, including $2.5 billion in cash, in return for all its charges being dropped.

Prosecutors questioned dozens of witnesses over months to build a case that showed Najib’s “pervasive and imperious” role in SRC International Sdn., the former unit of 1MDB, the judge said in November. The former leader had testified that he acted in the best interests of the country and consulted the cabinet and 1MDB executives at every step of the way, while his lawyers argued that he had been misled by others, including fugitive financier Low Taek Jho.

Jho Low played a crucial role in transferring the funds to Najib’s account, according to the judge on Tuesday. BlackBerry Messenger conversations revealed the two were communicating, and there was no basis to claim the account balance was being hidden from Najib. Low has consistently denied wrongdoing.

The judge also dismissed the defense’s premise that they believed the funds were a donation from the Saudi royal family. Najib could have verified it himself with the Saudi government, yet chose to take Low’s word for it, the judge said. On charges of money laundering, the judge said Najib practiced “willful blindness” to the receipt of the proceeds.

The verdict comes two years since the charges were announced against Najib, who at the time had just been ousted from power on a wave of public anger over the 1MDB scandal and rising living costs. Since then, the administration that first brought him to book has been replaced by Prime Minister Muhyiddin Yassin’s government, which counts on the backing of a party once led by Najib.

The trial is only the first of at least three involving Najib, who faces dozens more corruption and money-laundering charges, including those linked to billion-dollar acquisitions and bond sales by the scandal-ridden fund.