The mystery of China’s unemployment rate 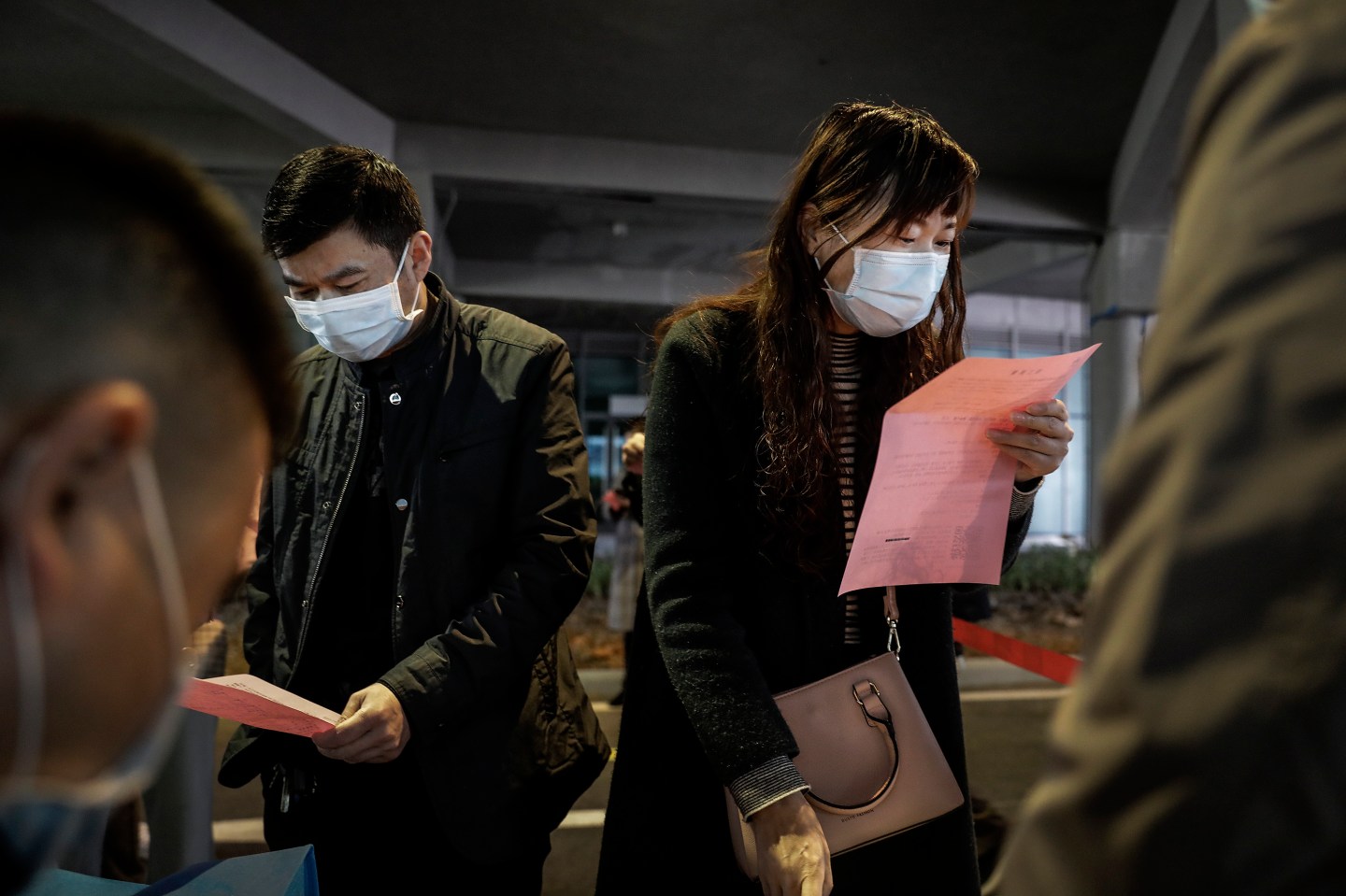 Applicants at a job fair in Wuhan on April 21 where over 1,600 vacancies were open for residents emerging from a months-long lockdown (Photo by Getty Images)
Getty Images

When China released economic data for its first quarter in April, Beijing was commended for not disguising the negative impact the coronavirus had on its economy. GDP growth fell 6.8%, broadly in line with estimates proposed by economists. However, there was one data point that raised a few eyebrows: unemployment.

According to China’s National Bureau of Statistics, unemployment for March stood at 5.9%, not far from the 5.2% it had registered in December, before the COVID-19 outbreak began. In the intervening months, 460,000 businesses declared bankruptcy. Officially, unemployment spiked in February at 6.2%, and then declined in March. In April, it edged up again to 6%.

“The unemployment figure was remarkably stable,” Oxford Economics lead economist Tommy Wu said of the figure in March, suggesting that the official tally is likely “not that representative” of the labor force. Of course, unemployment rates worldwide rarely are accurate reflections of the current state of affairs, tending instead to lag behind changes. But pinning a reliable figure on the vital statistic is especially difficult in China.

China’s official unemployment rate is typically stable, hovering around 4-5% for decades. Until recently, Beijing determined unemployment by the number of urban workers who registered for unemployment benefits with local governments. In 2018, the central government reformed the system in a bid to gain a more accurate accounting of its labor force. Unemployment is now gauged by a monthly survey of urban residents, but the new model still has its flaws.

First, rural unemployment isn’t included; the 5.9% statistic touted in March is only representative of urban areas. The exclusion of rural regions is a legacy of China’s socialist system in which all rural residents were allocated government-owned land to till and were therefore technically employed by the state, says Li Chen, assistant professor of Chinese studies at the Chinese University of Hong Kong.

“In reality the rural situation has changed a lot, but the institutional design has remained the same,” Li said. “Many rural residents have become urban workers and so they don’t stay with their land anymore. But, officially, they still maintain their land rights so, for this reason, institutional design does not fully recognize rural unemployment.”

Second, the current method is thought to miscalculate China’s massive migrant worker population; some experts say the workers are undercounted, others argue they are exempted altogether.

China’s unemployment data is entangled with the country’s peculiar household registration system, or hukou, which divides the populace into rural and urban areas. When a rural resident moves to the city to find work, these migrant workers typically retain their rural resident status—or rather, they are denied urban resident status.

The updated unemployment survey is intended to ignore a worker’s hukou. However, migrant workers switch jobs frequently and often work in unofficial capacities—as unregistered street vendors or cleaners, for example. The fluidity of China’s “floating population” of migrant workers makes it difficult to determine their exact number and their current employment status.

In 2019, China’s government counted 291 million migrant workers, who constituted roughly 36% of the total work force. In March this year, that number had dwindled 56% to just 129 million, according to the National Bureau for Statistics, which reports the number of migrant workers alongside the figure for urban unemployment. The massive drop in migrant worker levels suggests mass unemployment in their ranks.

An open questions is whether jobless migrant workers are counted in Beijing’s official unemployment rate. Geoffrey Crothall, director of communications at workers’ rights advocate China Labor Bulletin, says they are, although many other experts say they aren’t.

“You can’t rely on the survey numbers for anything really comprehensive, but the current survey system is a better measure than the method they used to use,” Crothall said, adding that the survey data probably accounts for about 60% of the total workforce, as it ignores workers in rural areas.

Recently China’s state-run Global Times weighed in, citing an anonymous official at the National Bureau of Statistics for confirmation that migrant workers are included in the survey system.

The severity of job losses in the U.S. cast more doubt over the reported stability of China’s labor force. U.S. unemployment skyrocketed during the first four months of the year to its highest level since the Great Depression. Data for April shows U.S. unemployment at 14.7%, up from 4.4% in March and 3.5% in February. Goldman Sachs predicts the jobless figure will peak at 25%.

Governments the world over are concerned by unemployment among their citizens, but the Chinese Communist Party (CCP) is perceived to be more concerned than most. Li says that, as a one-party state, a key part of the CCP’s legitimacy is derived from “delivering sustained economic development and acceptable unemployment levels.”

China emerged from its period of isolationist communism in the late 1970s. As it did so, the CCP established two figures as metrics by which to measure the success of the economic Reform and Opening Up policy: GDP and unemployment.

There’s a common belief among China observers that if unemployment rises, demonstrations against the government will increase as well, threatening the Party rule.

However, Corthall says there isn’t any obvious correlation between unemployment and protests. Most protests tend to be directed towards specific grievances workers have with employers, such as unpaid wages or missing social security payments.

Nevertheless, Beijing is “clearly concerned” with unemployment, Corthall adds. This week, ahead of the annual gathering of China’s parliament, the National People’s Congress, Beijing put out a memo pledging to position employment at the center of government policy controls, along with monetary and fiscal measures.

Economists skeptical of Beijing’s own reporting rely on alternative means to estimate the true number of unemployed in China. Some, such as the Economist Intelligence Unit, use GDP growth to deduce a relative shift in employment—translating shifts in GDP to growth or loss in household income and deducing unemployment from that. This year, EIU estimates unemployment could average 10%.

In 2017, a team of researchers used data from China’s triannual Urban Household Survey (UHS) to estimate China’s unemployment at roughly twice the official number, averaging 10.9% between 2002 and 2009. The UHS is essentially a more refined survey than the official unemployment one, and the researchers say it’s similar to the Current Population Survey that the U.S. uses to determine labor data.

Zhuang Bo, chief China economist at TS Lombard, looked at reported profit and productivity declines across industrial sectors—manufacturing, services, construction—to speculate on the number of laborers that would need to be laid off in each. He concluded there are as many as 50 million unemployed migrant laborers left unaccounted for in China’s figures, which could more than double the official unemployment rate.

However, Zhuang isn’t convinced by his own methodology, saying that “on the ‘real’ number of China’s unemployed, at best all we can do is form a wild, educated guess.”