Social distance, party of one: Photos showing how the coronavirus is changing how we dine out 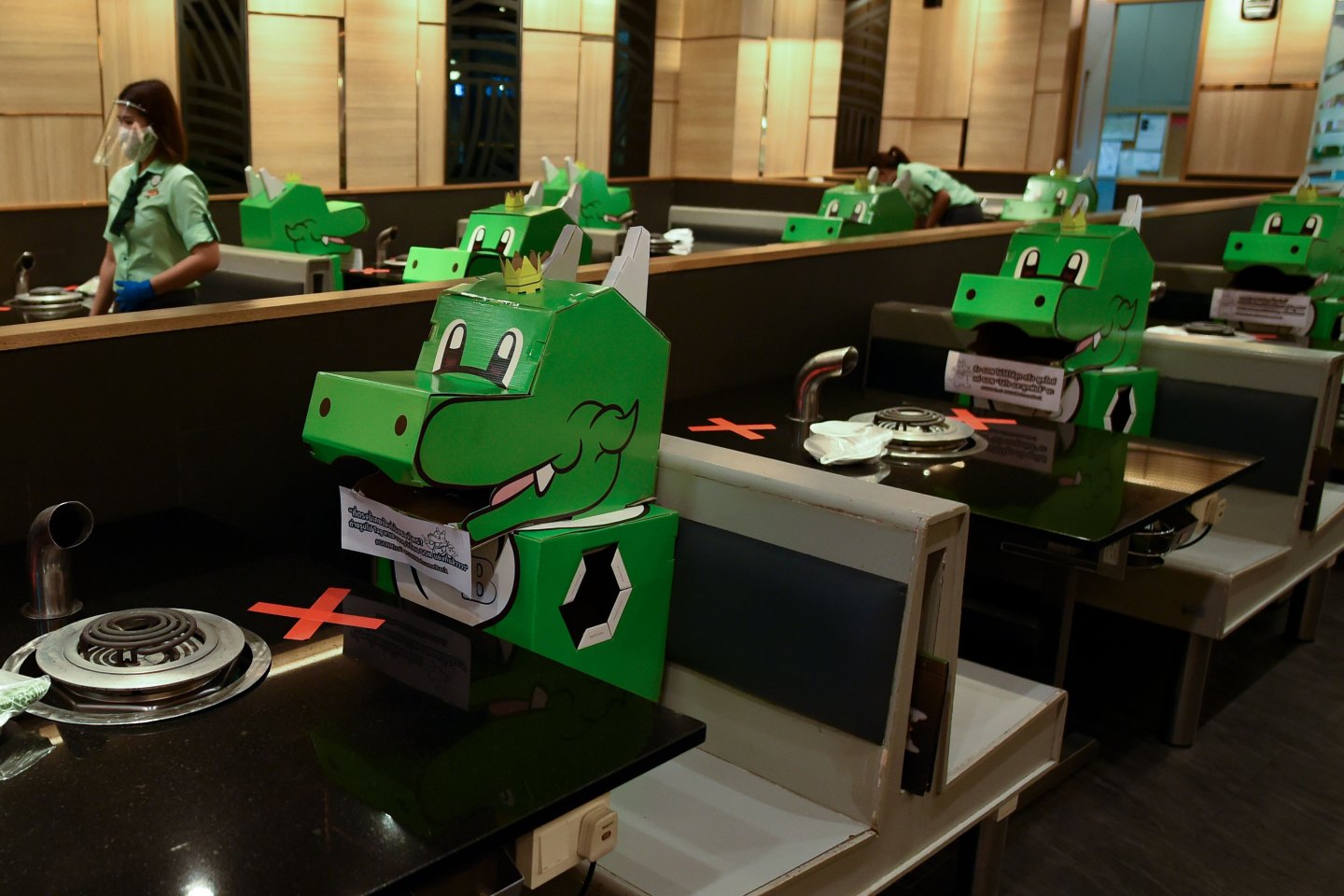 Mannequins. Cardboard cut-outs. Plastic blow-up dolls (including some of an adult nature). Not so long ago, propping one of these items up at a dining table in public might have seemed like a farcical element straight out of a sitcom.

Now, even the strangest of socializing concepts seems like just another day in the life of living through a pandemic. But restaurants are brainstorming every safe social distancing strategy possible to reopen their doors to diners, and no idea is off the table—whether that be installing plexiglass between seats or asking guests to don pool noodle hats to ensure they stay six feet apart.

As wacky as these props might seem, restaurant managers and owners have no time left to waste.

The global hospitality industry—restaurants and bars, especially—has been particularly devastated by the shutdowns imposed to curb the spread of COVID-19. In the U.S. alone, more than 8 million restaurant workers have already been furloughed or laid off, with the risk spreading to more than 11 million as the economic crisis progresses. The restaurant and foodservice industry lost more than $80 billion in sales over the course of March and April, according to the National Restaurant Association, and that figure is projected to reach $240 billion in losses by the end of 2020.

Possibly the most dire forecast: based on a recent survey covering a third of the restaurants in its network, OpenTable estimates one in four restaurants will close before the pandemic is over—whenever that may be.

In the meantime, restaurant dining will look quite different from ever before, as these photos show, and that isn’t necessarily a bad thing. At the very least, it could be a new source of entertainment.

EtenRestaurant, part of the Mediamatic Biotoop centre in Amsterdam, is testing greenhouse-like booths for customers to eat in, keeping them protected from other diners.
Willem Velthoven for Mediamatic Amsterdam/Cover Images/Getty Images
This Starbucks in Hong Kong assures social distancing by taping off-limits areas, April 2, 2020.
Tyrone Siu—Reuters
As restaurants in Sydney, Australia were beginning to open in mid-may Five Dock Dining restaurant owner Frank Angeletta had the novel approach of creating ambiance for his limited number of patrons with cardboard cutouts along with a taped background noise recording to simulate guest “chatter.”
James D. Morgan—Getty Images
At the Penguin Eat Shabu hotpot restaurant in Bangkok people eat in between maze-like plastic partitions, May 5, 2020.
Lillian Suwanrumpha—AFP/Getty Images
Workers sit at individual tables as they practice social distancing measures during a break at the Airbus SE assembly plant in Broughton, U.K., on April 30, 2020.
Paul Thomas/Bloomberg via Getty Images
Employees, wearing protective face masks, sit at tables with plastic barriers to maintain social distancing as they take breaks from their work on the automobile assembly line at the recently reopened Renault auto factory in Flins, France May 6, 2020.
Gonzalo Fuentes—Reuters
Fish Tales restaurant and bar in Ocean City, Maryland, offer a more whimsical approach to secure proper social distance is maintained for their customers, “bumper tables,” inflatable inner tubes on wheels, May 16, 2020.
John Middlebrook—Reuters
As Virginia will allow restaurants to reopen at only 50 percent capacity in order to maintain social distancing the chef at the Inn at Little Washington, a Michelin three star restaurant in the Virginia countryside, Patrick O’Connell, plans to seat mannequins costumed in 1940’s era clothing rather than let the tables sit vacant when diners return on May 29, 2020.
Win McNamee—Getty Images
As Italy moves to the second phase or re-opening employees of a restaurant in Milan give a demonstration of one approach to welcome customers with plexiglass dividers between tables.
Claudia Greco—AGF/Universal Images Group/Getty Images
The Bar-B-Q Plaza restaurant in Bangkok, Thailand uses cardboard models of their dinosaur mascot “Barbegon” to occupy some seats to ensure social distancing by their guests on the first day of reopening, May 17, 2020.
Anusak Laowilas—NurPhoto/Getty Images