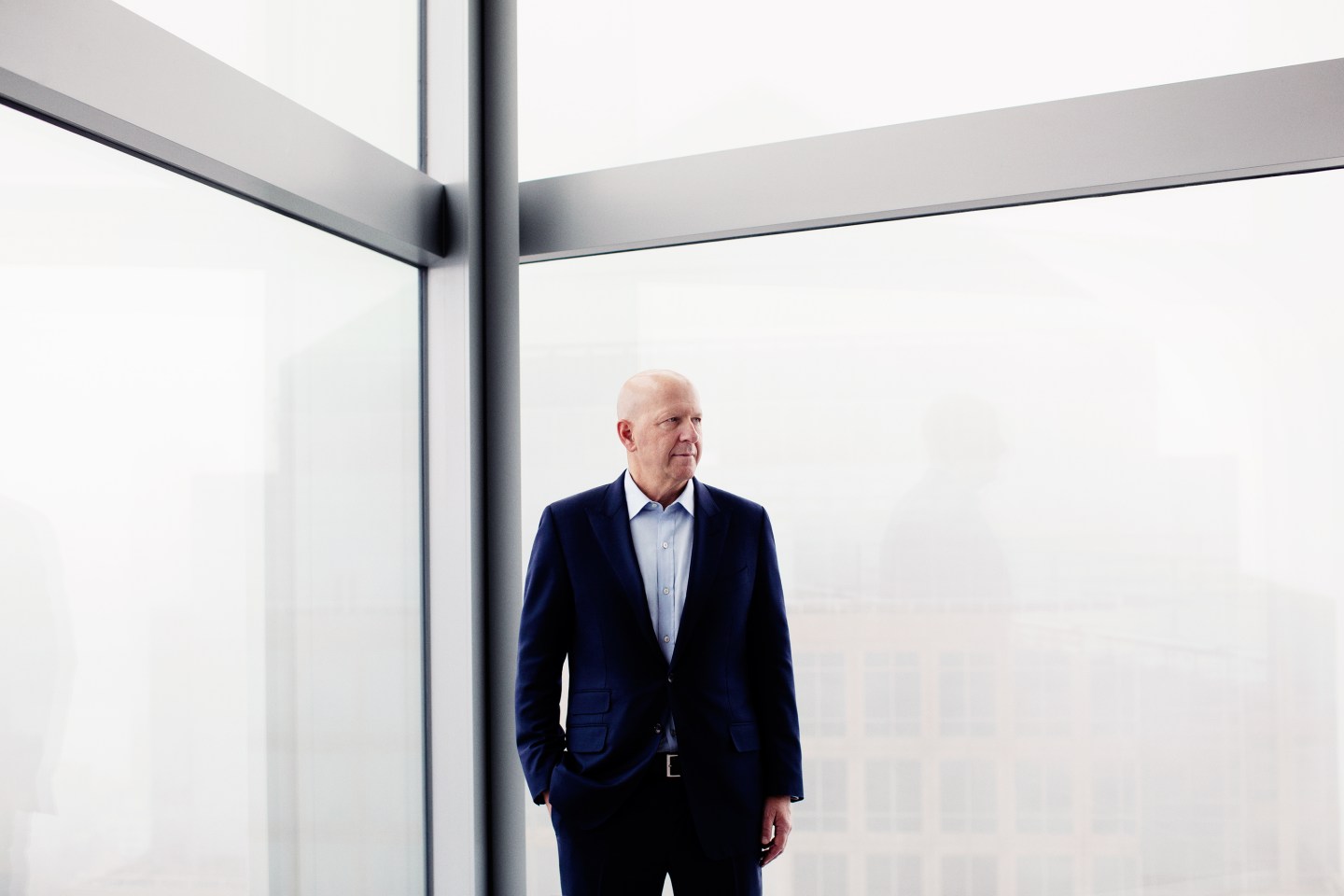 Subscribe to Outbreak, a daily roundup of stories on the coronavirus pandemic and its impact on global business, delivered free to your inbox.

James Gorman, the CEO of Morgan Stanley, was working from the firm’s offices until about three weeks ago, when he began experiencing coronavirus symptoms in mid-March. Since then, Gorman has been working from home, where he’s also recovered after testing positive for COVID-19, the CEO told employees Thursday.

As the biggest Wall Street institutions have sent most of their employees (including several CEOs) home amid the pandemic, the bank leaders who are still going into the office every day are quite literally few and far between.

But they include two very big names: Goldman Sachs CEO David Solomon, who has been working out of the bank’s lower Manhattan headquarters, and Brian Moynihan, the CEO of Bank of America, who is commuting into the firm’s Boston offices.

That’s a different approach than the one taken by the CEOs of Citi, Wells Fargo and JP Morgan Chase, who are all currently working from their respective homes.

Jamie Dimon, JP Morgan’s CEO, for one, has been working out of his home office since last week, after being released from the hospital following emergency heart surgery in March. Charlie Scharf, the CEO of Wells Fargo who normally works from the San Francisco-based bank’s New York offices, has been running the bank from his home for the past couple of weeks, according to a spokesperson. And Citi CEO Michael Corbat stopped going into the office March 24, the bank confirmed—as soon as he installed enough additional Internet routers at his home office to ensure he could log on from there, The Wall Street Journal reported. (Government-imposed stay-at-home orders are currently in effect for non-essential employees in the all the areas where the major banks, and their CEOs, are based, including New York, San Francisco, Boston and Charlotte, N.C., where Bank of America is headquartered).

Meanwhile, with New York City at the heart of the coronavirus outbreak, David Solomon of Goldman Sachs is one of just 60 employees working from the bank’s New York offices, out of the usual 12,000. Though he generally prefers to take the subway around the city, as Fortune first reported in a profile of Solomon late last year, Solomon is avoiding public transportation as a safety precaution for the time being. Yet he continues to come in to the office, where he is “almost completely alone”—partly because Solomon happens to live nearby, says a person close to the bank. (Solomon’s residence in New York’s SoHo neighborhood is just slightly over a mile from Goldman HQ.) Besides a few security guards, “he [hardly] sees anybody,” other than through a computer screen on video calls, the person adds.

Appearing on CNBC last week, Solomon noted that 98% of Goldman Sachs’s employees around the world are currently working remotely. “But there are some people that do have to be in the building to move money and for processes. And so, I have been making my center of operations from here,” he said. “There are other people in the building. I feel like I should be here. And it’s certainly a very, very safe place to operate with so few people in the building.

Indeed, while Solomon, along with Goldman’s COO John Waldron and CFO Stephen Scherr, are all working out of the firm’s offices, they have implemented social distancing protocols: Only Solomon is working from the 41st floor, where the executives all typically sit (though technically he stands at his desk). Scherr has been temporarily relocated to the 29th floor, while Waldron is currently posted across the Hudson river, in Goldman’s Jersey City building.

Still, on an internal videoconference with all of Goldman Sachs’s global employees this week, Solomon strongly encouraged most of them to do as he says, not necessarily as he does—and to continue staying home, according to a person who attended: “This is what I do. You need to do whatever makes you feel safe and comfortable,” he said.

Such “global town halls,” as Solomon calls them, are something he has pushed for since becoming the bank’s CEO in 2018, but which were not technologically possible for Goldman to pull off as recently as last fall. With the pandemic, the bank’s engineering teams worked swiftly to upgrade its teleconferencing capabilities to accommodate its nearly 40,000 employees simultaneously; Goldman has held its first such virtual town halls for the last two weeks in a row.

Of course, working from the office comes with some additional risk of exposure to the coronavirus, and no executive is immune to COVID-19, as Gorman’s diagnosis illustrates. In late March, The CFO of investment bank Jefferies, 56-year-old Peg Broadbent, died from the virus.

In an interview with Barron’s last week, Bank of America’s Moynihan defended his decision to keep working from the office. “I’m fine,” he said. “I can’t do the amount of calls and stuff constructively [outside the office]. The building is empty except to essential employees, like the call centers. The CFO and myself and other people still have to be here.”

Some observers have expressed concern for the CEOs’ health. When Solomon posted a photo to Instagram last week showing the Navy hospital ship USNS Comfort arriving in New York City, taken from his perch on the 41st floor of Goldman HQ, the first commenter replied, “Why are you still in the office David… stay home!” But another follower wrote, “Nice to see that you didn’t leave the city in a moment where people need their leaders,” followed by three thumb’s up emojis.

—3 strategies small business owners are using to get their SBA stimulus loans faster
—When will your SBA loan be approved? Why the process is moving so slowly
—College educated investors may be more likely to fall for coronavirus scams
—Corporate credit markets do brisk business after Fed help
—Listen to Leadership Next, a Fortune podcast examining the evolving role of CEO
—VIDEO: 401(k) withdrawal penalties waived for anyone hurt by COVID-19