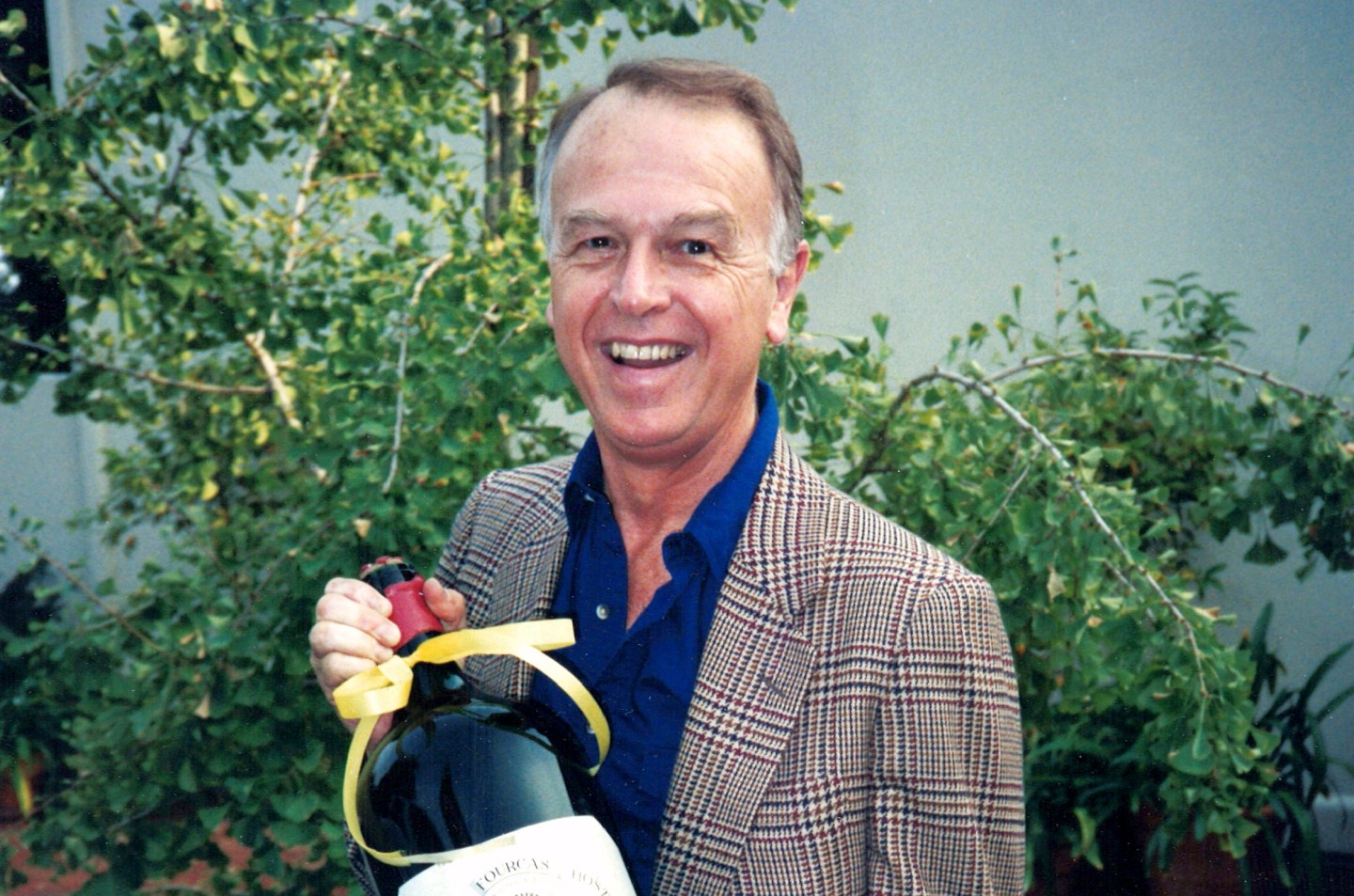 This circa 1985 photo provided by Esme Gibson shows Joe Coulombe, the founder of the Trader Joe's market chain, at his home in Pasadena, Calif. Coulombe, the man who created Trader Joe's markets with a vision that college-educated but poorly paid young people would buy healthy foods if they could only afford them, has died. Coulombe's family says he died Friday, Feb. 28, 2020 at age 89. He opened the first of his quirky, nautically themed markets in Pasadena, California, in 1967. He stocked it with granola, organic foods and other items he bought directly from suppliers to hold prices down. Trader Joe's now has more than 500 stores in over 40 states. (Image by Esme via AP)
Courtesy of Esme Gibson via AP

Joe Coulombe envisioned a new generation of young grocery shoppers emerging in the 1960s, one that wanted healthy, tasty, high-quality food they couldn’t find in most supermarkets and couldn’t afford to buy in the few high-end gourmet outlets.

So he found a new way to bring everything from a then-exotic snack food called granola to the California-produced wines that for flavor compared with anything from France. And he made shopping for them almost as much fun as sailing the high seas when he created Trader Joe’s, a quirky little grocery store filled with nautical themes and staffed not by managers and clerks but by “captains and mates.”

From the time he opened his first store in Pasadena, California, in 1967 until his death Friday at age 89, Coulombe watched his namesake business rise from a cult favorite of educated but underpaid young people — and a few hippies — to a retail giant with more than 500 outlets in over 40 states.

A giant yes, but one that across more than half a century has never lost its reputation for friendly service from employees decked out in goofy Hawaiian shirts, a newsletter that looks like it was published in the 1890s, and rows and rows of high-quality, moderately priced healthy food and great wine, even if you sometimes can’t ever again find exactly the same thing.

“He wanted to make sure whatever was sold in our store was of good value,” said Coulombe’s son, also named Joe, who added that his father died following a long illness. “He always did lots of taste tests. My sisters and I remember him bringing home all kinds of things for us to try. At his offices he had practically daily tastings of new products. Always the aim was to provide good food and good value to people.”

He achieved that by buying directly from wholesalers and cutting out the middleman, in many cases slapping the name Trader Joe’s on a bag of nuts, trail mix, organic dried mango, honey-oat cereal or Angus beef chili. He named several products after his daughters Charlotte and Madeleine and gave quirky names to others. Among them were Trader Darwin vitamins and a non-alcoholic sparkling juice called Eve’s Apple Sparkled by Adam.

He prided himself on checking out every vintage of wine from California’s Napa Valley, including Trader Joe’s standby, Charles Shaw, affectionately known as Two-Buck Chuck because it sold for $1.99. (It still does in the California stores, although shipping costs have increased the price in other states.)

“He sold a lot of better wines too,” his son noted with a laugh, recalling trips the family made to France to seek them out.

After selling Trader Joe’s to German grocery retailer Aldi in 1979, Coulombe remained as its CEO until 1988, when he left to launch a second career as what he called a “temp,” coming in as interim CEO or consultant for several large companies in transition. He retired in 2013.

Joseph Hardin Coulombe, an only child, was born on June 3, 1930, in San Diego and lived on an avocado ranch in nearby Del Mar. After serving in the Air Force, he attended Stanford University, where he earned a bachelor’s degree in economics, a master’s in business administration and met and married his wife, Alice.

A few years after graduation, he was hired by the Rexall drugstore chain, which tasked him with establishing a chain of convenience stores called Pronto. When Rexall lost interest in the stores, he bought them and had grown the chain to about a dozen outlets when the huge 7-Eleven company made a major push into Southern California.

“So I had to do something different,” he told the Los Angeles Times in 2014. “Scientific American had a story that of all people qualified to go to college, 60% were going. I felt this newly educated — not smarter but better-educated — class of people would want something different, and that was the genesis of Trader Joe’s.”

His wife’s parents had introduced him to a world of foods previously unfamiliar to him, including fine olive oil, fresh seafood and inexpensive quality wine, and he figured things like that would be perfect for the younger audience he was seeking.

As he bargained for those products, he’d sometimes come across a particularly exceptional olive oil or vintage wine, never to find it again, and he wouldn’t stock an inferior product in its place.

He eschewed promotional gimmicks like loyalty clubs or loss-leader sales, getting the word out with brief radio spots and the Trader Joe’s “Fearless Flyer” newsletter, whose old-style appearance was inspired by another money-saving effort. He wanted to dress up the newsletter’s stories with illustrations he cut out of magazines, but he made sure he only took ones on which the copyrights had expired.

He passed such savings on not only to his customers but employees, which Trader Joe’s boasts are among retail’s best compensated, with medical, dental, vision and retirement plans and annual salary increases the company says range from 7% to 10%. Many workers have remained with Trader Joe’s for decades.

“He just had a visit yesterday from employee No. 1,” his daughter Charlotte said shortly before her father’s death.

He and his wife also became well known in Southern California philanthropic circles, contributing time and money to such causes as Planned Parenthood, the Los Angeles Opera and the Huntington Library, Art Museum and Botanical Gardens.

Stories differ on how the name Trader Joe’s came about, with some saying it was inspired by a ride on Disneyland’s Jungle Cruise boat or a book he read called “White Shadows in the South Seas” or his favorite college hangout being a Trader Vic’s bar near Stanford.

Coulombe, who loved to travel, did acknowledge over the years that he had a fascination with the South Seas and put Trader into the name and a nautical theme inside the stores to lend that exotic appeal to customers.

In addition to his three children and wife of 67 years, Coulombe is survived by six grandchildren.