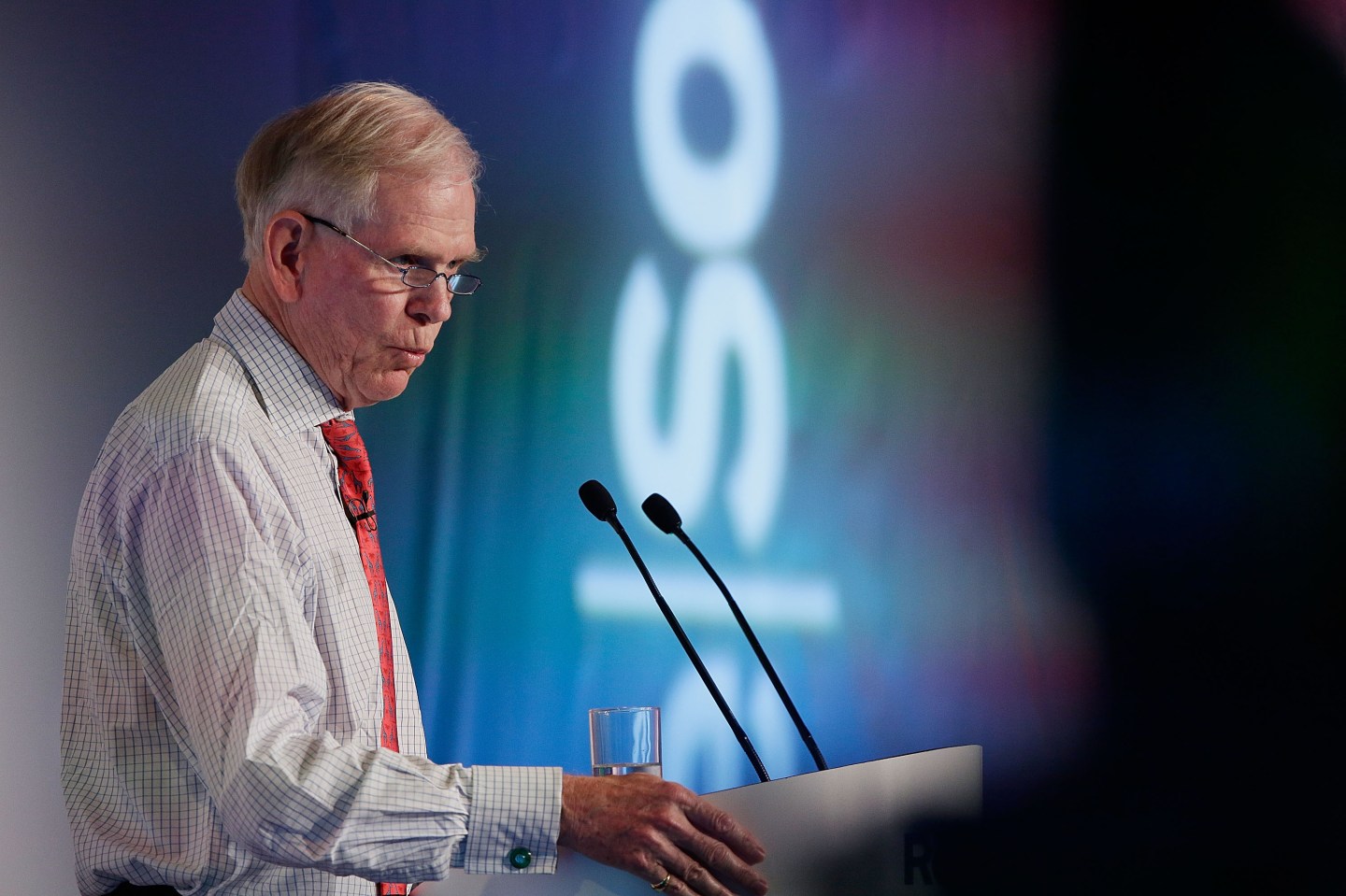 Over a career of more than a half-century, money manager Jeremy Grantham earned renown for calling times when rampant optimism on Wall Street was blowing financial bubbles destined to pop––and advised investors to wait for screaming bargains after the fall.

Grantham, co-founder of Grantham, Mayo, Van Otterloo (GMO), an investment giant that manages $65 billion chiefly for large institutions, predicted the tech collapse of the early 2000s and scored again with his warnings that the mid-2000s housing craze would end in grief. For the past several years, Grantham, 81, has devoted his time and most of his fortune to promoting environmental causes, and investments in green energy, through his Grantham Foundation for the Protection of the Environment.

Recently, Grantham––who grew up in Britain––called from his home in Boston to discuss the matchless opportunities for profit-making in green energy, how the oil and gas industries are doomed, and the need to transform accounting rules to account for companies’ depletion of scarce resources and harm to the environment.

Grantham delivered a non-stop, fire-breathing pitch, arguing that investing to save the planet is tomorrow’s best way to make money. The losers, he said, will be companies too short-sighted to join “the biggest movement in the economy and stock market since the carbonizing of the world.”

To open our conversation, Grantham declared that he’s too consumed by his environmental mission to predict the stock market’s future course. But he flayed today’s corporate leaders for for failure to take the big, daring bets—especially in what he sees as the green economy of the future.

No patience with caretaker CEOs

“Corporate leaders these days are fat sloppy and not as aggressive as they used to be,” Grantham told me. He contends that while they should be deploying their own R&D to find new game-changing products and technologies, “They’re afraid of painful write-offs. They wait to see if someone else succeeds, then come around in Round C or Round D of venture funding.” For Grantham, the practice of buying technology instead of doing it yourself leaves the big profits in the hands of venture capitalists, not companies: “That way, companies bypass volatility in earnings, and trade away future profits for stability and lower risks.”

Earnings careen through more big swings when companies develop pipelines of products in their own labs, he points out. Instead of risking the ride, CEOs take “a sweet and easy approach. Top executives wait peacefully for their stock options to appreciate instead of taking risks” that can generate super-sized gains and drive the economy to new heights.

The joys of venture capital

Grantham asserts that the “pullback of the giant corporate system” of developing products in-house has led to a four-fold expansion in venture capital, as companies effectively outsource R&D to the VCs. Even after that expansion,”The big picture shows that the opportunities in venture capital are ten times what they used to be,” he declares. “The venture capital sector is the last demonstration of true American exceptionalism.” That exceptionalism is nurtured by what he describes as “America’s death grip on the great research universities.” Of the top 20, he says, the U.S. has 15, and the rest of the world only five. For enterprising graduates, the most exciting career path is no longer a job on Wall Street. “It’s going to Stanford or MIT, getting a great idea, and starting a great company, and having fun, and getting rich,” says Grantham. “Venture capital is the most appealing option to the brightest and most risk-taking students.”

Productivity growth, he notes, is dwindling because of an aging population, meaning that GDP is destined to grow far more slowly than in past decades. But those limits don’t apply to clean energy. “The number of brilliant ideas for growth projects will be scarcer than normal, but you know that electric cars will crush diesel and gas, that wind and solar and battery storage will dwarf coal and gas-fired utilities,” Grantham says. “Upgrading the grid will produce much faster growth than sticking with the traditional grid.”

Ventures that promote energy efficiency in all its forms, he maintains, will grow faster than business as usual, including innovations in air conditioners, refrigerators and heating systems for buildings. “It’s the biggest movement of the economy and stock market since the carbonizing of the economy, first to coal then to oil,” says Grantham. “It will take trillions of dollars in new and profitable investments to convert the entire system,” says Grantham.

“If you fight this inevitable move, it’s the quickest way to go bankrupt,” says Grantham. The fossil fuel industry is sealing its own demise by failing to embrace green energy, and the oil giants constantly underestimate the growth rate of renewable sources, says Grantham, adding that, “I’d shoot any statistician who worked for me who made predictions that bad, and demand that the model be retooled. The oil and gas industries are fighting the wave, and with a little luck they’ll get drowned.”

Those oil and gas companies, he says, are sure to keep shrinking as long as they battle the green tide. “Look at the dismal performance of the oil industry in the past decade,” he says. “Oil companies have gone from 16% of the S&P [500’s] market cap to 5% in ten years. Moves of that magnitude seldom appear. Sure, you could get a dead-cat bounce from here. It will take 30 to 50 years from them to wend their way out of business, but wend they will.”

Grantham argues that the oil and gas giants could prosper by transitioning to green energy, but still would rather resist than switch: “If they stick to their wicked ways, they will do poorly. If they ride the wave, they could do quite well.”

No industry, he says, is more influential in trying to persuade the public that climate change won’t cause a crisis. “Oil companies knew what was going on since the 1960s and 1970s,” he says. “They deliberately confuse the public discussion by funding a small army of obfuscators, libertarians and others who deny the scientific facts.”

An accounting regime for the environment

Today’s accounting standards far understate what companies are costing society by using finite mineral supplies that can’t be replaced and polluting the world’s rivers and streams. Grantham argues that nations need to enact new rules that put those now-hidden burdens squarely on the books.

“The Bank of England is calling for the accounting industry in the U.K. to change its ways,” says Grantham. “If you postpone, you run into a brick wall. The whole finance field is terrible on the topic of use of energy resources. You need heat and wheat to make bread. If you produce the heat by using finite resources that are being depleted, you should pay for them, and also pay for the environmental damage from using those resources.” He cites Sir John Hicks, a prominent British economist from the 1950s, on the what constitutes real earnings: “Hicks defined real profit at the end of the year as what’s left when a manufacturer’s plants and equipment are as fresh and new and in as good shape as at the start of the year.”

Accounting charges should apply Hicks’ rule by imposing a “depreciation” charge for harm to the environment. “We don’t pay for the damage to all the insects that pollinate and propagate crops, for damage to rivers and streams, and damage in terms of climate gases,” says Grantham. “We’re not using honest and straightforward accounting that includes these costs.”

Under proper accounting rules, companies would book a charge for the costs of restoring the environment at the end of the year to its condition at the start of the year. “Try getting back the oil we’ve burned!” he argues. “We’re running out of all the most important metals, including cobalt and copper. We don’t account for the phosphorus and potassium reserves that companies deplete. There should be a replacement cost accounting hit for all of those.”

Grantham concluded our conversation with an astounding assertion: “The real cost of doing business hasn’t been adequately stated, and profits are grossly exaggerated.” He continued, “It’s not clear to me that the developed world would have made a true profit if industry had to pay for the damage to the environment.”

Under the Grantham manifesto, honest measures would reveal that if industries had to count such environmental costs as restoring the air and water quality to where it started each year, they’d make no money by the end of the year. Green energy won’t face those charges. And for Grantham, the big money will be green.