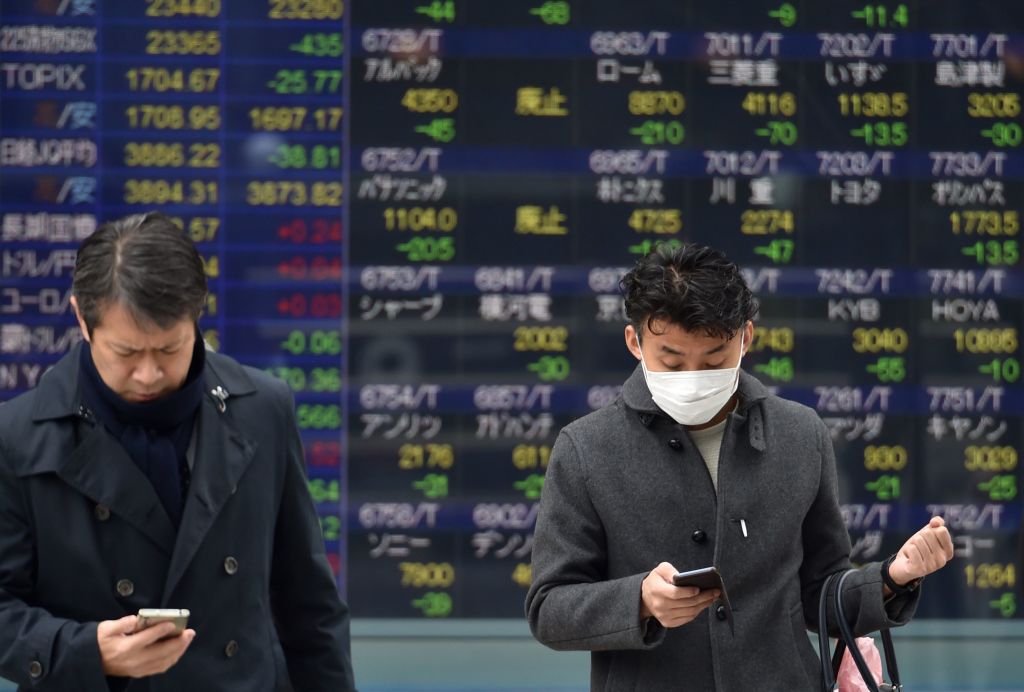 Pedestrians walk in front of an electric quotation board showing stock prices for Japanese companies on the Tokyo Stock Exchange in Tokyo on January 27, 2020. - Tokyo's benchmark Nikkei index dropped more than two percent January 27 on concerns over the potential impact of a new coronavirus that has killed at least 80 people in China. (Photo by Kazuhiro NOGI / AFP) (Photo by KAZUHIRO NOGI/AFP via Getty Images)
KAZUHIRO NOGI/AFP via Getty Images

Japan’s economy lurched toward a possible recession after taking another battering from a sales-tax hike in the last quarter that left it at a low ebb as the coronavirus outbreak hit activity at the start of 2020.

Japan’s gross domestic product shrank at an annualized pace of 6.3% from the previous quarter in the three months through December, the biggest slide since a previous tax increase in 2014, according to a preliminary estimate by the Cabinet Office Monday.

Economists surveyed had predicted a fall of 3.8%, flagging the adverse impact of the tax hike, weak global demand and typhoon disruption. The far worse-than-expected outcome showed that some of the government confidence in measures to cushion the blow of the tax hike was misplaced.

The result also raises the possibility that with the virus outbreak still spreading, Prime Minister Shinzo Abe may have to consider another round of extra spending to support growth, little more than two months after his most recent stimulus package.

“I’m getting ready for another contraction in Japan’s first quarter. There just aren’t any positive factors to build a positive growth forecast,” said Mari Iwashita, chief market economist at Daiwa Securities Co., flagging her view that the economy is likely falling into recession.

Iwashita expects the government to form another extra budget once it becomes clear the economy has stayed in a funk in the first quarter.

The Abe administration and the Bank of Japan had expected a smaller impact from the tax hike compared with the experience in 2014, when it buckled the economy by more than 7%. The tax increase this time was smaller, foods were exempted and the government deployed a raft of counter measures aimed at smoothing out fluctuations in demand.

But economists said some of the government steps, such as rebates on spending via cashless transactions, had limited impact as they didn’t appeal to an older segment of the population not used to mobile phone payment platforms. The figures laid bare the vulnerability of domestic consumption to sales tax hikes, according to Takashi Shiono, an economist at Credit Suisse Group AG.

The latest data showed private consumption plunged by an annualized 11% in the quarter, as households slashed their purchases of cars, cosmetics and domestic appliances. In 2014 the hit was 18%.

Businesses also scaled back investment by 14%, preferring to wait for signs of a recovery from the tax shock before committing to further spending.

While the initial trade deal between the U.S. and China should have offered a tail wind for investment this quarter, the unexpected virus outbreak may instead amplify caution in the boardrooms of Japan Inc.

“Concern over the virus is only intensifying and the mood of self-restraint is going to spread more broadly. I’m becoming downbeat on Japan’s economy,” Shiono said.

The virus has already stopped the visits of hundreds of thousands of Chinese tourists to Japan at the beginning of Japan’s Olympic year, hitting an important source of spending revenue. The longer the outbreak disrupts production and domestic demand in Japan’s biggest trading partner, the more likely Japan’s exporters will suffer and parts supplies may dry up.

Government officials stuck to their line that the tax impact on the economy was smaller this time than in 2014, but hinted that more spending could be in the pipeline if a slump looked certain.

“We will keep paying careful attention to the virus’s effect on tourism and the wider economy,” said economy minister Yasutoshi Nishimura in a statement. “According to the level of emergency, we will take necessary steps as needed in a flexible manner, and respond fully.”

Abe unveiled initial measures to counter the impact of the coronavirus last week, but so soon after releasing his economic package in December, he is likely to want to see harder evidence of a recession before mulling another large spending spree. Speaking in parliament on Monday he said the government would keep a close watch on the economic mpact of the sales tax and the virus.

While the BOJ has flagged its concern over the virus, it is also likely to emphasize the need for more data to assess the underlying trend. Given the growing side effects of its massive easing program and the relative stability of Japan’s currency, economists see additional action by the bank in the near future as unlikely.