When grief and work mix, there are no easy answers 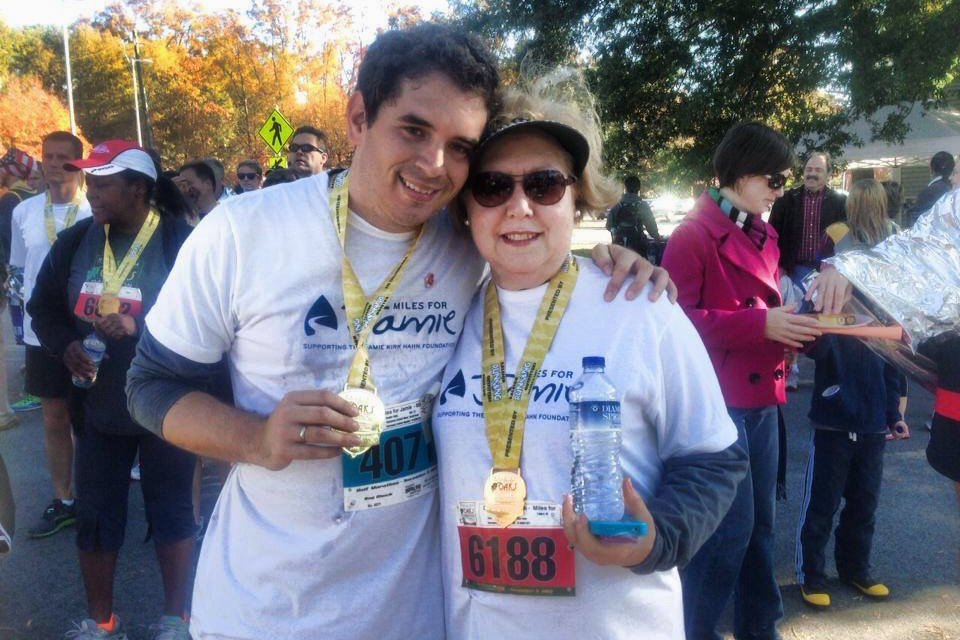 “I have often said, despite my misfortune, I had an incredible set of fortunate circumstances happen to me.”

If you knew Nation Hahn’s story, you might be surprised to hear him say these words. In 2013 his wife, Jamie Kirk Hahn, was attacked and killed by their longtime friend. Two years later, at the trial, Hahn testified against that friend, who was sentenced to life in prison. And through it all, as Hahn mourned his wife and made sense of his losses, he was the subject of intense media interest and scrutiny.

The misfortune that Hahn experienced is extreme. Still, he acknowledges his fortune—especially when it comes to work. At the time of his wife’s death, Hahn, then 27, worked at a small design and communications company. His employer didn’t have a bereavement policy “but decided to go all in on creating a safe and supportive space,” Hahn said. He took three months off work, then slowly returned to the office and his duties.

“They allowed for a very slow on-ramp back to work,” Hahn explained, “months and months of on-ramp, working 20 to 30 hours a week, where they gave me room to be inconsistent, as I wove my way through grief and also through efforts to memorialize Jamie.”

Hahn trained for a half-marathon in his late wife’s honor, joined the boards of several nonprofits, supported other causes she believed in, and coordinated various volunteer efforts and days of service in Jamie’s name. His efforts later earned him a spot on Southern Living magazine’s “Southerner of the Year” list.

“I worked really hard, but it wasn’t work for pay,” Hahn said. “I understand how privileged I was to do that.” Thanks to his employer’s flexibility, Hahn was allowed “to really and truly lean in on grief and to understand bereavement in its fullest form,” he explained. “For me, that was ideal.”

This is the kind of awareness and understanding that psychotherapist, writer, and grief advocate Megan Devine supports. Just as there’s not one right way to grieve, there are multiple ways to approach returning to the workplace after the death of a loved one. Grieving employees may return to the office and want their coworkers to acknowledge the loss. Others would prefer not to talk about it, and some people might decide to take extended time off or to quit their jobs.

“Some people do need the distraction of work. They need something outside of their own personal sphere to focus on in order to survive—and I don’t just mean financially—I mean emotionally, intellectually,” Devine said. “There are also people who go back and are like, ‘I can’t believe I have to do this.’”

Devine knows how difficult it can be to face work after loss. In 2009, her partner of five years, Matt, died in an accidental drowning. Devine quit her private practice as a psychotherapist, and the publishing company that she also worked for put her on leave, keeping her insurance and other benefits intact. It was an optimal situation, one that she wishes every grieving person could experience.

“I was privileged in that I didn’t have to go right back to work,” she said. “Not everyone has that option. So it’s not like there’s a binary of you choose to quit work, or you go back and bury yourself in work. Because there are a lot of people who would love to not go back, but have to.”

For the employees who do return to work after the death of a loved one, there’s plenty to navigate, including how to interact with coworkers, how to talk (or not talk) about the loss, and, in some cases, how to adjust to the cognitive effects of trauma. Experts like Devine say it’s beneficial for companies to have a policy in place—not only for bereavement, but for handling grief.

“This is my personal bandwagon in the corporate world,” Devine said. “We have bereavement policies, but we don’t have grief-in-the-workplace policies, and we should.”

We have bereavement policies, but we don’t have grief-in-the-workplace policies, and we should.

Discussions on how to best support bereaved workers should happen at the HR level, Devine says. She recommends identifying a point person—either an HR representative or a boss— to get in touch with the employee ahead of returning to work. “Together, they can assess the employee’s level of comfort in coworkers addressing their loss,” Devine explained. “The point person can then communicate with the team about what that employee needs.”

In her 2017 book, Option B, Facebook COO Sheryl Sandberg advocates for better bereavement and grief support in the workplace—and makes the financial case for doing so. Sandberg, who lost her husband in 2015, noted that just 60% of private sector workers get paid bereavement time, and usually only a few days. When they do return to work, grief can interfere with their job performance—something she experienced firsthand.

“The economic stress that frequently follows bereavement is like a one-two punch,” Sandberg wrote. “In the United States alone, grief-related losses in productivity may cost companies as much as $75 billion annually. These losses could be decreased and the load could be lightened for people who are grieving if employers provided time off, flexible and reduced hours, and financial assistance.”

For people who do return to the office after loss, work will be markedly different. Interacting with coworkers may be difficult, caring about seemingly small problems might be challenging, and it will likely be harder to concentrate on tasks than usual.

“People who are grieving have to find a way to give themselves space to fully experience the range of human emotion,” said Hahn. “One of the things I’ve realized is that if you’re a relatively high achiever who works hard and cares about work, finding yourself unable to perform at the same level for a period of time—or even finding yourself not wanting to perform at that level for a certain period of time—feels wholly uncomfortable.”

The cognitive effects of grief are temporary, Devine added. “But it lasts much longer than you would think. It’s not something you spring back from.”

In Option B, Sandberg recalls sitting in on meetings where she made multiple mistakes, caught herself rambling, and in one case, nodded off. Still, “I returned to work to work the next day. And the next day. And the days after that,” she wrote. “But on so many of those days, my grief prevented me from thinking clearly. In the middle of a meeting, an image of Dave’s body on that gym floor would flash before my eyes. It was like augmented reality—I knew that I was in a Facebook conference room, but it felt like his body was there too. Even when I was not seeing his image, I was crying constantly. Lean in? I could barely stand up.”

Hahn, Devine, and Sandberg all stress how important it is to be patient—whether you’re the one grieving or you’re working alongside a grieving coworker. With time, the effects of loss will fade, and addressing the situation early on will benefit everyone involved.

“Everyone’s grief journey is different,” said Hahn, “and that includes their experience with work.”

For those mourning a major loss, it can take years to fully reconnect with work. Once that shift happens, though, many people find themselves drawn to more fulfilling or impactful jobs.

In 2015—two years after his wife’s death—Hahn joined EdNC.org as its chief growth Officer. “I was able to finally find a work project that felt both connected to the issues that Jamie and I cared about but also felt like something I could make my own,” he said, adding that his role at EdNC is “also something that could be shaped profoundly by the experience of grief.”

Devine returned to clinical work five years after losing her partner. Since then, she’s written the book It’s OK That You’re Not OK and runs Refuge in Grief, an online community and grief resource. “I came back because I’m good at what I do, and I knew I could make things better for grieving people,” she said.

Returning to the office and taking on more fulfilling work carries its own challenges. It’s common for people to feel guilty as they experience success, knowing their deceased loved ones no longer get that opportunity. “It is almost every day that I look at what I’ve built in this business and know that it’s only here because Matt’s dead. I never forget that,” said Devine.

Still, she added, it’s important for grieving people not to punish themselves for achievements post-loss. “I have a beautiful life, and Matt’s dead. Both of those things are true.”