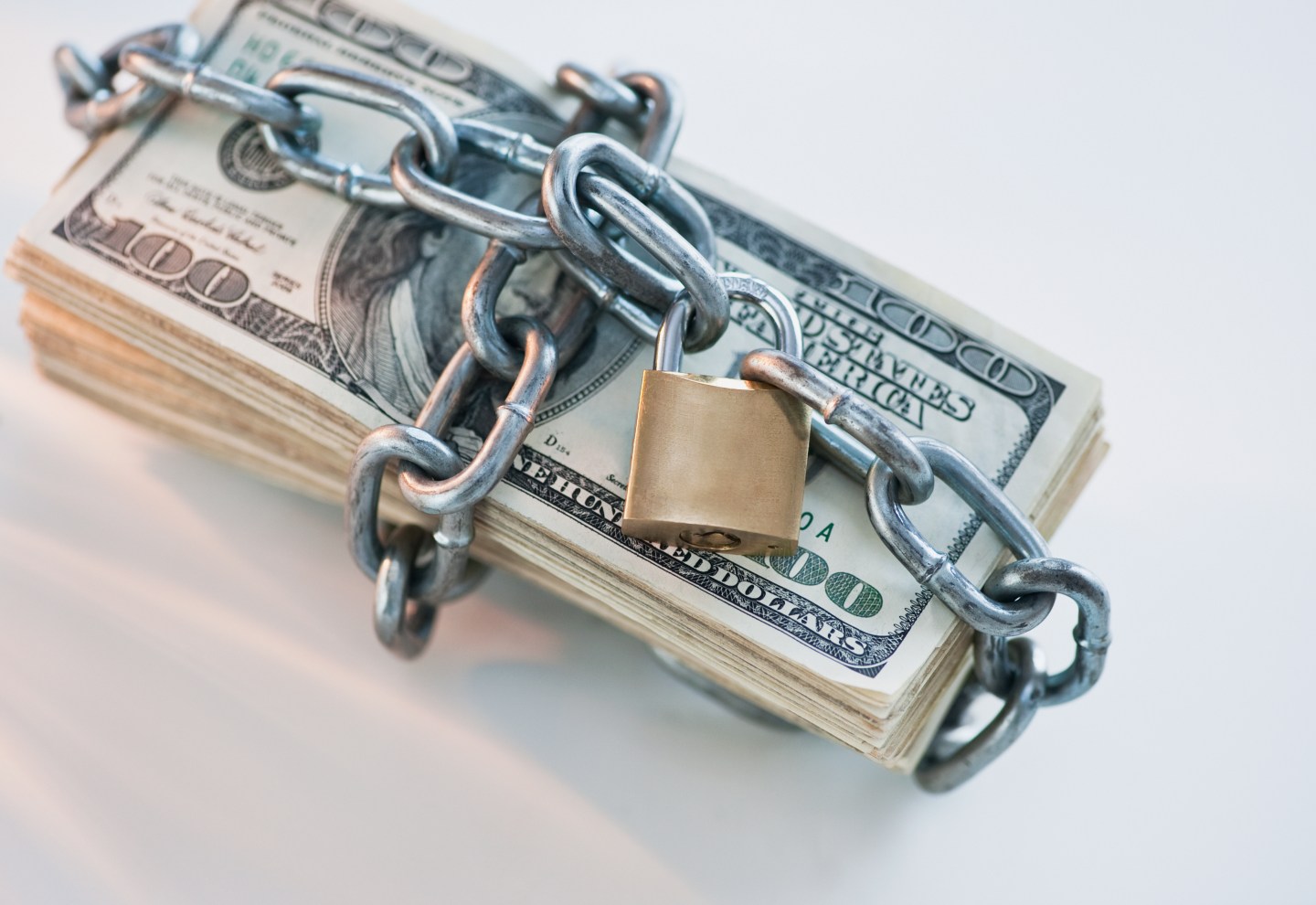 For all the talk about so-called “direct listings” and their potential to transform the capital markets, the fact is that—other than the stock market debuts of Spotify in 2018 and Slack in 2019—such deals have remained few and far between.

One major reason why? It’s all about the Benjamins—and, specifically, the inability of companies to raise them through direct listings.

Yes, the new paradigm provides companies and their private equity investors with another avenue to the public market that avoids some of the more inconvenient trappings of an initial public offering. Unlike traditional IPOs, there are no sprawling consortiums of underwriters who command hefty fees, nor customary “lockup” periods during which existing shareholders are prohibited from cashing in their stock.

But direct listings also don’t allow companies to raise fresh capital through the issuance of new shares; instead, it is existing investors whose “secondary” shares are being floated on the public market. While that helps the issuers avoid further dilution of their stock, it also limits the pool of companies that would consider a direct listing. For most firms, going public is still about tapping new capital from public investors—and in that regard, direct listings remain inadequate.

“There are sectors, like life sciences, where companies are going to be hesitant to forgo the opportunity to raise money [via a public issuance].” says David Peinsipp, a partner at law firm Cooley and co-chair of the firm’s global capital markets practice. “It’s been the most obvious limitation of direct listings; super balance sheets like Spotify and Slack have done it, but 90% of companies are still going to want to raise money if they can.”

The major stock exchanges and investment banks are well aware of this dynamic, and are now making an effort to address it. Last month, it emerged that the New York Stock Exchange filed a proposal with the U.S. Securities and Exchange Commission that sought to allow companies to raise new capital via direct listings, rather than only offering existing investors’ secondary shares for trading.

The SEC, however, promptly rejected the NYSE’s proposal. Though it’s unclear what specific issues the federal agency wants the exchange to address, multiple sources told Fortune they believe the SEC has reservations over whether the direct listings model offers investors with the requisite regulatory protections that traditional IPOs provide.

“The SEC has to make sure that what the [NYSE] wants to do is allied with the existing rules that the SEC has, and that it is in the best interest of public shareholders,” says Linda Killian, principal at institutional research firm Renaissance Capital.

Jay Ritter, a professor of finance and eminent scholar at the University of Florida’s Warrington College of Business, notes that the SEC will be concerned about potentially providing companies with “a backdoor way of getting around some investor protection regulations.”

“The SEC has been somewhat careful to make sure they’re not opening a door where, two years from now, there are [instances of] fraud that are going to cause some embarrassment,” Ritter says.

Despite the SEC’s initial rejection, the NYSE continues to be in discussions with the regulatory agency over a framework allowing primary capital raises through direct listings. The exchange wasted little time in filing an amended proposal to the SEC that lowered the minimum amount of stock that companies would have to sell in a direct listing to $100 million (from $250 million in its initial proposal).

“The NYSE is the home of direct listings, executing the first two ever completed,” John Tuttle, vice chairman and chief commercial officer at the NYSE, says in a statement to Fortune. “We now have a proposal before the SEC to evolve our innovative offering, which leverages the power of the NYSE trading floor and established processes similar to those seen in an IPO.”

Nasdaq is also exploring its own proposal to the SEC on direct listings. In a statement, a Nasdaq spokesperson says the stock exchange has “had extensive conversations with potential issuers and their advisors, financials institutions, and the SEC about the possibility and mechanics of a direct listing with a primary capital raise, and we intend to file changes to our rules that would allow direct listings with a primary capital raise.” (Interestingly, Nasdaq adds that it does “not believe that the proposed rule change filed by the NYSE fully considers the complexity of the issue.”)

Representatives for the SEC declined to comment. But how the SEC decides to proceed in the coming months could determine whether direct listings are here to stay—or end up consigned to the Wall Street history books as yet another brief fad.

As evidenced by the Spotify and Slack issuances, the direct listing model has gained traction among tech unicorns and the private investors that helped them attain $1 billion-plus valuations. These days, such companies are often awash with privately raised capital and have little need for fresh funds via their public market forays. Rather, they’re more attracted to the prospect of allowing investors and shareholders (including, in many cases, their own stock-holding employees) reap the benefits of their positions by liquidating some, or all, of their equity stakes.

“High-growth tech companies are in the business of change and doing things in new and innovative ways,” according to Goldman Sachs managing William Connolly, who heads technology equity capital markets for the investment bank. “To some extent, there’s a natural affinity towards exploring a better way of doing something, and a willingness to try something different.” In a market where many tech firms have delayed going public in favor of staying private, Connolly notes that direct listings are an interesting route for those who care more about a path to liquidity than raising new capital on the stock market.

But for some, the fact that direct listings eschew many of the procedural, would-be safeguards of the traditional IPO process—such as underwriter-helmed roadshows that familiarize investors with companies, as well as the role of investment banks as “stabilization agents” able to buy excess shares and keep a stock’s price in check—elevates the risk for companies and public investors alike.

While Spotify and Slack are large, highly visible firms recognized by many investors, Killian believes the direct listing process “may work less well for companies that are not so well-known.”

“Think about a smaller tech or consumer company: the book-building process that underwriters do is very important to introducing a small company, getting the name out, having a roadshow, and generating [investor] interest,” she says. “Yes, [advisory fees are] cheaper—but at what cost?”

Some observers have speculated that direct listings pose a threat to investment banks’ traditional capital markets advisory businesses, since they break up the need for large teams of underwriters who can command tens of millions of dollars in fees for shepherding an IPO to fruition. With no need for underwriters, companies instead work with a much smaller team of advisors who, on aggregate, command significantly lower fees.

But multiple banking and legal sources who spoke with Fortune say the big banks have embraced direct listings as a welcome evolution of the public markets—one providing them with a new path to take companies public and develop long-term relationships with would-be issuers. Goldman Sachs’ Connolly notes that investment banks “continue to play an incredibly important role” in advising issuers on direct listings, including helping the company “tell its story” to investors and present its financials.

“I think the investment banks are genuinely excited about direct listings overall; they understand that the market changes, and they have to change with the market,” according to Daniel Forman, a partner at law firm Proskauer’s capital markets group. “Having a smaller group of advisors working more closely with an issuer can help banks build and maintain relationships resulting in additional opportunities to work with that issuer.”

Not everyone agrees. Ritter says he doesn’t buy the idea that Wall Street banks are thrilled about their altogether diminished role in direct listings—since they’re not able to “allocate underpriced shares to clients like hedge funds, who are willing to pay high brokerage fees to get those allocations,” he notes.

To lockup, or not to lockup?

Complicating any designs on allowing companies to raise fresh capital via direct listings is the matter of lockups. A customary feature of IPOs, they’re meant to control the supply of shares in the wake of a company’s offering by prohibiting existing investors from dumping their stock on the market, usually for up to six months after an IPO.

Since direct listings exclusively consist of secondary shares owned by existing investors, they render lockups moot. But it is worth asking how a direct listing featuring the issuance of primary shares would fare without a construct long used by underwriters to keep IPOs on course.

It’s unclear whether the absence of lockups in direct listings is a sticking point in the SEC’s deliberations over the NYSE’s proposal. But the very question about what to do with lockups—and the extent to which their unpopularity among existing investors has spurred the relevance of direct listings—has led some to suggest that a rethink is in order.

“It’s tough for an investment bank to do a normal IPO and tell their clients on the buy side that they should buy this stock, but not protect them from a large delude of capital for some period of time,” says Greg Rodgers, a partner at law firm Latham & Watkins. “That said, six months [for a lockup] seems way too long in this day and age.”

Rodgers predicted that the rise of direct listings could result in “more creativity around partial [lockup] releases” in traditional IPOs, whereby different investors are gradually allowed to sell their shares on the public market in an altogether shorter timeframe. Ritter agreed, noting that “the idea that every company should have a one-size-fits-all, 180-day lockup [period] isn’t necessarily all that appropriate.”

Whether direct listings establish themselves as a mainstay on the capital markets, or eventually fade into obscurity as a temporary trend (like the “Dutch auction” model that Google used to go public in 2004) remains to be seen. Santosh Rao, head of research at Manhattan Venture Partners, says direct listings have been primarily driven by an “abundance of liquidity in the private markets,” and predicted that when the private funding markets dry up, direct listings will go “out the window.”

But what seems apparent is that, more than ever, companies, investors, bankers and attorneys alike are considering more varied ways to make money on the public markets—and, with the SEC’s blessing, that could significantly change the way business is done on Wall Street in the years to come.

“Going forward, we’ll see more bespoke approaches and variations on the direct listing model, and traditional IPOs could look very different as well,” according to Proskauer’s Daniel Forman. “We’ll see a shifting landscape about what it looks like to go public.”

Updated, Jan. 16, 2020: This story has been updated to include comment from the NYSE.

—Forget policymakers. Greta Thunberg and her allies are targeting CEOs
—Investors see a 2020 recession coming—but think they’ll make money
—The Carlos Ghosn affair: A look inside the motivations of a fugitive CEO
—What $1,000 in 10 top stocks a decade ago would be worth today
—Laws meant to close down tax havens and shut loopholes could have opposite effect
Subscribe to Fortune’s forthcoming Bull Sheet for no-nonsense finance news and analysis daily.